Unicorn want-to-believe creature
Undoubtedly, Unicorn has been an inspirational want-to-believe creature for many centuries, for ordinary people, monarchs, artists, and even scientists. Noteworthy, the earliest images of unicorns are more than 4 thousand years old, found in India. Also, they appeared in the myths of Western Asia.
Meanwhile, in ancient Greece and Rome people considered unicorns real animals. Interestingly, the images of unicorn present on the Egyptian monuments, and on the rocks of southern Africa.

Scottish tapestry collection – The Hunt of the Unicorn

According to European folklore, the legendary animal unicorn – a white horse with a large, pointed, spiraling horn projecting from its forehead.

The ancient Greeks first mentioned about Unicorn, an extremely wild woodland creature, a symbol of purity and grace, which could only be captured by a virgin.

Until the XIX century, belief in unicorns was widespread among physicians, historians, alchemists, theologians, writers, poets, and naturalists.

The gold Russian coins depicted Unicorn since the time of the great Prince of Moscow Ivan III and ending the reign of Tsar Alexei Mikhailovich Romanov. Since 1562 unicorn was depicted on the breast of double-headed eagle on a par with St. George, so in this era was the semantics of peer.

Unicorn symbol contained in bilateral state seal of Russian Tsar Ivan the Terrible: Large (from 1562) and Minor (from 1571), as the Great Seal of the kings of Boris Godunov, False Dmitry, Michael’s, Alexis, on the seal of the Grand Palace during the reign of Mikhail Fedorovich. Seal with a unicorn fastened letters of Ivan the Terrible, such as correspondence with Cyril-Belozersky monastery.

Also depicted on the back of the throne of Ivan the Terrible, the ceremonial axes, seat, window casings palaces, on the arms of Russian noble families. In particular, the Batashevs, the Bonch-Brueviches, the Verigins, the Kudryavtsevs, the Mansurovs, the Ostafyevs, the Romanovsky, the Strekalovs, Turgenev, and Shuvalov. Unicorn – included into Emblems of Boltin, Yermolov, Kozlovsky, Saltykov, and Loris-Melikov.

A new possibility for the inspiration of the unicorn came in 2008 with the discovery of a roe deer in Italy with a single horn. Single-horned deer are not uncommon; however, the placement of the horn in the middle is very unusual. The placement of the horn could have been the result of some type of trauma in the life of the deer.

The Maiden and the Unicorn 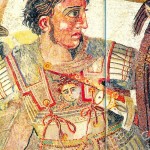 At the waterfall, Unicorn 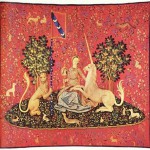 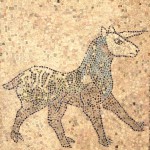 Mosaic on a church floor in Ravenna, unicorn 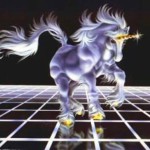 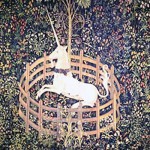 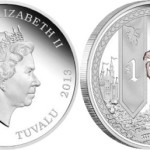 Australian Mint in Perth for the government of Tuvalu in March 2013 introduced a new coin series “Mythical Creatures”, which depicts a unicorn 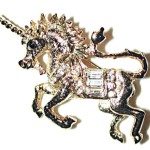 The equatorial constellation lies in the Milky Way – Unicorn 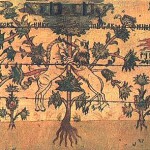 Headrest of Nikita Ivanovich Potapov. Northern Dvina. 1688. Confronting the Unicorn and Lion near the World Tree symbolizes the summer solstice 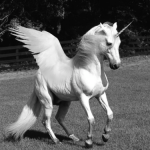 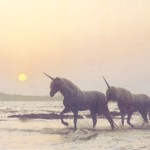 A couple of unicorns