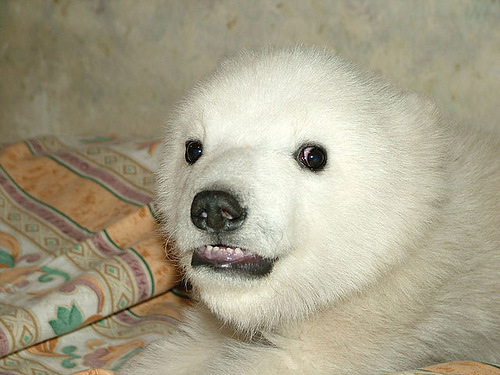 This adorable polar bear cub was very weak from hunger but managed to regain his strength and festiveness. He briefly lived in an airplane hangar and then in an apartment before being given to the Moscow zoo. (P. S. In Russian language, any animal is “he”, or “she”, not “it”).
Meanwhile, there is an evidence that the first polar bear appeared in Moscow Zoo 1871. Besides, in 1884, Emperor Alexander presented two more polar bears to the zoo . 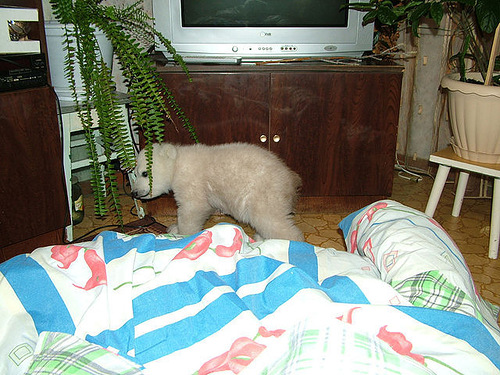 He briefly lived in an airplane hangar and then in an apartment before being given to the Moscow zoo.

According to scientists, too early weaning from the mother Young mammals may lead to a breach of ontogenesis (formation) of a species-specific behavior. In fact, young polar bears in nature become independent only by the age of two years. While the formation of normal behavior occurs in the interaction with the mother. And in terms of adequate external stimulation, it is natural environment that provides it.

Over the lifetime of the zoo it was only a very short period when they did not keep polar bears. There is an evidence that the first polar bear appeared in 1871. In 1884, Emperor Alexander presented the zoo two more polar bears. The cubs were born, but unfortunately, due to concerns on the part of people their mother refused to nurse, and the first born in captivity cubs died. In subsequent years, the zoo got mostly cubs, brought from the polar stations. In 1938 the zoo held simultaneously 8 polar bears. From them were obtained and grown offspring. In the grim years of war the zoo enthusiasts have made a truly heroic effort to save the animals, but some of them still died in the bombing. At the beginning of 1945, the zoo took another teddy bear as a gift from the famous polar explorer Papanin.

Now in the zoo there are three adult polar bears, only one of which was born at the zoo, and the rest were left without parental care, picked up and transferred to the zoo by the winterer from Wrangel and Chukotka. They are kept in two cages, one of which, in addition to the obligatory swimming pool, has a plant Installation – a gift of the Moscow government, and it decorate lives of the furry pets. Bears like to rest near a snowdrift where they hide the remnants of a meal, and their children are happy playing in the snow.

Females live each in her cage, the expectant mothers are disturbed as little as possible. The cubs appear in October and November, but the zoo visitors can see them in cages until February. The first 3-4 months of life, as it should be all the cubs spend with their mother in the den. At the age of about one year, bears go to other zoos.

Feeding of polar bears in the zoo is very diverse. They prefer meat to everything else, and like fish, mainly large. From a variety of vegetables and herbs, bears especially like green salad. They eat various cereals as well.

Moscow Zoo website states: “Of course, life in the zoo is better than in nature, but also more boring. “Outsiders” the objects you see in aviaries – toy bears. If you will not find the bears sleeping, then it is very likely you will see them playing”.

The company “Rosneft” took custody of all polar bears kept in zoos in Russia. In addition, the company conducts research in the Arctic, polar bears as part of expeditions “Kara-Winter” and “Kara-summer.” Experts zoologists supply animals with collar with satellite sensors to track their range. Also conducted biological research to assess the impact of environmental change on polar bears. 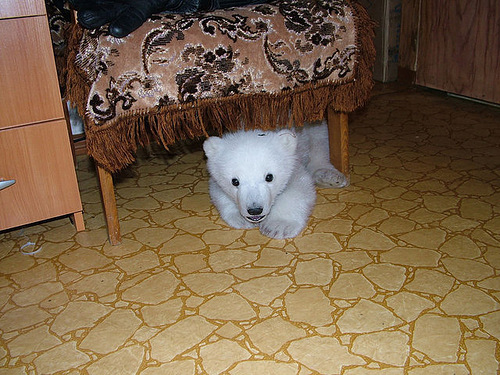 At first, the bear cub was very weak from hunger but managed to regain his strength 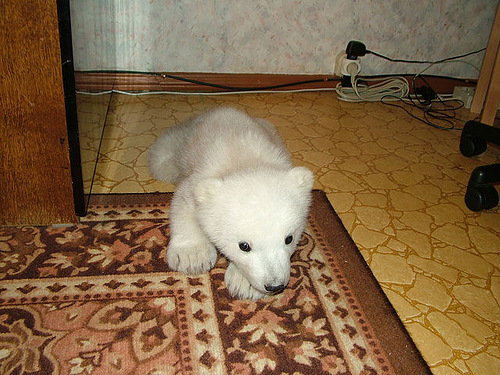 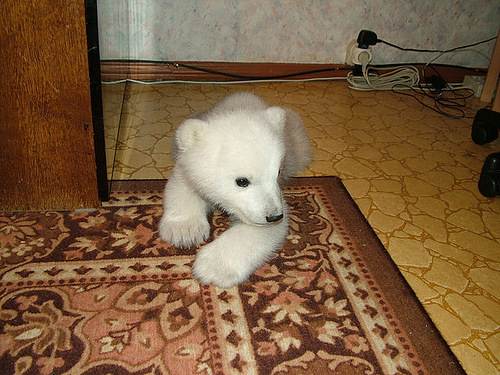 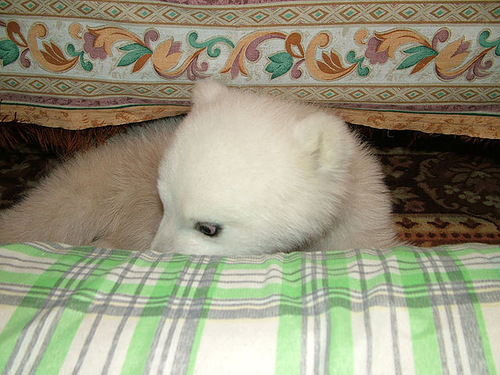 In his bed – bear cub 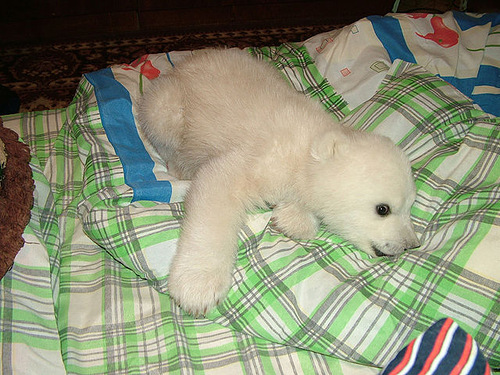 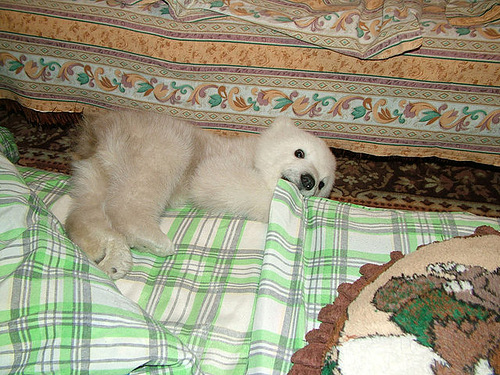 Playing in his bed bear cub 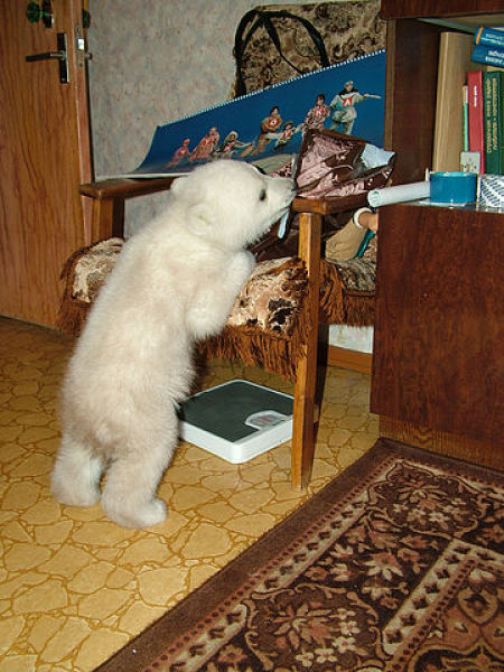 Living in an apartment bear cub 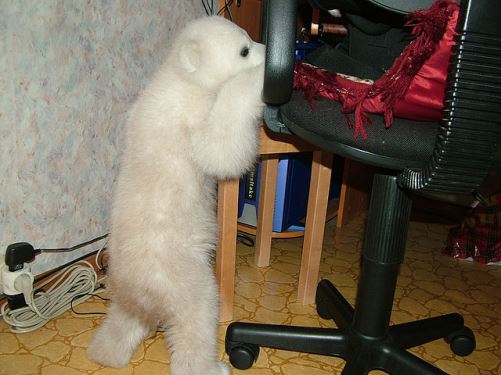 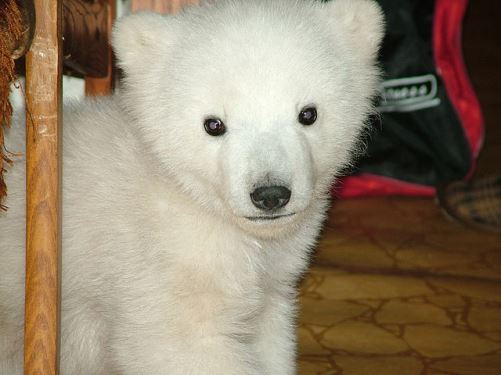