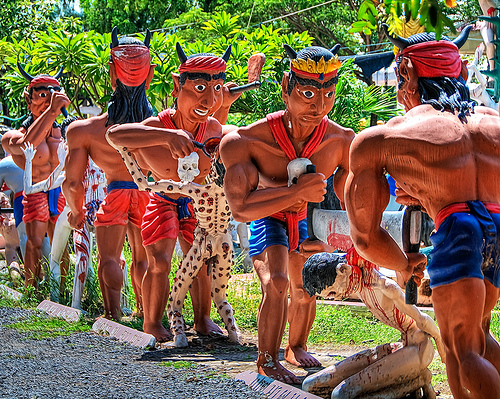 Wang Saen Suk Hell Garden
Noteworthy, it is the largest garden in Thailand, hidden down a quiet lane not far from the coastal resort of Bang Saen. Located 90 minutes drive south of Bangkok, at the entrance of the monastery garden is a brightly colored sign welcoming you To Hell. Beyond lies a garish, and in-your-face morality tale of sawn torsos, boiling vats and devilish figures tormenting worldly sinners. “If you meet the Devil in this life, don’t postpone merit-making which will help you to defeat him in the next life.”
In fact, Wat Wang Saen Suk monks created their vision of hell in shock-horror sculpture garden 20 years ago. At the start of the garden trial – installed a giant “fat Buddha” statue. In addition, there are numerous cement-and-plaster statues depicting life in a Buddhist hell, found throughout the garden. Buddhist hell features in particular, two large figures named ‘Nai Ngean’ and ‘Nang Thong’. Besides, standing high above the tortured souls of the garden the ‘hungry ghosts’ of Thai folklore have long necks and distended bellies. 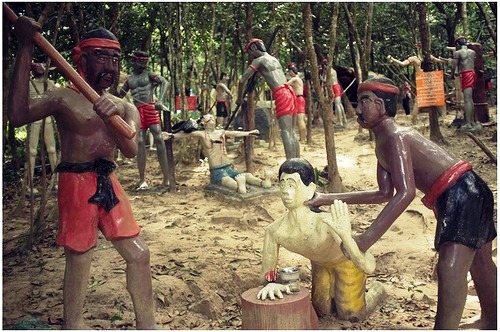 The place for the sinful – Hell Garden in Thailand

After this first area come illustrations of the specific punishments for a list of very particular crimes. Every form of punishment is a torture. These include depictions of human sinners being ripped apart by the dogs of Hell, burnt alive in boiling cauldrons, disemboweled by birds, and having their head replaced with that of an animal. 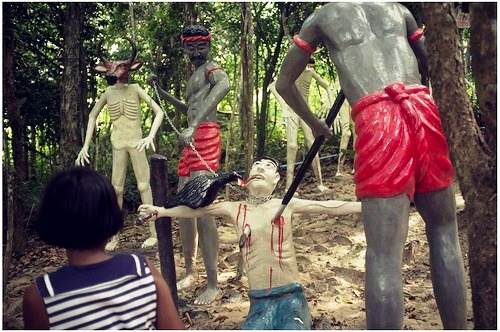 Donation boxes located next to each scene encourage penance through charity. They also detail the sins likely to incur the depicted torture; these range from a woman being crushed in a vice for committing aborticide, to a man having his head savagely knocked off for undermining Buddhism. 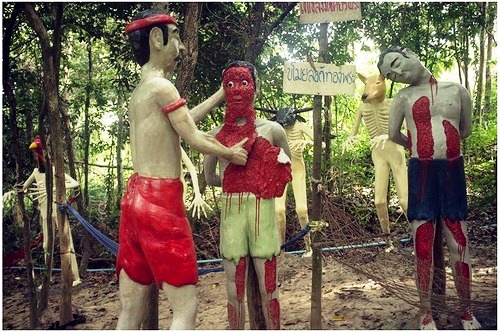 Punishment in hell varies in ways and degrees of harshness according to the sins committed. Every form of punishment is a torture. Hell has a large number of pits; eight large ones with 16 attachments each. That makes 136 pits altogether. The one that is most commonly known is “avici”. This pit is at the bottom. However, even those who are sent here still have a chance to be reborn some day. 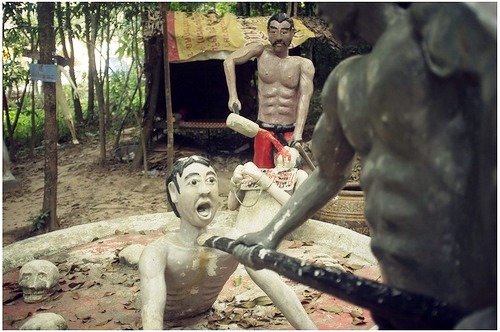 Apart from these 136 pits, there is a special one called Loganta. It is pitch dark and extremely cold (unlike all the other pits which are extremely hot). Those who have hurt their parents or monks physically will go to this pit and will remain there until the end of the Buddhist era (until a new Buddha is born on earth).

The Wat (temple) Wang Saen Suk Hell Garden is a sort of unsavory Buddhist theme park with a message. Judgement is black and white; punishments are swift, painful and gory. 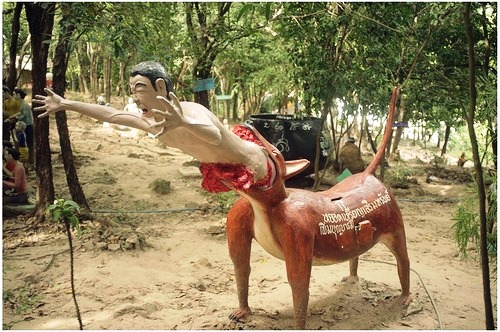 An unknown animal swallowing a sinner. Hell Garden in Thailand 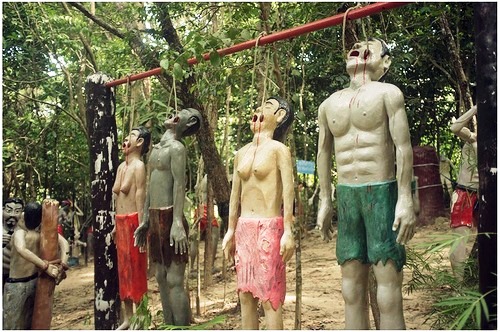 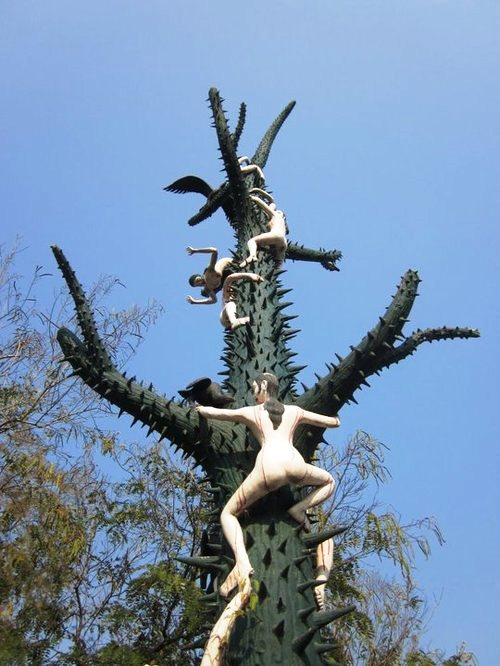 Naked people on a prickly tree 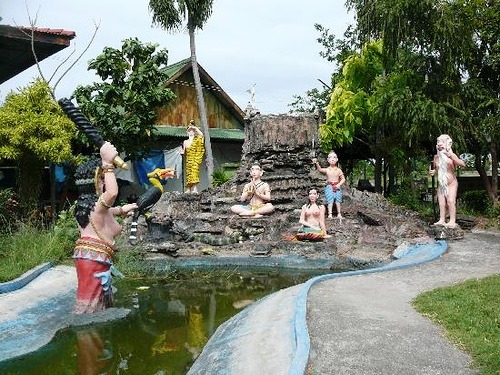 Sculpture in the Hell Garden in Thailand 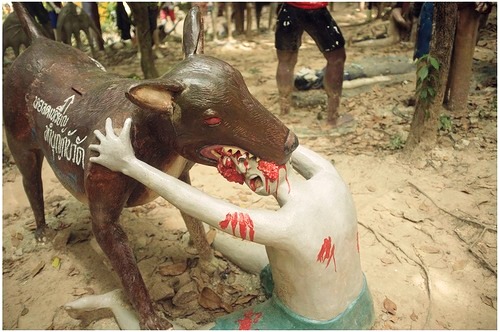 A frightening scene of an animal eating man’s head. Hell Garden in Thailand 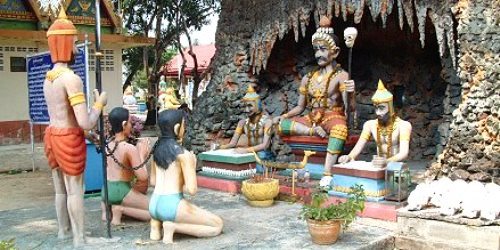 A couple of sinners standing on kneels in anticipation of the verdict of the judges. The Hell Garden in Thailand 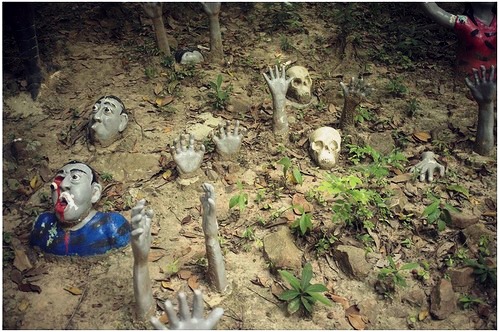 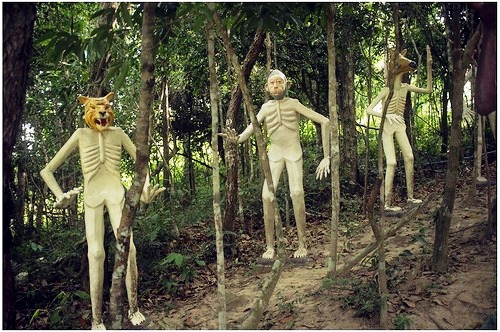 Zombies in the Hell Garden in Thailand 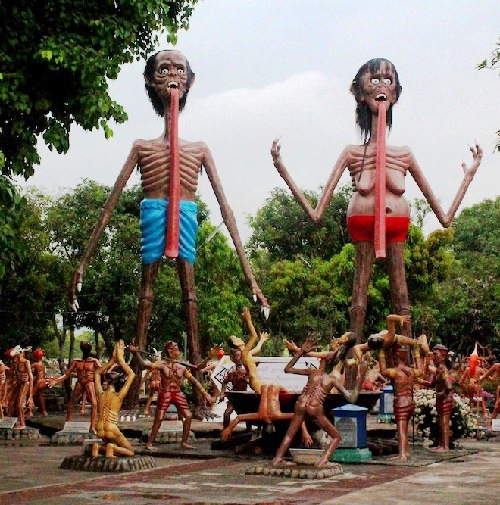