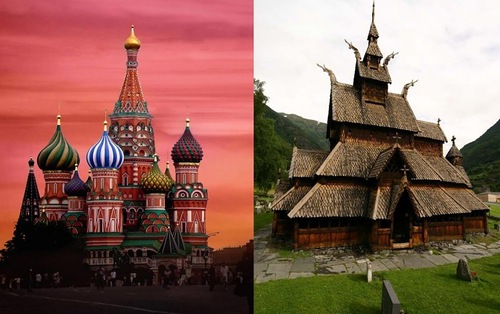 World most interesting churches
World’s unique churches demonstrate an amazing architectural diversity, and their rich and ambiguous story shows that with the construction of temples began and spread all the architectural innovations, all new styles and trends throughout the world. Majestically survived the cult structures of the great civilizations of the ancient world. To the masterpieces of ancient architecture also added several modern religious constructions with an amazing design. 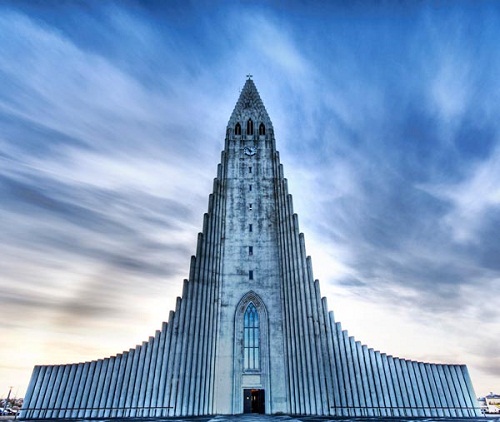 Evangelical Lutheran Church. Lutheran Church in Reykjavik is the fourth-tallest building in Iceland. The Church project was developed in 1937 by architect Gudjoun Samuelson. The construction of the Church lasted 38 years. The Church is situated in the Center of Reykjavik, and is visible from any part of the city. It was one of the main attractions of the city, and is also used as a watch tower. 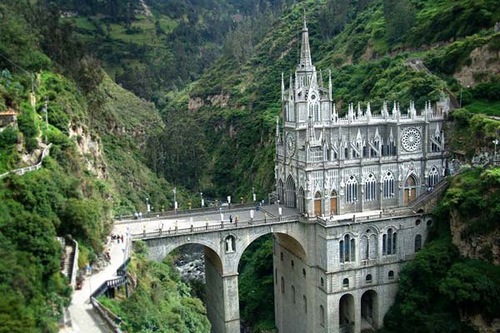 El Santuario de la Virgen del Rosario de Las Lajas en Ipiales. The current church was built between January 1, 1916 and August 20, 1949, with donations from local churchgoers. It rises 100 m high from the bottom of the canyon and is connected with a 50 m tall bridge to the opposite side of the canyon. Thus, the Cathedral has become the key to peace and Union between the two South American Nations. 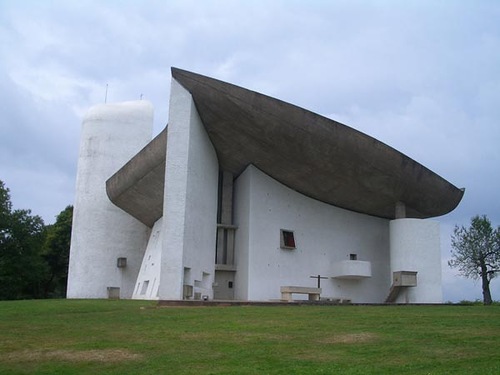 Notre-Dame-Du-Mont. Concrete pilgrimage church, built in 1950-55 in the French city of Ronshan. The architect Le Corbusier, not being religious, agreed to the project, provided that the Catholic Church would give him full freedom of creative expression. Originally the building was non-standard, violent protests by locals who refused to serve in the Temple of water and electricity, but tourists who come to look at it, became one of the main sources of income. 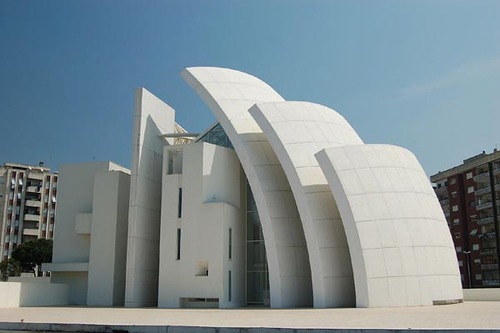 Jubilee Church. The Church of Merciful God the father is a Community Centre in Rome. It was built by the architect Richard Meier in 1996-2003, in order to enliven the life of residents of the region. The temple is built of precast concrete in the triangular area on the edge of the City Park, surrounded by a 10-story residential and public buildings of about 30000 inhabitants. 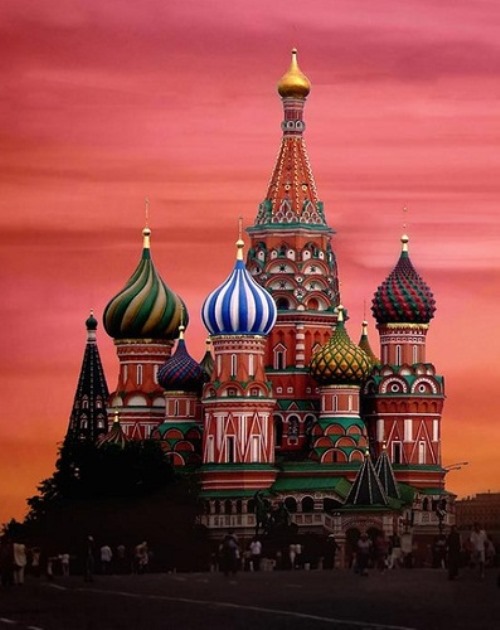 St.Basil’s Cathedral. An Orthodox Church is located on red square in Moscow. Widely known monument of Russian architecture and one of the most famous attractions of Russia. Was built in 1555-1561, at the behest of Ivan the terrible to commemorate the victory over the Kazan Khanate. According to legend, the architects of the cathedral were blinded by order of Ivan the terrible, so that they were not able to build anything like that. 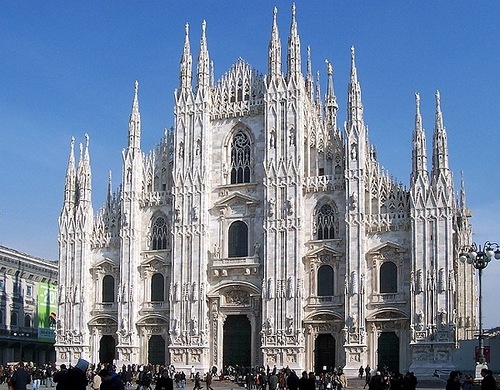 Milan Cathedral. World famous fourth-largest church in the world, located in the Centre of Milan, its symbol. Includes a forest of spires and statues, marble pointed turrets and towers. White cathedral was built over 5 centuries ago. 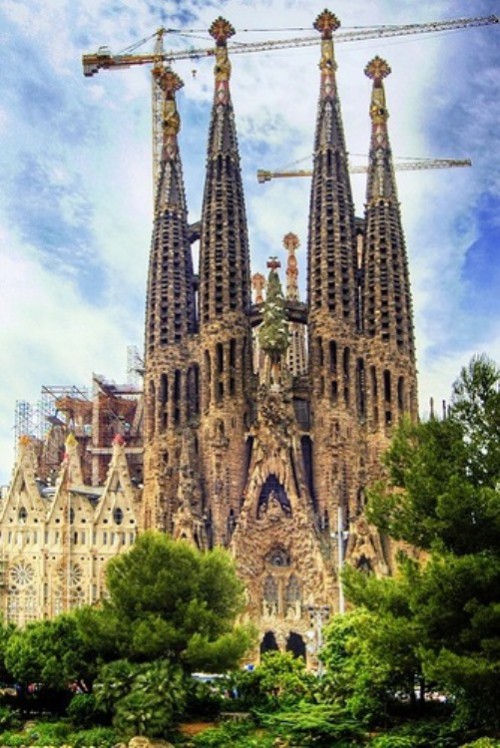 Church of the Holy Family. World most interesting churches

Church of the Holy Family. Church in Barcelona, which relies on private donations from 1882 onwards, this is a famous project. The unusual appearance of the temple made it one of the main attractions of Barcelona. However, due to the complexity of manufacturing the stone structures, the Cathedral will be built until the year 2026. 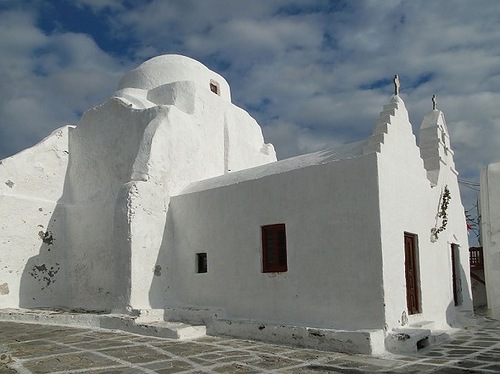 Church of Paraportiani. Dazzling white Church is located on the Greek island of Mykonos. The temple was built in 15-17 centuries and consists of five separate churches: the four churches are built on the ground, and the fifth is based on these four. 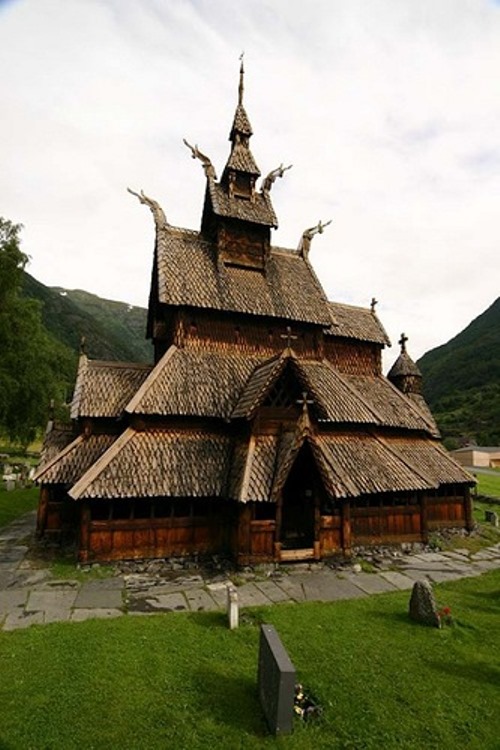 Urnes Stave Church. One of the oldest surviving timber frame churches in Norway. Metal parts in the construction were not used. A number of parts that make up the Church, more than 2 thousand. Solid frame was landed on Earth and then raised to a vertical position with the help of long poles. Stave Borgunne allegedly built in 1150-80 ‘s.

Cathedral of Blessed Virgin Mary. The Cathedral of the Catholic Archdiocese of Brasilia was built in the style of modernism by renowned architect Oscar Niemeyer. In 1988, the Oscar Niemeyer has received the Pritzker Architecture Prize for the project of the Cathedral. The building consists of 16 columns, symbolizing the hyperboloid hands stretched to heaven. Space between tie closed with stained-glass Windows. 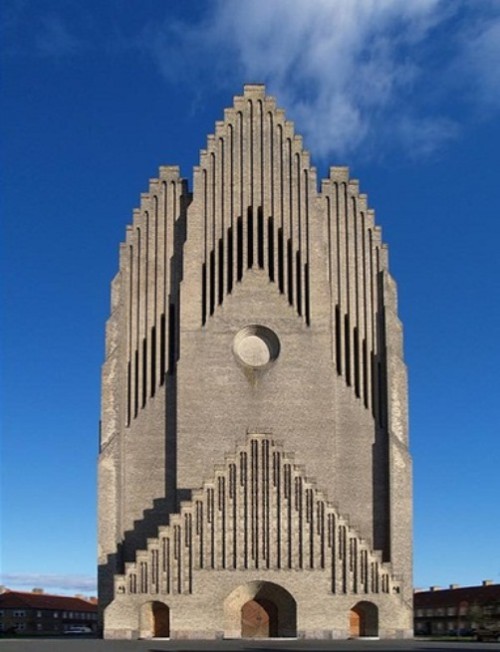 Grundtvig Church. Lutheran Church, located in Copenhagen, Denmark. One of the most famous churches of the city and the rare example of cult buildings, built in the style of expressionism. Construction lasted from 1921 to 1926. 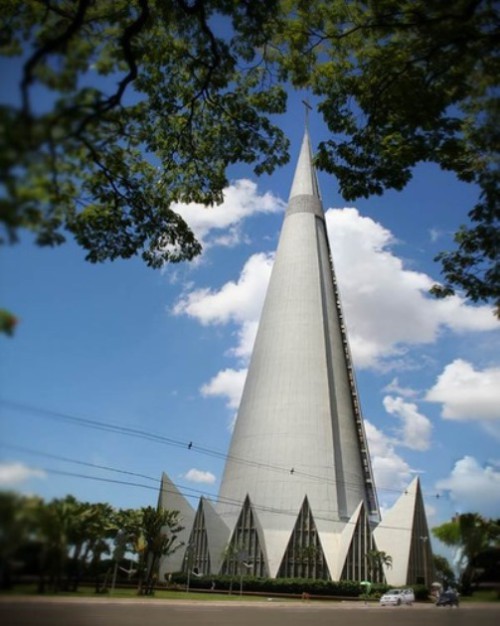 Cathedral Basilica of a Glorious mother of God

Cathedral Basilica of a Glorious mother of God. This is the highest in Latin America, the Catholic Cathedral. Its height of 114 m + 10 m cross on top. The Cathedral was created under the impression of the Soviet satellites. The primary project of the Cathedral invited Don Jaime Luiz Coelho, and designed the Cathedral architect Jose Augusto Bellucci. The Cathedral was constructed in July 1959 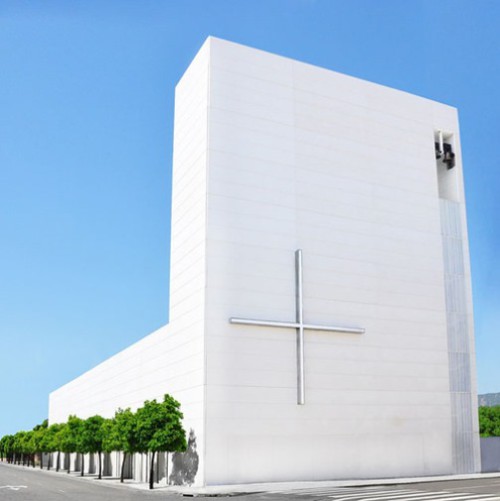 Church of consolation. Located in the Spanish city of Cordoba. A new church was designed by architectural Bureau Vicens + Ramos according to all the rules of strict minimalist canons. The only departure from strictly white color is golden wall in place of the altar. 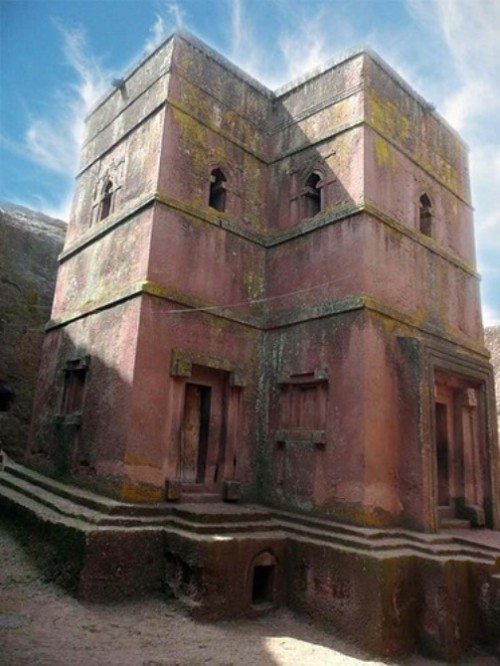 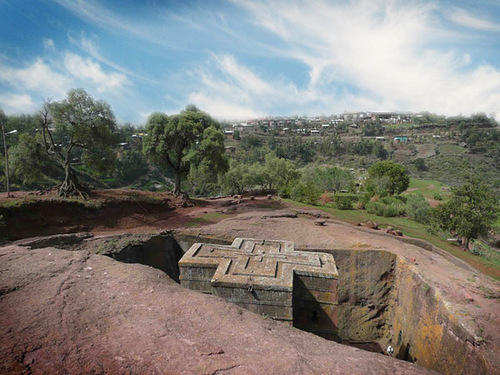 Church of St. George. The cave Church, entirely carved into the cliffs, is located in the Ethiopian town of Lalibela. The building is a cross of 25 to 25 meters, and the same goes underground. This miracle was created in 13 century by order of the King Saint Gebre Mesqel Lalibela. Just 11 temples entirely carved in the rocks and the tunnels. Lalibela remained the capital of Ethiopia from the late 12th into the 13th century. 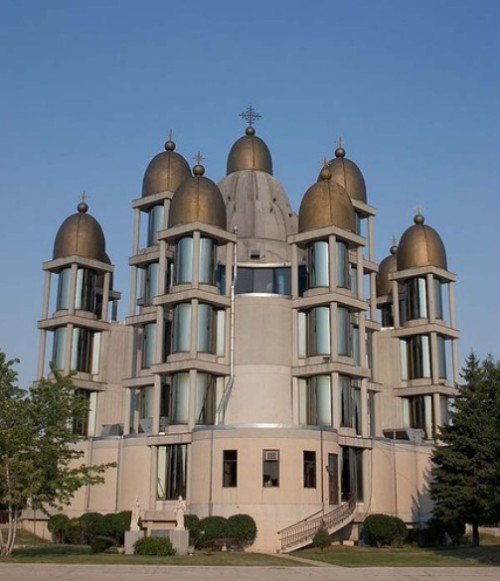 Church of St. Joseph. The Ukrainian Greek Catholic Church was built in Chicago in 1956. Known in the world thanks to 13 Golden domes symbolizing the 12 Apostles, and Jesus Christ. 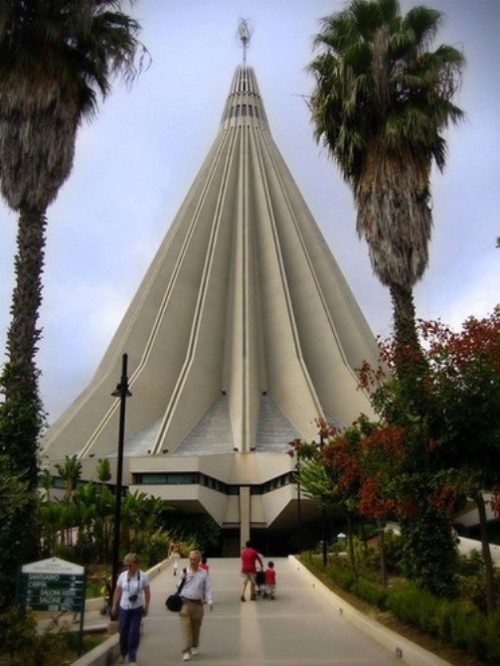 Cathedral of our Lady in tears

Cathedral of our Lady in tears. Cathedral in the form of a concrete roof rises over the Italian city of Siracusa. In the middle of the last century on site of the Cathedral was an elderly couple, who had a statue of the Madonna. Once the statuette was “crying” with human tears, pilgrims flocked to the city from all over the world. In honor of her huge Cathedral was built, perfectly visible from any point of the city. 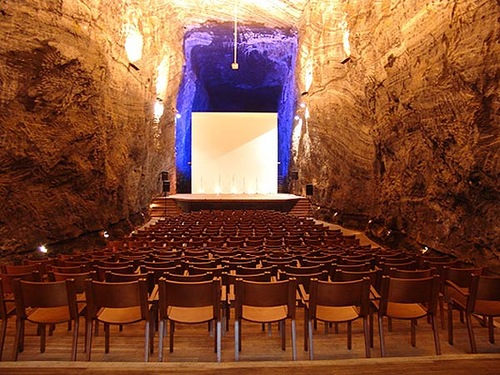 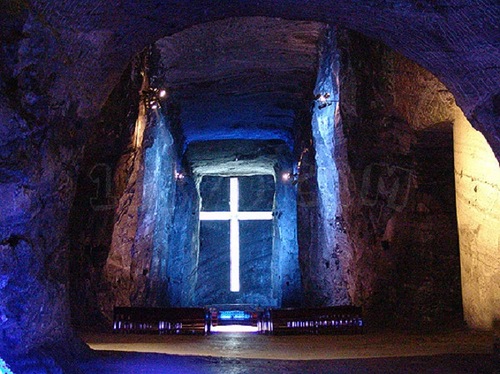 Salt Cathedral Sipakira. Sipakira Cathedral in Colombia is carved into solid rock salt. The altar is a dark tunnel. The height of the Cathedral is 23 m, capacity is more than 10 thousand. man this place historically was used by Indians to mine for the salt. When this is no longer necessary, on the spot of mine has started a temple. 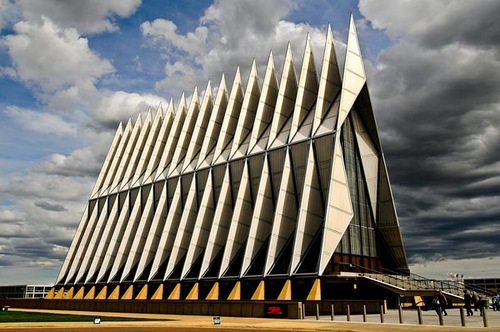 United States Air Force Academy Cadet Chapel. Located in Colorado in the military camp and training branch of the United States Academy of air force. The monumental building of the chapel created profile seventeen rows of steel frames, ending with peaks at a height of about fifty meters. The building is divided into three levels, and its halls are a service of the Catholic, Protestant and Jewish denominations. 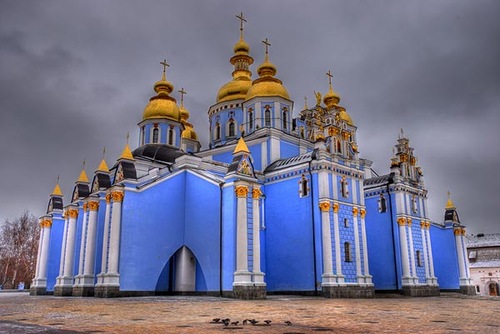 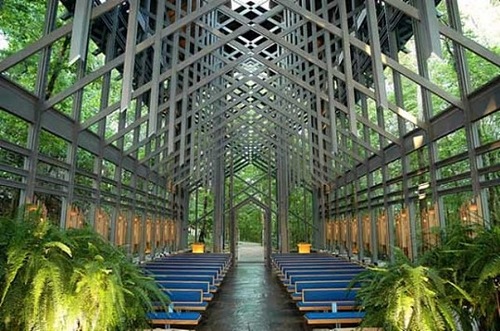 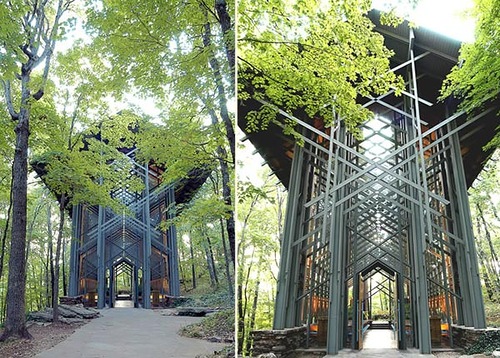 Chapel of thorns. Wooden Chapel is located in Eureka Springs, Arkansas, United States. The chapel was built in 1980, was designed by architect Fay Jones. A light and spacious chapel with a total of 425 Windows. 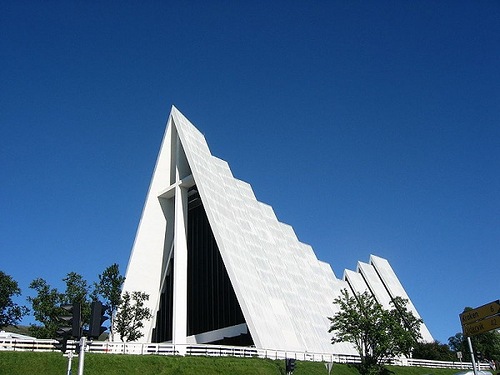 Arctic Cathedral. Lutheran Church in the Norwegian city of Tromso. The architect building consisting of two outwardly converging triangle constructions covered with aluminum plates, should cause an association with an iceberg. 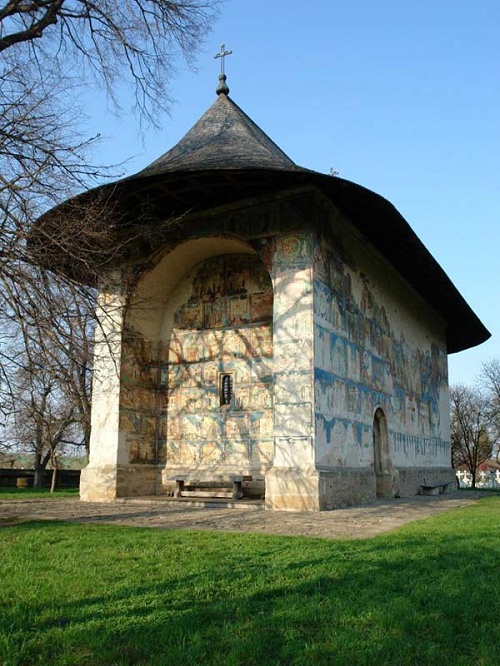 Painted Church of Arbore. Painted churches are the most famous architectural sights of Moldova. Churches are decorated with frescoes outside and inside. Each of these temples has been on the UNESCO World Heritage list.

Mosque in Tirana built in the Cultural Center in Tirana, capital of Albania, which includes a mosque, the Islamic cultural center and the Museum of religious harmony. International competition for the project won the Danish architectural firm BIG. 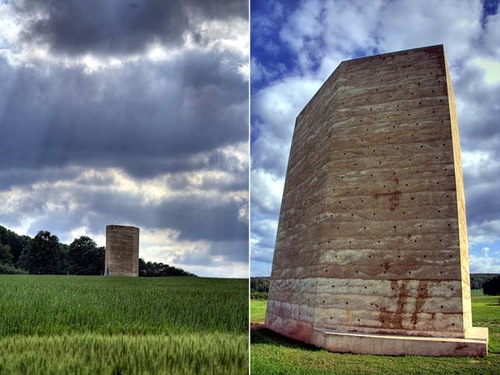 Chapel of farmers. Concrete chapel at the edge of the field near the German city of Mechernich was built by local farmers in honor of Patron Saint Brudera Claus. 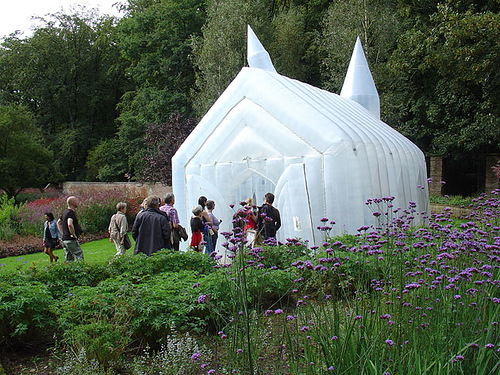 Inflatable Church. Dutch philosopher Frank Los invented the inflatable Transparent Church that can be built in any corner of the globe and in all conditions: at festivals, private parties and other mass events. Inflatable Church fits easily into the trunk of a car and disassembled contains about 30 parishioners.