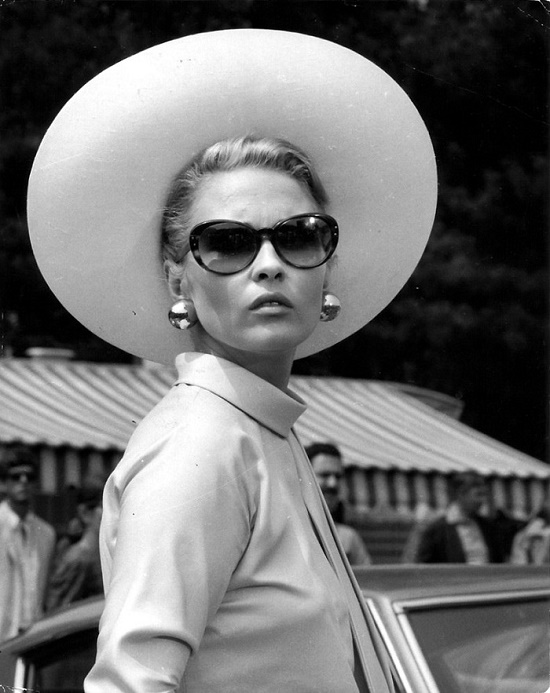 1970s Hollywood brightest star Faye Dunaway
Hollywood of the 1970s, which once lived with the talents and charm of beautiful film stars, began to prefer men. In 1934, among the most revered idols were six women, in 1964 – only three, and in 1973 – two: Barbra Streisand and Goldie Hawn. Hollywood actresses faced the danger of losing their jobs. Producers from now on preferred to sign contracts for with men instead of capricious actresses. At this point in the Hollywood sky a new star caught fire – Faye Dunaway. The appearance on the screen of Faye Dunaway, her success with the audience went against the clearly worked out formula of success, traditional in the American film business.
Born in Florida in 1941, Faye Dunaway grew up in a small provincial town of Baskem. She grew up in a wealthy family, studied music, ballet and singing. An army brat, Dunaway spent her youth traveling from one military base to another with her family. After spending her college years at the University of Florida she suddenly left the university and entered Boston University’s School of Fine and Applied Arts. From now on, she became seriously involved in the theater. The turning point in her fate was the invitation from the famous director of theater and cinema Elia Kazan to the Lincoln Center Repertory Company in 1962. 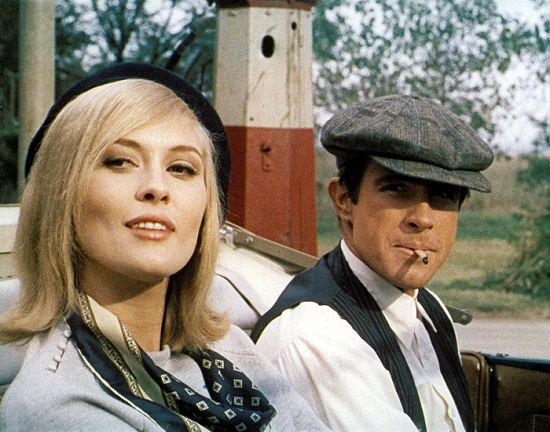 For three years, Faye studied in the studio and played on the training stage. Then she got an engagement on Broadway. Here she performed leading female roles in several stage productions, including Robert Bolt’s Man for All Seasons and Moliere’s Tartuffe. But the first professional success came to her on stage Place Theater, when she played in William alfred’s Hogan’s Goat. The talented beginner actress was noticed by the Hollywood producer Sam Shpigel and, without hesitation, made a contract with her. This was the film debut of Faye Dunaway. 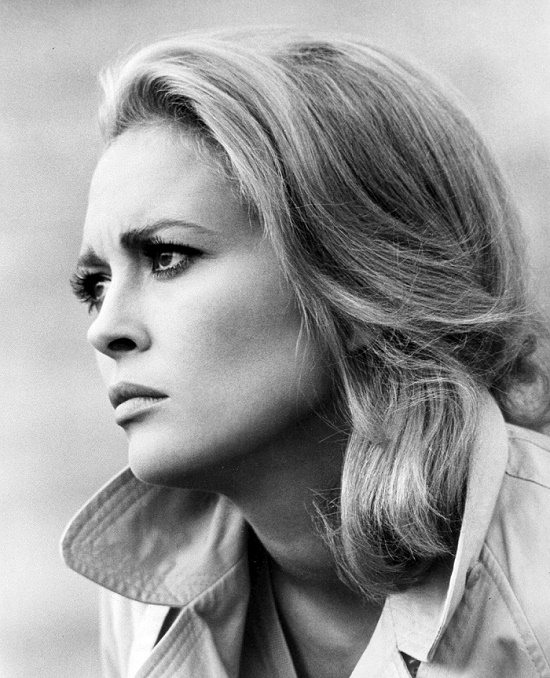 In the film by Elliot Silverstein “The Happening” (1967), she co-starred with the famous Anthony Quinn. In the role of one of the “hippies” we see her attempt to understand the reasons for the youth riot against the growing conformism in American society. A riot expressed in eccentric behavior, special lingo, sexual promiscuity, drug addiction, etc. One of the highlights of this riot of the post-war generation of American youth – a decisive rejection of responsibility for anything in this world. 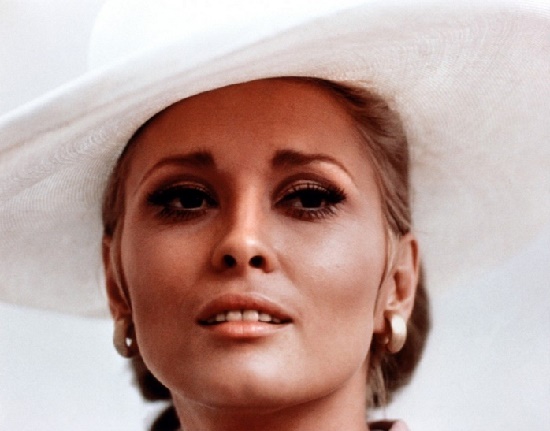 However, the screen debut did not bring Faye success or creative satisfaction. But the actress was noticed by another Hollywood director, Otto Preminger, who signed with her contract to participate in six films. Faye starred in her role as a farmer in Preminger’s drama “Hurry Sundown” (1967). But the platitude of the plot situations, the facelessness of the screen character just frightened the actress: Faye began to doubt her professional abilities. 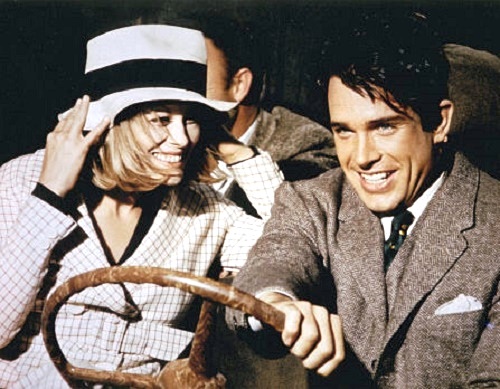 The movie Bonnie and Clyde

At this time, director Arthur Penn offered her the role of Bonnie in the movie “Bonnie and Clyde.” Faye left Preminger in order to work for Penn. She filed a lawsuit against the bonded contract of Preminger, and won the case. In the film by Arthur Penn, the actress created the image of a hardened, unsatisfied girl. The film takes place in the 30s, during the “great crisis”. The heroes of the film – Bonnie and Clyde have no place in life, rejected by society. Clyde dreams of business, Bonnie – about love. Their revolt – expressed spontaneously. The image of Bonnie, the actress makes it clear: tragic is only a force that does not achieve the goal.

It’s true, I did a lot of great movies, and I’m happy

The philistine atmosphere of the provincial town was well known to the actress – she grew up in it. Bonnie dreams about the “beautiful life” trying to put it into practice, becoming a friend of the gangster. Faye played an eccentric, nervous girl who imagined herself to be a movie star, a chic, a secular lady. Now Bonnie appears lonely, confused, with unconcealed melancholy and secret hope in the voice of inquiring Clyde:
– And what would you do if you could start all over again?
After listening to Clyde’s response that there is no way back, Bonnie-Dunaway seems to be stoned from sorrowful insight … This stiffened face, as a sign of doom, Dunaway will carry to the tragic end of the film. In this work Faye Dunaway showed herself as an actress of subtle psychological analysis, able to convey the slightest shades in the feelings and moods of her character. 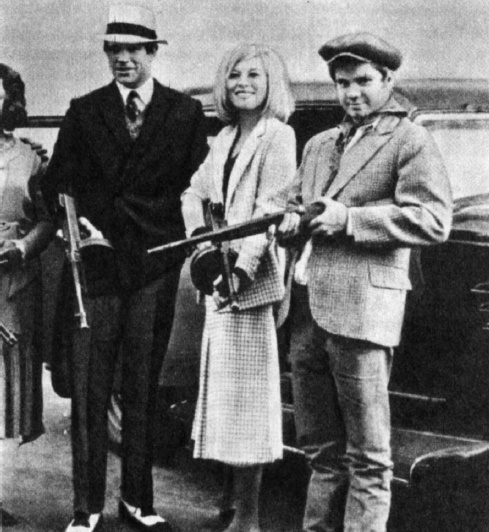 The actress, who later collided with student and youth circles, said she saw many girls who looked like Bonnie. In particular, such unbalanced characters, a rebellious spirit and a sense of the meaninglessness of their lives, and lack of a clear goal. Yes, and Faye Dunaway herself had to repeatedly demonstrate the power of her character in clashes with producers and directors, defend freedom in choosing roles, and independence of personal life from the interests of the film business. Noteworthy, the American press even nicknamed the actress “rebellious Faye”. 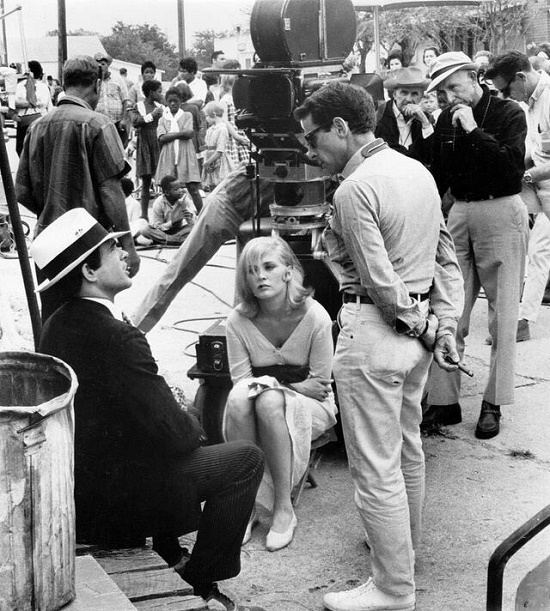 Meanwhile, Arthur Pen and the producers noted the extraordinary performance of the actress during the filming, her strict self-discipline and willpower. They say, she worked, not sparing herself, 12-14 hours a day. As a result, “Bonnie and Clyde” brought Faye Dunaway world success and recognition. The award of the American Academy of Arts and Sciences was one of the many awards the actress received for the performance of the role of Bonnie. 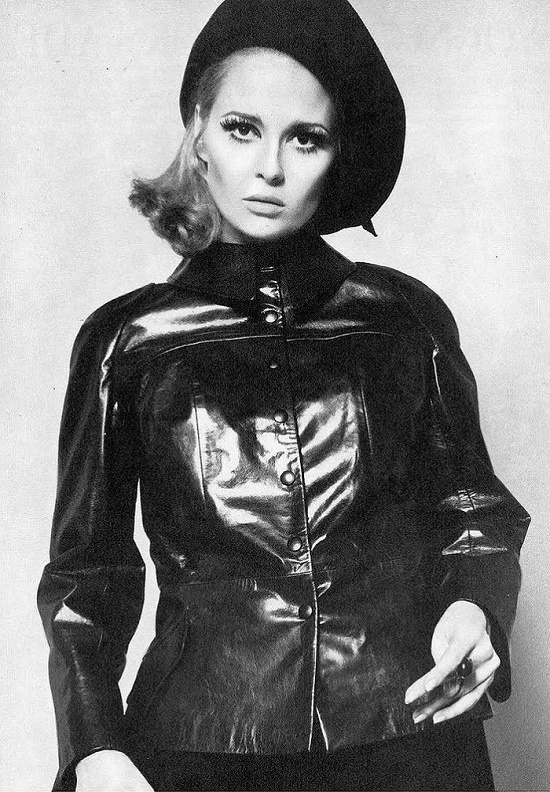 One of the greatest and most beautiful actresses of her generation, Faye Dunaway

A year after “Bonnie and Clyde,” Faye starred in the detective comedy “The Case of Thomas Crown,” where she played a female detective, exposing a bank robber. For the role of Gloria, the magazine “Films & Filming” recognized Faye Dunaway as the best performer of the female role in the 1970s. For three years of her cinematic career Faye Dunaway showed herself as an actress of exceptional talent. 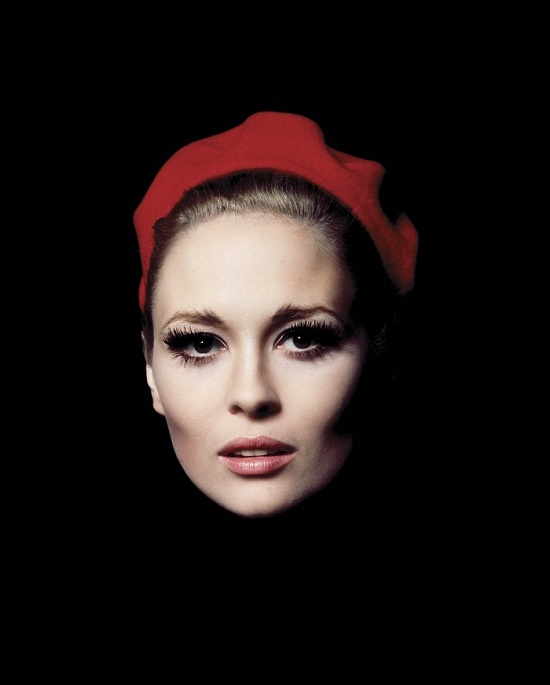 In fact, Faye worked both – with famous movie stars and young, capable directors – Renee Clement and Vittorio De Sica, Roman Polanski and Frank Perry, Richard Leicester and Jerry Schatzberg. These works only demonstrated her desire for a variety of genres and expansion of the actor’s role. Dissatisfaction with the roles that the directors offer her, high self-discipline created the actress a great authority in the world of cinema. 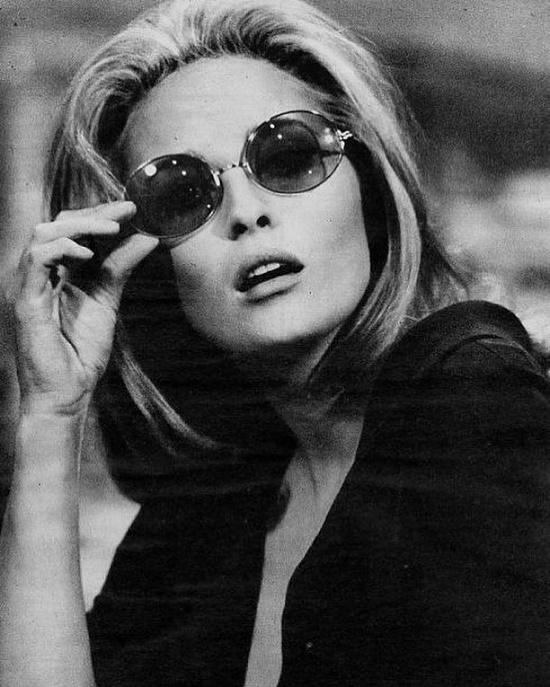 Undoubtedly, to forget the roles of Faye Dunaway is impossible. This is the peculiarity of her generous and bright talent which earned her a place in the constellation of actors. Her partners in the film are Steve McQueen, Paul Newman, William Holden, Robert Wagner, Fred Astaire, Jennifer Jones, and more.

Meanwhile, Dunaway seemed almost to disappear during the rest of the 1980s. Indeed, her film appearances became less frequent and the movies she did appear in. It wasn’t until her stunning, serious portrayal of a drunk woman in Barfly (1987) that she received substantial critical approval for the first time in more than a decade. However, during the 1990s Dunaway continued to play – Scorchers (1992), Wait until Spring, Bandini (1990). Also Don Juan DeMarco (1994), Albino Alligator (1996), Double Edge (1992), Gia (1999), etc. Noteworthy, Hollywood brightest star Faye Dunaway still demonstrated that she possessed the glamour and sex appeal that was her trademark.

Warren and Faye attending the premiere of Bonnie and Clyde at the ‘Moulin Rouge’, Paris, 1968 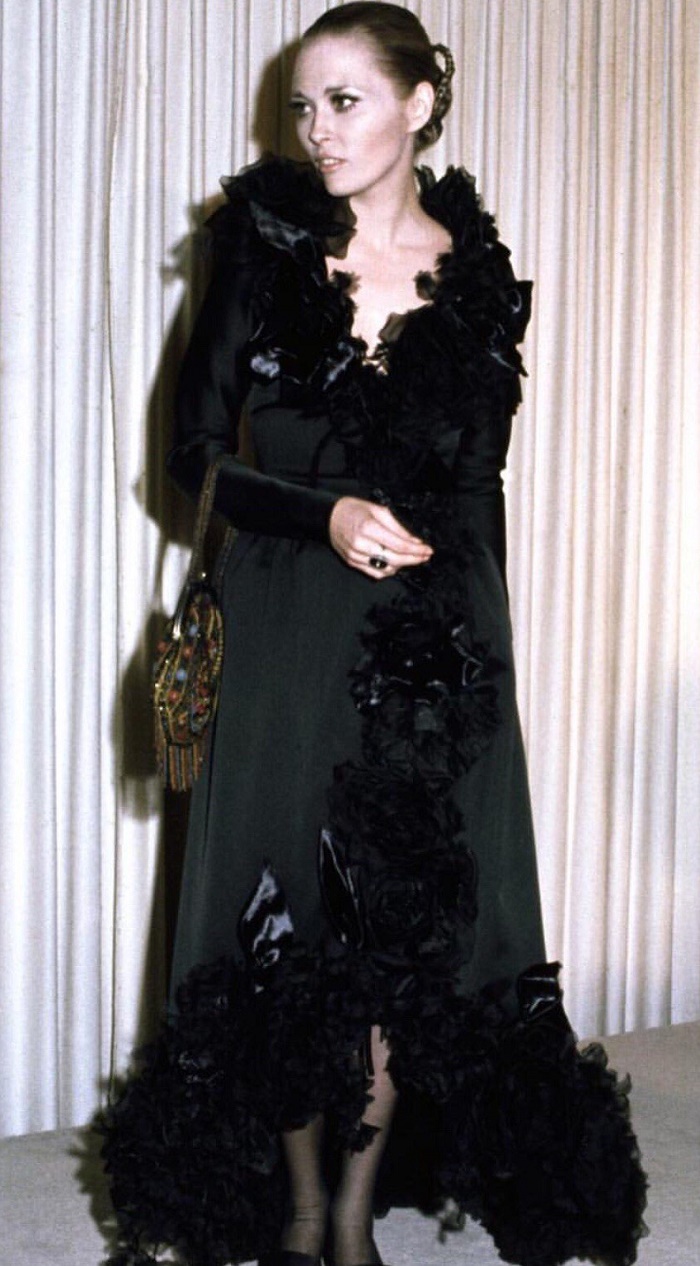 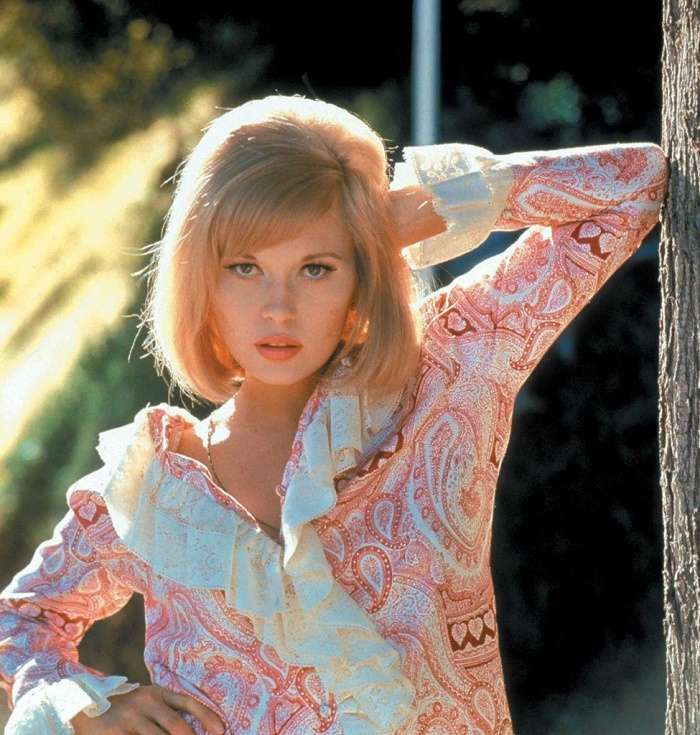 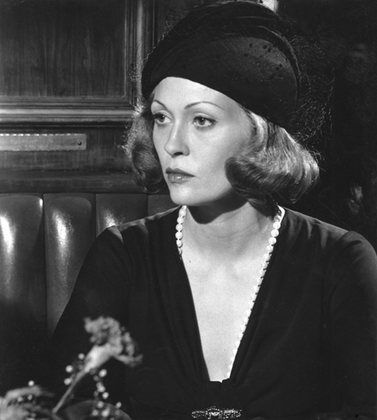 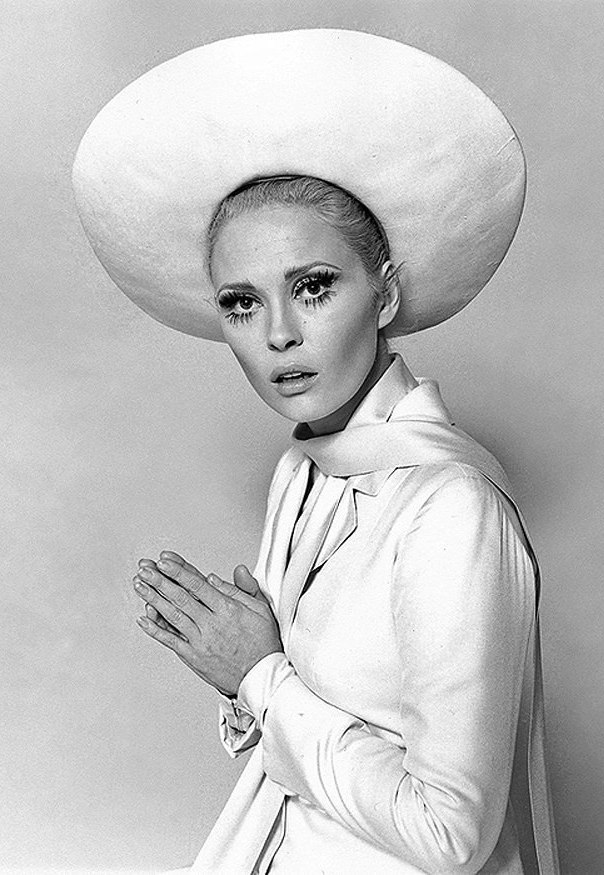 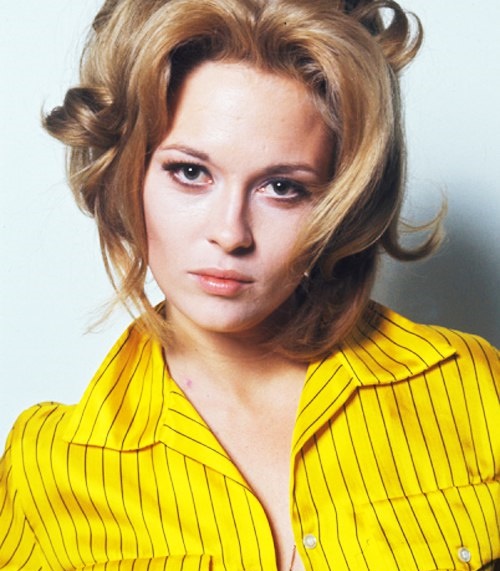 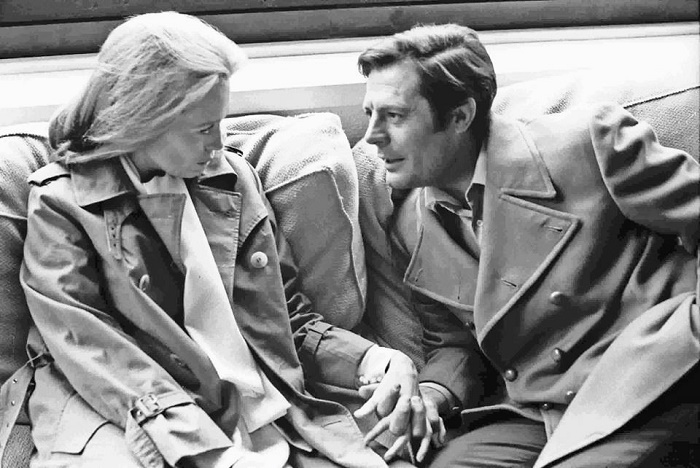 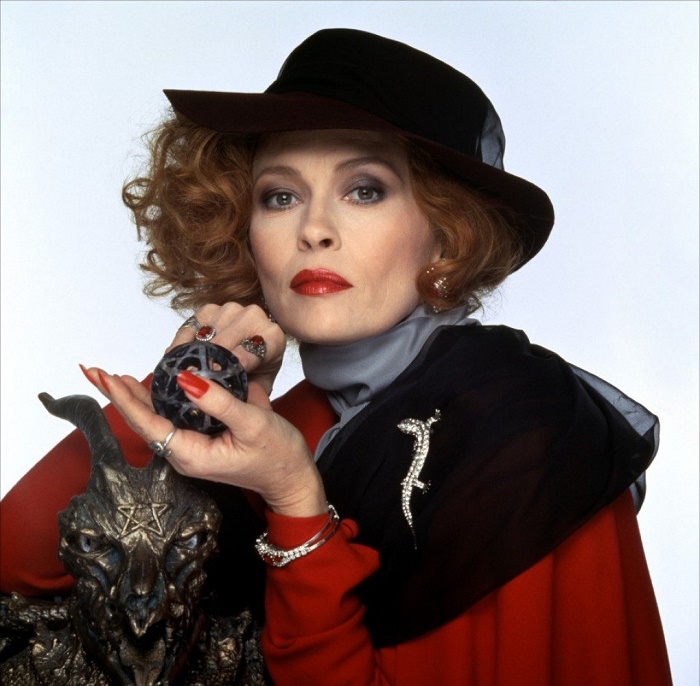 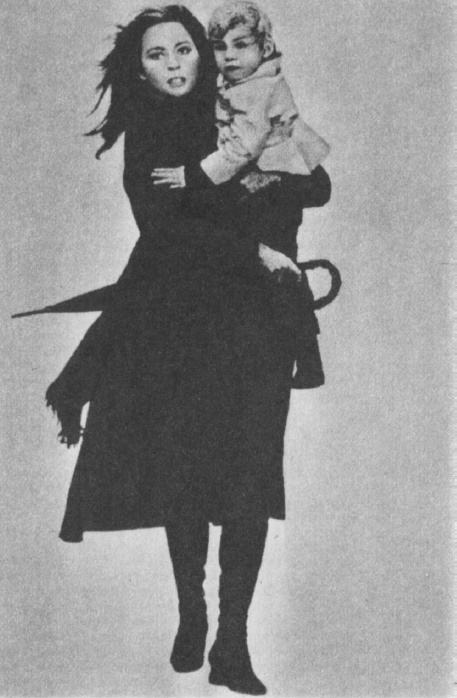 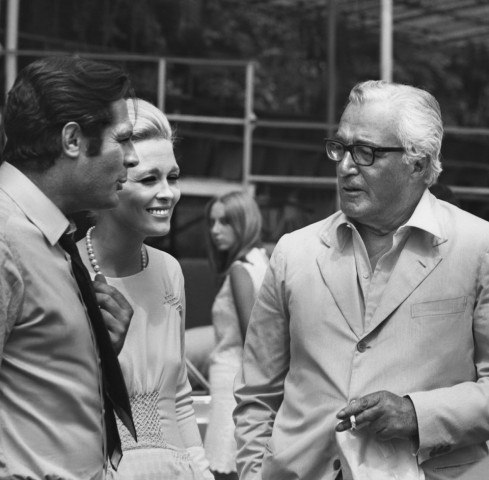 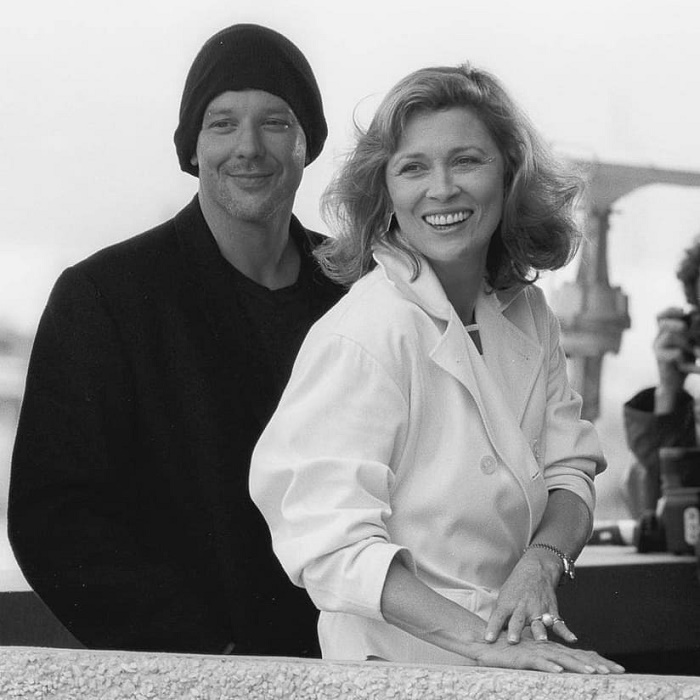 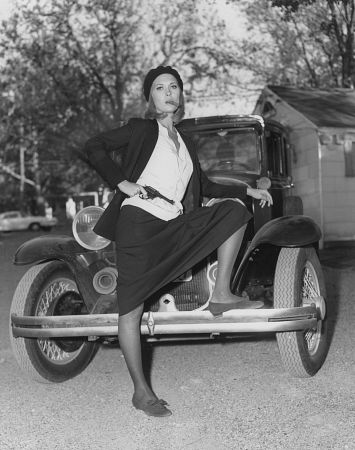 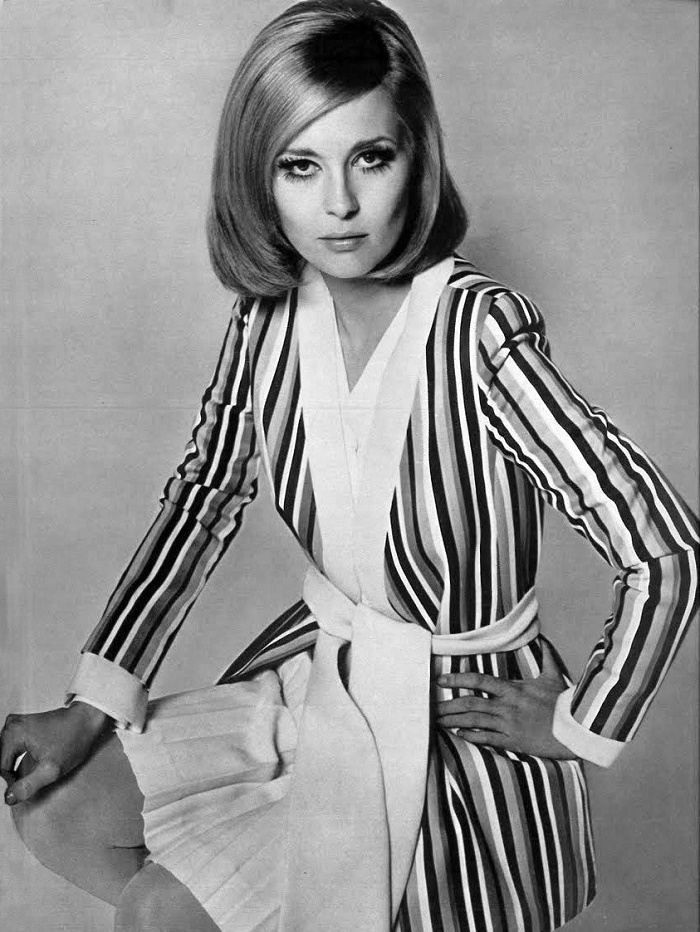 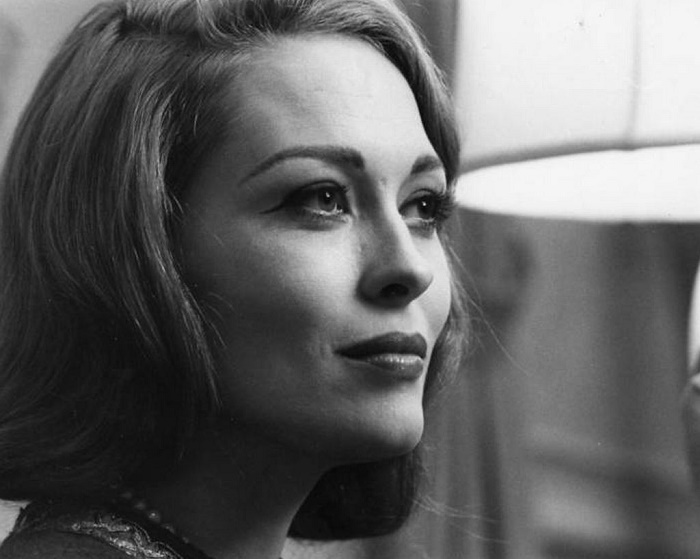 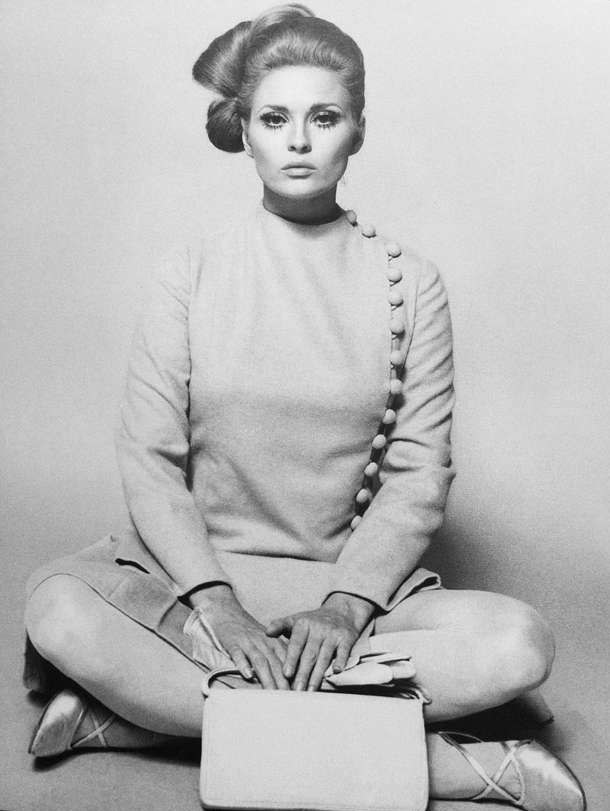 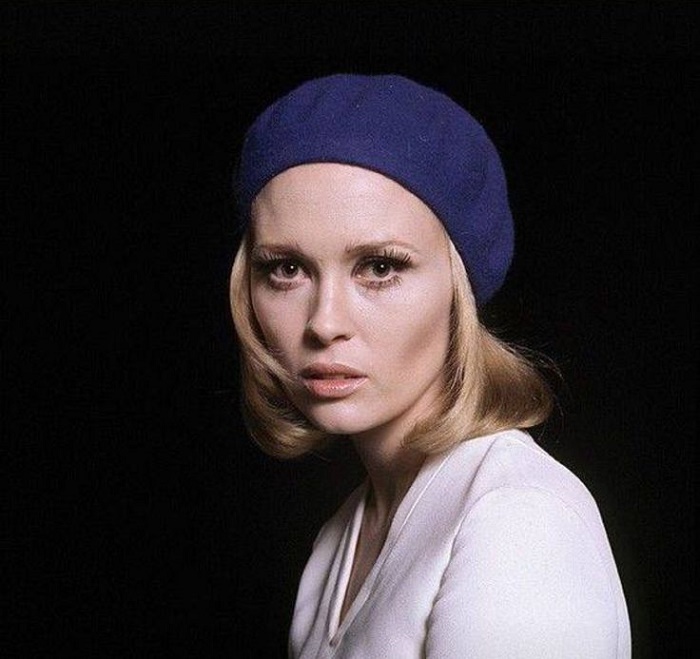 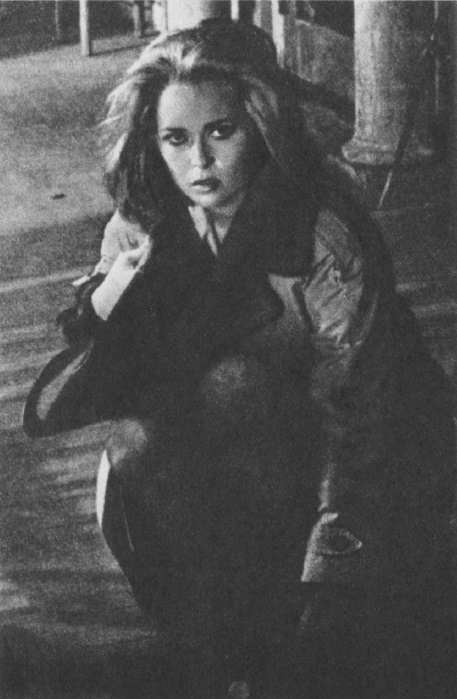 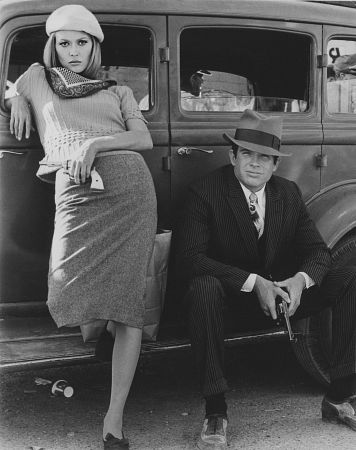 Warren Beatty and Faye Dunaway in Bonnie and Clyde (1967) 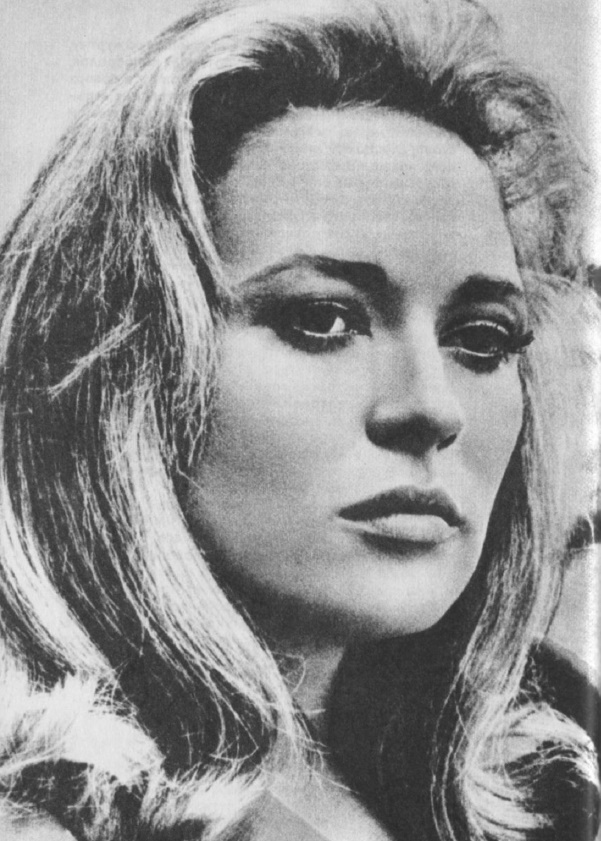