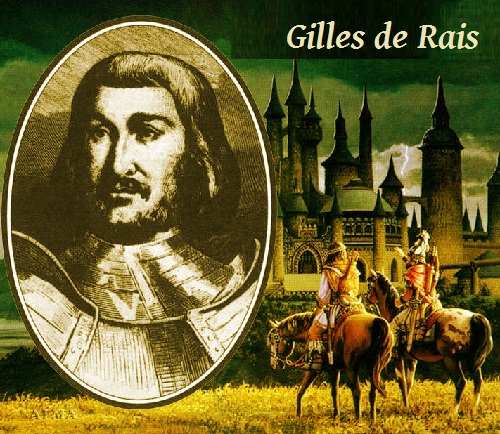 Bluebeard prototype Gilles de Rais. Gilles de Rais – Marshal of France, the hero of the Hundred Years’ War, a contemporary and a colleague of Joan of Arc

For five centuries Bluebeard prototype was considered Gilles de Rais. Who has not heard of the villain, immortalized by Charles Perrault under the name of Bluebeard? Bluebeard Knight one by one killed his beautiful wives as soon as they dared to violate the strict ban of their husband not to use a key from some mysterious room. Another lady of the manor, of course, could not cope with curiosity. She opened the door and a terrible picture appeared in front of her – lifeless bodies of her husband’s former companions on the bloody floor. 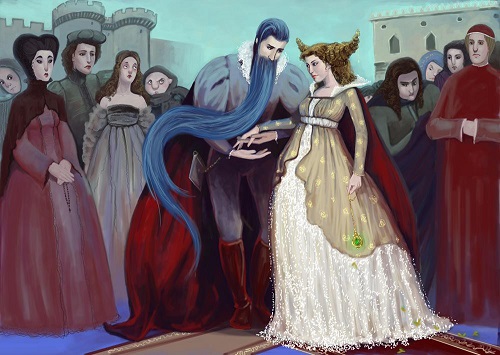 Stunned by the discovery the girl finally realized the meaning of strange warning of her husband, but – too late. The unhappy joined the monstrous collection in the dungeon. For those who are less well-read, Bluebeard is a synonym of polygamist, or wife killer. And how it happened that Gilles de Rais – Marshal of France, the hero of the Hundred Years’ War, a contemporary and a colleague of the famous Joan of Arc has become Bluebeard? 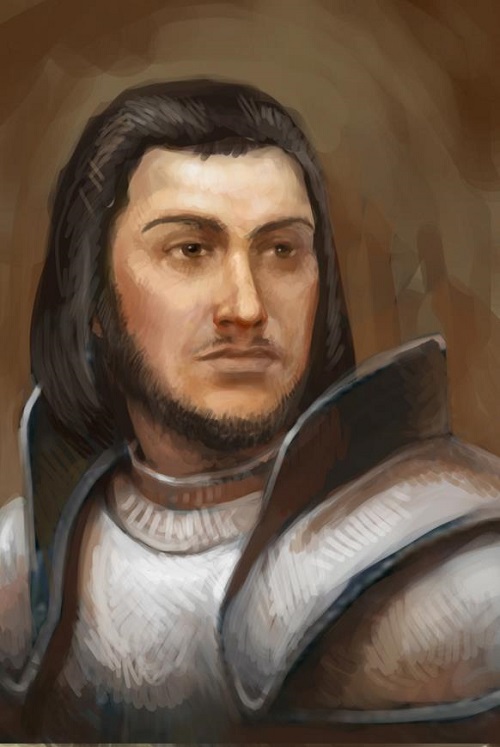 In late August 1440, Monsignor Jean de Malestrue, Bishop of Nantes, the chief adviser and “right hand” of the Duke of Brittany, delivered a sensational sermon at the cathedral with a crowd of parishioners in front of it. His Eminence allegedly became aware of the heinous crimes of one of the leading nobles of Brittany, Marshal Gilles de Rais, “against young children and adolescents of both sexes”. Bishop demanded that the people of all ranks, possessing at least some knowledge of these “chilling deeds” should inform him about them. 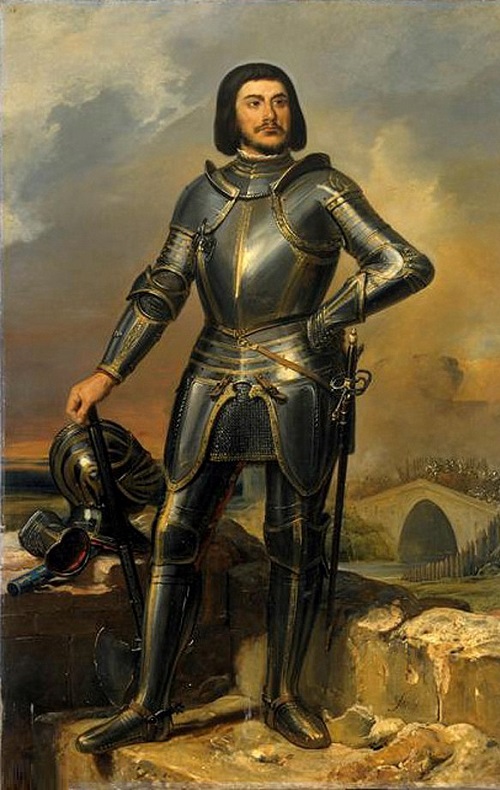 Bluebeard prototype Gilles de Rais. Portrait from the gallery of marshals of France at Versailles

This bishop, full of meaningful omissions, made ​​in the listeners the impression that the investigation had serious evidence. In fact Malestrue knew about the disappearance of the one and only child, who somehow was tied up with Gilles de Rais, and it happened a month before the fateful sermon. About the direct evidence was not mentioned. It was obvious that the ruling upper classes of the Duchy Brittany just decided to use the opportunity to deal with the disgraced marshal. 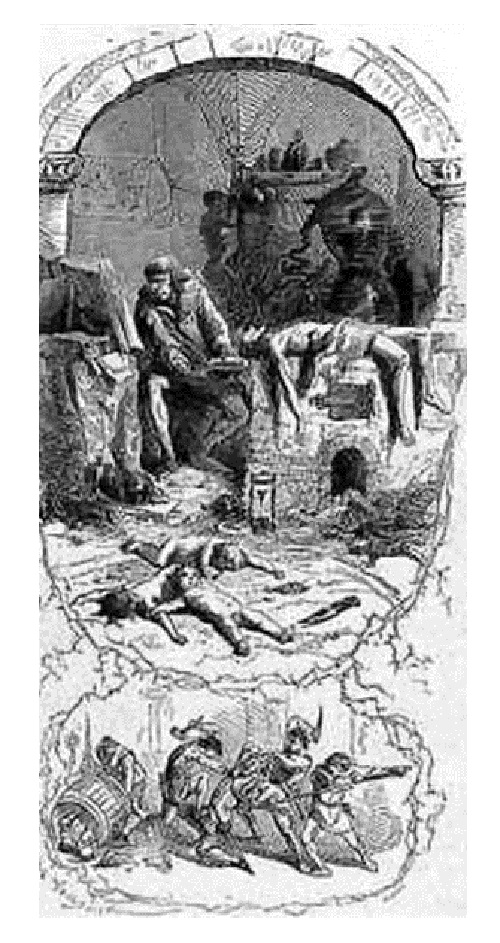 Soon the bishop had an occasion to inform about all the head of inquisitorial tribunal of Brittany – Father Jean Blouin. In general, the investigation since then was unfolded in all directions. A few days later appeared the indictment. On contemporaries it made ​​a strong impression. There was everything: human sacrifice to the demon home, and witchcraft “with the use of special technical means”, and the killing of children with the dismemberment and burning their bodies and sexual perversion. 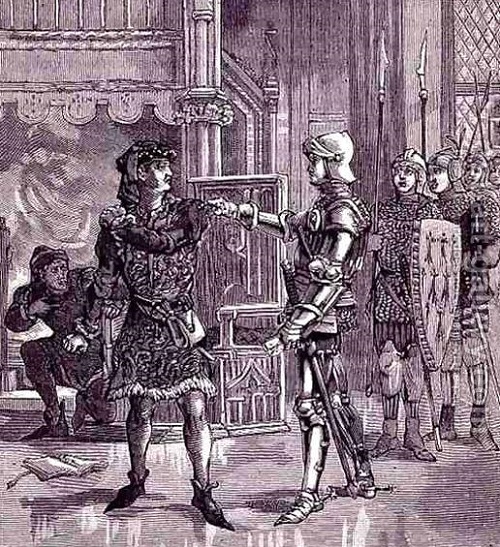 The indictment of 47 items was sent to the Duke of Brittany and the General Inquisitor of France Guillaume Meric. Marshal was officially informed about it on September 13, 1440 and was asked to come to the episcopal court for an explanation.

Bluebeard, his wife, and the magical key in a 19th-century illustration by Gustave Doré 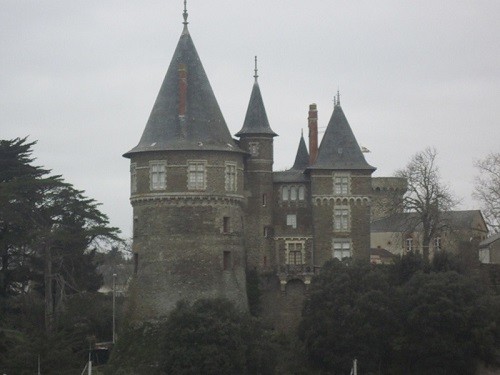 Bluebeard’s Castle. Construction of the 19th century. The French Revolution leveled the fortress with the ground, because of the fame of Gilles de Rais. It was restored only in the 19th century 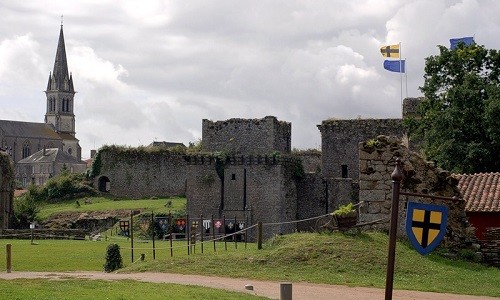 Bluebeard’s Castle. Construction of the 19th century. The French Revolution leveled the fortress with the ground, because of the fame of Gilles de Rais. It was restored only in the 19th century

The Tribunal was set for September 19. The authorities tried to make the process public as much as possible: it was announced in the squares of all the cities in Brittany, and were invited all who could have at least some, true or imaginary evidence. Spectators were admitted free, and the influx of them was so great that many had to hang around outside the door. In the address of Gilles de Rais swept insults, women threw themselves at the guards to break up close and to be able to spit at the face of “damned villain”. 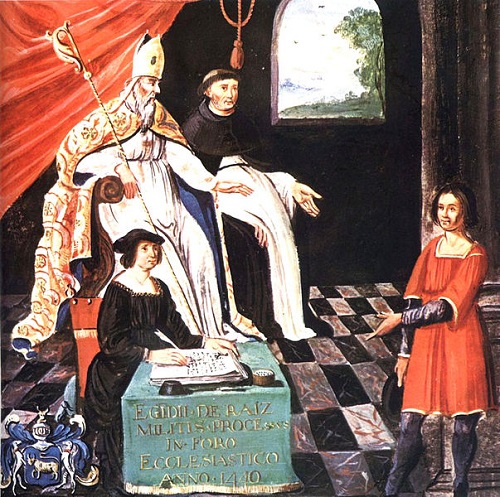 Alchemist Francesco Prelati stated that the Gilles de Rais had composed and written with the blood the agreement with the demon Barron, in which he promised to bring the bloody sacrifices, as a change to three gifts: omniscience, wealth and power. The witness said that Gilles de Rais first tried to buy off chickens, but at the request of Barron moved to children.

Gilles de Sille spoke in detail about the sexual behavior of his former patron – the monstrous abuse of minors of both sexes. About missing kiddies witnessed their parents. Some of them said that last time they saw their children when sent them to the possession of Gilles de Rais to beg. Finally, Griar and Khorium gave the most terrible testimony about Gilles de Rais, who, according to them, collected human heads, which were kept in a special dungeon of the castle, and that he felt the danger of arrest, Marshall personally ordered them to destroy these heads. 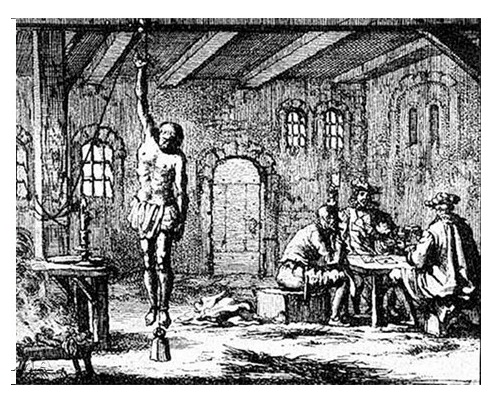 Gilles de Montmorency-Laval, Baron de Rais, was stretched out on the so-called ladder. This method of torture was the most popular at that time in France. Under torture courageous marshal quickly repented of bygone perseverance and promised to continue to be compliant. For a start, he knelt before the bishop and humbly asked him to remove the ban, and later began to testify, and little by little, “confessed” in everything. On October 21, Gilles de Rais publicly agreed with the fact that “enjoyed vice”, and described in detail his favorite ways to kill his victims. Marshal himself called the number of tortured by him children – 800 (if so, he had to kill one child per week during last 15 years). But the court wisely decided that 150 would be enough. 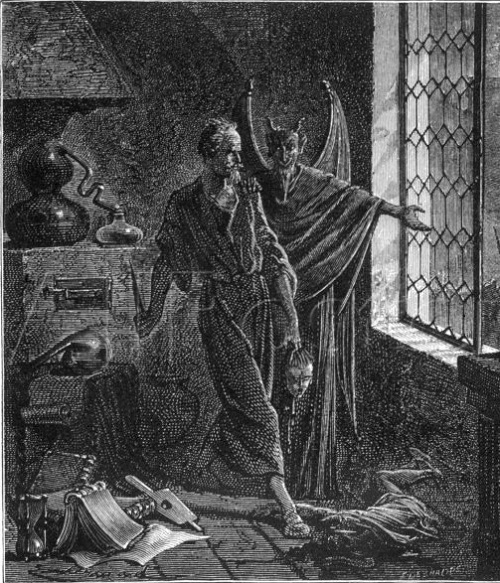 Gilles de Rais. Illustration Deschamps in History of Magic, the supernatural world and fate through time and people

His confession was obtained under torture and also excommunication, which he dreaded. A close examination of the testimony of his associates, in particular that of Poitou and Henriet, reveals that they are almost identical and were clearly extracted by means of torture. Even the statements of outsiders, alleging the disappearance of children, mostly boils down to hearsay; the very few cases where named children have vanished can be traced back to the testimony of just eight witnesses, which is not that many to suborn. There was no physical evidence to back up this testimony, not a body or even a fragment of bone. His judges also stood to gain from his death: in fact, Jean V Duke of Brittany disposed of his share of the loot before de Rais was even arrested. 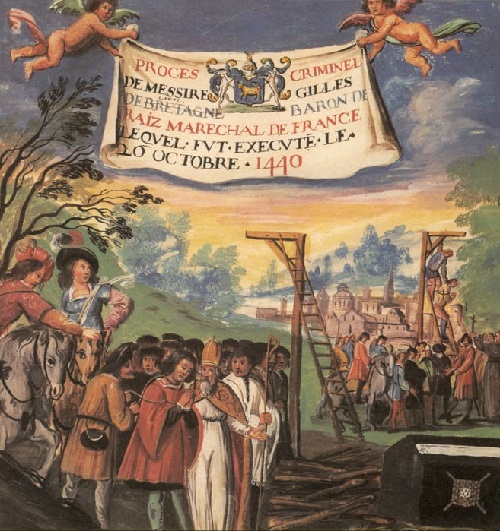 The morning of October 26, 1440 the area in front of Nantes cathedral was crowded with citizens. Everyone wanted to look at the execution of a noble lord, accused of heinous crimes. In the cathedral Marshal Gilles de Rais repented and asked for forgiveness. From church – for apostasy, heresy, blasphemy and witchcraft. From his lord, Duke of Brittany – for numerous murders of young children. 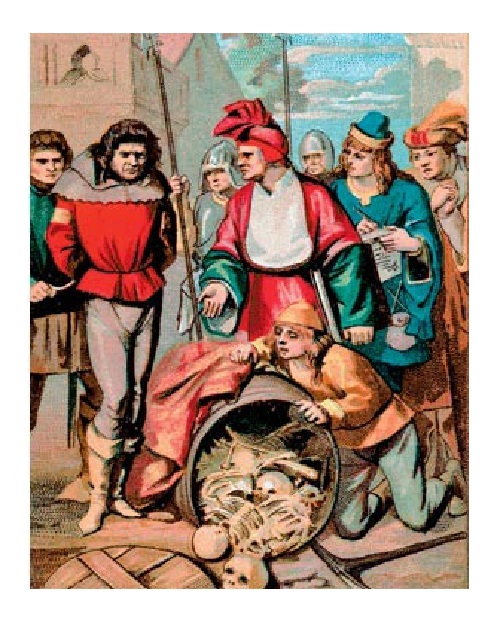 The ceremony was not long – at about 10 o’clock, on the square to the execution procession moved off carts: the first – with marshal himself, and following him two of his closest bodyguards and servants, by their own testimony, assistants to the wicked deeds – Henri Griar and Etienne Khorium. The two men, people of humble, half an hour later, will be burned alive at the stake. Their master will be strangled, and the executioner “symbolically” will set fire to the brushwood under the dead body, the corpse will be immediately pulled out, and given to relatives. Those, however, will not dare to bury “the monster” in the family vault – he’ll find eternal rest under an unmarked plate in the Carmelite monastery at the outskirts of Nantes. 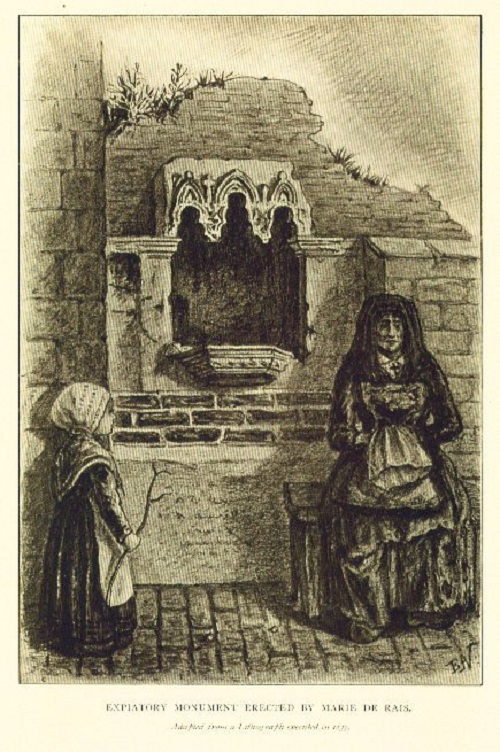 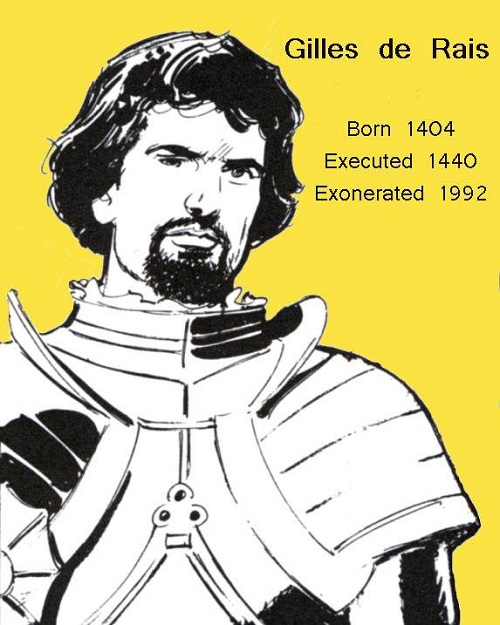 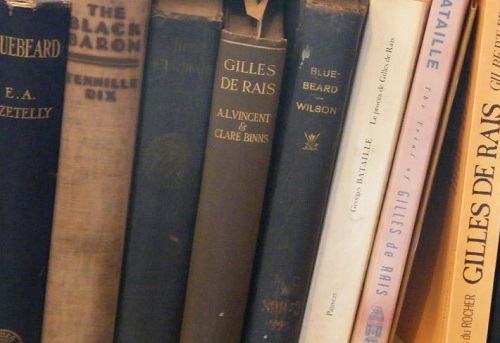 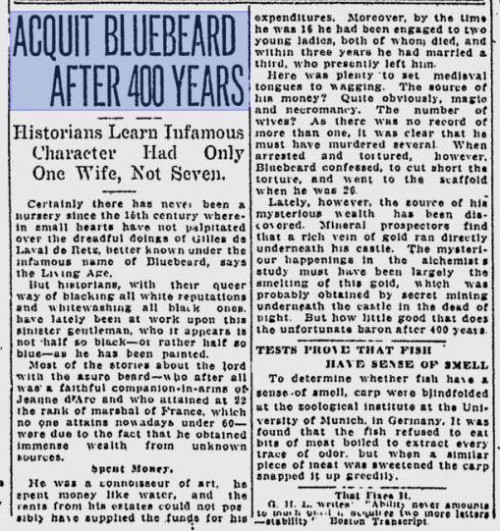 Gilles de Rais was re-tried by a Court of Cassation in 1992 & acquitted. 1920s. This lighthearted article belies the seriousness of the attempt 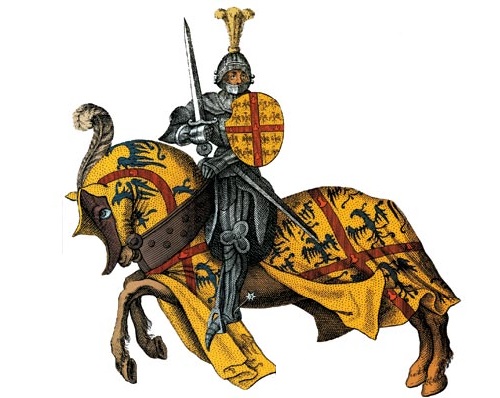 As of 1992, Gilles de Rais is officially an innocent man. He was certainly not the basis for Bluebeard, this is a very old story which appears all over the world in different forms 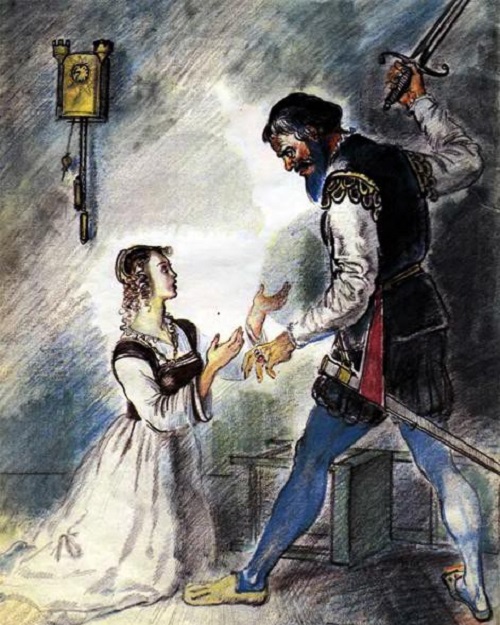 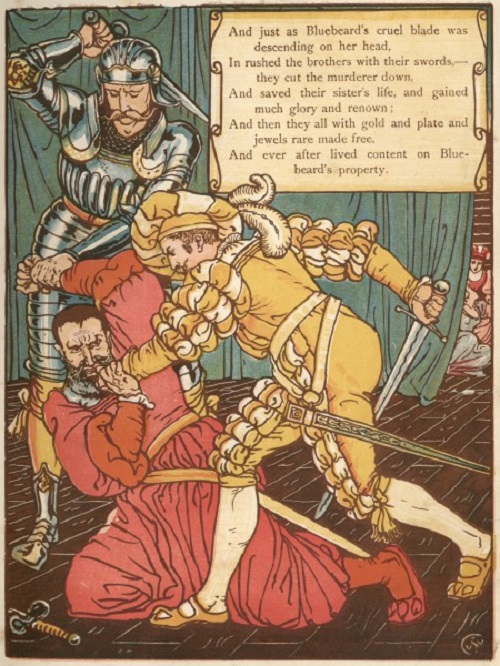 Bluebeard is slain in a woodcut by Walter Crane

Name of Gilles de Rais as Bluebeard maniac, killer of women and children, several authors have mentioned in the occult or gothic genre: Robert Bloch, Arthur Machen, Jeremiah guys. And in the little story of Kir Bulychev villain “Bluebeard” is the head of the laboratory, who dismantles the unruly biorobots.

Bluebeard was also identified with Breton 6th century king named Conomor the Accursed who married Tryphine (a patron saint of sick children and those whose birth is overdue), daughter of the Duke of Vannes.

The frescoes in the church of Morbihan tell the whole story, but because they belong to the 17th century, made 6 years after the fairy tale by Charles Perrault, they can hardly reveal the true story. In the “Great Chronicle” of 1531 Alain Bouchard writes: “Conomor already killed three wives. Conomor was going to marry Tryphine. Geroh, Count of Vannes, did not want to give him his daughter Tryphine, but then agreed, hoping that St. Hilda would resurrect her if necessary. The new queen once went to the chapel, where Conomor’s wives were buried, and there she met their shadows. The ghosts warns the Queen that the King kills his wife as soon as she gets pregnant. Since Tryphine was pregnant, she was afraid. Shadows gave her magical aid to help her escape, and Tryphine escapes. Conomor catches and beheads her. Count Geroh asks St. Hilda for help, she goes to the corpse, puts the head to the body, and with the tears and prayers entreats God to resurrect the Queen. This story is also legendary. Conomor kills his wives, because, like Oedipus, his son would kill him. 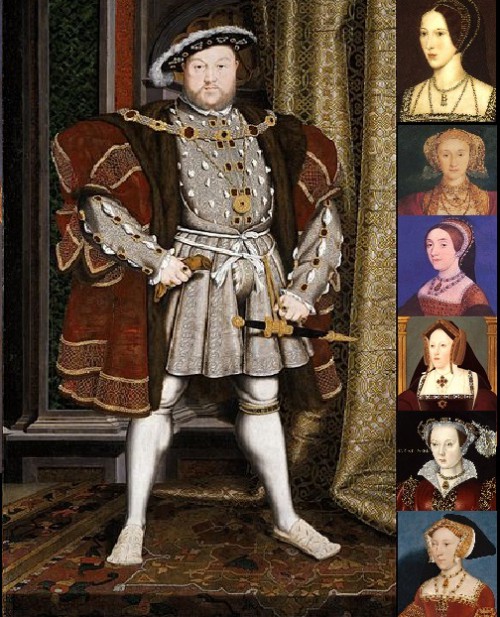 There was even such an unusual version that Bluebeard prototype was none other than Henry Vlll, King of England, Elizabeth’s father. That he took the upper hand in the affairs of the ingenuity of the family despite the commitment to Protestantism, with his six wives treated harshly.