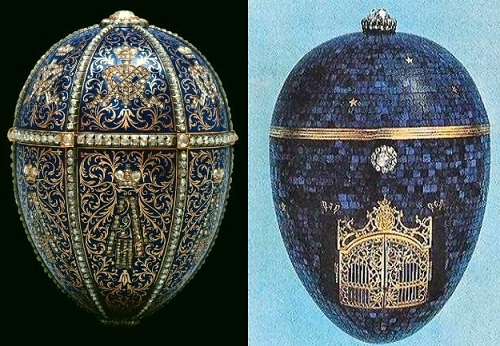 Rare Faberge eggs
Manufactured by the Imperial court jeweler Carl Faberge firm, the egg was a work of a jeweler Michael Perkhin. The materials used in the work – gold, sapphires, diamonds, pearls and enamel. In particular, it was the new emperor, who commissioned made in 1895 egg for his widowed mother – the Empress, on the Easter 1895. The egg, divided into 12 sections and decorated with the initials of the deceased Maria Feodorovna and Alexander III, repeated 6 times. Stored in the egg Hillwood Museum, Washington, USA. 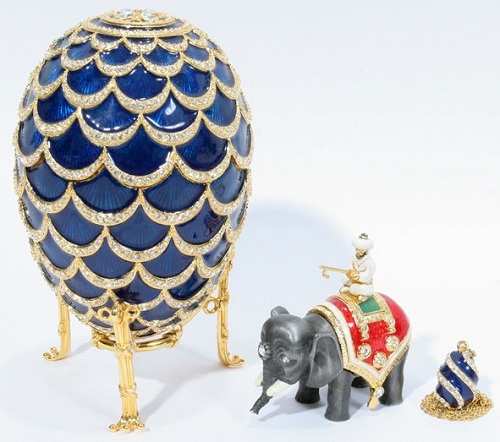 Made in the Imperial court jeweler Carl Faberge firm in 1900, pine egg – covered with gold with blue enamel. Framed by semicircles, studded with diamonds and looks like a pine cone. Surprise – elephant driver, started up with a golden key. The giveer of the egg – unknown. “Pine cone” is in a private collection in San – Diego USA. Sold at auction, “Christy” in Geneva on 10 May 1989, for over 3.14 million dollars (to the wife of the founder of Mac – Donald). 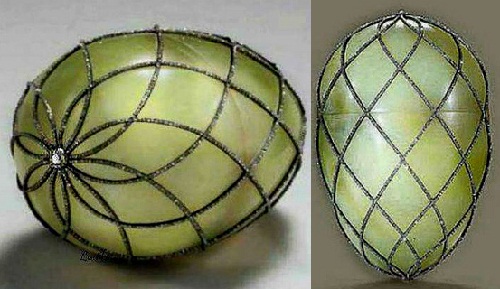 Diamond Mesh”, made by 1892. Covered with netting, studded with diamonds. Stand, kept the egg in the form of the cherubim – lost. Given to Empress – mother Maria Feodorovna, the egg is in a private collection in London, England 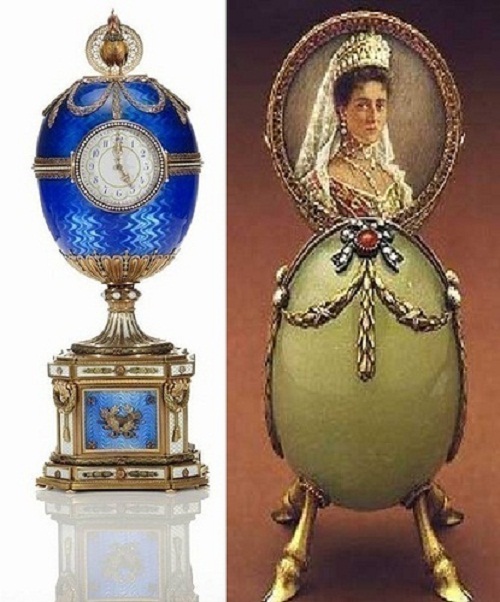 Egg with hooves. Work by Master jeweler Michael Perkhin. Made of gold, diamonds, rubies and pearls. Egg size – 8 3 cm. The Egg based on Russian folklore. It has fancy gold pins in the form of cloven hooves. Presented to the Empress Alexandra by one of her confidants. Surprise egg is a miniature portrait of the Empress, in which she is depicted in ceremonial dress and a royal crown. Portrait inserted in a gold frame. Thumbnail – picture rotating between the halves of the egg. Decorated with garlands of laurel leaves, attached bow, diamond, ruby and pearl pins with heads. Stored in the egg collection of the magazine “Forbes” in New York, USA. 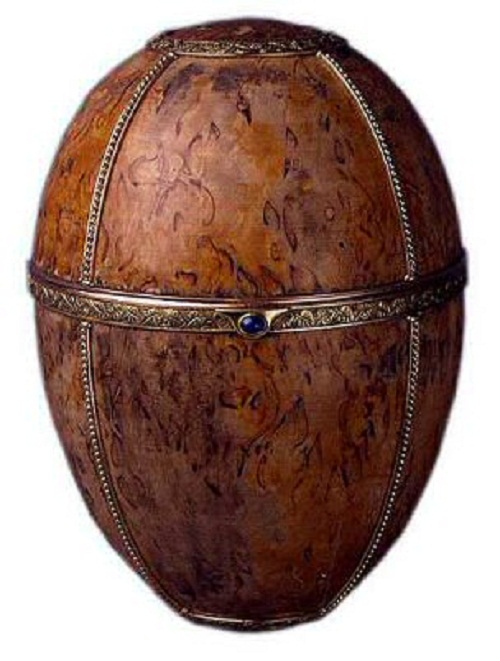 “Birch” egg, made by jeweler Carl Faberge firm in 1917

“Birch” egg. Divided into six segments of chased gold. For the first time put on display in 2001. The egg of the 1917, emphasized simple: from birch wood in a gold mount. It had to be presented to the king, but Kerensky did not allow it. 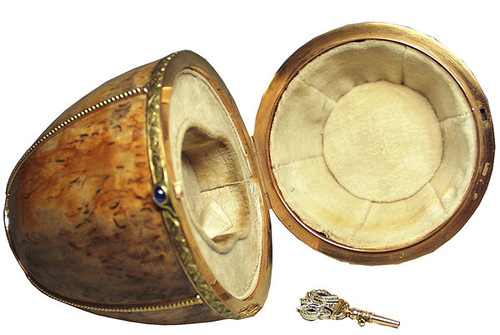 According to one hypothesis, the egg fell to the Grand Duke Vladimir Alexandrovich. When the Bolsheviks inventory of the property mentioned some wooden egg with a figure of an elephant inside the crown. Expropriated little thing, and its further fate – unknown. 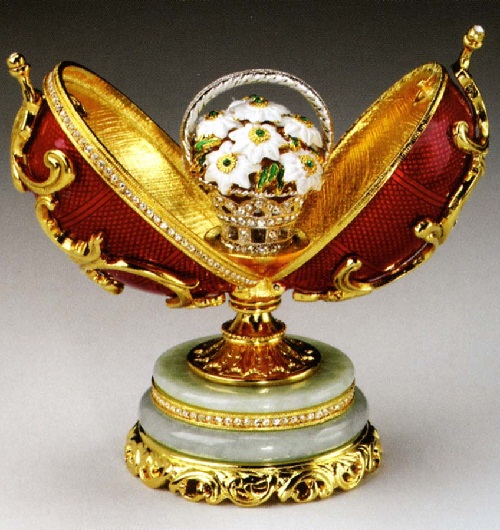 An egg “Spring Flowers” is “early” brand of the leading master of Faberge and Michael Perkhin hallmark, used in St. Petersburg until 1899. Egg – the color gold, platinum, translucent red enamel, diamonds, chalcedony, and Bowen. Shopping Cart – platinum, gold, transparent green enamel, white chalcedony, and demantoids. Size – 8.3 cm. Covered with translucent red enamel strawberry with golden curls in the style of overhead Second Rococo. The valves open by a vertical seam, trimmed belt of diamonds. Inside placed pull-out basket with snowdrops, the petals made of chalcedony, and pistils of demantoid. The egg closed at the top of the diamond clip. Round two-stage pedestal machined from bovenit, covered with paved diamond belt. And at the base of the cap decorated with gold ornaments rocaille. 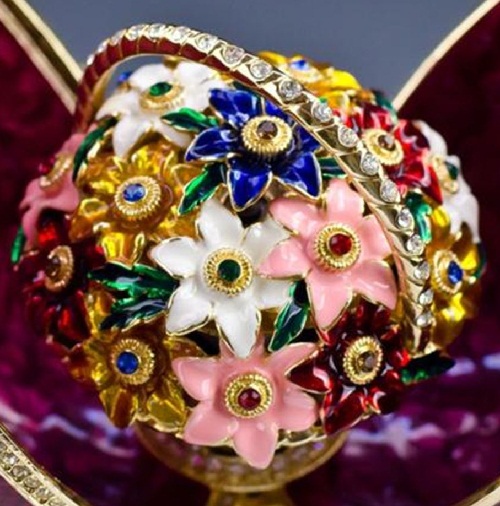 Presented by emperor Nicholas II, his wife Empress Alexandra Feodorovna on Easter 1886. All-Union Association “Antiques” that sells Russian imperial treasure, and in 1933 sold the egg “Spring Flowers” an unknown person at 2000 rubles (1000 dollars). Later it was sold by A La Vieille Russie collector from Long Island Landsdellu Christie, and then, in 1966, the same New York dealers Malcolm Forbes, as the Imperial Easter eggs.
Stored in the collection of the magazine “Forbes”, New York, USA .. Described by the egg was exposed twice as imperial Easter eggs in the museum The Metropolitan in New York – in 1961 and 1996.

Chanticleer Kelha egg has the motif of the Imperial eggs “cuckoo.” Jewelry manufactured by the firm of Carl Faberge in 1905, commissioned by Kelha. Opening in the shape of Easter eggs, covered with bright-blue, translucent enamel over guilloche zigzag, crowned with laurel sagging garlands entwined with ribbons of red gold. The egg is surrounded with a frieze, paved with pearls. white enamel dial painted with closed envelope every digit red and green ornaments of leaves and berries. Egg finished flat, ornamented openwork rosette, which is hidden under the “surprise” – Cock-chanticleer colorful and bright enamel, studded with diamonds. Each hour socket and leans out from under it raised chanticleer, who sings, flapping its wings and opening its beak.

On the reverse side of the egg has a round openwork door to the complex clockwork. The egg is at the foot, resting on a pedestal rectangular cross section with cut corners. Its concave side covered with the same plane as the egg, blue enamel with applied motifs emblematic color of gold, representing, on the front side – the attributes of Cupid – arrows and quiver in a wreath on one side – the cornucopia, and the other on the back side – the symbols of Arts and Sciences. Plane cut corners, base and frieze of the pedestal covered with a transparent pearl enamel on a guilloche background, clearly stands in the corners of gold acanthus leaves, from which hangs a garland, encircled with spiral cord with tassels.

The base and frieze – Father of the bill ornament (Plate), red gold, which runs a garland of bells green gold. Above the projecting part of the plinth is laid golden bay harness, interwoven with ribbons. The pedestal is slightly raised above the surface with a little flattened at the corners of the legs. Varvara Petrovna Bazanova for which it was made came from a very wealthy family of merchants of Moscow and was the wife of Russian businessman Kelha. Stored in the egg collection of Vekselberg. 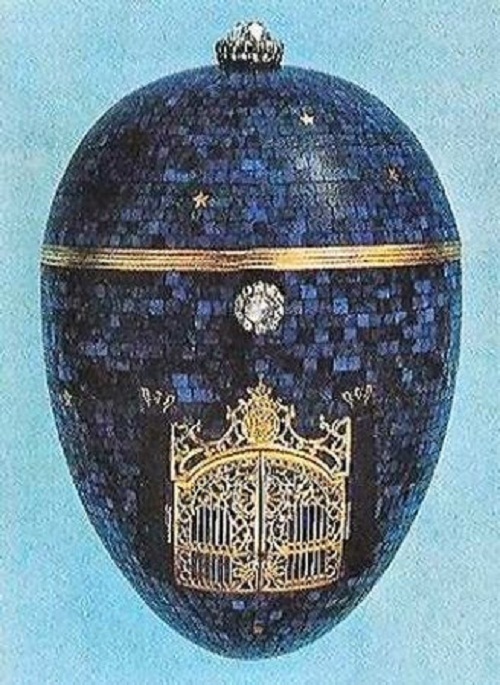 Twilight egg. Manufactured in 1917 by the imperial jeweler Carl Faberge. The author, produced an egg – is unknown. Whom it was given – is also unknown. Stored in a private collection in whose and where is also unknown. 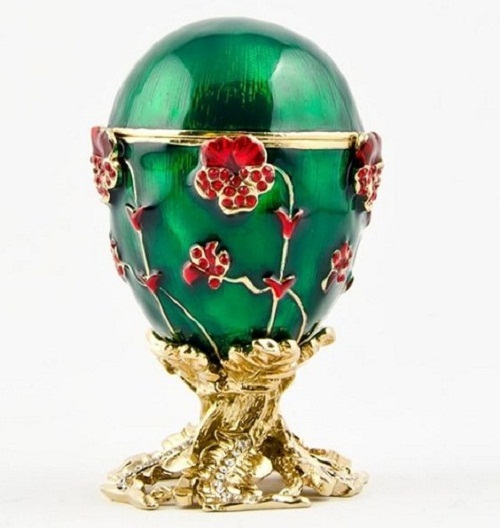 Pansies egg, presented to Emperor Nicholas II by his mother, Dowager Empress Maria Feodorovna on Easter 1899. Stored in the 30s in the Gallery Hummer, now in New Orleans in a private collection, USA

Egg – “Pansies” made in 1899, the brand-Faberge. Master jeweler Michael Perkhin. The egg is made of jade, gold, gilded silver, diamonds and enamel. Size – 14.6 cm Surprise eggs – gold easel on which there is a diamond in the center heart with enamel. At the heart of the easel-eleven ovals of red enamel, which are the initials of the Romanov family. All ellipses are disclosed and under them are miniature portraits of the Royal Family. 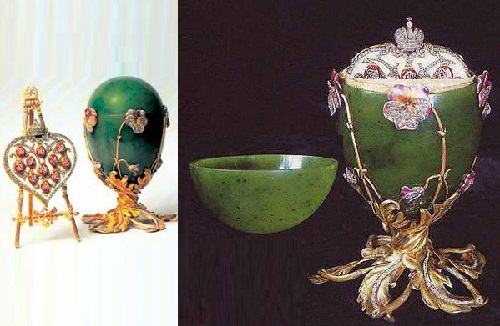 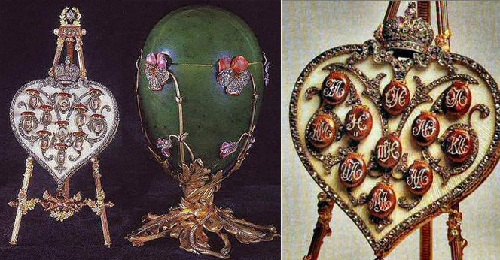