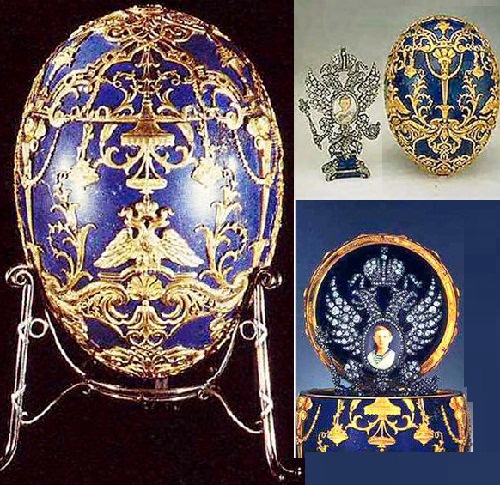 Masterpieces of jewellery art – Faberge eggs
Originally, “Prince” was a gift of the Empress Alexandra Feodorovna. Made in the style of Louis XV, like many of Faberge eggs, it has a surprise. In particular, the two-headed eagle with a diamond miniature portraits of Prince Alexei (presumably a copy of a lost miniatures). Currently, the egg is at the Art Museum, Richmond, Virginia, USA. 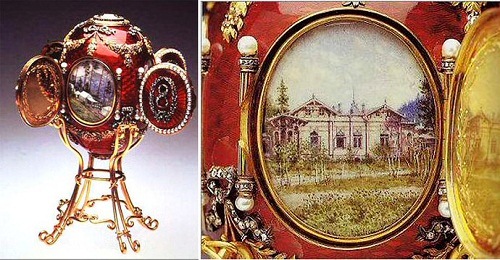 Caucasian egg. Made in the jewelry firm of Carl Faberge in 1893, master M. Perkhin.

The materials used in the manufacture of Caucasian egg – color gold, platinum, silver, translucent ruby enamel, ivory, diamonds, natural pearls east. Dimensions – 9.2 cm filled with eggs in the style of the late Louis XV and has three oval windows, with a lockable door and a border of pearls. In the center – a diamond wreath, which supports a number, in general, the figures indicate the year of manufacture eggs – 1893. For each species a door of the palace Abastumani in the Caucasus, Georgia.

Grand Duke George was ill with tuberculosis and spent most of his life there. Empress with their children lived there. Initially, the egg was in the Gallery of Hummers, New York, purchased from the Soviet government in 1927. At the present time it is in the Museum of Art in New Orleans, USA.

In total, from 1885 to 1917 by order of Alexander III and Nicholas II, were created about 56 masterpieces of Easter (the exact figure is unknown). Eggs are made in the workshop of Mikhail Perkin, which after his death, was led by Henry Wigstrom. Eggs differed by unprecedented luxury, wonderful imagination, consummate perfection of detail, masterly combination of different techniques. Never repeating themselves, they are particularly impressed with surprises contained in them – miniature replicas of the royal yachts and cruisers, with the finest gear, palaces with broken flower beds in front of them from the “fluffy” gold monuments strewn with stones, flowers or buds.

Of the 71 known eggs to have survived only 62. The vast majority of them are stored in public museums. Imperial egg known 54: to this day preserved 46 pieces, made by royal order, the rest are known from the descriptions, accounts and old photographs and considered lost.

Winter Egg – the most expensive egg paid for by the Romanovs (24 thousand). Egg made in 1913 by order of the Russian Emperor Nicholas II and Faberge jewelry firm was meant as a gift to Empress Maria Fedorovna. Egg made of crystal, opal and diamond. Surprise eggs – basket with anemones, decorated with diamonds and emeralds. At the present time is in the collection of the Emir of Qatar.

Rokaylnoe egg. Date of manufacture – 1902. Surprise egg – a heart with three miniatures, very similar to the surprise of the lost to our time imperial eggs – “Malvaceae” At the present time the egg is in private collections in the United States.

Vase Egg. Gold-plated shell covered with enamel over an agate sepia. Festoons of golden laurel leaves with a scattering ruby. Diamond-shaped areas covered with pale-blue enamel, on which grid scattered with pink diamonds. Below – pins with ruby heads. Despite the modesty of eggs, it is an example of the highest craftsmanship of Faberge jewelers. Whom it was given is unknown. Stored in the collection of the magazine “Forbes”, in New – York, USA.

Wedding anniversary Faberge egg. Egg to the Silver Jubilee of the imperial court made at the firm of Carl Faberge in 1892. Egg produced by a master jeweler Mikhail Perkin. The egg of gold, covered with blue enamel and diamond decorated with pink cut. Egg size – 8.3 cm. This egg was made to celebrate the 25 anniversary (silver) wedding anniversary of Empress Maria Fyodorovna, and Tsar Alexander III. Surprise – lost. Stored in the museum Hillwood, in a private collection, Washington, DC, USA.

Masterpiece by Mikhail Perkin – Enamel panels egg. Size – 11 cm, made of green, red and yellow gold, sapphires, diamonds, agate, ruby. Who was the first owner of the egg – is unknown, but presumably it was meant to Empress Maria Fedorovna. There is a version that it was presented to the prince. Now the egg is kept in a private collection of Stavros Niarchos, Paris.

Blue enamel Egg-clock, made in the tradition of Seversk porcelain. Clock – fixed by a snake. Made by Faberge in 1887. Master M.Perkin. Height – 18.5 cm from the dial of white enamel with small diamonds, pink diamonds are marked with numbers. The snake – a gold, studded with diamonds. Top – Diamond pineapple. Stand consists of three panels, representing the science, war, and a basket with a bouquet of flowers. An egg donated by the Emperor Alexis to his wife. Stored in a private collection of Prince Albert, Switzerland.

Egg-Surprise in the form of diamonds bordered heart covered with strawberry-red enamel on a guilloche background, with the date “1897”, laid out in diamonds is worth on the hexagonal stem, covered with white enamel painted in the form of a spiral winding the vine, the dome-shaped terraced grounds decorated with petals of gold, diamonds, strawberry-red enamel with gold and pearls. When you click on the leg of the heart, it opens, becoming a shamrock clover, covered with emerald-green enamel on a guilloche background, with a pattern in the form of diverging sunlight. In each lobe – a miniature portrait in a diamond frame, in one – Nicholas II, the second – his wife Empress Alexandra Fyodorovna, the third – Grand Duchess Olga Nikolaevna in infancy. The petals of clover close by clicking on one of the jewels, mounted on the base. The egg was presented to the mother of the emperor – empress, which Nicholas II presented to Empress Maria Feodorovna, on Easter 1897.

Egg ‘Danish anniversary’ made in 1903 by Faberge jewelry, was meant as a gift to Empress Maria Fedorovna. Surprise eggs of King Christian and Queen Louise, who were the parents of the Russian Empress. The egg was devoted to 40th anniversary of their accession to the throne. Location of the eggs is unknown.

“Travel Wallet” performed in 1889 by imperial court jeweler Carl Faberge. “Travel Wallet” contained a manicure set of 13 items. Location of collection is unknown. The last known price at auction was the sum of three million dollars. 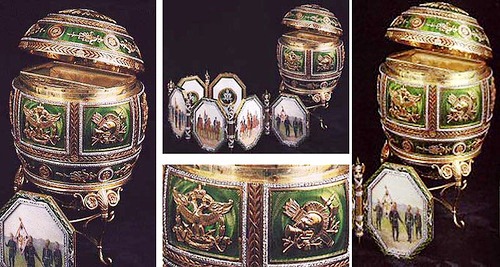 Caucasian egg. Gold, base twisted. Donated by the Emperor to his wife Empress Maria Fedorovna for Easter 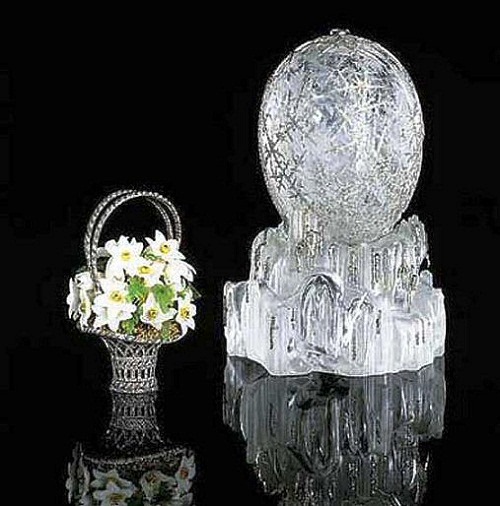 “Rokaylnoe” egg. Manufactured by masters of the Imperial jeweler Faberge 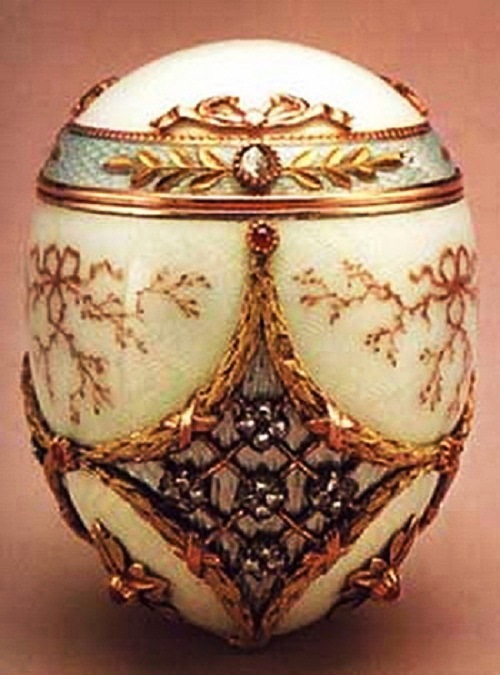 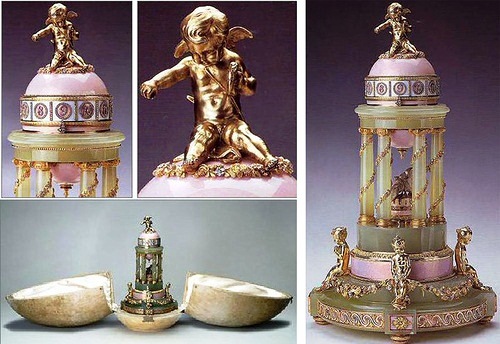 Vase egg, little box in which it is able to keep the sugar lozenges, popular at the beginning of the century 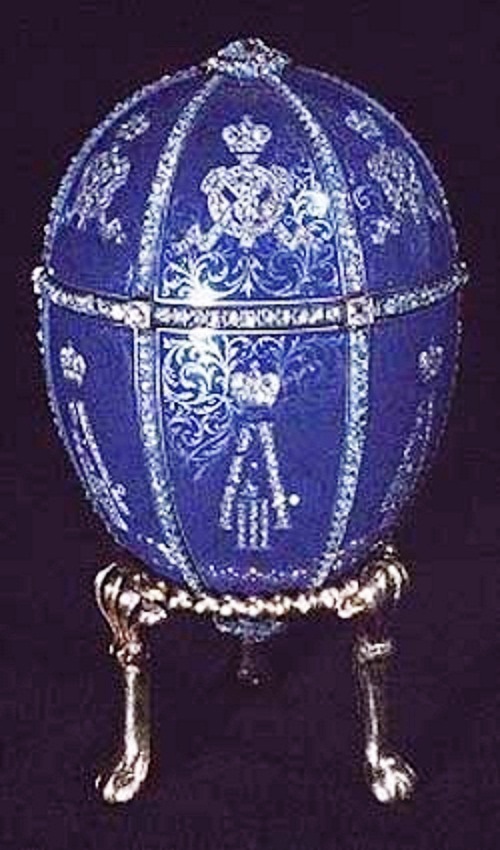 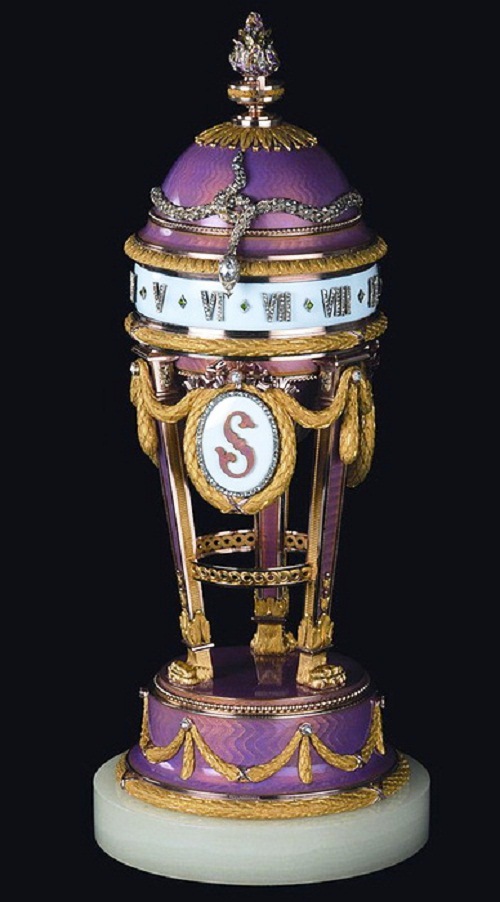 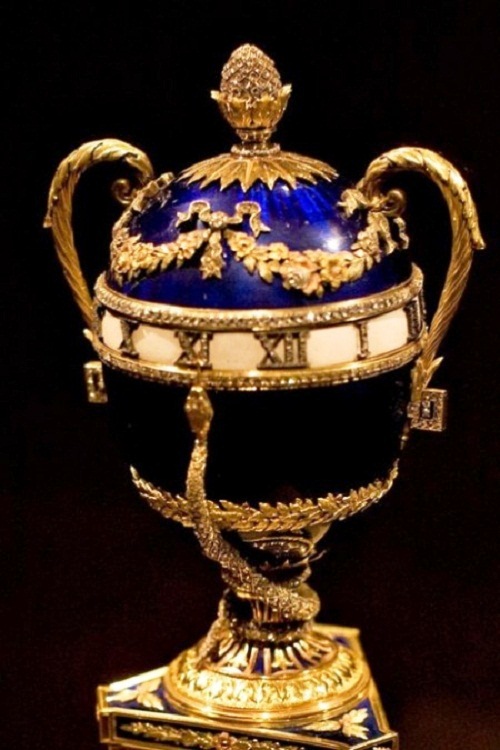 “Memorial of Alexander III” Faberge egg. Made by order of the imperial court as a gift to Empress Alexandra Fyodorovna by court jeweler Carl Faberge in 1909. Surprise – a miniature bust

Frame – a surprise in the shape of a heart, lost imperial Easter egg made of gold, enamel and precious stones. Faberge, 1897

“Travel Wallet.” Gift of the Emperor Alexander III, to his wife Maria Feodorovna on Easter