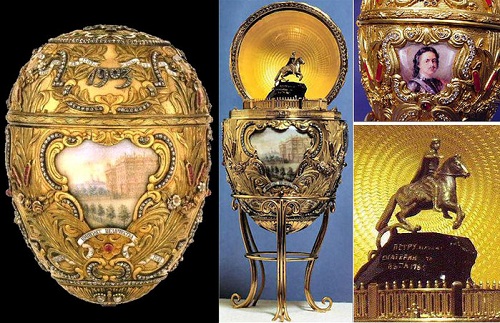 Egg – the monument to Peter I, work marked by Faberge. Made by a jeweler master Michael Perkhin in 1903 at the jewelry firm of his Imperial Majesty Nicholas II. Carl Faberge Easter eggs

Carl Faberge Easter eggs
The size of an egg – Gold, 11 cm, color gold, diamonds, sapphires, ruby and opal, white enamel. Made in the Rococo style. Surprise egg – the monument is the model of Peter I monument (The Bronze Horseman) in St. Petersburg. The egg was given by the Emperor on Easter 1903 to his wife Empress Alexandra Fyodorovna. Stored in the Museum of Fine Arts in Richmond, in the collection of Lillian Pratt. Virginia, USA. 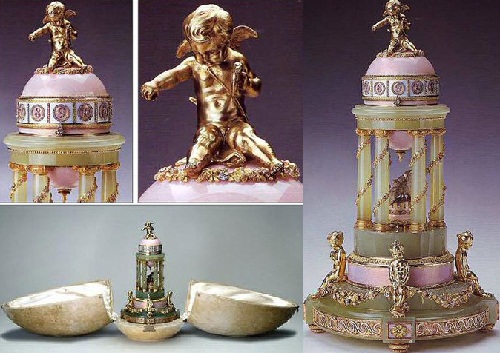 An egg with a colonnade done on Faberge Firm in 1905. Master jeweler – Henry Wigstrom

In the manufacture of eggs were used Bowen, colored gold, diamonds, platinum. The egg was designed as a temple of love in Arcadia. Egg-clock was made in memory of the birth of the long-awaited son – Prince Alexei, the heir to the Russian throne. The egg is covered with a transparent pink enamel. At the top of the dial where the numbers are laid out with diamonds. Gilded Cupid – an allegory of the prince, is located on the egg. Green colonnade supports the egg and from it comes the same hand of the clock. Four cherubim of gilded silver, the image of the emperor daughters, they sit at the base of the composition. Connecting them garlands made of colored gold and decorated with diamonds. In the center of the colonnade there are two platinum doves. An egg was donated by Emperor Nicholas II to his wife Empress Alexandra Feodorovna on Easter 1905. Purchased by Queen Mary. Stored in the Queen Elizabeth II collection. 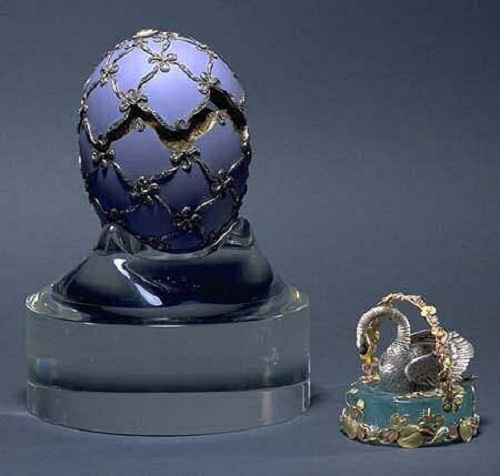 Materials used in the egg with a swan – color gold, diamonds, platinum, aquamarine and enamel. The shell of the egg is opened, and there is a swan figure, floating in a small lake with golden lilies. If you start a mechanism which is under the wing of a swan, the bird begins to glide through the water, wiggling its webbed feet. Swan makes a specific movement of the tail. Swan’s head and elongated neck up and down, wings open and you can see every feather on the wing of a bird. The egg was presented to the emperor’s wife Empress Alexandra Feodorovna. Stored in a private collection of the heirs of Maurice Sandoz, Switzerland. 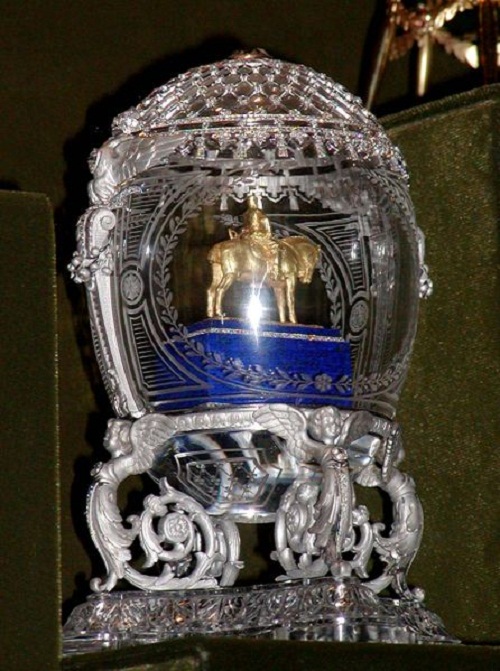 An egg with a model of the monument to Alexander III. The egg is embedded in a case. Made by the jewelry firm of Carl Faberge in 1910. The master is unknown

Model of the monument is made of gold on the plinth of lapis lazuli, and reproduces the monument by sculptor Trubetskoy, erected on the square of St. Petersburg near the Znamensky Nikolaevsk station.

According to the edict of Nicholas II – the egg is done in memory of his father. Egg – a gift of Nicholas II, to Empress Maria Feodorovna on Easter 1910. Stored in the State Museums of the Moscow Kremlin. Received from the People’s Commissariat of the Monetary Fund in 1927. 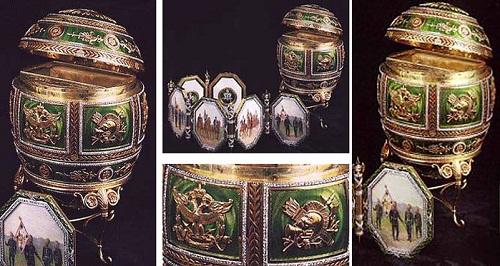 Egg is made of yellow gold, platinum, ivory, covered with enamel. Precious stones – diamonds. Done in the Empire style. Six panels on the egg with gold appliques double-headed eagle of the Romanovs. The panels are separated by patterns of scrolls and leaves. Egg topped with a golden sun, trimmed with diamonds. In the center – a large diamond with a crown and monogram of the Dowager Empress Maria Feodorovna. Surprise – 6 panel folding screen, which shows the representatives of the regiments of the Empress. Miniatures executed by court painter Zuev. The panels are covered with green enamel and edged with diamonds. The egg was given by Nicholas II to his mother – the Dowager Empress Maria Feodorovna on Easter 1912. Egg was sold by the Soviet government in 1927, the gallery Hammer in New York. At the present time is stored in the collection fund Matilda Geddings Gray of New Orleans, USA.

The egg was not made for the imperial court. It is the embodiment of those sweet dreams that make jewelry flourished in Russia. The egg is the stigma of court jewelry firm of Carl Faberge. Master, produce it, is Michael Perkhin. Size – 5 cm gold, diamonds and enamel. Buckle eggs hidden under the green akantus leaves. Surprise eggs – a rabbit who sits hiding in the green grass, and is made of green chalcedony, and eyes of chrysolite. Who owned it – is unknown. 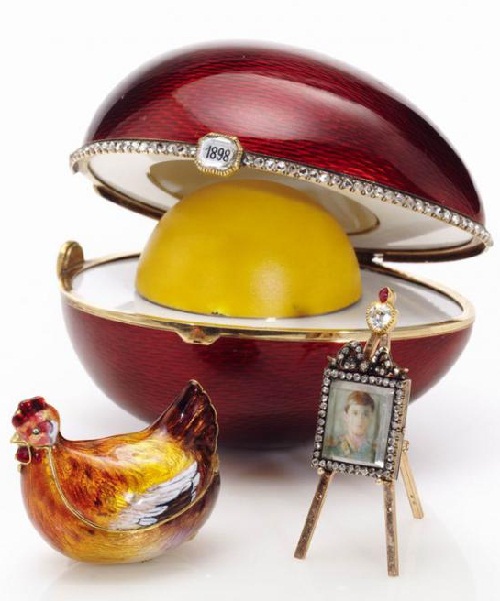 Egg with the chicken

Egg with the chicken. Made in 1898 by jeweler Faberge. Master – Michael Perkhin. Size – 8.4 cm x 8.2 cm egg is covered with enamel on a gold background and surrounded with diamonds, it is on a gold stand. Inside the egg – the yolk made of gold, in the yolk of a little gold chicken surprise. Hen painted with colored enamel. Its size – 3.5 cm inside the chicken one more surprise – a folding easel. On it in gold frame with diamonds with Portrait of Tsarevich Alexei in uniform arrow Guards of His Imperial Majesty. Thumbnail size – 4.2 cm 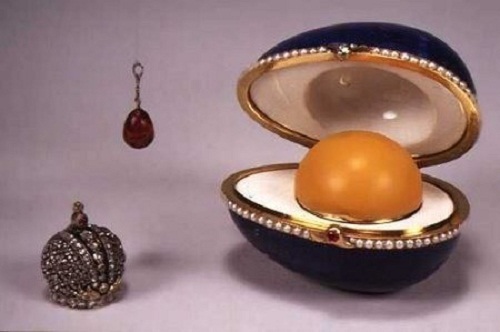 The work of Faberge jewelry. It is known under the name – “Bloodstone.”

The work of Faberge jewelry. It is known under the name – “Bloodstone.” Inside a surprise – a miniature imperial crown and a ruby pendant in the form of eggs. Copy of the imperial eggs – “Hen.” Presumably, this work was done as a gift to his wife, Zinaida Yusupova. However, the official version, the owner is unknown. Egg produced in 1886. Stored in the Cleveland Museum of Art, USA.

On the subject is an egg like the first egg, made for the royal family by Carl Faberge. The egg is a series of jewelry, which were made by Faberge for the Russian businessman Kelh. Donated by Kelh in 1898 to his wife Barbara Bazanova on Easter. Egg – a collection of Vekselberg.