She was the first female impressionist. Her artistic heritage consists of about 400 paintings. Her life was bright, but quite short. It’s about Berthe Morisot. French impressionist painter Berthe Morisot (January 14, 1841 – March 2, 1895) was born in the French town of Bourges, in a very cultural and wealthy family. Since childhood, Bertha and her sister Edma showed ability to draw. First, with the artists worked Guichard, who also noticed an artistic talent in both sisters, and yet expressed concern about their future. After all, it was doubtful that a girl from a respectable bourgeois family could become a painter. But soon Bertha outgrown her teacher.

And then, Berthe Morisot became acquainted with the famous artist Camille Caro, who taught her, and became a friend of the family. This was him who taught Berthoud to express the play of light in her paintings and paint landscapes. Already in 1864, a few landscapes of 23 -year-old Bertha were exhibited at the Salon, the official annual exposure of Paris Academy of Fine Arts. 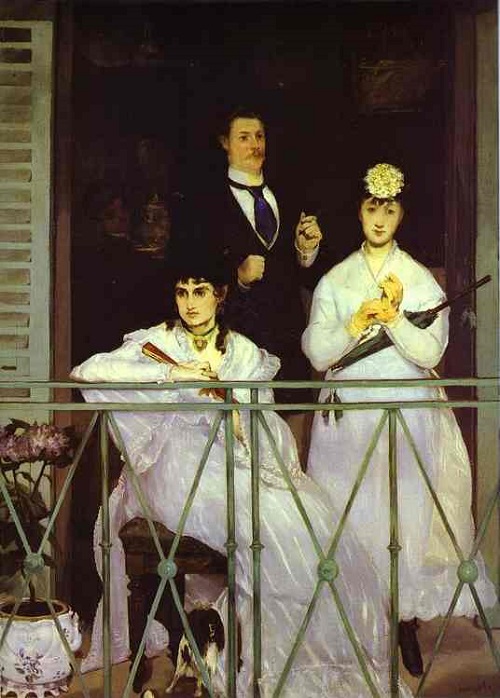 The Balcony, 1868 oil painting by the French painter Edouard Manet

In 1868 there was a landmark meeting with Edouard Manet, to whom she had long felt a sense of excitement. The meeting took place in the halls of the Louvre. Manet became seriously interested in a girl, but despite his freedom relations and infidelity to his wife, kept up appearances. Bertha, who was fascinated by the artist not only as a creator, but as a man, also skillfully suppressed her feelings. When he asked her to pose for the paintings “The Balcony”, she was always on the sessions accompanied by her mother. After this painting appeared at the Salon in 1869, Bertha acquired the title of the femme fatale. 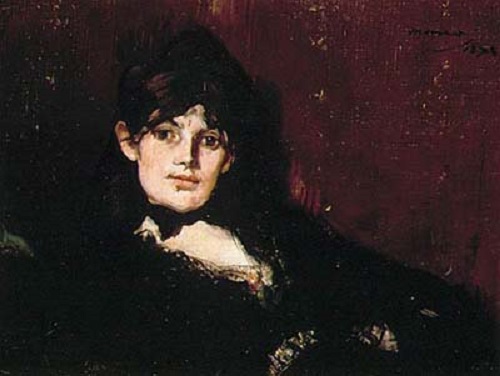 Between Berthe and Manet stemmed secret, unspoken love, crushed the need to respect the social proprieties. Morisot posed for the artist, sometimes staying with him alone already, but continuing to stay within strict standards. During these sessions, they talked about everything. Manet painted Morisot on his 16 canvases, where she usually appeared in a sad way. The last one is dated to 1874. That year Berthe married Manet’s younger brother Eugene. Since then she has never posed for Edward.

Edouard Manet, Berthe Morisot with a Bouquet of Violets, 1872

Why she married Eugene – remains a question. Maybe she wanted to keep in touch with Edward, and perhaps of age – Berthe was at that time 33 years old, and at that age at the time a woman was not supposed to be alone. Berthe’s mother actively urged her to this marriage, despite that she thought of her potential son-in-law to be three-quarters crazy. The marriage proved to be quite successful. Eugene Manet didn’t exhibit his own work, but strongly supported Berthe and prepared her paintings at the exhibition. Their house was constantly visited by poets, musicians and artists – Renoir and Degas, Claude Monet and Renoir, Henri de Regnier and Stephane Mallarme. 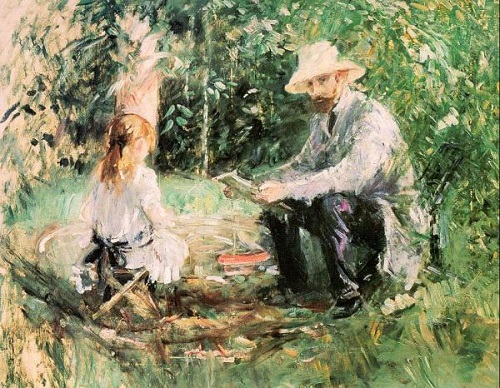 Impressionist painter Berthe Morisot. Eugene Manet and his daughter Julie in the garden 1884

In 1878 the couple had a daughter, Julie, who has now become the main theme of the artist’s creativity. She tried to capture every moment of a girl’s life – in oil, watercolor, pastels. As models she willingly used sisters, nieces. Morisot depicted the society – people on her paintings live in beautiful houses and eat at a posh pot, play music and walk with the dogs, water the flowers and admire the sunsets. And of course the main theme – comfort, maternity, warmth and quiet family happiness.

Later Berthe Morisot actively participated in all exhibitions of the Impressionists, and only once missed, due to her illness.

In her family, it seemed that all was well and stable. Daughter Julie took much after her parents and showed a talent for painting. But once in a letter to her sister Berthe wrote: “Today I feel terribly depressed, tired, irritable, just not at ease. This once again proves to me that the joy of motherhood – not for me. There are days when I want to complain bitterly about the unfairness of fate. Work is bad and does not bring me comfort. Every time the same story, never know where to start … I almost do nothing, and what little is done, seems to me a nightmare”.

In 1883, Edouard Manet died, he had recently suffered after the serious operation – his leg was amputated. Berthe was at the bedside of a dying man, was a witness to his dying agony, and it all immensely shocked her. After the death of a dear to her person, she and her husband organized a retrospective exhibition of his works.

And then Eugene’s health has worsened. He became nervous and irritable. That time they were often visited by Renoir. Eugene died in 1892. By the time Morisot has also lost her parents. However, her paintings, oddly enough, continued to carry the peace and quiet beauty. Women and girls in ball gowns, dancing children. Then had to write ” Julie Manet with a dog ,” ” Dreaming Julie ,” ” Summer Day” …

And in 1895, the artist herself was seriously ill with flu epidemic which raged then in Paris. March 2 Morisot died. She was only 54. “I stayed in Paris to be at the funeral of our old friend Berthe Morisot – she died of influenza. You can not imagine how we were amazed and saddened by the death of this charming artist with such a charming feminine flair adorning our Impressionist group” – wrote his son Camille Pissarro. “Learning from a telegram of her death, we cast away the brush, rushed to the station. I thought I was alone in the desert” – echoed Renoir.

Stephane Mallarme became the guardian of her daughter. In 1900 she married the son of artist Henri Ruari, Ernest. 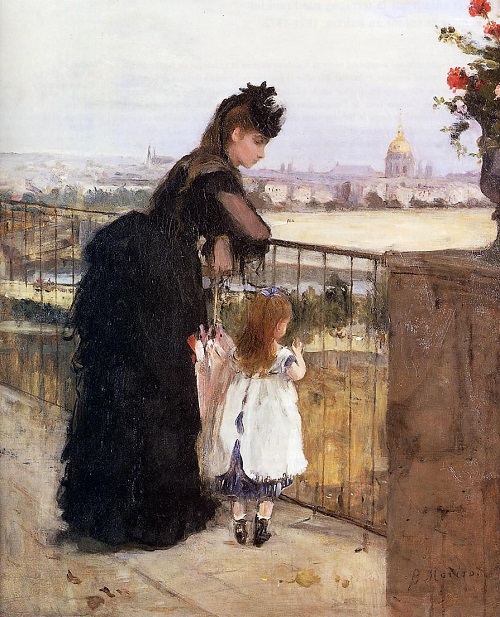 Woman and Child on a Balcony. Painting by French impressionist painter Berthe Morisot 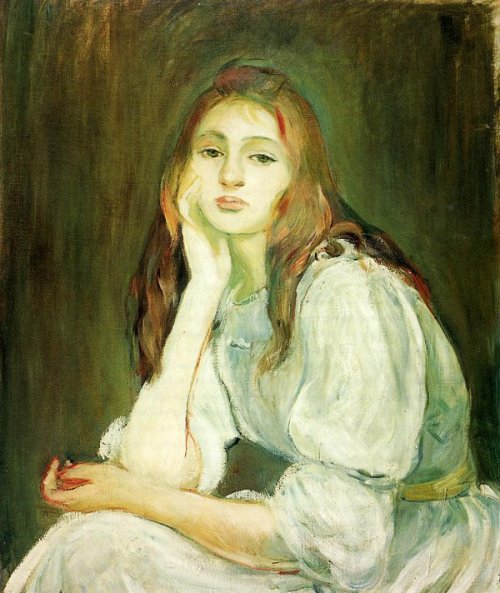 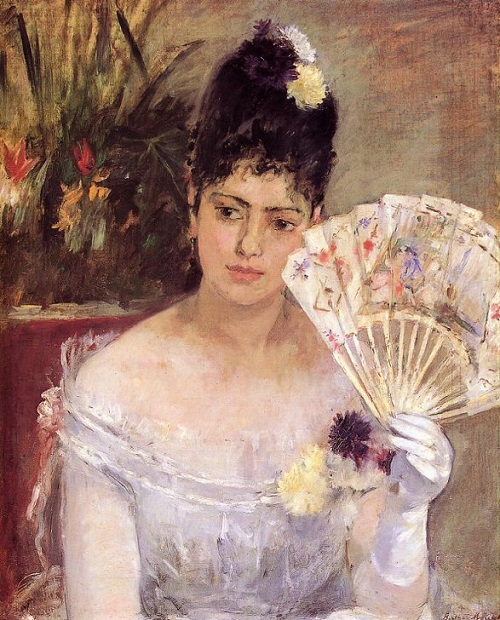 At the ball, 1875, painting by Berthe Morisot 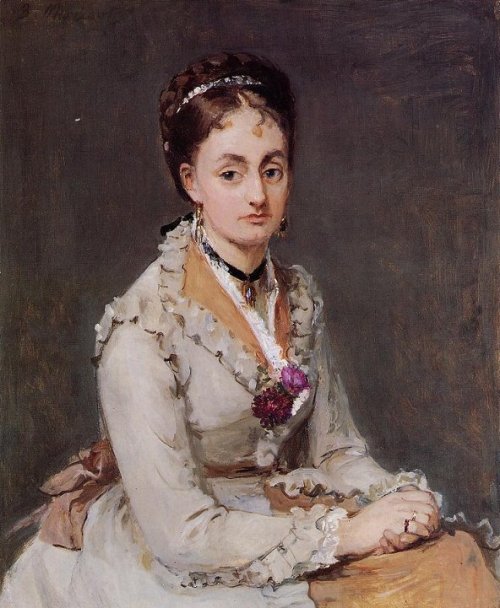 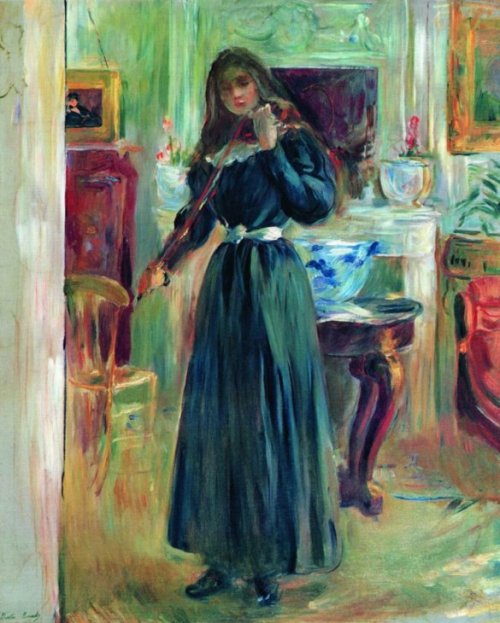 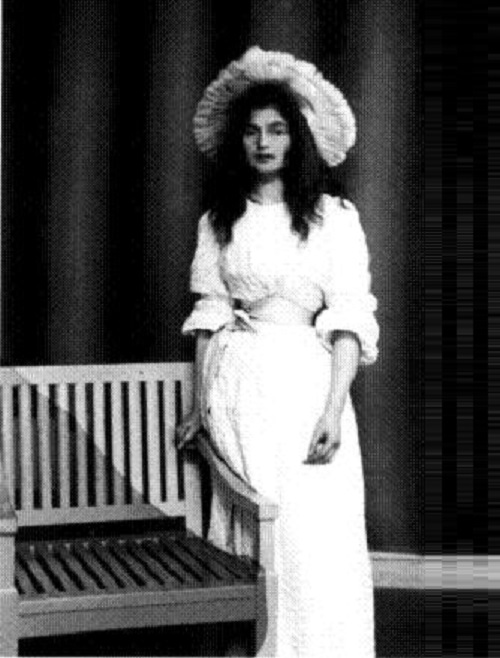 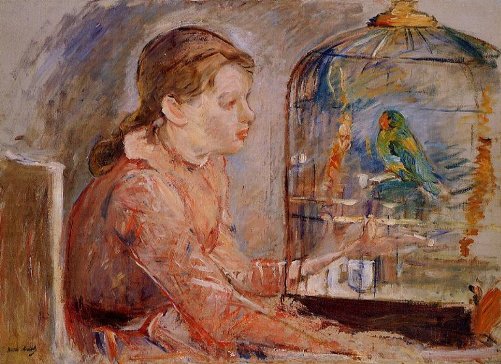 Girl with a parrot, painting by Berthe Morisot 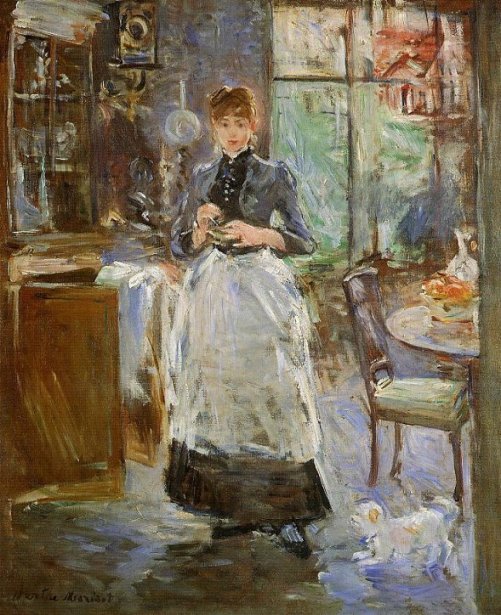 In the dining room, 1876, painting by Berthe Morisot 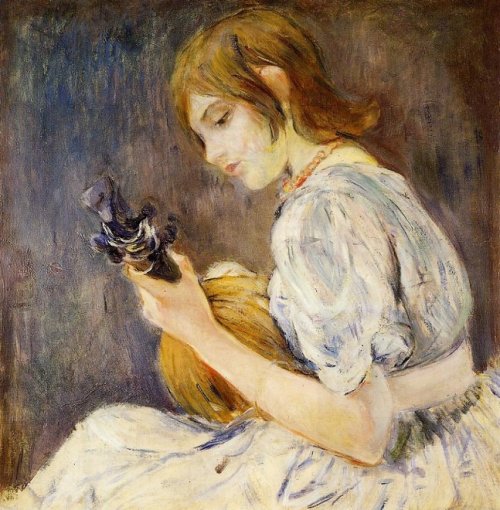 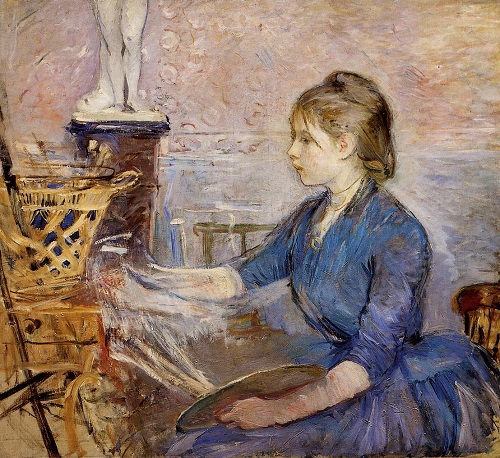 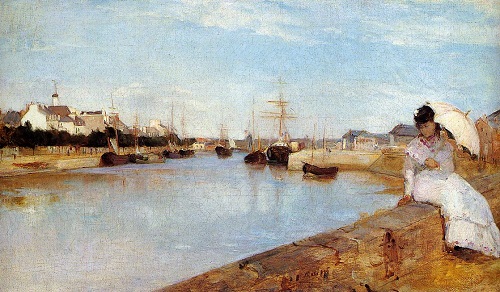 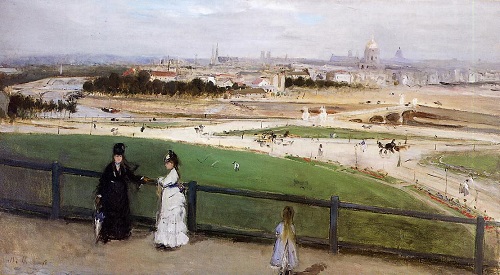 View of Paris from the Trocadero Heights, by French impressionist painter Berthe Morisot