French village of Bugarach
Located in southern France, the village of Bugarach has a population of only 179 people. According to doomsday cults, it is the only place in the world that is going to survive Armageddon. And some people believe, doomsday is December 21 this year (2012). The small village, in fact, – two streets, one shop, two restaurants, one tiny church, one bar (closed), dozens of circling eagles and a population of just 179. And still, it is the only place in the world that will be saved. Those who know better say, its salvation centers – round a 4,000 ft mountain. According to enthusiasts, the Pic de Bugarach is actually home to an enormous hidden UFO garage. And there aliens are patiently waiting for Friday, December 21. Then they’ll scoop up all human ‘future survivors’ nearby and beam them off to safety. 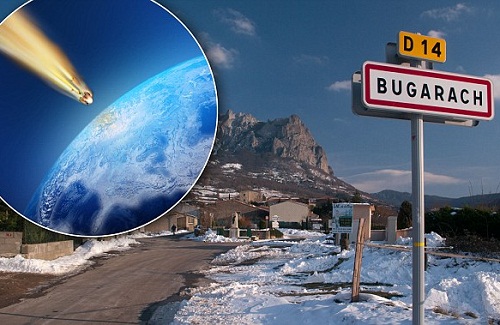 The geology of the Pic de Bugarach — with the rocks at the top older than the ones at the bottom — has earned it the description of ‘the upside-down mountain’. Its numerous caves are said to have inspired Jules Verne to Journey To The Center Of The Earth. It’s also said to attract UFOs, to cause compasses and cameras to jam, and to emit shafts of light at night.

Prices in the village rose – rooms, sofas and lawns (for camping) are offered out for rent at astronomical prices — €500 for B&B and €400 to pitch a tent on December 20th and 21st

The hippy cults live in makeshift bunkers dug beneath the village. €800 ‘cash only’ residential courses where ‘believers’ would meet a guru and parade up the mountain in white robes. In addition, other UFO spotters arrive from around the world on one-way tickets. House prices in the village rose. So are the rooms, sofas and lawns (for camping). The offered out rent is at astronomical prices — €500 for B&B and €400 to pitch a tent on December 20th and 21st. 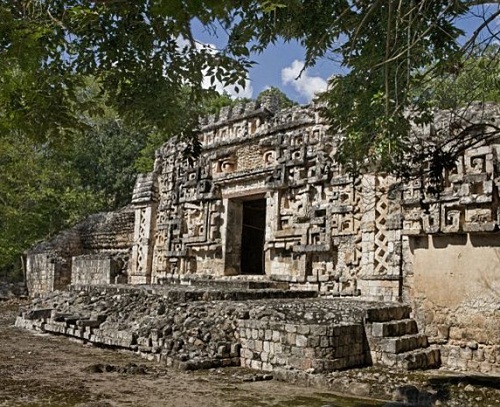 For centuries, historians have been aware that the 5,125-year calendar of the ancient Mayan civilization, which was settled predominantly in Central America, is due to run out this December 21. Ancient Mayans claimed that on December 21 2012, a 5,125-year cycle known as the Long Count supposedly comes to a close. 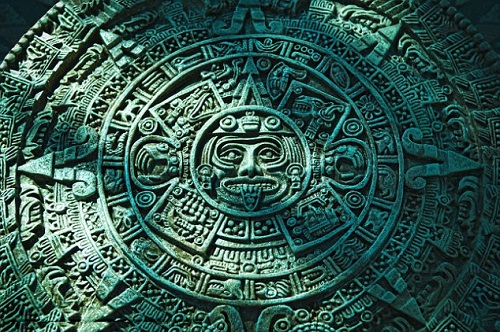 Ancient Mayans claimed that on December 21 2012, a 5,125-year cycle known as the Long Count supposedly comes to a close.

Experts estimate the system, which is made up of 394-year periods called baktuns, starts counting at 3114 BC, and will have run through 13 baktuns, or 5,125 years, around December 21. They say, 13 was a significant number for the Maya, and the end of that cycle would be a milestone — but they have been keen to stress that it does not mark an end. 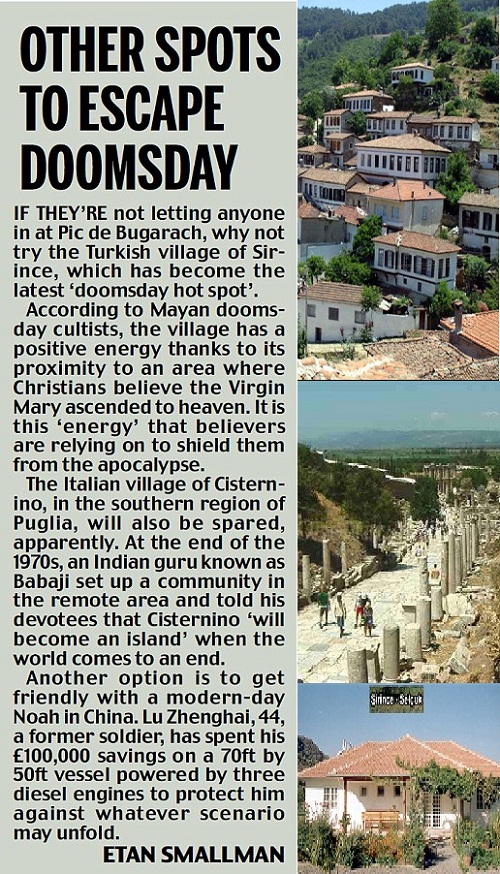 Nevertheless, conspiracy theorists believe the Maya may have been privy to impending astronomical disasters that would coincide with 2012. These disasters range from explosive storms on the surface of the sun that could knock out power grids to a galactic alignment that could trigger a reversal in Earth’s magnetic field. 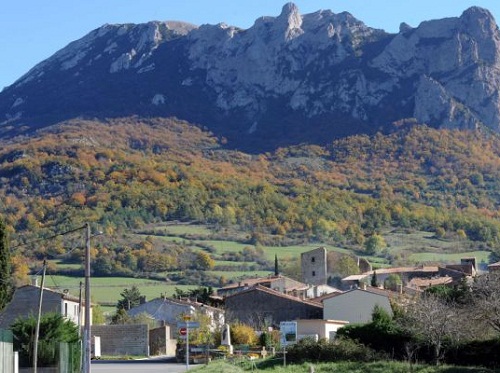 According to ancient cult, the only place to survive Armageddon, French village of Bugarach