Hundreds of caged canines saved from the cooking pot 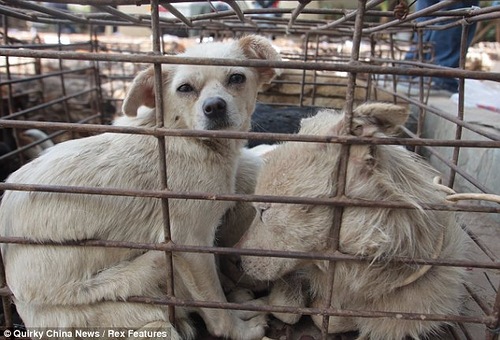 Dogs destined to be slaughtered and served up in China’s restaurants. Hundreds of caged canines saved from the cooking pot

Hundreds of caged canines saved from the cooking pot
Quick-thinking Chinese activists saved poor animals when the truck transporting them. The animal rights activists stopped the vehicle, carrying 505 canines packed into just 156 tiny cages. It was in Yunnan Province’s highway from Fumin to Kunming after other drivers spotted its sickening cargo. Horrifyingly, officers from the local Animal Inspection Department investigating the matter discovered that the transportation of the dogs was legal. The person who owned them did indeed have a license and police were unable to act despite suspecting the dogs were headed for dog meat restaurants. 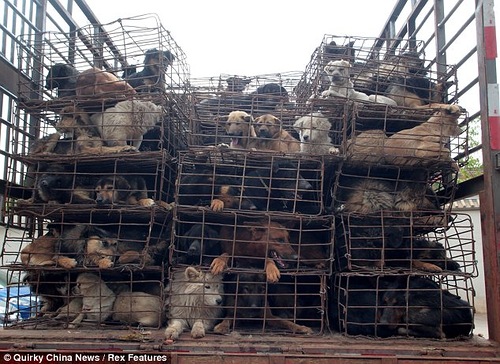 Another activist added: ‘We can’t stop them from eating dogs, as we don’t have an animal welfare law. We just hope the government could stop dog mongers from doing dog business.’
However, a private dog rescue center then stepped forward and brought all of the dogs off their owner for 60,000 Yuan (5,900 USD). The animals will now be cared for until new owners can be found for them. 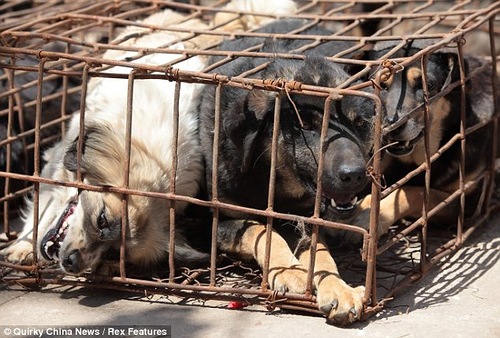 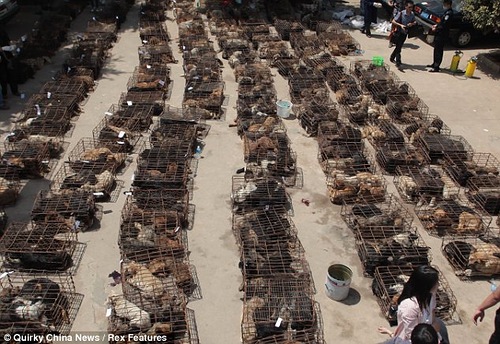 China: Although the Chinese were the first to domesticate the dog and keep them as pets, dog meat has been a source of food from at least the time of Confucius, and possibly even before.

Indonesia: Eating dog meat is usually associated with people from the Batak Toba culture, who cook a traditional dish named saksang that is like a dog-meat stew.

Mexico: Dogs were historically bred for their meat by the Aztecs. These dogs were called itzcuintlis, and were often pictured on pre-Columbian Mexican pottery.

Philippines: In the capital city of Manila,the law specifically prohibits the killing and selling of dogs for food except in certain circumstances including research and animal population control.

Polynesia: Dogs were historically eaten in Tahiti and other islands of Polynesia at the time of first European contact in 1769.

Taiwan: Dog meat in Taiwan is particularly eaten in the winter months, especially black dogs, which are believed to help retain body warmth.

Hundreds of caged canines saved from the cooking pot 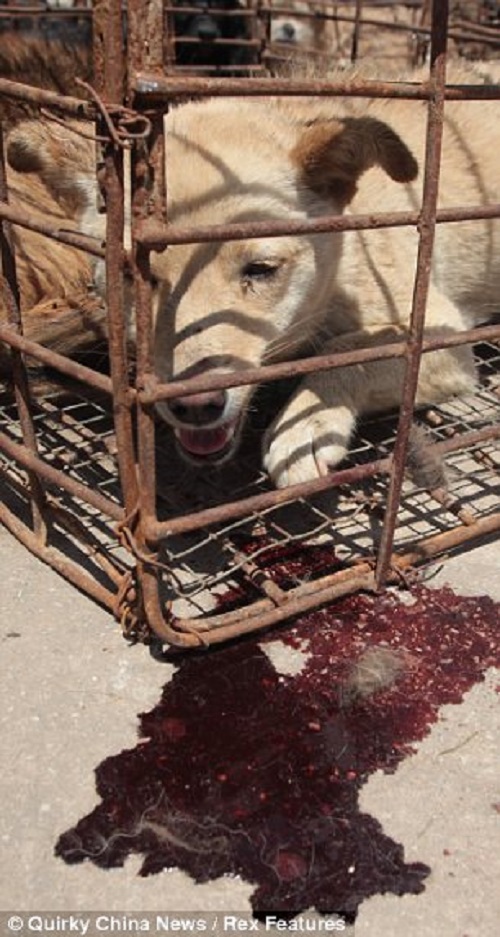 Korea: Gaegogi literally means ‘dog meat’ in Korean. Gaegogi, however, is often mistaken as the term for Korean soup made from dog meat, bosintang. The distaste felt by dog lovers, particularly from the West, has made this dish very controversial.

Switzerland: According to a Swiss newspaper report in 1996, the Swiss rural cantons of Appenzell and St. Gallen are known to have had a tradition of eating dogs, curing dog meat into jerky and sausages, as well as using the lard for medicinal purposes.

Vietnam: Dog meat is eaten throughout Vietnam. To many Northerners, it is a popular, if relatively expensive, dinnertime restaurant meal.

Arctic and Antarctic: Dogs have historically been an emergency food source for various peoples in Siberia, Alaska, northern Canada, and Greenland. Sled dogs are usually maintained for pulling sleds, but occasionally are eaten when no other food is available.