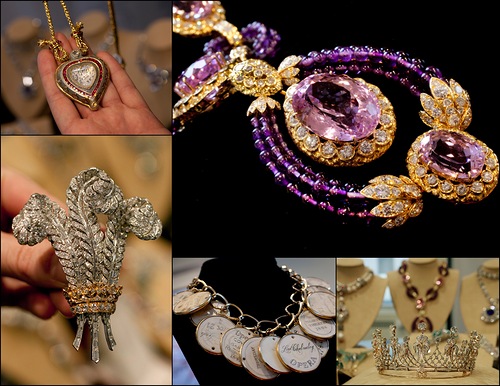 Liz Taylor’s jewelry in Moscow
A collection of Elizabeth Taylor’s jewelry was on display in Moscow. From Moscow, the starting point for its world tour, Taylor’s collection will travel to London, Los Angeles, Dubai, Geneva, Paris, Hong Kong and finally New York. In fact, it’s a last destination, before it goes on sale at a Christie’s auction in December.
One of the most significant pieces in the collection is the 8.24-carat ruby and diamond ring by Van Cleef & Arpels. Taylor received it for Christmas from her lover and twice husband Richard Burton in 1968. According to Taylor, the ruby in this ring the most perfectly-cut precious stone that she had ever seen. 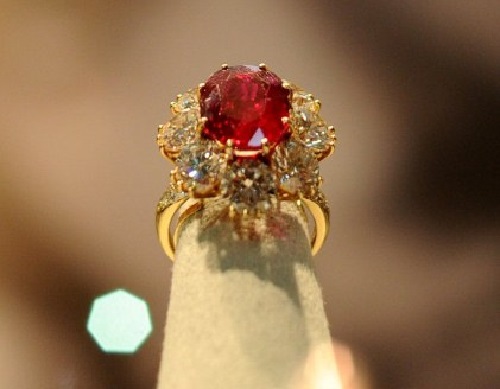 Apart from her beloved gemstones, Christie’s exhibition showcases a collection of Taylor’s clothes, where each item has its own story. A sequin-embellished dress by Arnold Scaasi that Taylor wore in 1992 during a perfume award ceremony for her White Diamonds fragrance.

Meanwhile, Richard Burton described Taylor’s jewelry passion by his famous quote: “I introduced Liz to beer, she introduced me to Bulgari.” Burton once said that “Bulgari” was the only Italian word Elizabeth knew. She first discovered Bulgari in 1962 while filming in “Cleopatra” in Rome. “Undeniably, one of the biggest advantages to working on Cleopatra in Rome, was Bulgari’s shop,” Taylor said in her book “My Love Affair with Jewelry.” 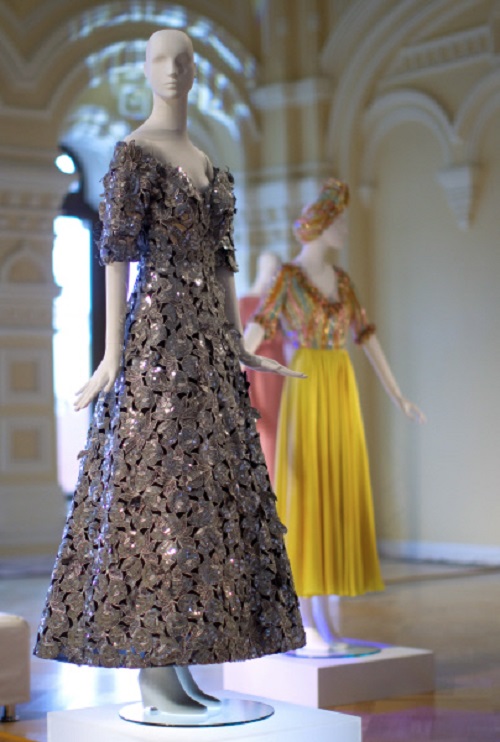 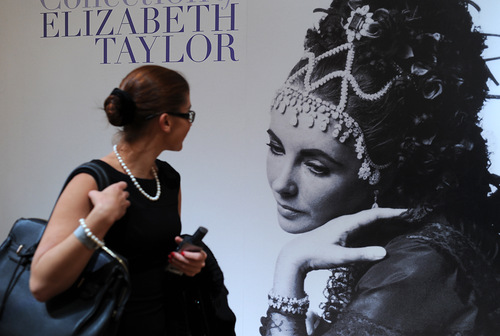 A woman looks at a poster of Elizabeth Taylor’s jewelry public exhibition in GUM on Moscow’s Red Square, on September 14, 2011 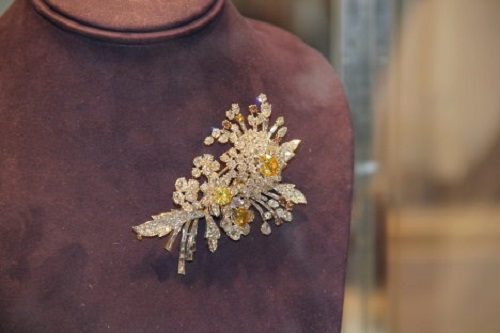 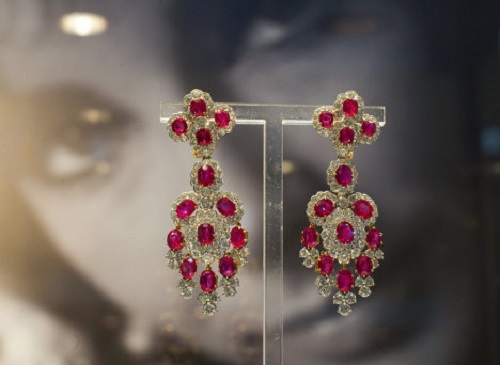 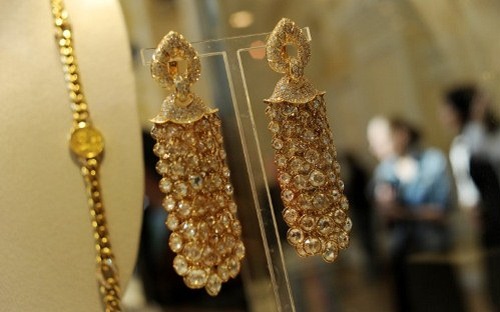 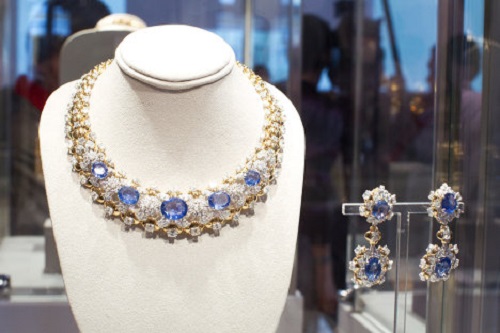 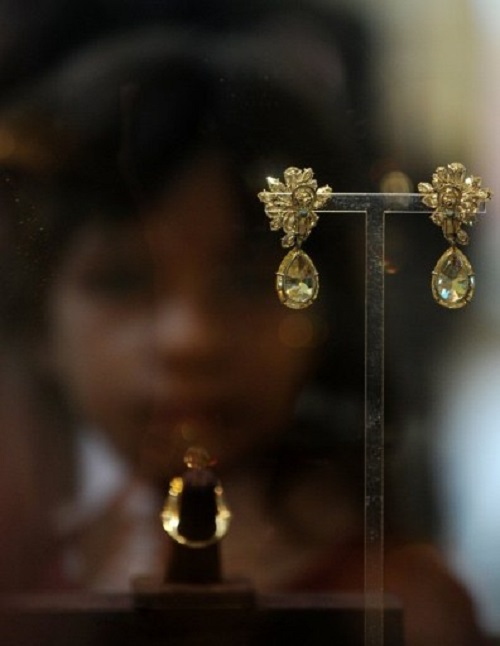 Taylor’s earrings are displayed at a public exhibition in GUM on Moscow’s Red Square, on September 14, 2011, shortly after the exhibition opening 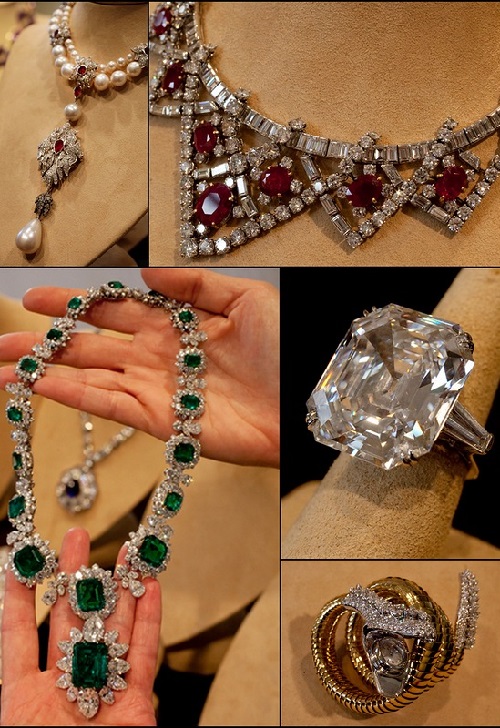 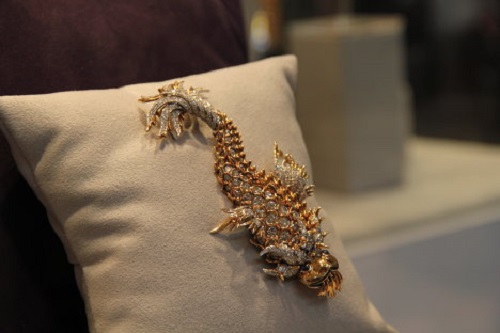 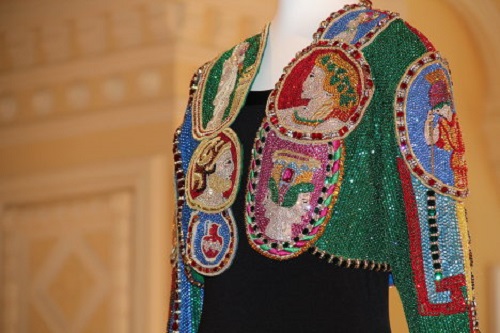 Versace bolero, decorated with Greek profiles. Taylor had several boleros in her collection. Embellished with her sequin-made portraits and ancient profiles. She wore this one during a charity event for her AIDS foundation in 1992

You can’t cry on a diamond’s shoulder and diamonds won’t keep you warm at night. But they are sure fun when the sun shines. Elizabeth Taylor