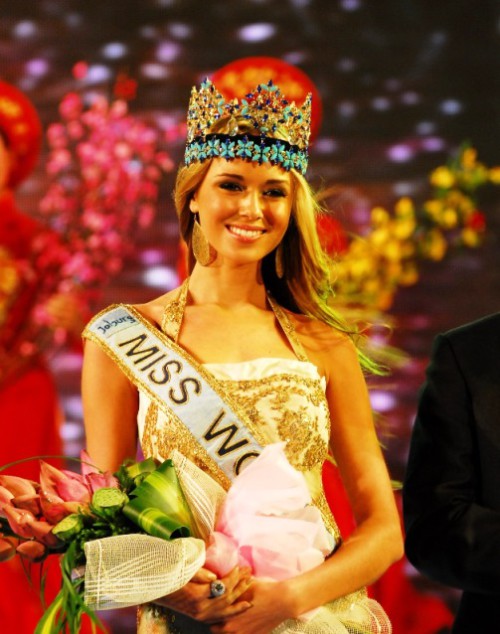 Miss Universe Russian folk dress
Defile in national costumes – always one of the most spectacular parts of the beauty-contests. Especially when it comes to the “Miss Universe”, which this year will take place in Moscow. Anxiously waiting in the wings of the stage – female candidates of our country Miss Russia (2013 it will be Elmira Abdrazakova), and let’s see outfits of Russian participants of all years. Pavlovo Posad shawls, kokoshniks, Gzhel, Khokhloma patterns, and Vologda lace. For designers it takes much skills, imagination, time, taste to make a folk dress which will conquer all, so that the contestant will stand out among other, not less bright competitors. 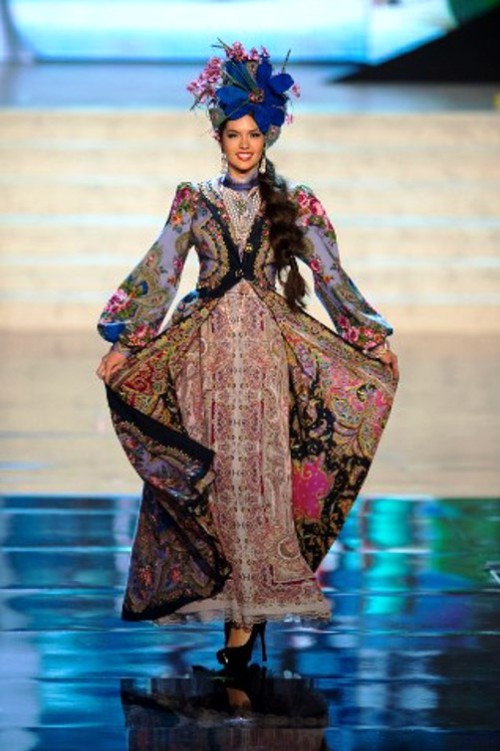 Elizaveta Golovanova, 2012. Feminine improvisation on the theme of Pavlovo Posadsk shawls and wildflowers from designer Slava Zaitsev has pleased the jury, our candidate was one of the 10 most beautiful girls in the Universe. 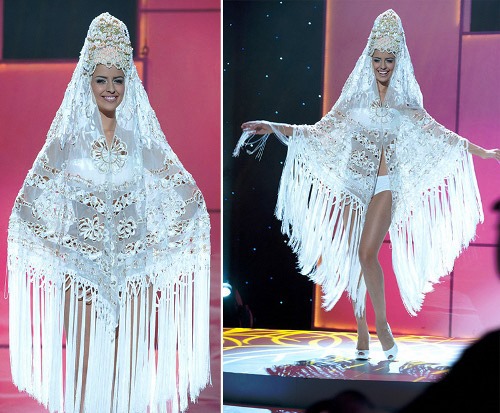 Natalia Gantimurova, 2011. Natalia Gantimurova comes from an ancient noble family, but, alas, failed to demonstrate folk dress. Russian girl appeared in a very playful national costume of a white lace and … bikini, as it was seen by the creator Valentin Yudashkin. The judges did not appreciate the extravagance. 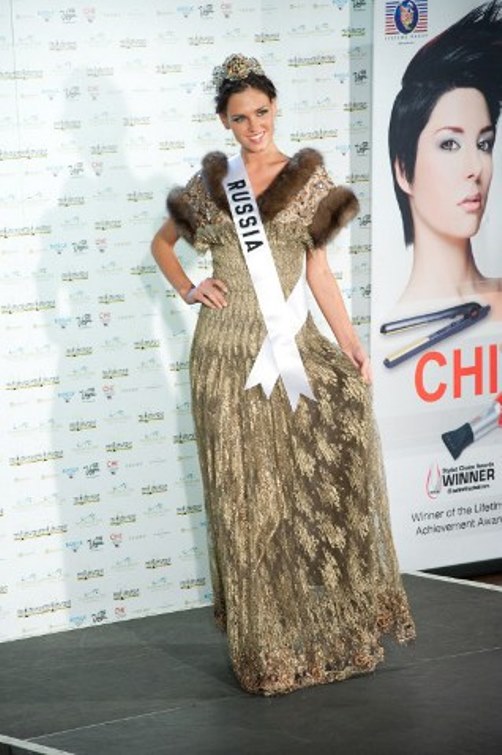 Irina Antonenko, 2010. Irina is not just a noblewoman, but the real queen. National costume cost of 60,000 dollars was created by fashion house Nata Rikami. The high price was due to the use of silver threads coated with 24-carat gold. Irina was among the 15 finalists, but she did not get the crown. 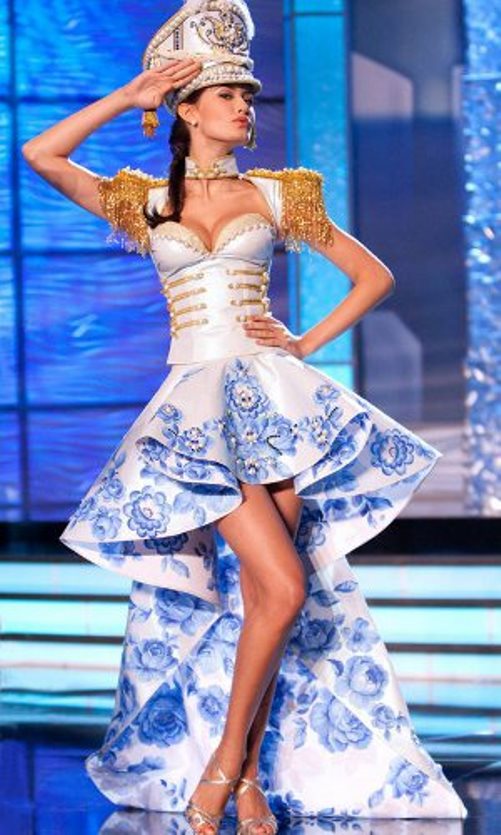 Sofia Rudyeva, 2009. Every year the national costume becomes more intricate, and the head of the Russian beauties demonstrated the military theme corset dress with gold epaulettes on the shoulders. The dress itself was made in Gzhel theme. Costume designers were Alexander Sergienko and Alexander Arutyunov. 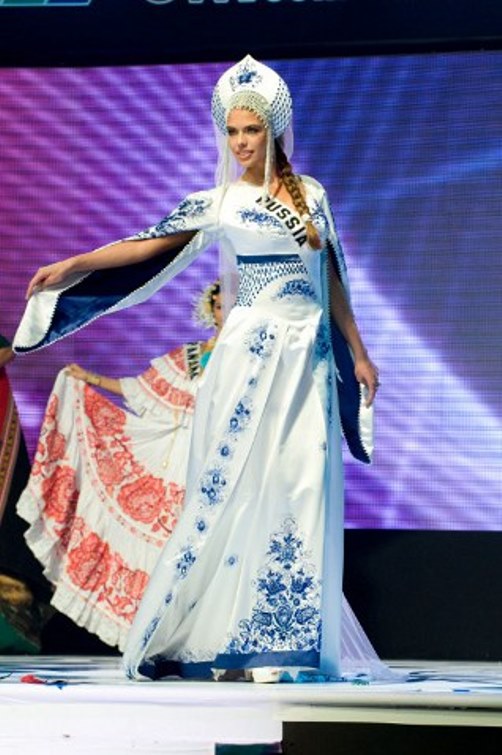 Vera Krasova, 2008. Another memorable and very elegant interpretation of Russian costume – silk dress with Gzhel ornament, decorated with freshwater pearls and sleeves bells. It may well be that the spectacular outfit influenced the jury’s decision to award Vera Krasova with the title Vice-Miss Universe 2008. 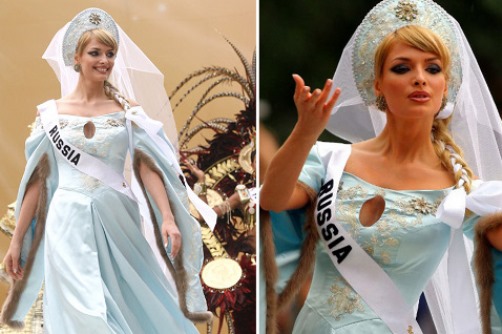 Tatyana Kotova, 2007. Swan Princess – this is the first association when looking at the Russian national costume-2007, created by designer Natalia Walewska. Tatiana was like a fairy bride in this dress: pale blue satin, veil helped the girl to become one of the favorites of the competition and the darling of the audience. Alas, the golden-haired Russian beauty has not reached the final 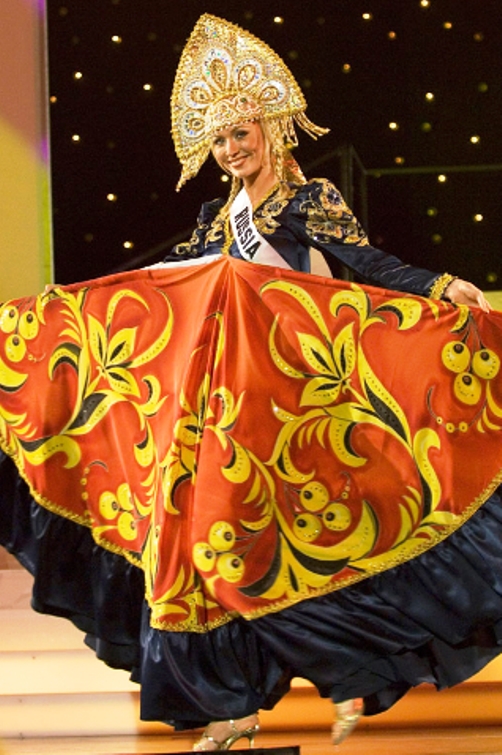 Anna Litvinova, 2006. Very bright, very feminine, very Russian – that was the dress of the Russian pretender to the title of “Miss Universe” – 2006. Designers combined Pavlov Posad patterns with Khokhloma painting, added embroidery in the form of epaulettes, gold kokoshnik. The stunning dress looked not less catchy and authentic, exotic outfits than Hispanics. Due to finish with real gold dress weighed about 6 pounds, it was designed in the hometown of Anna – Novokuznetsk, and she chose it, despite the fact that she was offered clothes by many Moscow couturiers. 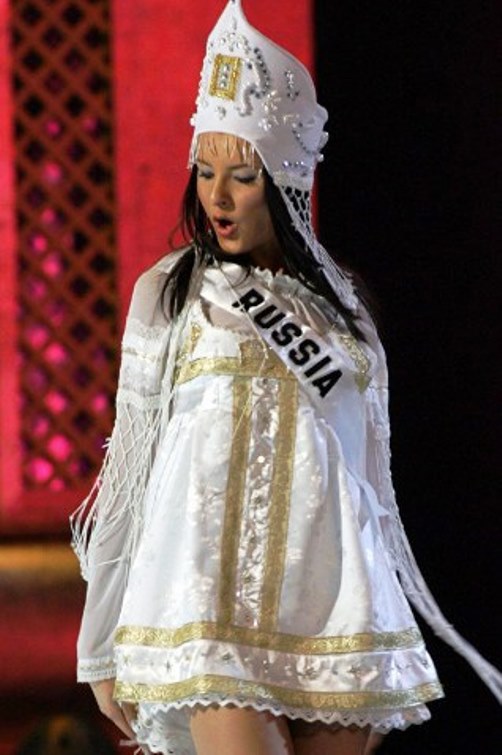 Natalia Nikolaeva, 2005. Again, snow-white image, kokoshnik – and, surprisingly, white stockings. Unfortunately, the judges did not appreciate “the modernized” Russian costume, and our hope was not included in the top ten finalists. The outfit was not created by famous designers – a poor student Natasha borrowed it from modeling agency in her native city of Rostov. 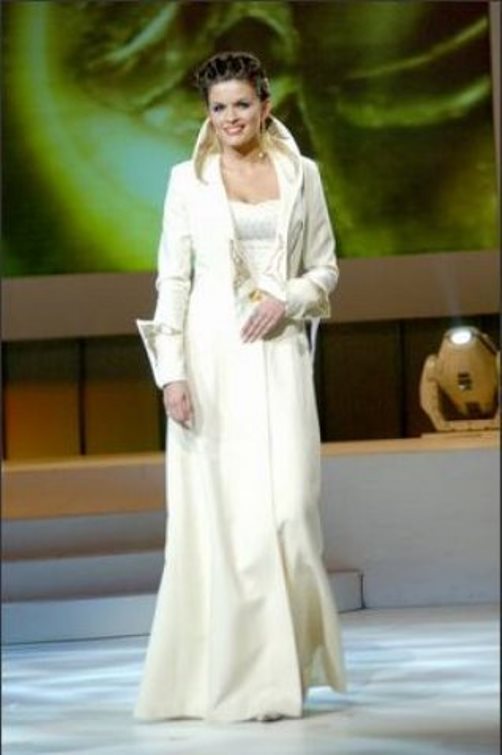 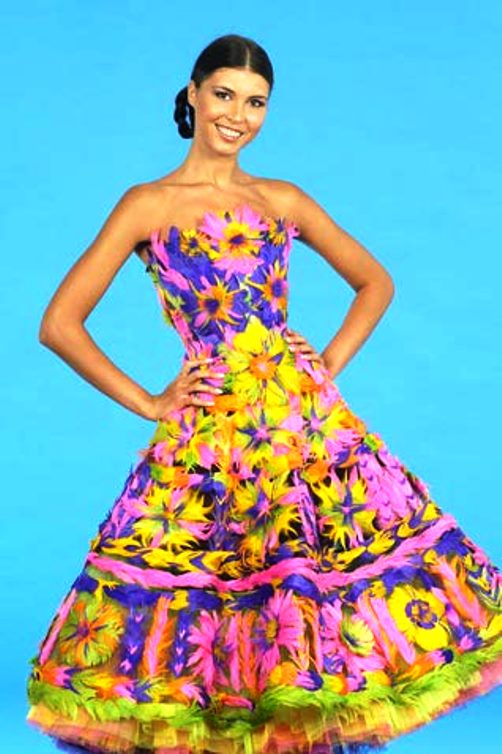 Olesya Bondarenko, 2003. National costume for the pageant was created by Valentin Yudashkin. Sundresses and Khokhloma did not inspire the maestro, so the dress was an improvisation on Russian folk theme, far from the source. Designer decorated the dress with colorful feathers. 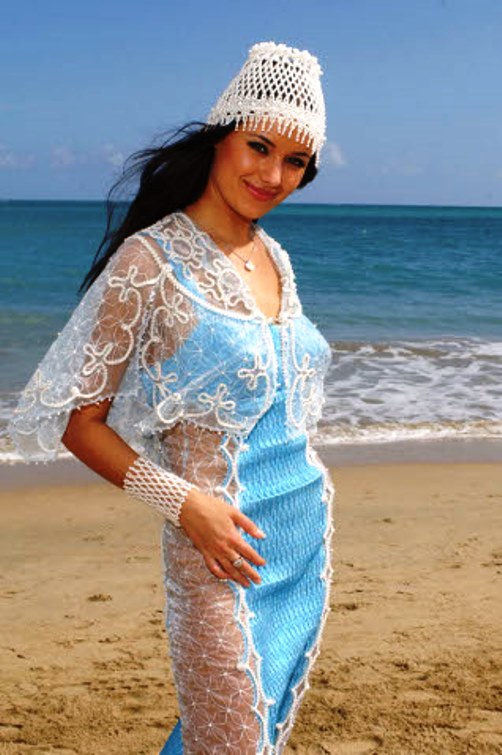 Gorgeous Oxana Fedorova, Miss Russia 2002, poses in her national costume on May 12, 2002 at the Inter-Continental Resort and Casino in San Juan, Puerto Rico

Oxana Fedorova, 2002. It is hard to imagine a national dress, more suitable for blue-eyed brunette, who became the first having received the title “Miss Universe”. Russian dress was the creation of the St. Petersburg designer Galina Eberling. 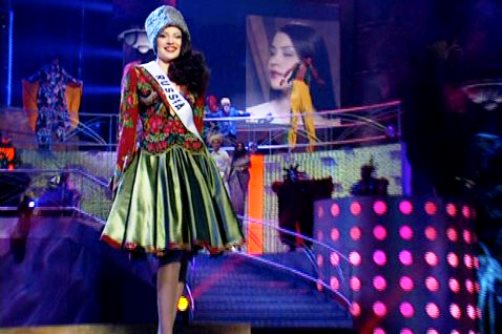 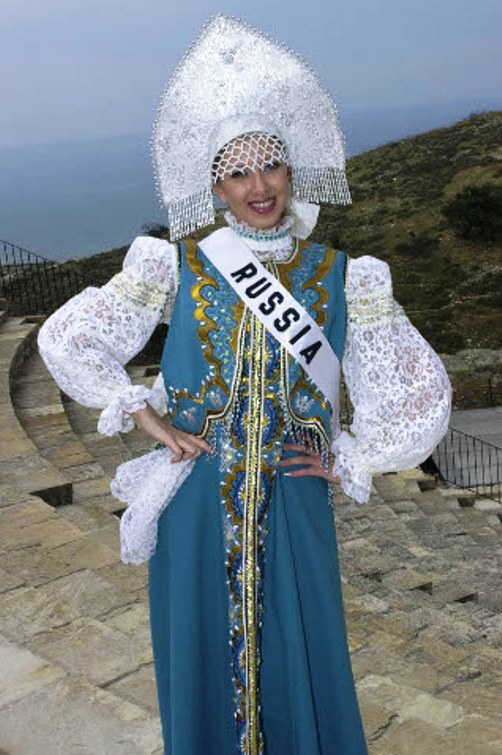 Svetlana Goreva, 2000. The image of Russian beauties of the new millennium has turned back the traditional, very airy, with lots of lace, a sky-blue silk, sophisticated decor. And, of course, kokoshnik. 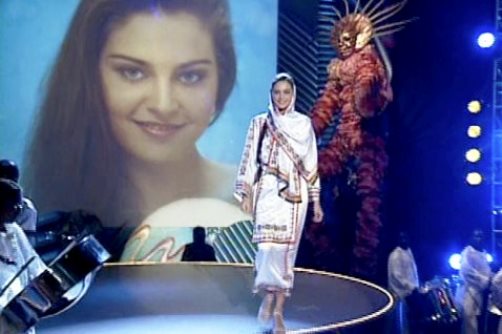 Alexandra Petrova, 1999. A little peasant style for a change, a humble scarf over her hair, feminine embroidery and bright white – in this interpretation of the Russian national costume the beautiful brunette looked unusual. 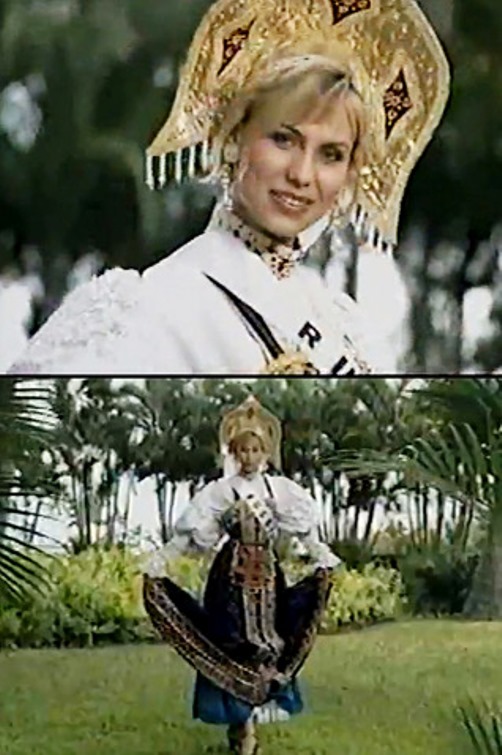 Anna Malova, 1998. Another variation on the theme of Russian folk classics: snow-white blouse with puffy sleeves and a very dark blue velvet dress with gold embroidery. 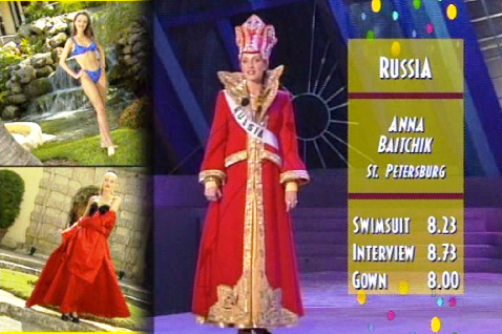 Anna Baychik, 1997. Dress cloak of red velvet, rich gold embroidery and the royal headdress – sorry that the image boyarynya not bring victory of the Russian contestant in “Miss Universe” in 1997. 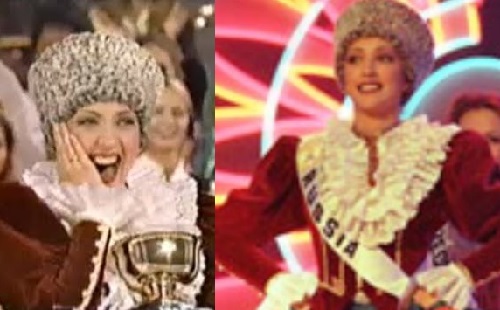 Ilmira Shamsutdinova, 1996. Unusual outfit created with a slight hint of a hussar style, coquettish hat of astrakhan – fanciful and playful reading of Russian Costume has brought good luck to the representative of Russia at the competition. Ilmira became the “Vice-Miss Universe” – 1996 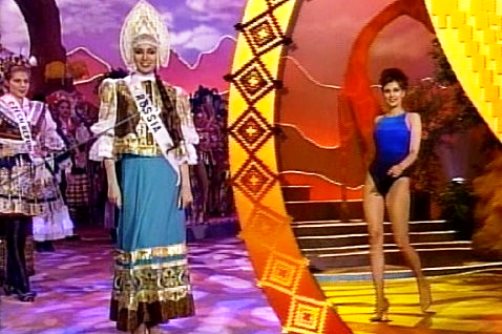 Julia Alexeeva, 1995. Kokoshnik, an abundance of gold embroidery, the fabric colors of the sky, the earth and clouds – outfit of candidate for the title of “Miss Universe” – 1995. 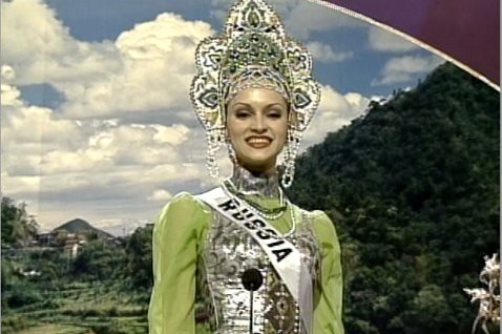 Inna Zobova, 1994. For the first time Russia took part in the contest “Miss Universe” in 1994. To conquer the unexplored beauty-tops tried “Miss Russia” -1994 Ina Zobova. National costume was traditional: kokoshnik, sundress with a shirt, and accessories – beads in several rows. But the luxurious materials – silk, brocade and pearls – did not prove Irina to be a simple village girl, as it was highlighted in the status of a Russian beauty. Alas, Zobova didn’t enter the top ten finalists.