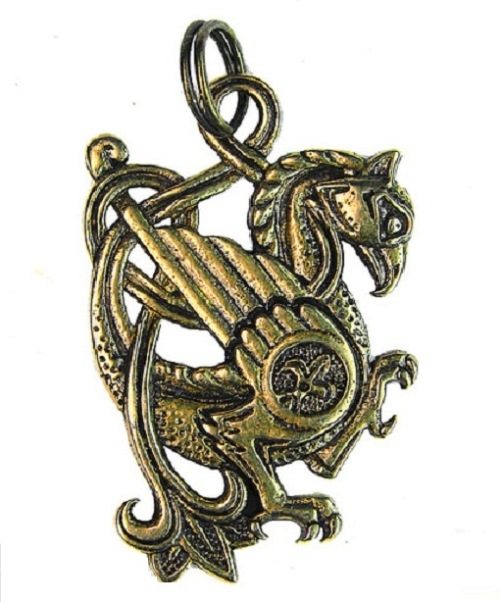 Mythological jewelry by ISTA
Mythology and history of Slavic culture is the main theme of Goldsmith’s workshop “ISTA”, which is in st.Petersburg, Russia. The jewelry masters make bronze, silver, gold replicas of the archaeological finds, original ancient jewelry, the originals are exposed in museums. Griffin (or Gryphon) is a mythical creature. The lion-torso, Eagle head with beak and strange wings on two joints. In the Greek and Slavic mythology griffin has incredible speed, strength and survival skills. Griffins guard the entrance to the Irij paradise garden – deposit of Erie golden apples that give the eater eternal youth and power over the universe. Represents the Sun, strength, wealth, vigilance, retribution. 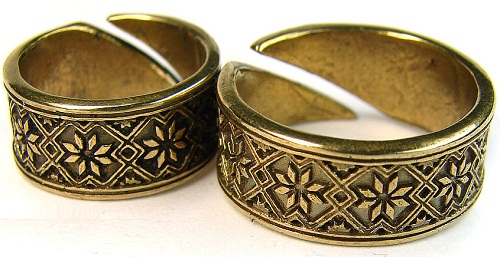 The ring of Scandinavian Sun “Succinite”

Scandinavian Sun “Succinite” is one of the most common Solar symbols in Russia and the Nordic countries. Alatyr reliably protects humans from diseases and provide well-being. Often used in rituals of healing and preservation of the family hearth. Perfect for a man and a woman. Clears and fills with the solar power (life force) or Lunar (understanding magic). Even helps man find his half and true love. 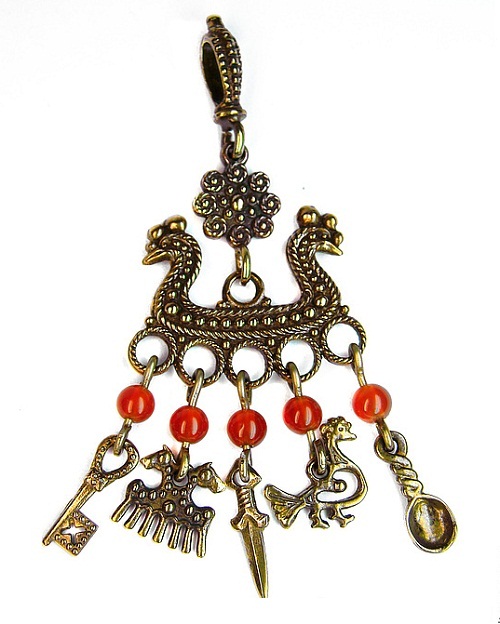 Birds protect family happiness and well-being. The key is the symbol of dignity of a full-fledged mistress. Seven-rayed green (comb) symbolizes home magic and divination. Spoon is a symbol of wealth and prosperity of the family. Knife – gave protection against external threats. 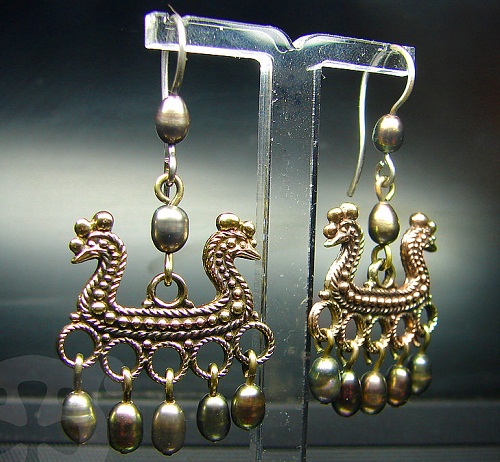 Earrings based on archaeological finds, found in the Novgorod oblast of Russia

Earrings found in the Novgorod oblast of Russia, settlement of Slavs and Finno-Ugric peoples. According to a legend, this was amazing people able to conjure. They lived in holes dug in the forest among the trees. They were hidden under the Earth untold treasures. It is believed that they almost didn’t work – House and food were given by nature itself. There were masters of all trades – and they were given skills for crafts, silver, gold, bronze, iron. Rustling earrings, brooches and pendants are widespread among the Finno-Ugric peoples, it is believed that they would drive away evil force. The bird has a sacral meaning. The Duck took out the earth from the Ocean, and that was where the first land began, according to legends about the creation of the world.

Paw of a Wolf. Mythological jewelry by ISTA

Wolf’s paw symbolizes the power of the beast. loving Wolf can work perfectly as a team. Clever and cunning, Hardy and agile, he seldom remains without award. The person who wears it, self-confident and deliberately seeks to achieve his goals. 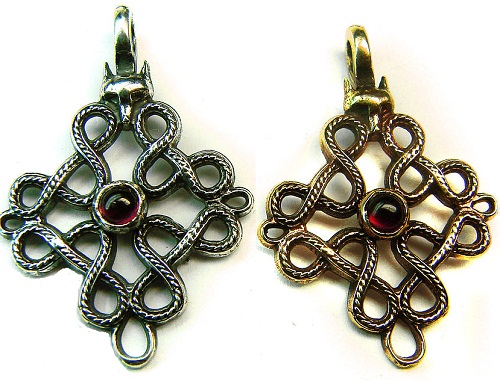 Earrings “sowed field – diamond shape”. The main element of earrings is based on archaeological finds of ancient Russia. It is considered a symbol of wealth, fertility, family welfare and maternity. 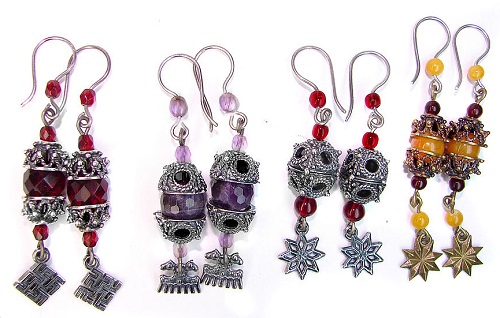 Earrings odintsy (means “one”). Odintsy is a traditional form of Russian earrings from the 10th century. The name given to the form odinets earrings with single hanging stones and beads. There were also doubles and triads. There are different versions of assemblies with different stones.

Lunnitsa (from the word moon, luna) with bird’s heads and a cross. Double-Sided replica of the 11-13th archeological finds. This ancient lunnitsa has the strongest protective properties. Duly incorporated in it the power of several ancient symbols – the Moon, the Sun, the bird-Keepers and the world tree. All these characters are the most powerful protection of health, beauty and longevity, bringing into the House peace, harmony and well-being. 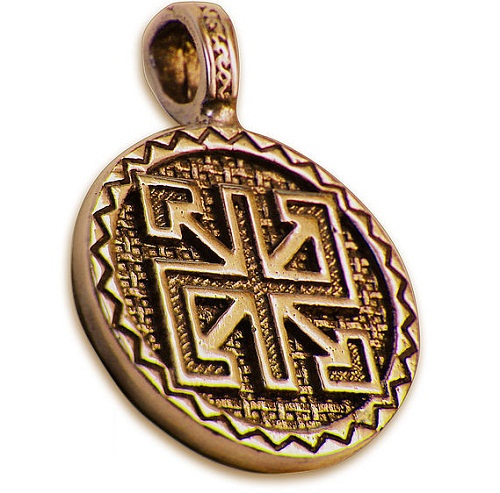 Slavic amulet Radinets (from the word “joy”) for children from birth to 12 years old. Radinets gives small children the joy and peace, as well as protects them from the evil eye and spoilage and disease.

Earring for men “Radogost” – deity of martial glory, Western Slavs. Radogost, had on the breast shield on which was depicted a black bull’s head, had sekira (kind of knife) in his hand, and on the head – the sacred bird with outstretched wings. Radogost helps develop military skills, the patron of warriors.

Better known as the Egyptian Ankh cross, symbol of life. The snake – the most sacred and revered animal in Egypt. Ankh represents Snakes in the World Tree. In ancient Egypt, all the gods were depicted with this symbol in the right hand; the possession of them depended on the life of any creature as divine and mortal. Gods gave this symbol to Kings and souls, justified in the courtroom — and one who had gained it, lived for “one hundred thousand million years.” 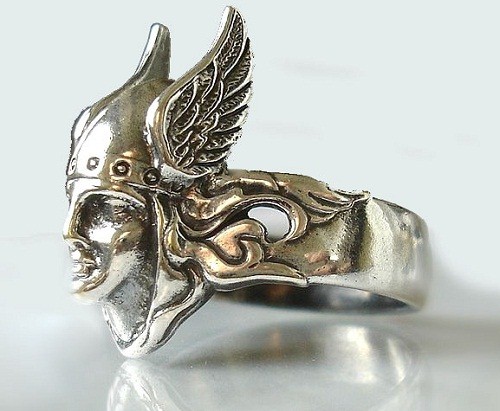 Valkyrie in Norse mythology is the daughter of a glorious Warrior or a King, whose winged horse flies over the field of battle and chooses the warriors. The dead are sent to the heavenly bridal chamber — Valhalla. From the brilliance of the Virgin-Warrior armor, according to popular belief, there is Northern lights in the sky. The Mission of the Valkyries — accompany dead heroes to Valhalla. Sometimes it is given the right to decide the outcome of the battle, and sometimes they only carry out orders of Odin. In the myths Valkyries are Odin’s daughters. 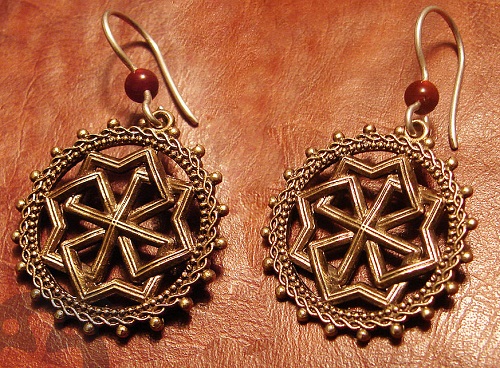 Molvinec (molvinets) allows you to own the word. Gives a bright, clear, reasoned voice. Molvinec (in English means ability to speak) gives a man the power of words, the oratory, the ability to persuade. Cures from ailments speech (stuttering, tongues, etc.). Helps assimilate new information helps you in your studies. Gives protection from abusive, malicious, hex words, slander, vilification, curses and spells the word spoken. 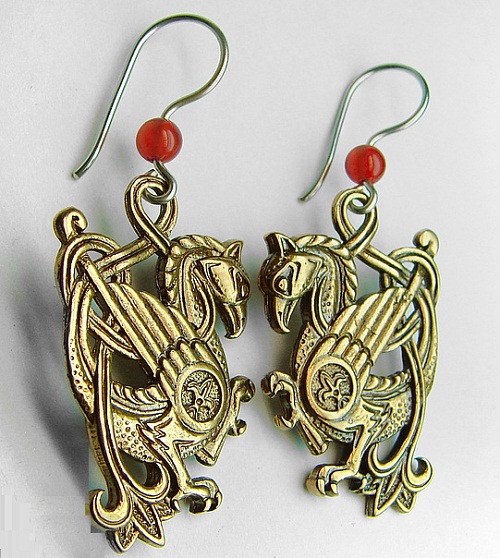 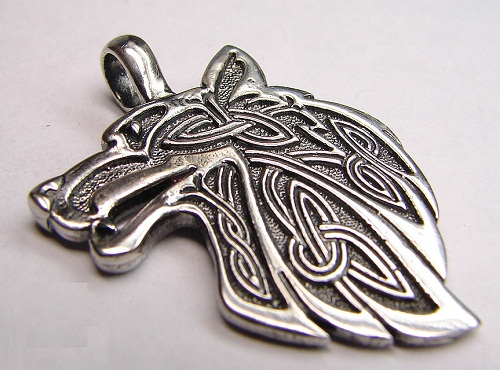 Jewelry for men, the predator represents independence and strength 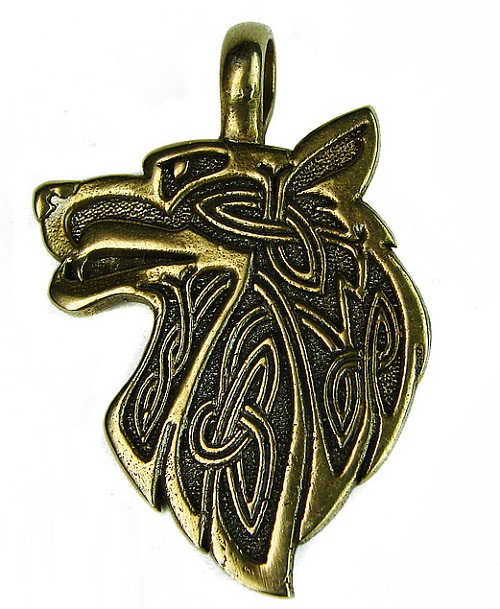 The predator represents independence and strength