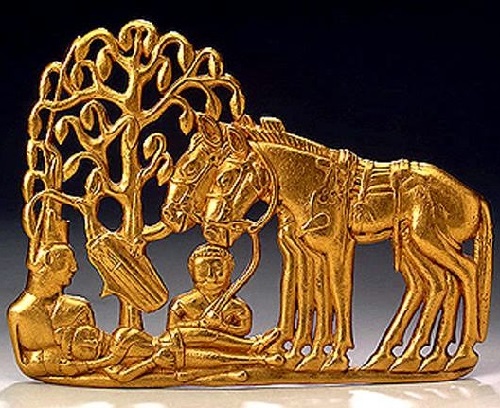 Ancient Siberian jewelry
Undoubtedly, ancient Culture is incomprehensible and attractive. Secrets of ancient arts and culture continue to be of great interest, surprise and delight for our contemporaries. Works of art and material culture reflect the spiritual culture of the people, who didn’t have written language, but managed to bring their world, the understanding of the world in the “animal style” art, which affected the living world around them and the nature of the animal “kingdom” in the dynamics of combat, hunting, battles. The first information about the excavations of burial mounds (“bumps”) in Siberia appeared in 1669: “Around the Iset and in circumference thereof Russian Tatar people dig gold and silver objects and utensils out of the graves or cemeteries.” 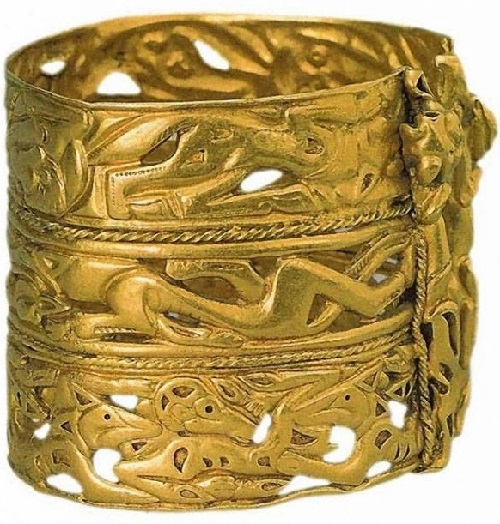 From the correspondence between Dutchman Witz with mayor of Deventer Kuper on November 4, 1705, we learn that the excavations of burial mounds in Western Siberia in the XVII century were carried out on the left bank of the Irtysh. In Western Siberia, near Tobolsk, Tyumen, Verkhoturye, and in other areas of the steppe had been accidentally uncovered mounds containing the remains of the dead, idols, antique utensils, metal cups, silver and copper bracelets, ear chains.

In 1720, Belle, traveling to Siberia, said that “a lot of people walking every summer from Tomsk and other places to the valley for 9-10 days of travel to the graves, excavating them and find a lot of gold, silver, bronze and precious stones, swords and weapons, hats saddles and bridles”.

In 1721, Tsar Peter the Great decided to put an end to uncontrolled excavations and issued a decree ordering all the treasures of mounds, interesting and unusual finds to be immediately handed over to the authorities. The governor of Siberia, Prince MP Gagarin soon sent to St. Petersburg many unique antique gold artifacts found in the mounds of Siberian diggers. Treasures of Siberia “bumps” formed the basis of the first and the world’s only collection of ancient gold jewelry of Siberia.

To collect all kinds of collections and antiquities he sent to Siberia D.G. Messerschmidt. In his diary, Messerschmidt mentions that in the first digging up gold and silver in the “hills” were engaged Russians, who lived on the Ishim. Moving in their search farther and farther to the east, Russian diggers had reached the upper lands of the Ob. They earned a lot of money mainly by excavations in the steppes. For the collection of Peter the Great Miller bought especially valuable finds from burial mounds at the farm “Bugrovschikov”, the gang of diggers of 200-300 people.

Siberian Collection of Peter I – a unique collection of art objects from the Siberian burial mounds, the era of the early Scythian and Sarmatian nomads who inhabited the territory of Siberia and Central and Middle Asia, showing clear examples of animal style images. Art of the Scythian – Siberian animal style was influenced by neighboring peoples and has much in common with the gold objects found in Scythian burial mounds of the northern Black Sea coast.

The collection gathered 250 extremely bright and expressive gold and silver jewelry from Scythian burial mounds in Siberia, 14 pairs of gold belt plates of weapons, ornaments and utensils. The collection includes objects of different materials, from different sites, created at different times – from the VII century BC to I century BC. Siberian collection was gathered by personal order of Peter I, and originally it was in the Summer Palace. After the death of Peter the Great and Catherine I, in 1727, the collection got into the Cabinet of Curiosities – the first Russian museum.

In 1859, by order of Alexander II Siberian collection was transferred to the Imperial Hermitage. Now most of the collection is on display at the Gallery of Jewels number 2 of the State Hermitage Museum.

Siberian Collection is extremely valuable because it particularly contains almost all types of openwork belt plates hryvnia and bracelets, all styles of decoration options, and iconographic schemes, as well as samples of all the techniques known to masters from the VII century BC to I century BC. Jewelry from the Siberian collection enable us to trace the development of “animal style” and technological methods for more than 800 years. 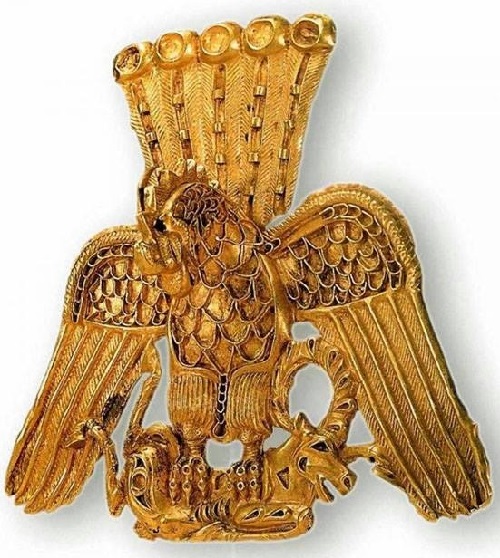 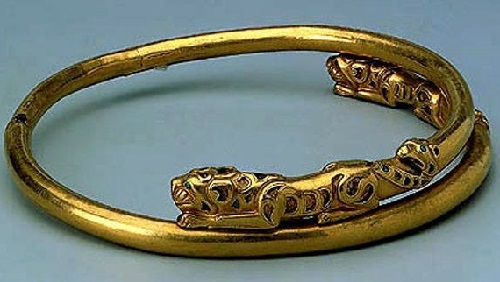 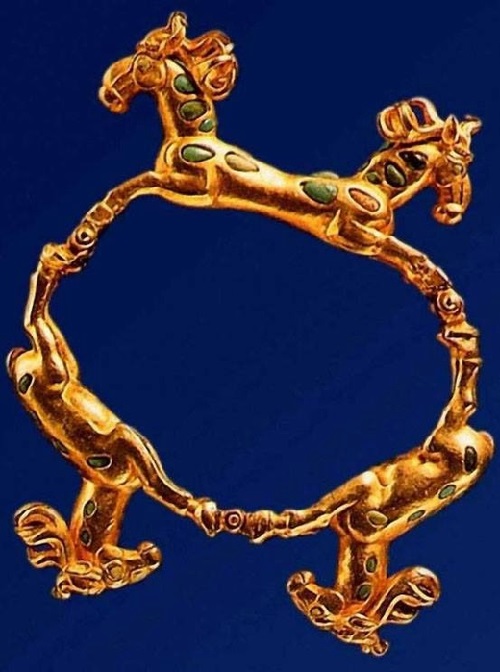 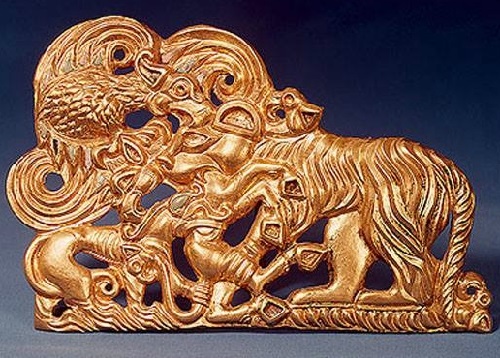 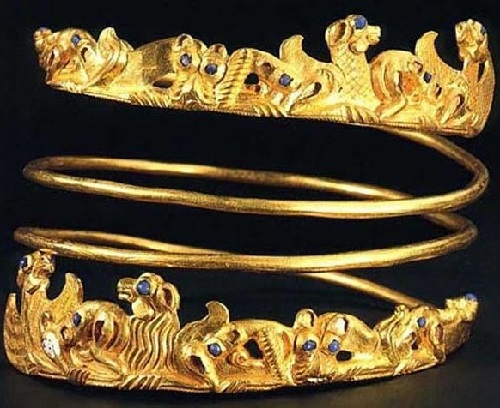 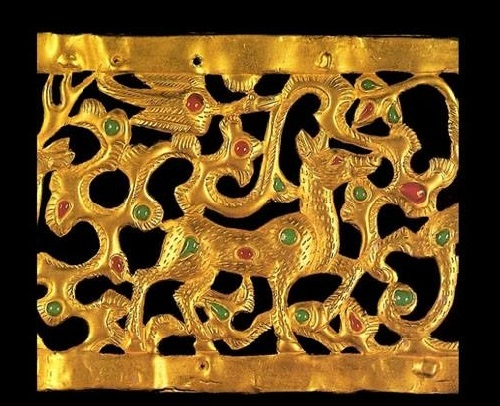 A pair of belt plates ‘Dragons in front of the tree of life’. Saka culture, 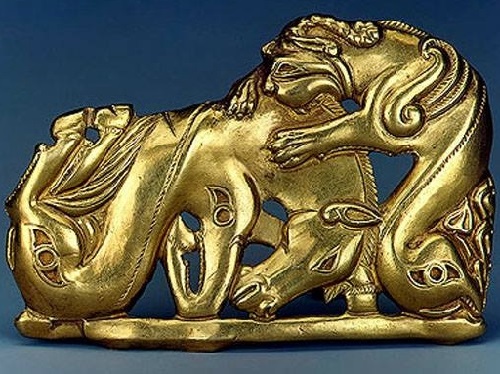 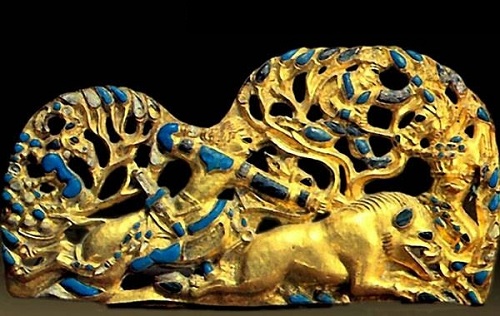 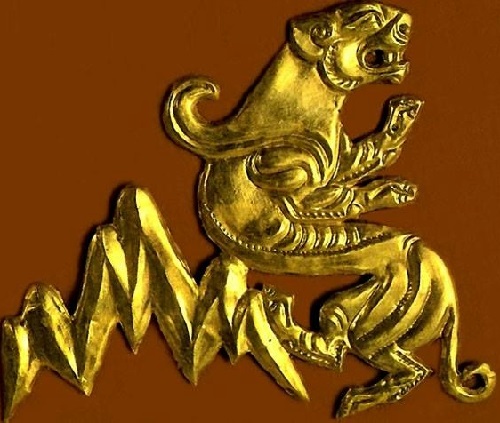 leopard on the mountain, gold badge 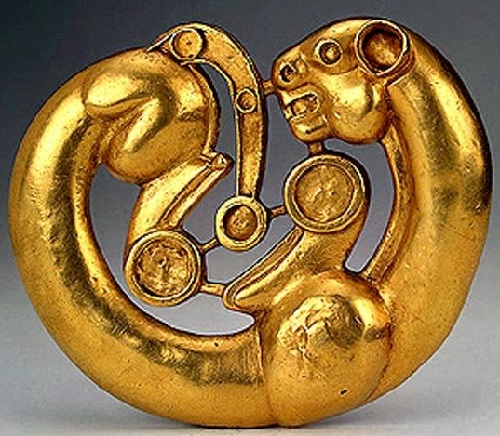 Pectoral in the form of a coiled panther. Saka culture, VI-V centuries BC