Spanish-French actress Maria Casares
In the film of Jean Cocteau “Orpheus” Casares played Death, initially appearing in the guise of a mysterious, businesslike stranger in a black radio-fuzzy limousine (fiction for those days!). She is able to enter the depth of the mirror, leading the dead, and is able to return life, and gently, sacrificially love. Maria Casares plays Death, sent to Orpheus in the guise of a mysterious Princess.
According to the symbolist-poetic concept of Cocteau, Death was at the same time the embodiment of higher Love, and Maria Casares finally got the role she deserved. The searing blackness of her hair and clothes, the tragic Spanish temperament, the hypnotic gaze of the light eyes, suddenly replaced by black ones (painted by Cocteau on the eyelids of the actress) – this image is unforgettable.
Casares not only became a visual symbol of the style of this film, but also gave it her divine voice.
“… Maria Casares speaks, screams, her voice trembles, she trembles, falling into a state of trance, which already made the audience tremble … . Tears flow down her cheeks, she is sobbing. Jean Cocteau goes off shaken … “What an actress!” – he whispers.”
The episode refers to 1949 – the poet films the final scene of his “Orpheus” in the ruins of an old officer’s school, destroyed by German bombers.

Remembering the impression made by the image of Death performed by Maria Casares, critics compared her play with the poetry of Federico García Lorca. The comparison is not accidental. It’s not just that the low, strange timbre of her voice, rhythms and plastic movements remind of the fierce passion of the poems of the great Spaniard. The image that the actress created is multidimensional. In it, the folklore traditions of the Spanish theater, and the belief in a miracle peculiar to its people, into the reality of myth. 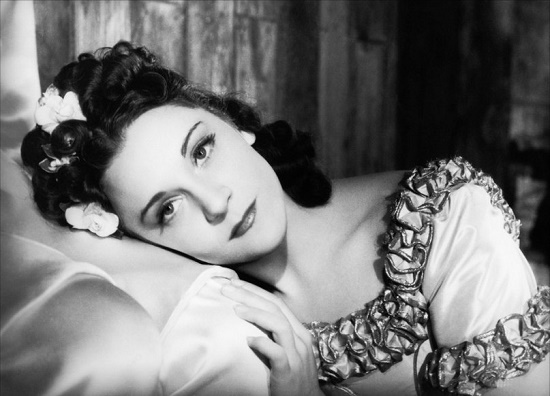 Maria Casares was born on November 22, 1922 in La Coruna, a port city on the Atlantic coast. During the Civil War in Spain, her father, Santiago Casares Quiroga, held a ministerial post in the government of the Republic. The entry into Madrid of the Franco troops compelled him to flee with his family to Paris. Here the future actress met the Second World War, and survived the fascist invasion.

To see her homeland, she happened only many years later, when in Spain, with the death of General Franco, the political regime changed. In 1976, the “great Spaniard”, as Casares now called, appeared on the stage of the Reina Victoria Theater in Rafael Alberti’s play The Black Scarecrow. Her arrival to her homeland and the appearance in the play of an emigre poet, whose work was until recently banned, perceived in the democratic circles of today’s Spain as an important and hopeful event. Magazines reported that at the first performance of the play, which ended with a political demonstration, Maria Casares got a standing ovation. This great success, according to theater critics, made us recall the atmosphere of pre-war performances by Margarita Xsirgu – the famous tragic actress, the first performer of roles in the plays of Lorca and Alberti. 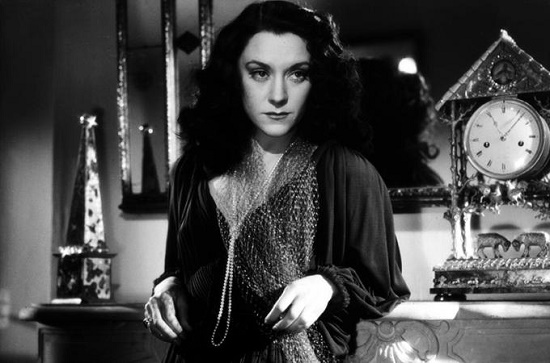 The Ladies of the Bois de Boulogne. 1945. Actress Maria Casares

In 1940, when the Nazis occupied Paris, Maria Casarez was a student of the drama department of the Paris Conservatoire. She had to finish her studies with the occupants: graduated from the Conservatory in 1942, during the most tough period of Hitler’s rule. The same year, the twenty-year-old Maria made her debut in a small theater “Mathuren” in the tragedy of the Irish playwright John M. Singh “Deirdre – the daughter of sorrows,” written before the First World War. The performance immediately showed her acting abilities. During the war she will play the main roles in the plays of Ibsen (“The Builder Solnes”), Camus (“Misunderstanding”), and Turgenev (“Provincial”) on the stage of Matyuren. But even earlier she appeared in the film of Jacques Prever and Marcel Carne “Children of Paradise” (1943-1945). 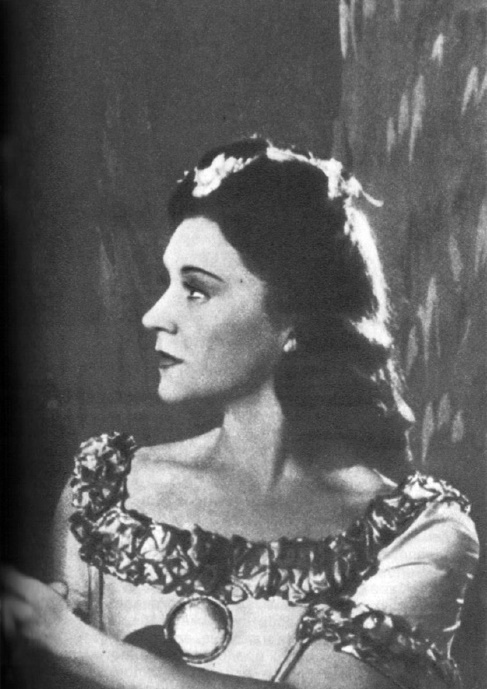 The cinematic debut of Maria Casares seemed at first as promising as her debut in the theater. True, this time the scale of success was due primarily to the circumstances of the performance. “Children of Paradise” – one of the most famous films in the world cinema. It went around all the countries of the world, twice demonstrated at international film festivals and in France had an unusually long, happy fate.

Filming “Children of Paradise” began in August 1943. By June 1944, the film was almost ready, but the director managed to keep it in production until the liberation of Paris. The premiere took place two months before the end of the war, on March 9, 1945, in a solemn, festive atmosphere.
Participation in the “Children of Paradise” was enough to make Maria Casares one of the recognized actresses of “prestigious cinema.” A few months later, when Bresson’s film “Ladies of the Bois de Boulogne” comes out, the name of the recent debutante is already widely known. Soon, she will appear in André Cayatt’s melodramas “Roger-la-Ont” and “Revenge of Roger-la-Onta” (1946). Also, in a highly publicized, sensationally controversial “La Chartreuse De Parme” (The Charterhouse of Parma) by Christian Jacques (1948).

In 1946-1950 she played several of these roles – their indispensable element was a combination of insidiousness, vindictiveness and the elements of dark passion. More interesting was the offer to play a movie one of the heroines of Stendhal in the film “The Charterhouse of Parma”.

Maria Casares was snake-elegant at balls, majestic in the scenes with the prince, businesslike, frantic, blazing with lightning in anger. She was able to express “active suffering”, the violent mental rhythm of her restless and energetic heroine, without compromising against artistic taste. 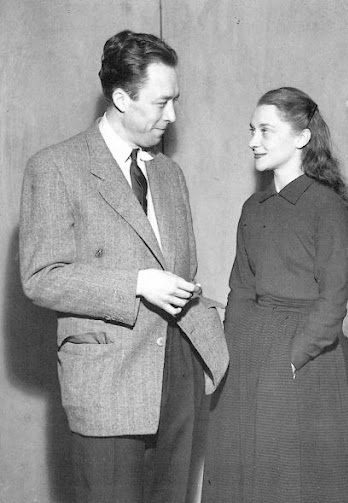 Christian-Jacques was still assembling his film when the joint performance of Gerard Filip and Maria Casares in the play “Revelations” by Henri Pichet took place in the theater “Noctambules”. Philip played Poet, Casares – his Beloved. They brought the idea of ​​this production from Rome, from the filming of The Charterhouse of Parma. Gerard, who had a difficult time meeting people, communicated between the filming only with Maria Casares, whom he had known since Theatre des mathurins. A few months spent in Rome made them real friends. In the cinema, they no longer meet. But in the theater will often play together.

Ahead are the years of their work with Jean Vilar: Avignon festivals, the Parisian performances of National Folk Theater in the huge hall of the Chailo Palace, tours around the provinces and abroad. So far, after the “Revelations”, their paths will disperse for a while. Maria Casarez will play in the company of Madeleine Reno – Jean-Louis Barro, in the theaters “Eberto”, “Madeleine”, then for two seasons will become an actress of “Comedy France”. In her repertoire of these years – Camus and Sartre, Don Giovanni Moliere, The Carriage of the Sacred Gifts by Prosper Merimee, the role of Joan of Arc in the Mystery of Charity of Joan of Arc by Charles Pegu, played with great success at the Lyon Theater Festival 1952. 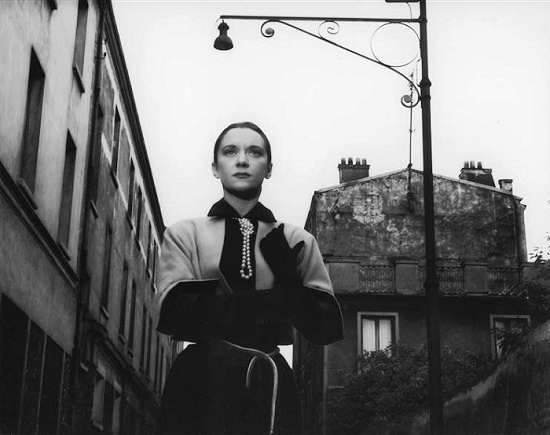 In the cinema for Casares, perhaps the most fruitful was the year 1949. In addition to “Orpheus”, where she played her best cinematographic role, came out on the screen a short film by Alain Rene “Guernica” – according to the famous work of Picasso. Maria Casare read in it behind the scenes the melodious and sorrowful poems of Paul Eluard – a poetic requiem to the two thousand dead in Guernica on a sunny day on April 26, 1937. Guernica, the ancient Basque capital, in the 20th century – a small provincial town on the slopes of the Pyrenees Mountains, was destroyed in a few hours by German bombers. All the inhabitants, among them many women and children, killed under the ruins of houses. 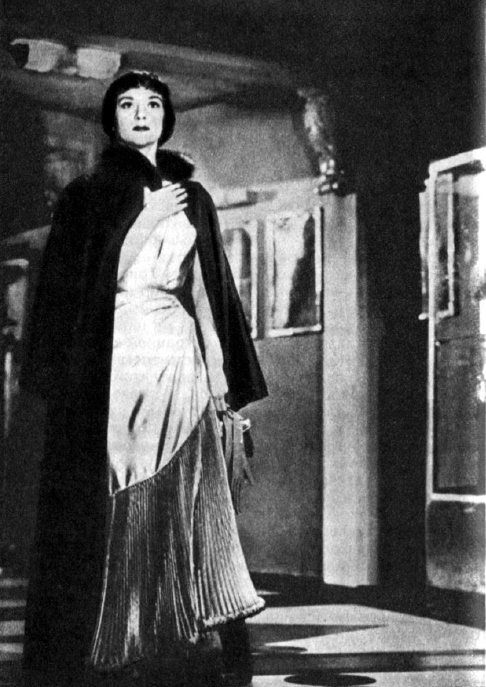 Pablo Picasso wrote his tragic canvas immediately after the Nazis’ atrocity, which shook the whole world with its senseless cruelty. Guernica was the first defenseless victim of totalitarianism, the beginning of the era of mass “unmotivated” murders. The artist expressed this exploded, horror-stricken agony of torn objects, forms, the silent cry of fantastic figures – the image of the universal nightmare.

The voice of Maria Casares – a melancholy and quiet voice of sorrow, of slow meditation, led the main theme of the film – memory and pain. This sad, quivering and measured voice, uttering the stanzas of Eluard, then retreating before the documentary phonogram of falling bombs, the barking of dry barking machine guns, then again arose from the silence that had come. Close-ups of the muzzle of an enraged bull, tilted, distorted faces, beating convulsions of an iron horse – fragments of Picasso’s canvas – were “assembled” with a voice reading verses accompanied by a piano. Recalling musical phrases, the voice of Maria Casares introduced into the violent visions of the artist the call of prophecy that had come true, and the memory that calls for hope. 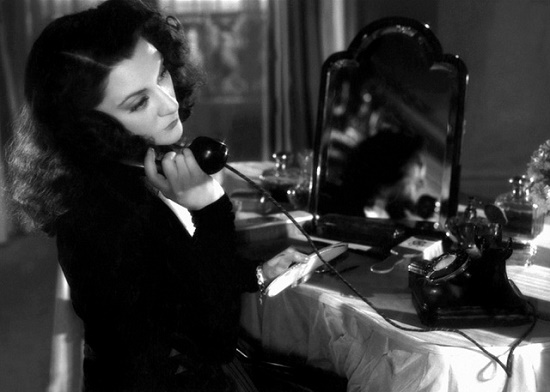 Reading poetic text in the film “Guernica” – the last significant cinematographic work of Maria Casares. In 1950, she starred in a very mediocre film “Shadow and Light,” after which there was a long break – to the “Testament of Orpheus” (1959), where the seventy-year-old Jean Cocteau, playing himself – Orpheus, meets in one of the episodes with the Princess-Death. With this lyrical touch, the screen career of one of the best theater actresses in France ended. In the films of the following years, Maria Casares did not appear. 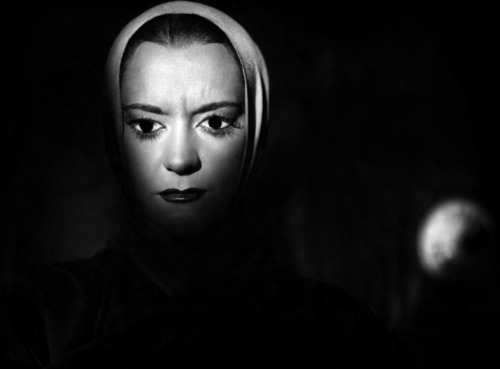 How to explain the departure of the actress from the movie?
In part, it was caused, probably, by her growing theatrical fame and directly proportional employment in the theater. Maria Casarez played her most significant roles on the National folk theater scene in the 1950. In particular, Lady Macbeth, Maria Tudor in the romantic drama of Hugo, Fedra in the tragedy of Racine, and a Spartan princess in Marivaux’s comedy “The Triumph of Love”. Together with Jean Vilar and Gerard Filip, she participated in the Avignon festivals, and went on tour. 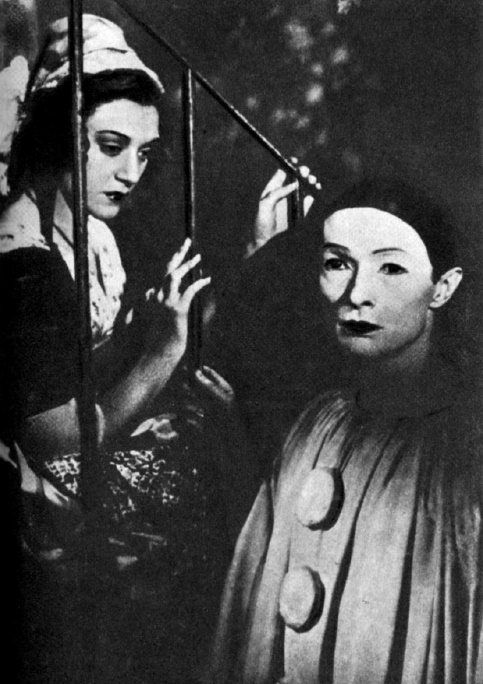 But there was another, deeper reason: the changed situation in the cinema. The end of the 40’s – the beginning of the 50’s – the time of the triumphs of Italian neo-realism, greedy audience interest in the document, the prose of the day. By 1959, when Maria Casares again meets with Cocteau on the set of “Testament of Orpheus,” a “new wave” is raging in the cinema. Dozens of new, young names, and new trends in the aesthetics of cinema push back into the past the epoch of Casares. 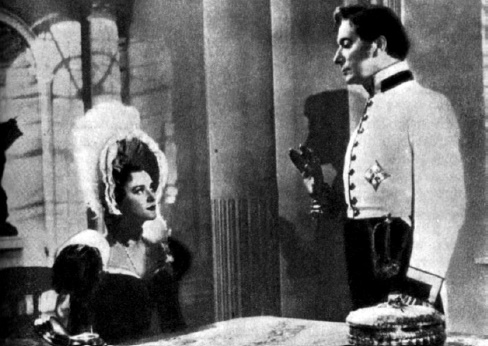 Maria Casares entered the history of French art primarily as a theatrical actress. In the cinema, she did not work long and was not a star of the first magnitude. And yet her screen life has developed happily: she worked with the greatest masters, and became known to the whole world. Since her retirement from the cinema, decades have passed, but these films continue their journey through the cinema halls.

As Caroline Bessier in ‘Shadow and Light’. 1951 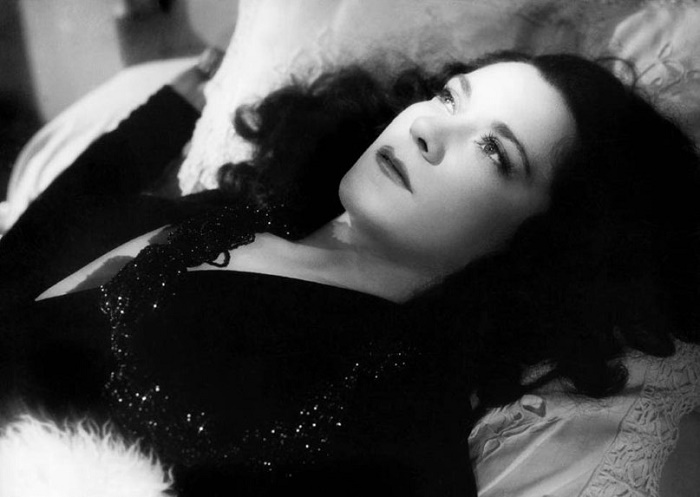 Casares as The Princess – Death 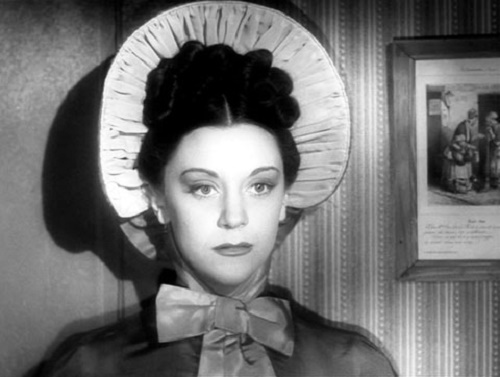 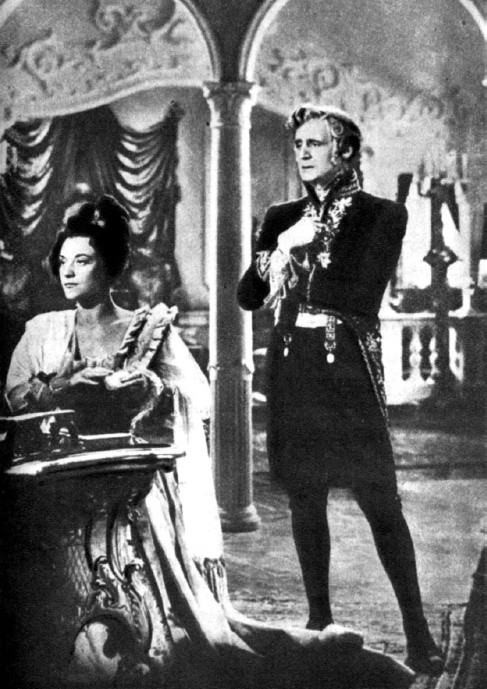 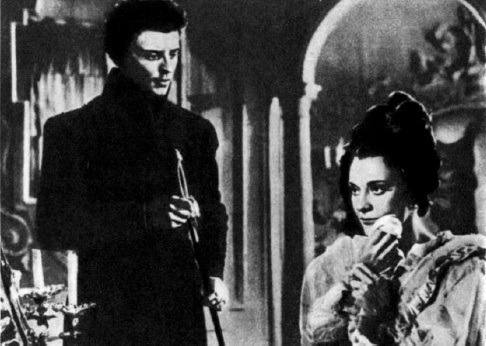