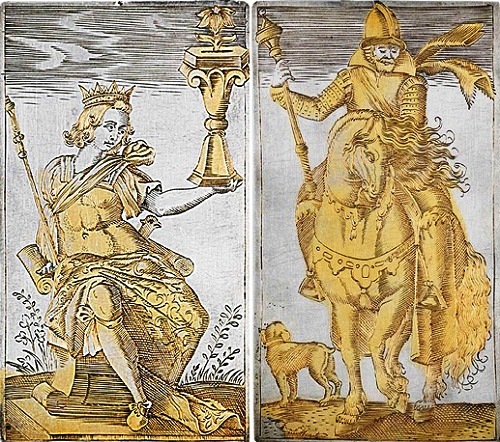 Made of silver and gold Rare set of 400-year-old playing cards at Christies. Made by Michael Frommer around 1616

Rare set of 400-year-old playing cards at Christies
An extremely rare 400-year-old set of playing cards made of silver and gold by Michael Frommer around 1616 have been discovered. The cards were created in Germany and engraved at a time when no standardized style of cards existed. Each card is about 3.4 x 2 inches and blank on the back. The cards are described as one of only five known decks of silver cards and the only complete set. The deck of ‘silver cards’ gilded with gold were first sold at auction at Christie’s for £2,421,123 in 2010. The cards were owned by Portuguese princess Infanta Carlota Joaquina, who married a prince in Portugal before fleeing to Brazil when Napoleon’s armies marched into Iberia in 1807. Stories say she took the set with her. 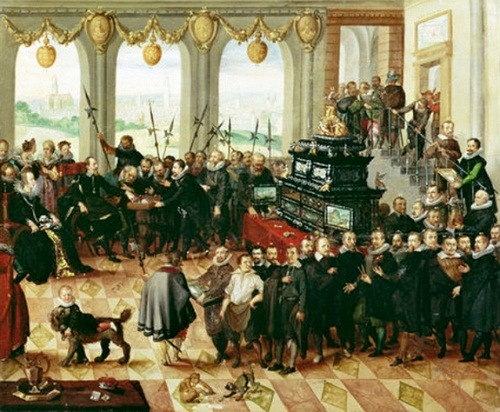 The presentation of the Pommersche Kunstkammer to Duke Philip II of Pomerania. This painting was drawn in 1617 by Anton Mozart and shows a finely crafted collector cabinet (the Kunstkammer) being given to the Duke. This particular cabinet held three sets of silver playing cards among other works of art. It’s not known who owned the newly discovered silver card set in the 17th century but it was probably displayed in a cabinet like this.

According to a family tradition, she possessed the silver playing cards in the early 19th century. When Napoleon’s armies invaded Iberia in 1807 she took them with her to Brazil
When the princess was in Brazil, Napoleon forced her brother the Spanish king Ferdinand VII to abdicate. Carlota attempted to become queen in his place and gain control of the vice royalty of Rio de la Plata (shown in blue), then controlled by Spain. She enlisted the help of Felipe Contucci who served as her liaision to leaders in Buenos Aires.

Contucci claimed in November 1808 that 124 of the territory’s leading men were ready to support her as queen of a newly independent country. However the British, as well as the surviving Portuguese and Spanish governments, opposed the plan. Ultimately Carlota’s ambition of becoming a ruling queen came to nothing. According to the family story Contucci’s wife was given the silver cards. This painting shows the princess on a equestrian horse. 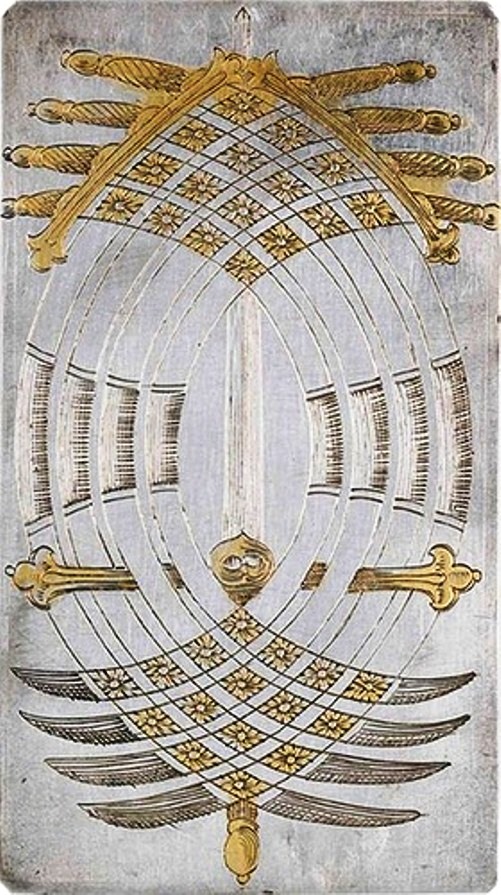 The nine of swords. The cards are divided into four suits – swords, batons, cups and coins. Each suit, in turn, has three face cards – king, knight and knave. There are no jokers 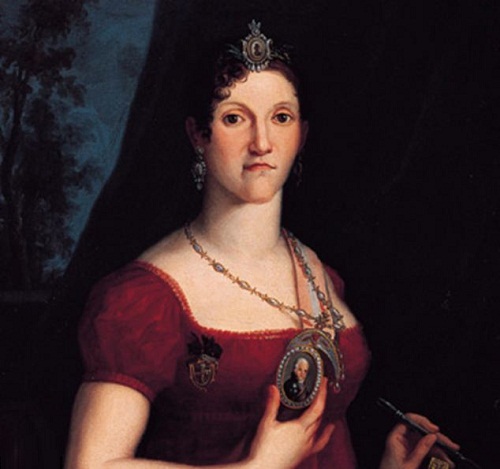 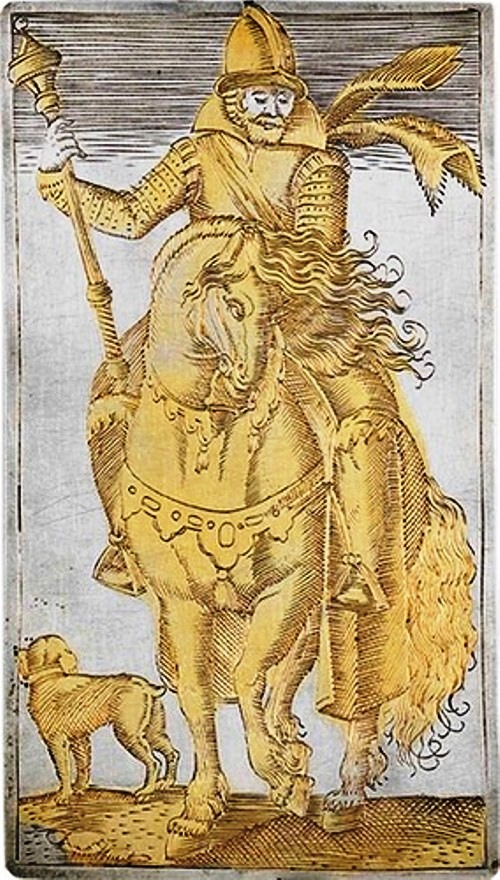 The knight (also known as cavalier) of batons. He appears to have a dog beside him. He’s dressed in early 17th-century military costume 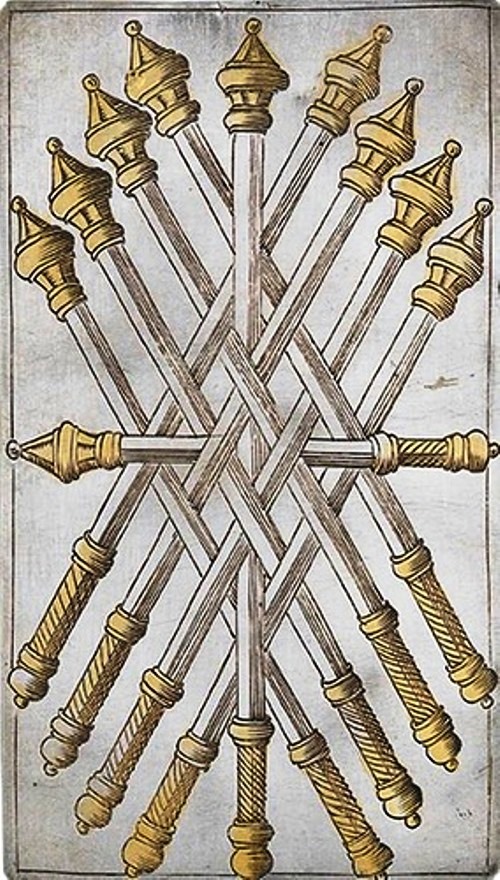 The 10 of batons. Designers of the cards used mercury to make the gold gilding bond with the silver. Mercury is a potentially lethal substance and the process was dangerous 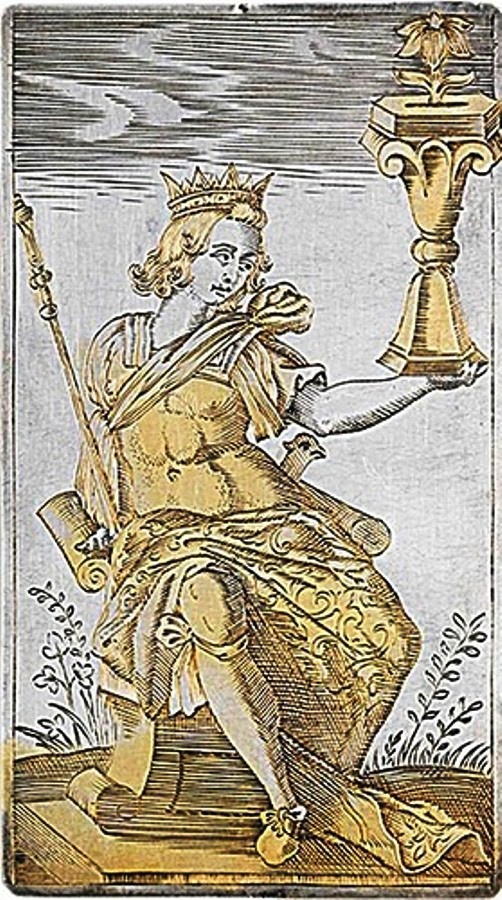 The Queen of cups 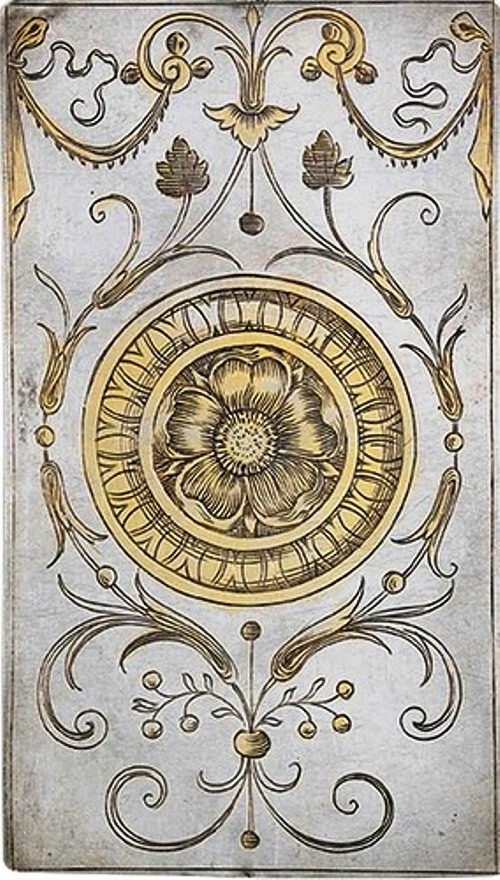 The ace of coins. All four ace cards in the set are highly stylized, this one having a flower at the center of the decoration 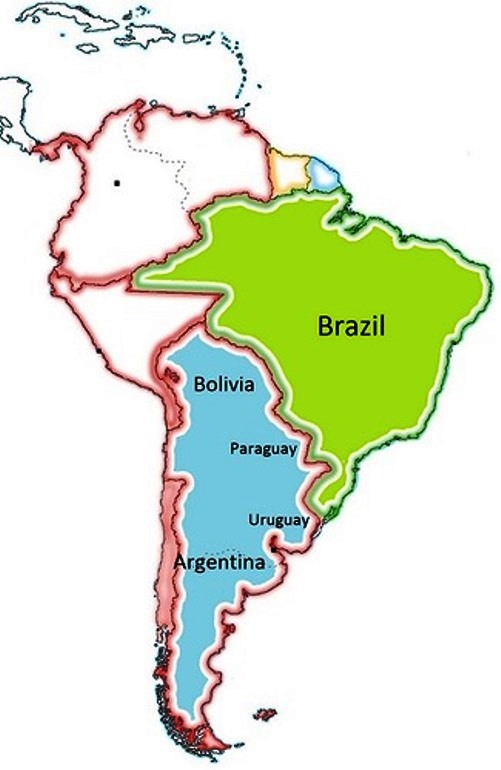 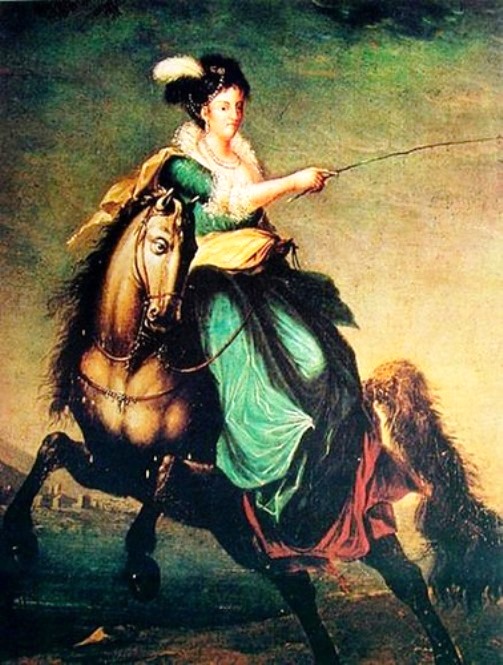 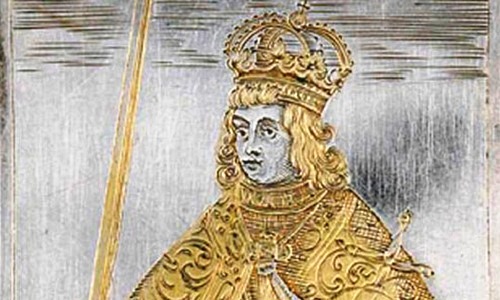 The king of cups. This ruler is dressed in ancient Roman clothing. Each face card shows different depictions of the subjects