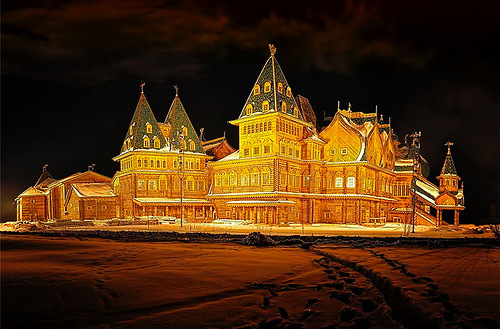 Russian Wooden Palace built without a nail
Often called the Eighth Wonder of the World, this was The Royal Residence of Tsar Alexis I in Kolomenskoye, Moscow. Noteworthy, built without using saws, nails, or hooks. Designed and built by two Russian self-taught carpenters back in 1667. However, demolished by Catherine the Great in 1767 (to make space for a much inferior palace). And completely rebuilt and restored to its former glory in 2010.
Meanwhile, the palace is full of light streaming through a multitude of wide windows. By the way, it was a sort of a novelty back in 1667, compared with narrow, fortress-like windows of most Russian royal residences of the time. 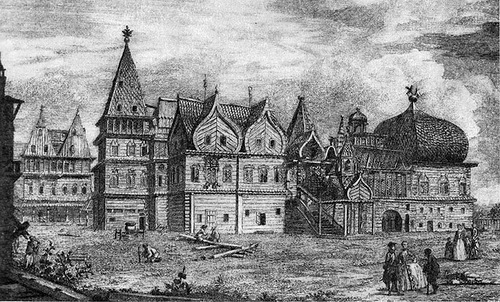 Completely restored in 2010, now it is a museum-reserve. The modern building has undergone many changes compared to its predecessor in the 17th century. For example: rebuilt in another place, deployed at 90 degrees, and built of reinforced concrete. However, outside it is covered with logs. But despite some changes, the Palace still very much admires, surprises and delights visitors who visited it.

The length of the royal residence is 100 meters, width 80 meters, and the highest towers reach a height of about 50 meters. The 270 room palace is wonderful, amazing at first sight, it’s like Teremok from Russian fairy tales. Executed in a unique Russian style, it is especially beautiful at night. Night illumination makes it impressive against the background of the night sky.

And now let us turn to the inner decoration of the royal Palace. Each centimeter of the rooms: walls, ceiling, stoves are painted with Russian traditional ornaments. And frankly, it’s hard to believe that the Tsar and his family could live and work here. It seems that all this is somehow not real, fabulous, scenery for a fairy tale. But at the same time, all these ornaments, drawings emphasize our Russian personality, dissimilarity in others, and originality. Looking at all this you understand that Russian culture is unique.

Panorama of Kolomenskoye, 18th century. Watercolor from the original drawing of Giacomo Quarenghi 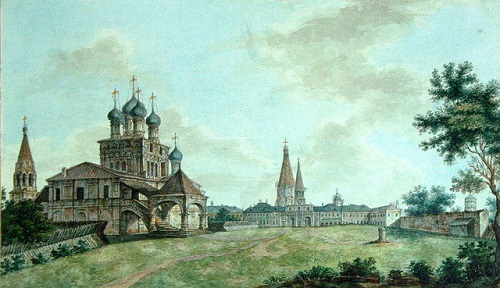 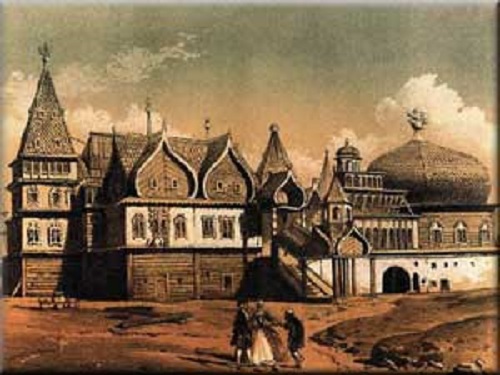 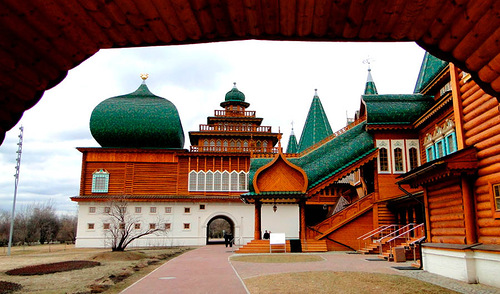 Fragment of the wooden palace 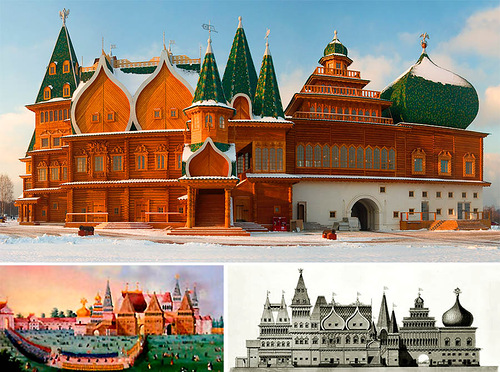 From sketch to reality 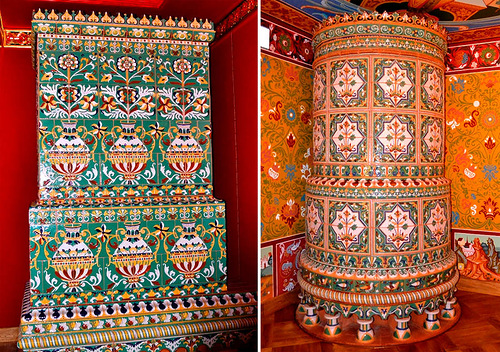 Fantastic ornamented Russian-style stoves are installed in many rooms

Opening the door to the Throne Room, you can see the surprisingly simple scarlet throne chair of Tsar Alexey Mikhailovich 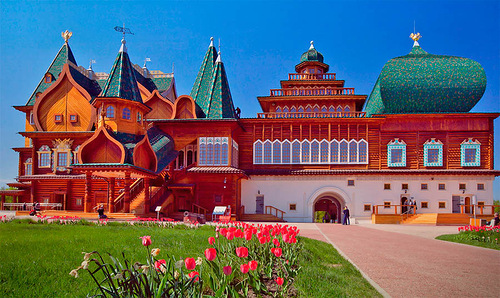 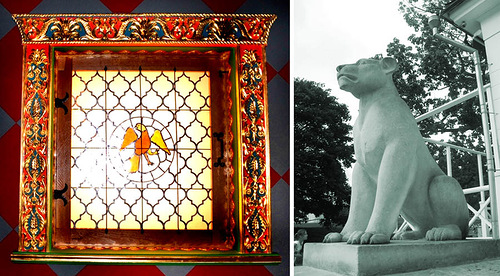 Entering the palace, you are greeted by the lion and the unicorn 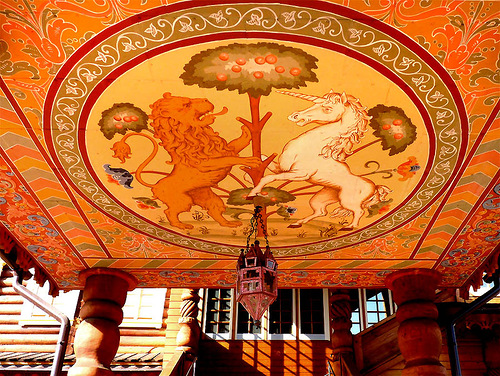 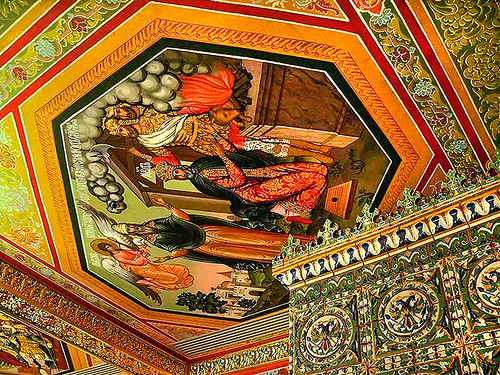 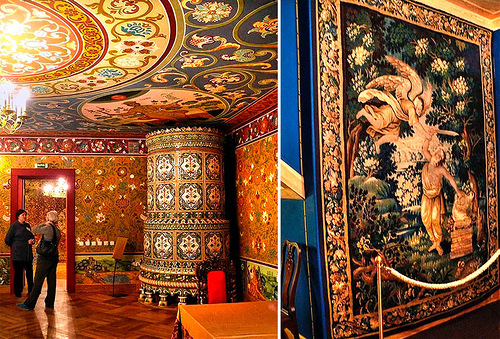 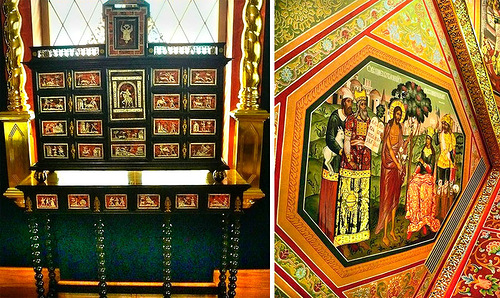 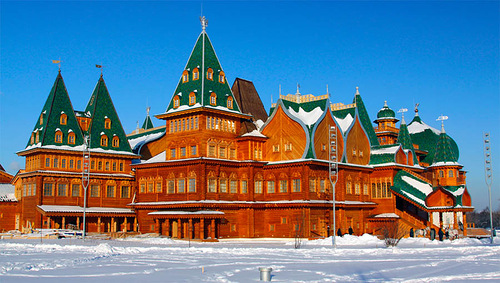 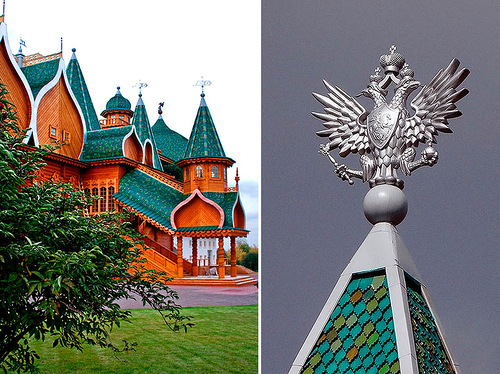