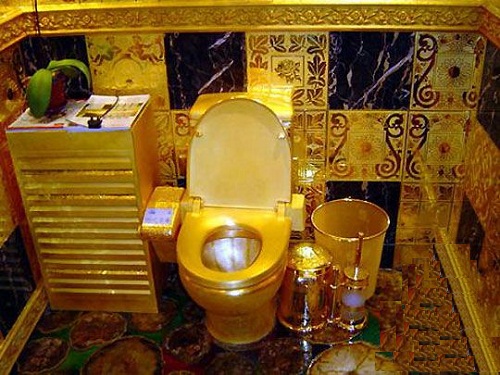 Toilet of gold Lenin dream come true
The Guinness World Records “Public toilets” made of gold, appeared in China, in the jewellery shop “Golden House” of Hong Kong. The price of each of them – 4.9 million dollars. Noteworthy, you could use them only if buying jewelry for 200 dollars. Jewelry store, according to the owner, done for the amusement of tourists from China, brought up on the postulates of Marxism-Leninism. The Shop Owner Lam Sai-Wing said – since his youth he had dreamed of having enough wealth to build toilets of gold, as Lenin in 1921 wrote. Besides, that this would be a useful reminder of the futility of the capitalist system. According to Lam, when he was a teenager, he read about a dream of Lenin of toilets from gold. He emigrated to Hong Kong, aged 22 and launched a successful jewelry business. However, it is precisely devoted to capitalism rather than what Lenin wrote. Lam Sai-Wing called the Golden toilet «a combination of my thoughts and ideals “. 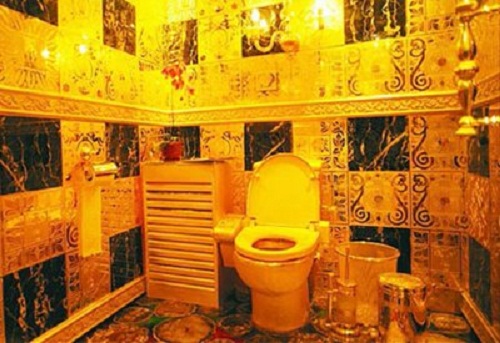 Installed in 2001 Toilet of gold

In addition to established in 2001 toilet, there are also sinks, bathroom brushes, toilet paper holders, mirrors, and chandeliers. Besides, the floor, wall tiles and the doors made of pure gold. Even before entering the toilet, the floor laid with gold bullion. According to sources, the designers used one ton of gold. Also, there are other values — the ceiling studded with precious stones in quantities of more than 6000 pieces, rubies, sapphires, emeralds and amber. 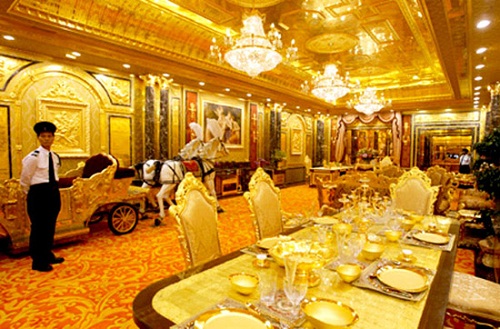 After the international economic crisis in 2008, the price of gold had gone up, and the owners decided to fuse the most gold plumbing fixtures, earning the many millions of dollars. But they seemed rushed, because the price of gold continued to rise even further. Two golden toilet seats weighing 280 kg are the highlight and maintained in working order, but to use it is prohibited. For 20 dollars is allowed to sit on a seat in the clothes; the clients have to take off their shoes, so as not to scratch the gold tiles. Wang Xifeng, from mainland China, appreciated Lenin’s vision and Lam’s realization of it. “It’s a good selling point. It’s a dream come true.” 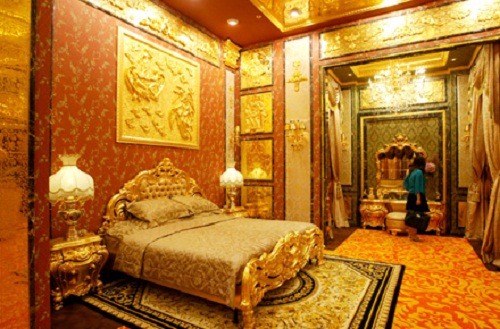 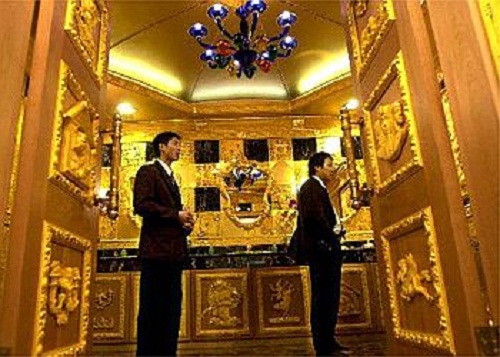 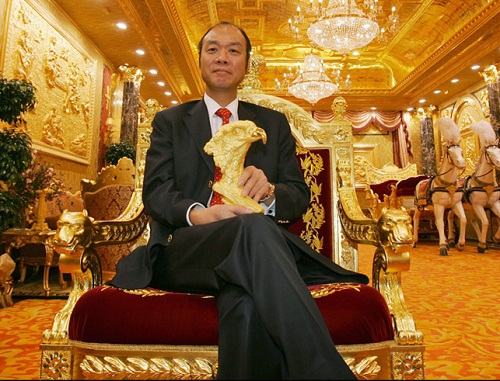 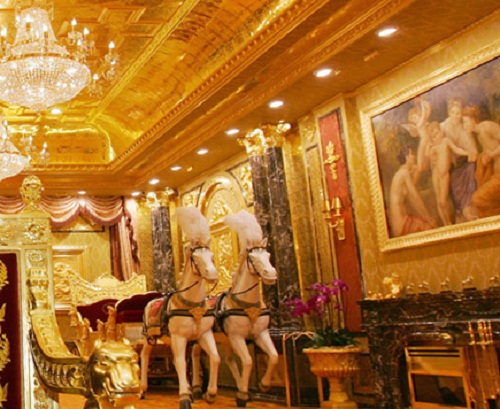 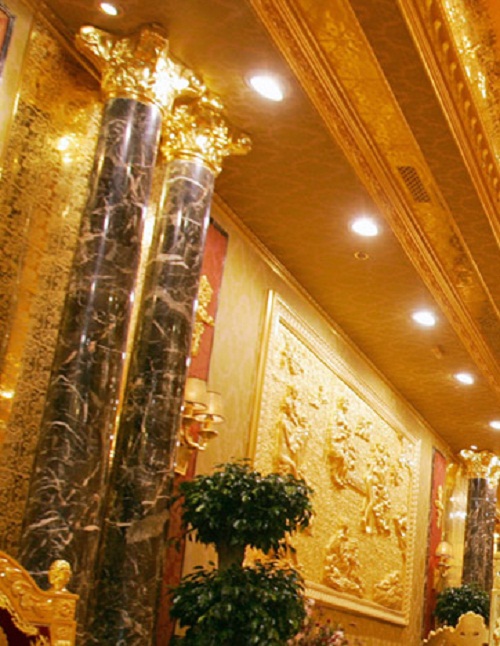 Made of gold interior of Swisshorn Gold Palace 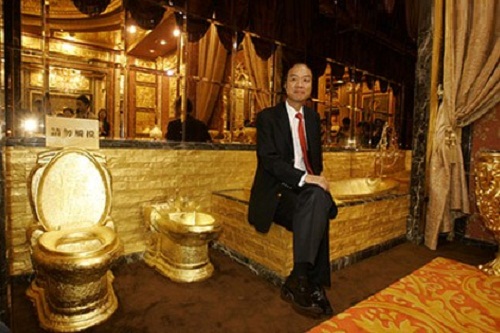 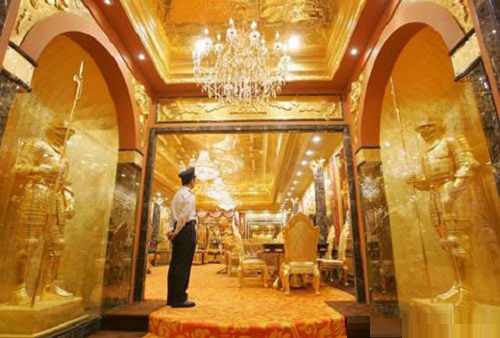 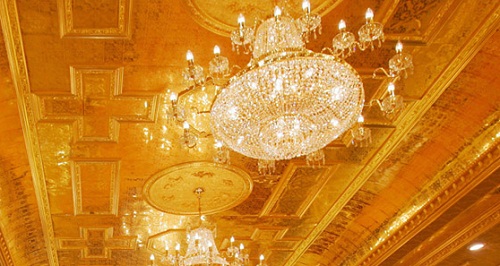 Sink, toilet and even walls made of gold. Jewellery shop “Golden House” of Hong Kong 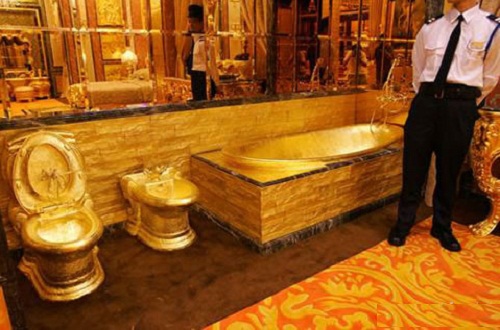 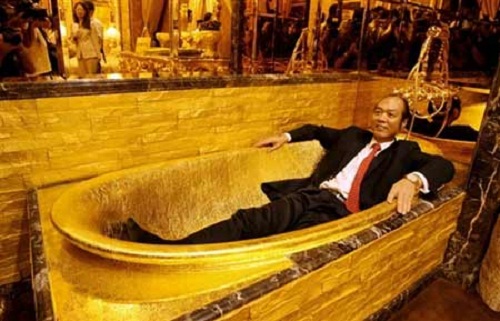 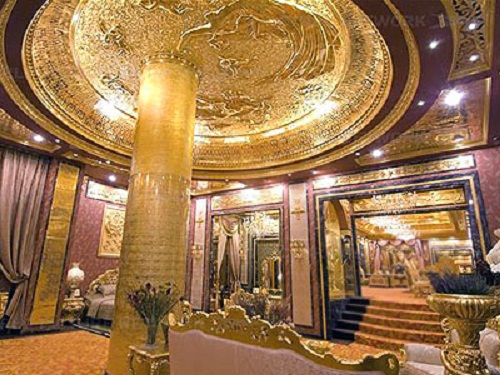 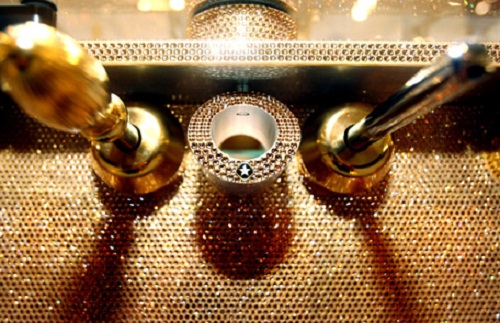 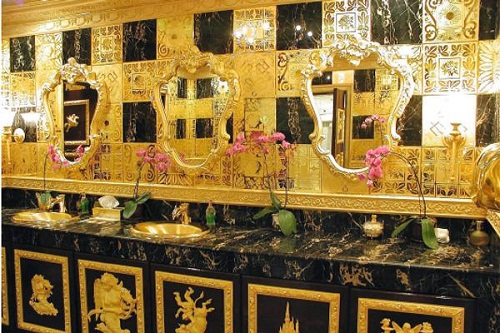