Weird Inventions Made by the Chinese 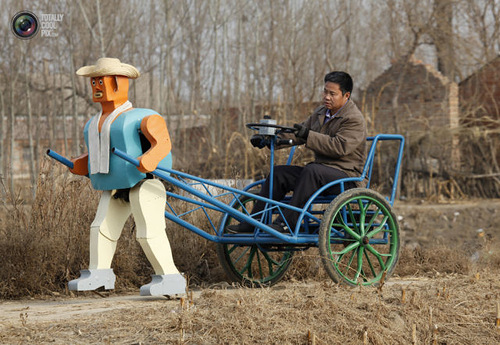 Farmer Wu Yulu, 48, rides in a cart pulled by his walking robot. Weird Inventions Made by the Chinese

Weird Inventions Made by the Chinese
Take a look what Chinese people can invent for their everyday need. For example, Farmer Wu Yulu, 48, rides in a cart pulled by his walking robot. According to Hobby inventor Wu, he started to build robots in 1986. Meanwhile, he has invented 47 robots with different functions like jump, paint, drink, pull cart, massage, and help cooking. 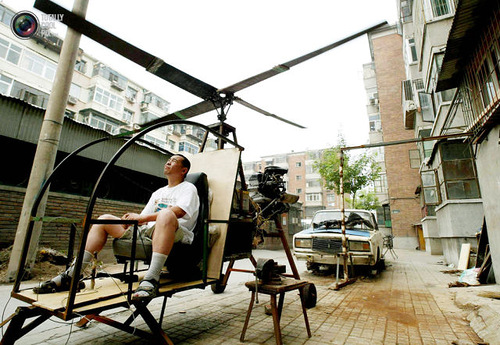 In fact, Yu Jun follows in the footsteps of his younger brother who lost his life in a national park in central China. It was at the end of a 20 year search for the legendary Bigfoot. And now he intends to continue the quest from the sky. Without any formal education in aerospace science, Yu Jun spent five years constructing the helicopter from spare parts belonging to a dilapidated Lada automobile (in back). 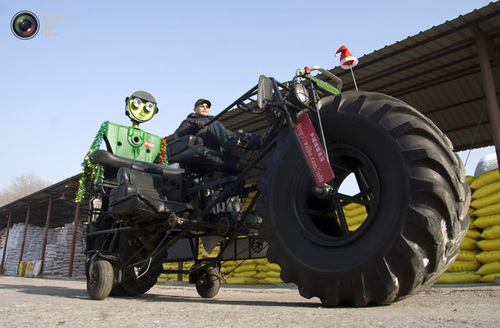 Zhang Yali, 49, tests a giant bicycle designed and made by him and his friends

The 3.2-metre-high and 5.5-metre-long three-seated giant bicycle, weighing over one tonne, cost Zhang more over 20,000 yuan (3,156 USD). Zhang spent two months making this bike as a gift for his son, a 25-year-old part-time cartoonist. 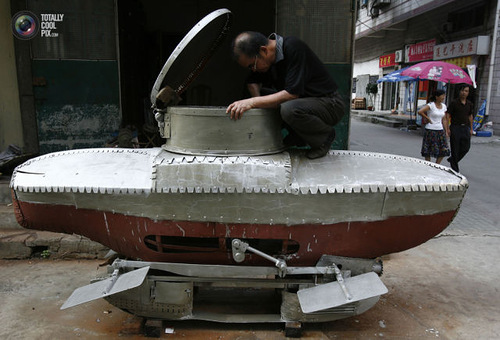 A local farmer Li Yuming works on his unfinished miniature submarine Xiaguang V, which is 3-metre long, 1.2-metre in height, has a maximum diving depth of 20 metres, and can hold two adults and one child at the same time. 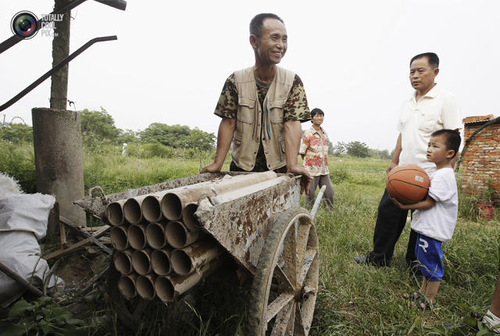 Yang’s cannon, made out of a wheelbarrow, pipes and firing rockets, used to defend his fields against property developers who wants his land. 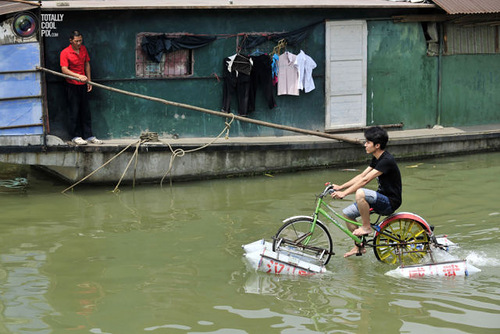 Lei Zhiqian rides a modified bicycle across the Hanjiang River

The bicycle, equipped with eight empty water containers at the bottom, modified by Lei’s instructor Li Weiguo, who hopes to put his invention into the market.

Weird Inventions Made by the Chinese 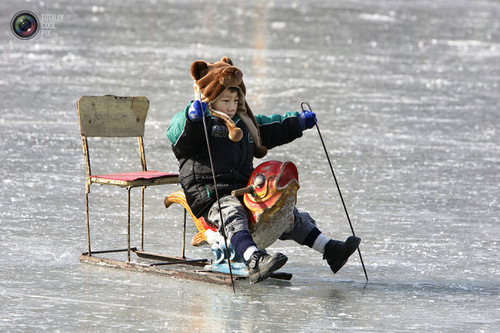 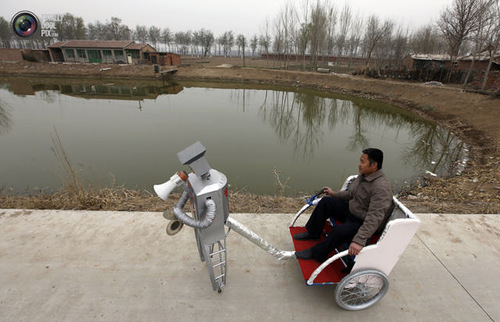 Farmer Wu Yulu, 48, rides in a cart pulled by his walking robot 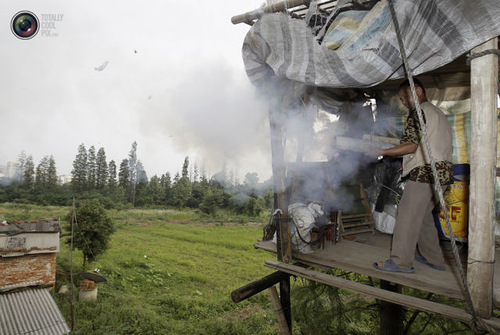 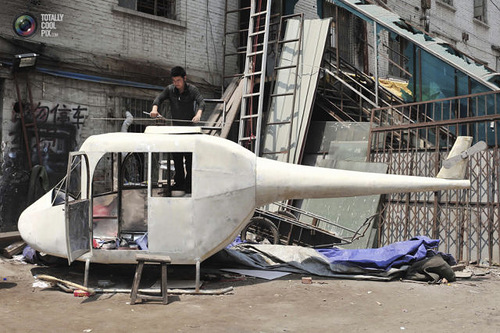 Gao Hanjie installs the rotor blades on his homemade helicopter, which is 6-meter-long and 350kg 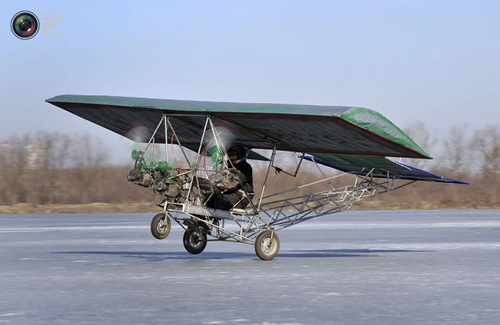 Ding Shilu, an automobile mechanic, sits in his self-made aircraft 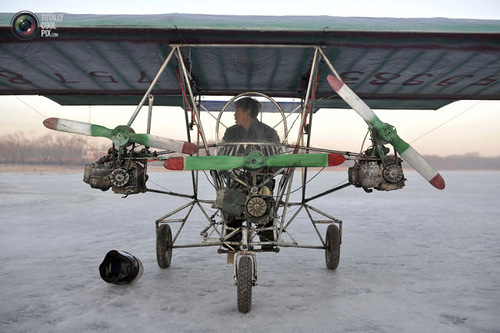 Ding Shilu, an automobile mechanic, sits in his self-made aircraft. It weights about 130 kg (287 lbs) and made of recycled materials including three motorbike engines and plastic cloth, cost about 2600 yuan ($395) 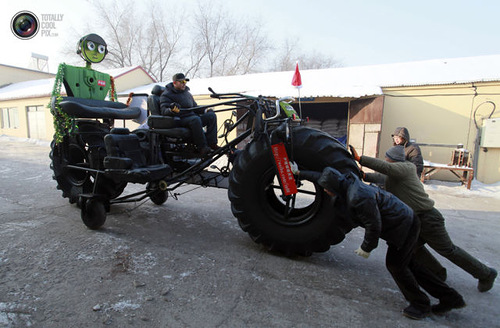 Zhang Yali, 49, tests a giant bicycle designed and made by him and his friends 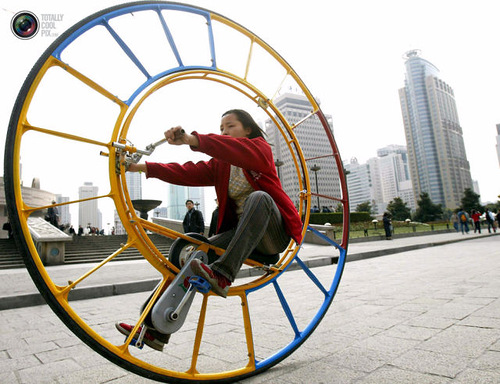 The unicycle designed several years ago by Chinese inventor Li Yongli, who called it the number one vehicle in the world 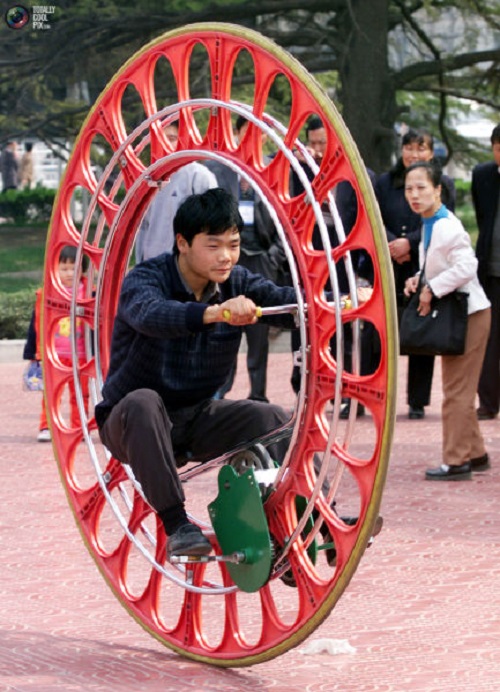 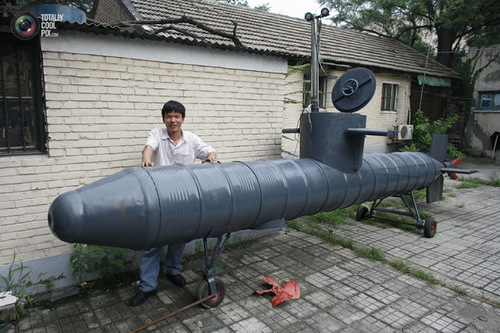 Tao Xiangli stands beside his homemade submarine. His submarine made from old oil barrels but fully functional with a periscope, depth control tanks, electric motors and two propellers 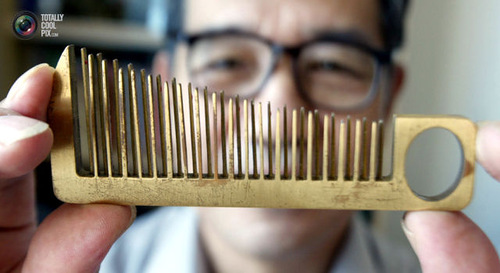 Han Yuzi, 63, inventor, holds up one of his creations, a hair comb that doubles as a small hand-held musical instrument. It measures 126.2 mm in length, 48.6 mm in width and weighs 68 grams