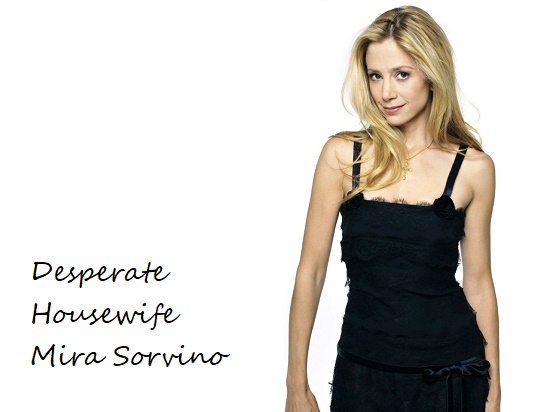 Desperate Housewife Mira Sorvino
The whole life of the famous actress, Oscar winner Mira Sorvino, the continuer of the acting dynasty of Paul Sorvino, the favorite of Woody Allen and Guillermo Del Toro, reduced to vegetable mixes, pies and diapers. Previously, the stories of her high-profile romances with the most interesting men of Hollywood appeared in fashion magazines. And now Desperate Housewife Mira Sorvino appears exclusively in the rubric “Home and Family”.
Mira, witty, mocking, independent girl used to break rules and challenge gender stereotypes in modern society, one by one gave birth to four. But she once studied at Harvard and specialized in the problems of “penetration of African cultural influence in China.” She mastered Chinese day and night, and everyone knows what a complicated language it is. But now in her head Mira has a book of useful recipes instead of Chinese words.
Studying at Harvard University, Mira Sorvino dreamed of a serious professorial career. And it was Mira Sorvino who in mid-1988, as one of the most promising female students, was sent for an internship in China. For eight months she collected material for scientific work and was simply fascinated by Beijing and her new friends – Chinese students. 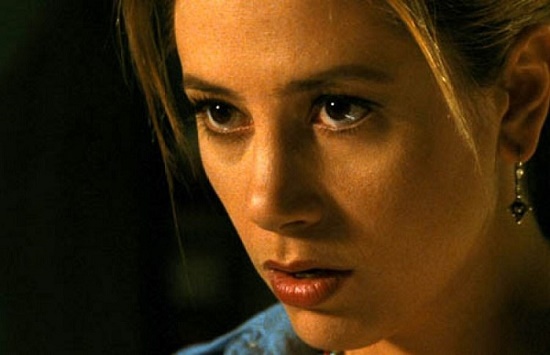 But then Mira had to return briefly to Harvard to obtain a diploma. It is interesting that she planned to finally move permanently to China and work as a teacher in some Beijing school … However, fate had its own plans for her life. 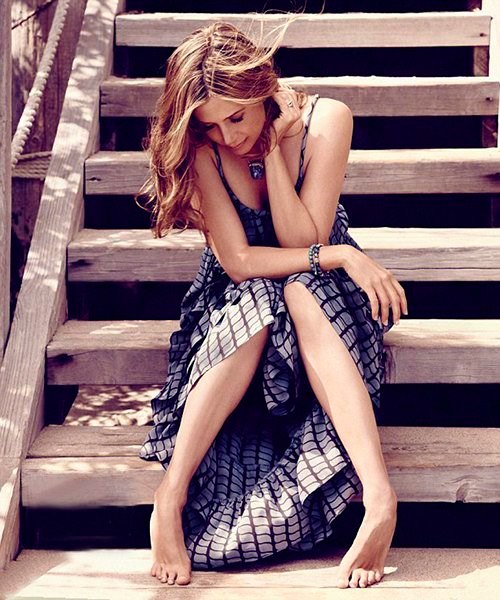 After graduating from Harvard, Mira first went to the hairdresser to have her hair dyed. This pleasure cost her fifty dollars. Apparently, the young master was obviously inexperienced, and the consequences did not take long: the hair began to fall out. But Mira did not lose heart, she only had one question: if she, finally bald, will she lose her job? She just got a job in an Italian restaurant. But everything worked out: at first the girl went to work in a cap. Sweet, helpful, smart – no visitor to the restaurant could not assume that this young lady in a neat apron holds a diploma from one of the most prestigious universities in the country …

In her cramped apartment in Manhattan (fifth floor and broken elevator) there was not even a toilet: it was on the opposite side of the corridor. But she firmly decided not to depend on her parents and made a living by any means: model shootings for magazines, editing of screenplays, even acting as a vocalist in a small jazz club.

Once, by some random wind, Mira entered the acting school, and … she suddenly realized that this was hers. No, she did not want to be a star, flaunt on the covers of magazines, smirk at smiling in photographic lenses. She just wanted to play … Mira was fourteen when she saw the film about the fate of actress Francis Farmer in the performance of Jessica Lang. The last 20 minutes Mira sobbed in awe … This was the strongest experience of her early youth. Realizing, even at the age of twenty-two, that she wants to become an actress more than anything else in the world, Mira seemed to have begun to see. At last she had a really important goal, and all the others, like serving science or teaching Chinese children to read and write, didn’t exist any more.

But her father … He categorically could not understand this whim of Mira. The future of his beloved older daughter, with the brilliance of graduating from Harvard! The acting path of elder Sorvino was very thorny: he knew not only success, but also years of unemployment and despair. Could he have allowed a beloved girl to experience the same thing ?!

However, Mira could not understand this. She was already an adult twenty-year-old girl, courted by Richie Bart and John Snow … Now she seemed to be waging war with her father. Paul wanted his daughter to meet with her peers, and Mira met exclusively with men who were much older. Dad insisted that she gave up the idea of acting, but his daughter demonstratively went to casting, wearing the shortest skirt.

Meanwhile, her Italian roots and knowledge of Chinese helped her to get a role in “Guiding Light”. According to the scriptwriters, her character Julie Kamalletti was the daughter of an Italian and a Chinese woman. Then came the main role in the movie “Amongst Friends” (1993). The whole crew adored Mira for her unprecedented enthusiasm. Mira always laughed, energetically gesticulated and looked wonderful even in rubber boots and without makeup. In general, director Rob Weiss did not regret for a minute that he gave the main role to Mira.

After the loud and this time it was her own premiere in New York, the roles fell on Miss Sorvino one after another. In the romantic comedy “Barcelona” she played a Spanish translator. Noteworthy, it took Mira only two weeks to learn foreign language: after the Chinese, it was not difficult for her. Returning from filming in Spain, she received an audience with Robert Redford himself, who offered her a role in his film “Quiz Show.” The success of the film surpassed all expectations! Redford’s film was nominated for four Oscars! And very soon Mira Sorvino herself received an Oscar for the main role in Woody Allen’s film “The Mighty Aphrodite.” The ladder, climbing which for many talented actresses took many years, Mira skipped over in a few years.

By the way, on that Oscar ceremony, Paul Sorvino was much more happy than his incredibly embarrassed and confused daughter. Now life was carrying her forward at a frantic pace … 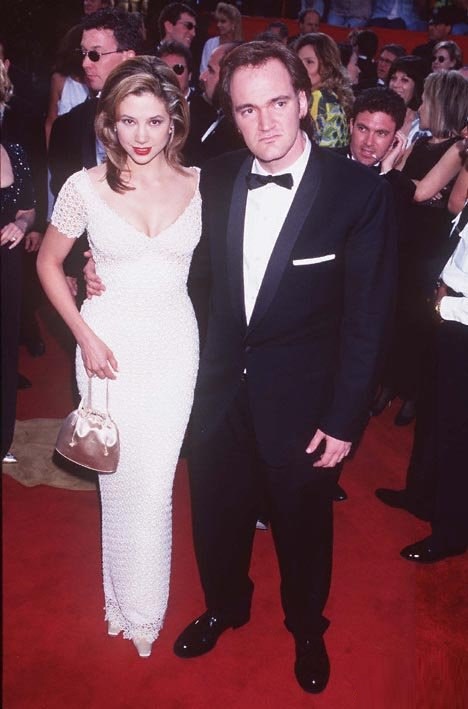 The romance of Mira with Quentin Tarantino also began quite suddenly. They first met at the Toronto Film Festival. An unceremonious guy in a tuxedo immediately invited Mira to drink. Obviously, he simply did not imagine that there was any other way to get to know a young pretty girl. Of course, she knew who it was: Tarantino had just blown up Cannes with “Pulp Fiction”, and he had a reputation as a crazy genius. He was so charming, strange, wild. And completely different from her previous boyfriend: abstruse students, vain actors, or those adult men who pretended young fellows. 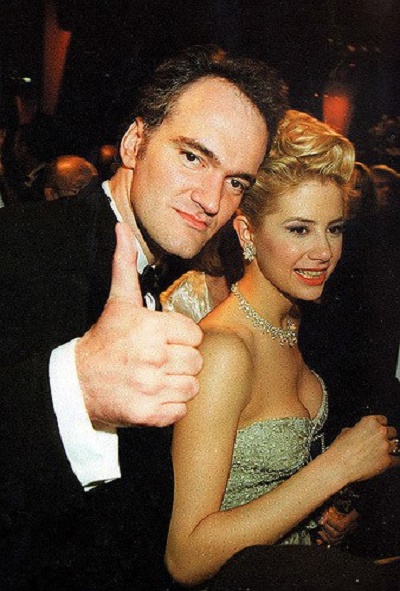 Tarantino and Mira at the 68th Academy Awards, 1996 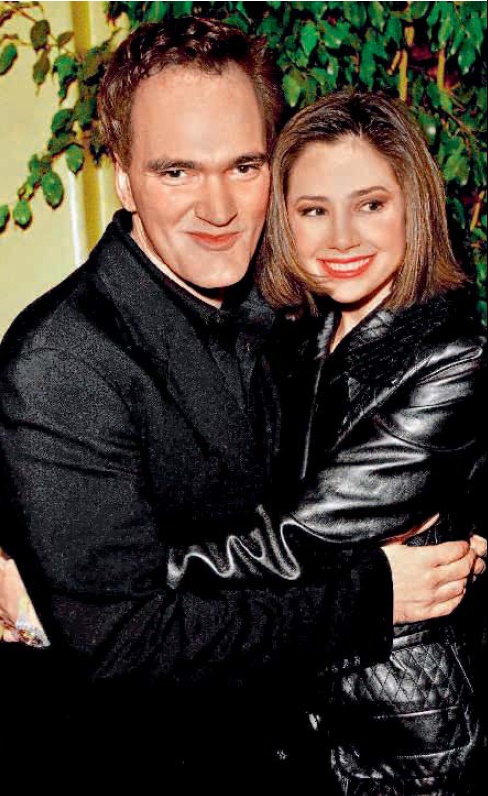 They first met at the Toronto Film Festival

American journalists were perplexed: Mira, refined, educated, from such a respectable family – and her beloved without a clan and tribe, who for the first time ordered a prostitute at the age of 16 years … How is this possible ?! And they were happy. Their relationship lasted almost three years, although Quentin and Mira never lived together. Even when coming to Los Angeles from New York to shoot, Miss Sorvino did not stop at Tarantino’s, but rented a separate apartment.

Quentin took his lady to expensive restaurants. Somehow they celebrated Valentine’s Day in the best New York restaurant, and the head waiter the next day messed up the journalists about the festive menu: black caviar, lobsters, truffles and … a sea of ​​hot kisses. “Evidently, they are madly in love”, – summed up his observations the talkative employee of the restaurant.

Tarantino confessed to Mira that he was jealous of her to the directors and wanted to shoot her himself, but … they did not manage to work together.

In March 1998, Mira’s spokeswoman Mara Baxbaum officially announced that the couple had split. On the reasons there were many rumors, evil tongues attributed the actress love affair with a partner in the film “At First Sight” by Val Kilmer (1999). But everything turned out to be trivial and simpler … Relations with Tarantino reached the point where it was necessary to make a decision: either marry, or disperse in different directions. Mira felt: she needed something more than just a fairly infrequent meeting … But marriage could not be a question! Everyone in Hollywood knew: Tarantino had sworn not to marry before sixty. He is loyal to a single muse – cinema.

“Well, to hell with him,” thought Mira gloomily, hanging around the Central Park. In the summer of 1998, she for the first time allowed herself a lot of rest and absolutely nothing to do … Her films, one by one became successful. “Romy and Michele’s High School Reunion,” where she starred with Lisa Kudrow became a hit in the late 90’s. Mira tried herself in all genres, worked with the most rated directors and … fell into a cruel longing. In fact, is it worth it so obsessively to work? Most recently, her beloved grandfather died, but she was so busy on the set that she could not say farewell to Ford Sorvino …

Ahead of Mira was a series of loud and completely stupid love affairs. As is the case with many famous women experiencing a crisis in life, Mira could not resist persistent male attention. She really could lose her head. Alive, mocking, witty … And a stormy affair with Tarantino, even if left in the past, added to an actress extra points in the eyes of other men.

She met with Olivier Martinez for two years. He was handsome. In his native France, Olivier became famous for a violent romance with actress Juliette Binoche, who was much older than him, and in America was not going to back away from his own rules. He also needed to somehow consolidate here … And Mira Sorvino – a good family, an influential dad and friends. She is the favorite of the public, an intellectual with a Harvard diploma … Olivier walked behind Mira like a shadow, and – God only knows how he did it – even fascinated her fastidious dad. “He has charisma,” Paul once remarked. The influence of this charisma on Mira worked: she even helped her lover to get a role in the film “Semana santa” (where she played herself). … 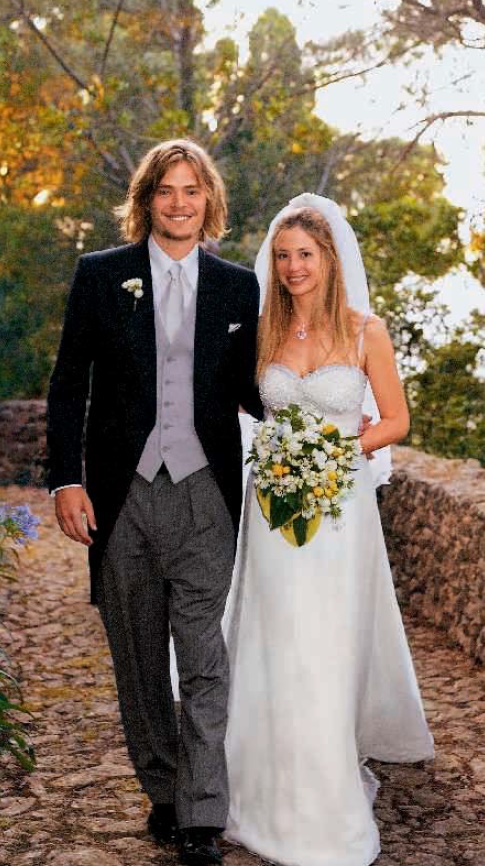 Having left without any regrets with Martinez, Mira for a short while dated Willem Defoe. This actor-intellectual much more suited to the Harvard graduate, but … it did not work out. So she wandered from one gentleman to another until Christopher Backus appeared on the horizon. They were accidentally brought together by a friend of Mira Samantha McMillen.

That evening, at the house of Samantha, the guests played charades. Of course, there wasn’t anybody equal to Mira: she guessed the encrypted words at the first attempt. Opposite her on a low couch, folding his legs in Turkish, sat a young guy from another team. He did not guess anything at all. But it did not spoil the impression. Chris Bakus was from the breed of those handsome men whom everybody love: mothers, daughters, and even dogs. A shy smile, wide blue eyes … Mira could not imagine at that moment that this unknown actor, also fourteen years younger than her, will become her husband and she will give him four children … But that’s exactly what happened.

And now, American magazines call Mira, not Victoria Beckham, a supermama: who else can hold a new born child with one hand, and in another – a phone, a handbag and a glass of coffee ?! It’s true that Mira almost forgot about the cinema during these years.

But she did not have time to read the scripts, or spend hours somewhere. Mira can no longer afford such fanaticism: she has children. And a young husband, for whom she cares. Does she dream of the second Oscar? Who knows … The main thing for her is to just sleep. At least an hour … 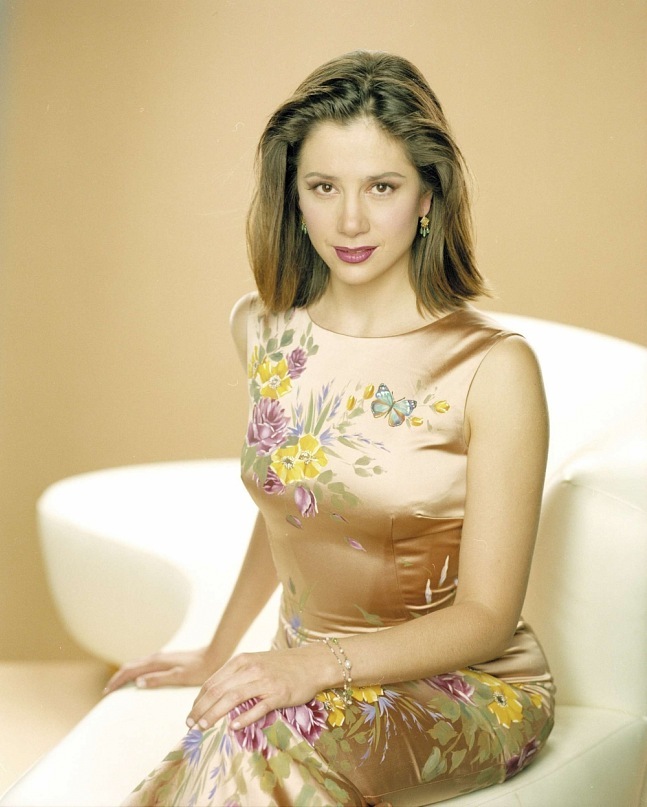 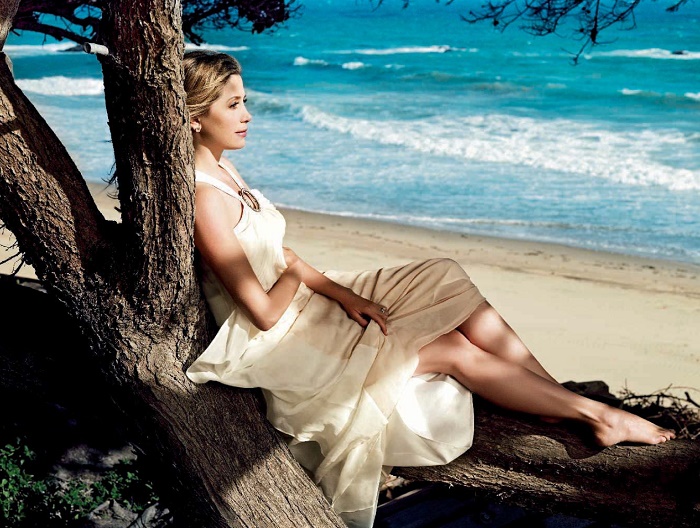 As one of the most promising female students, Mira Sorvino in mid-1988 was in an internship in China 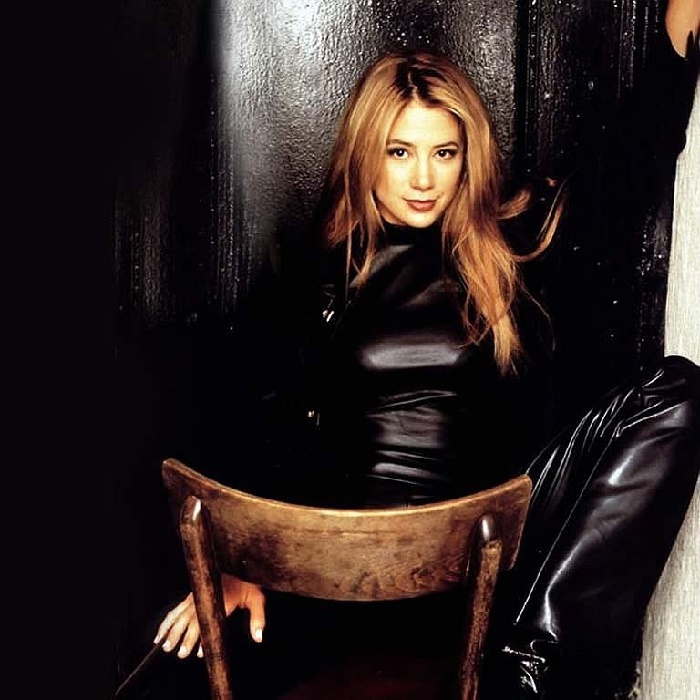 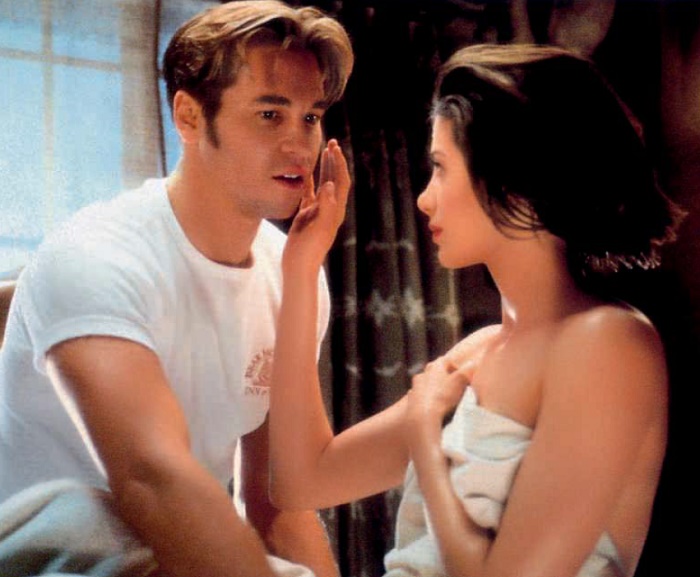 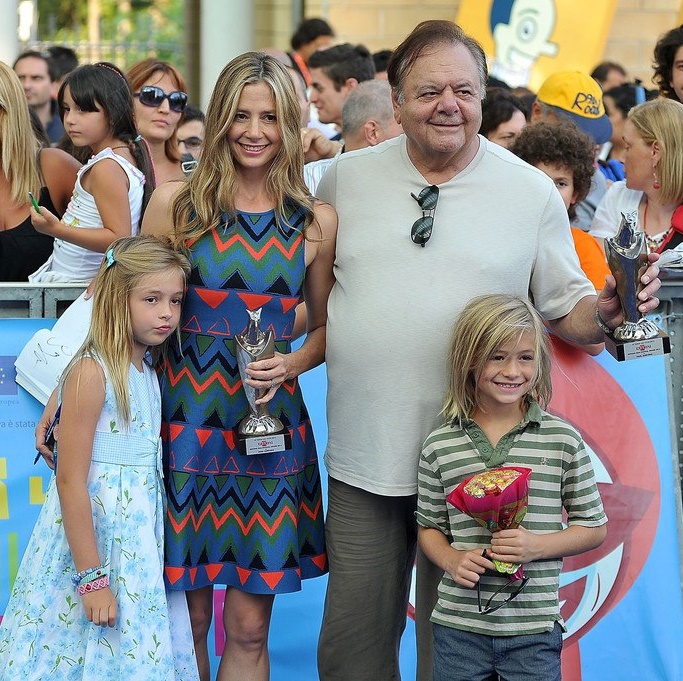 Family – Mira, her dad and children 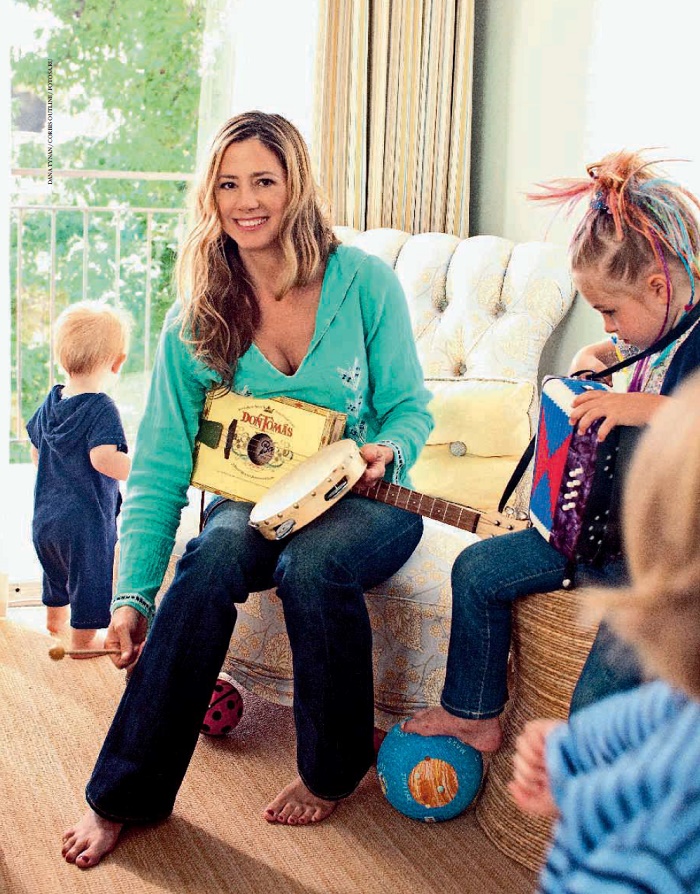 In fact, the main thing for her is – family. Desperate Housewife Mira Sorvino 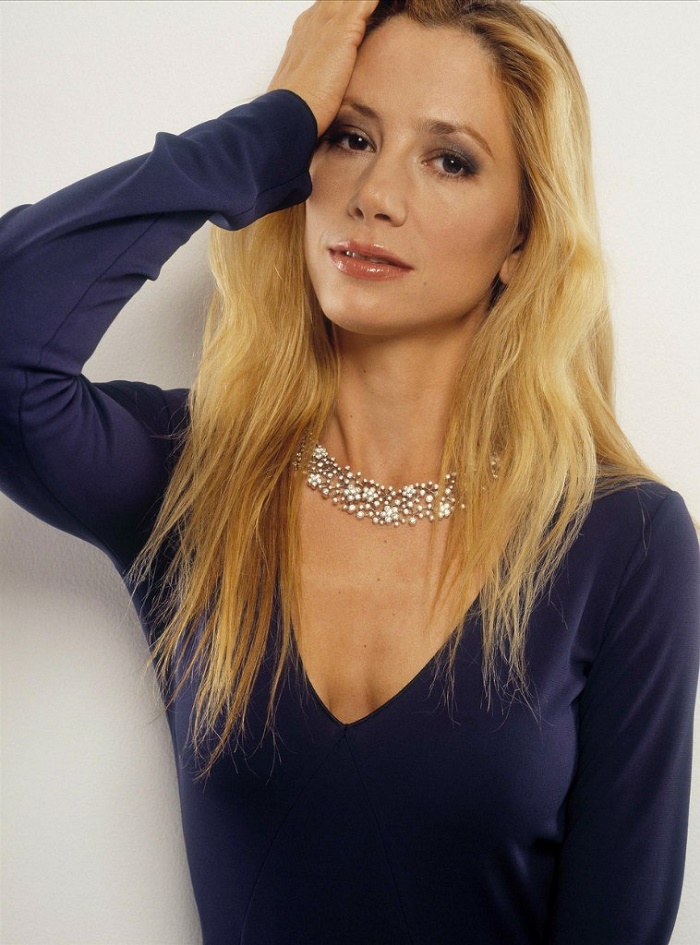 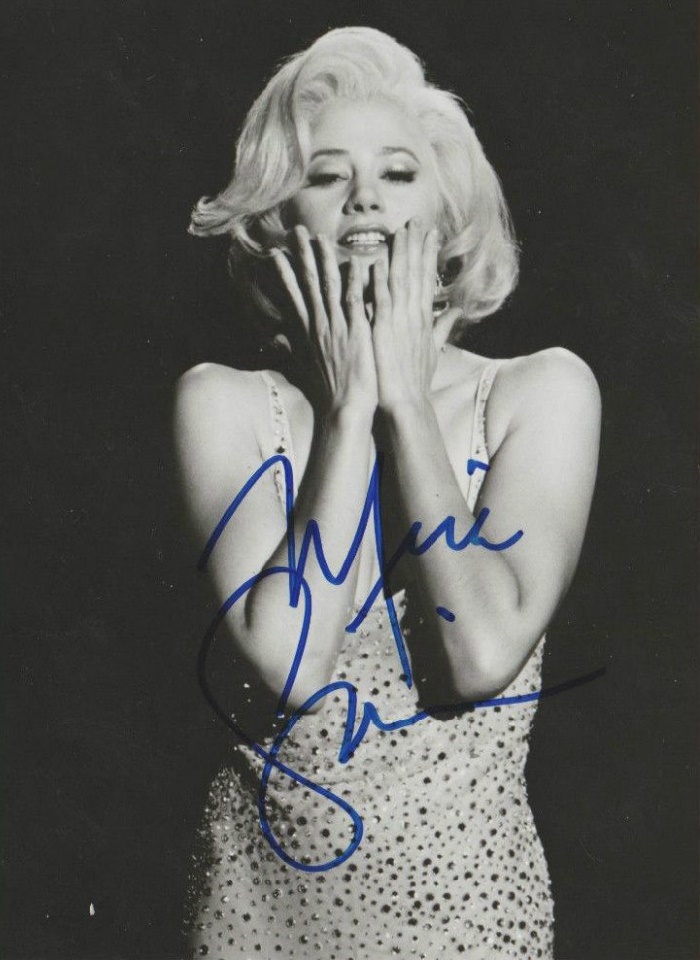 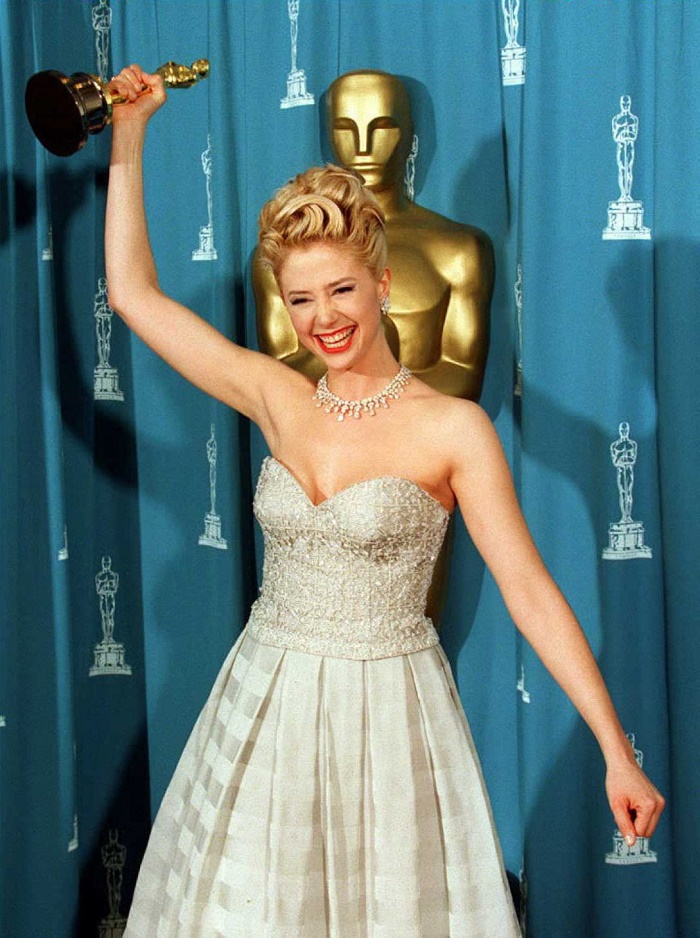 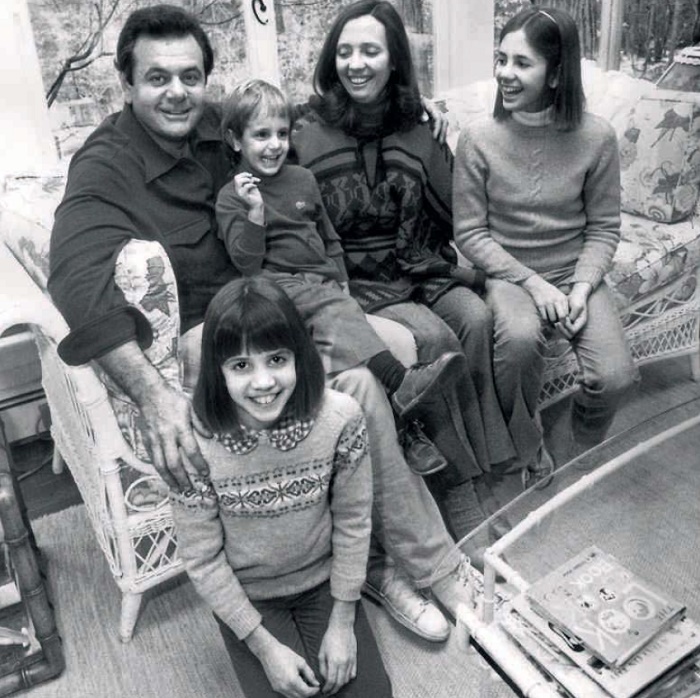 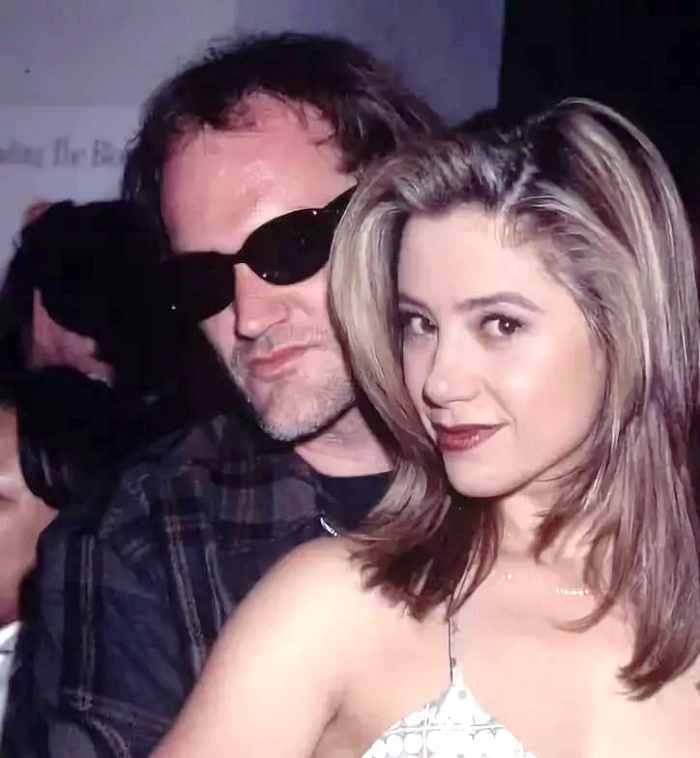 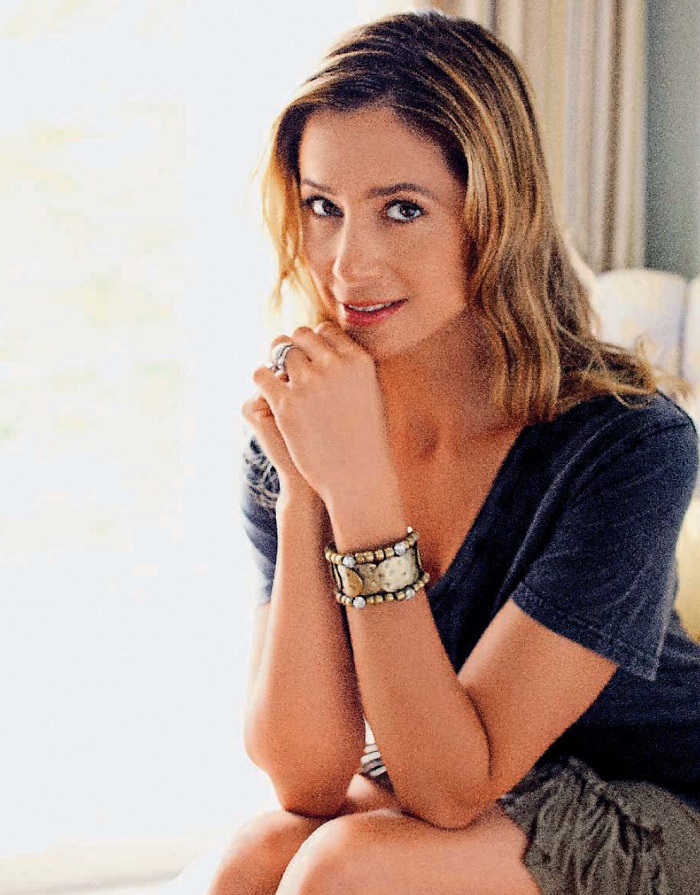 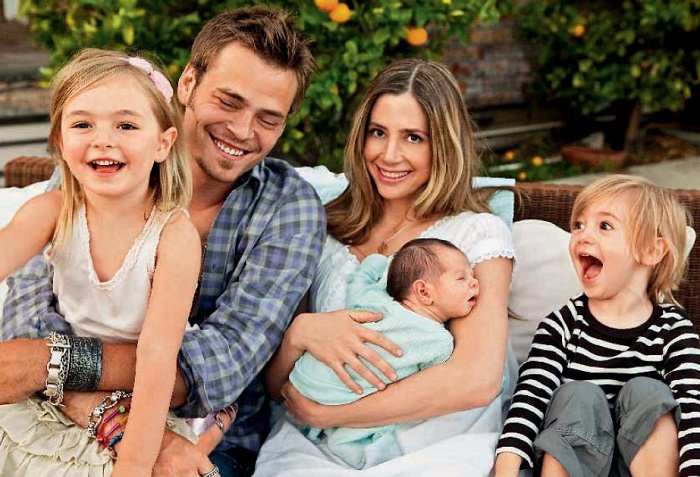 With children and a young husband. Desperate Housewife Mira Sorvino 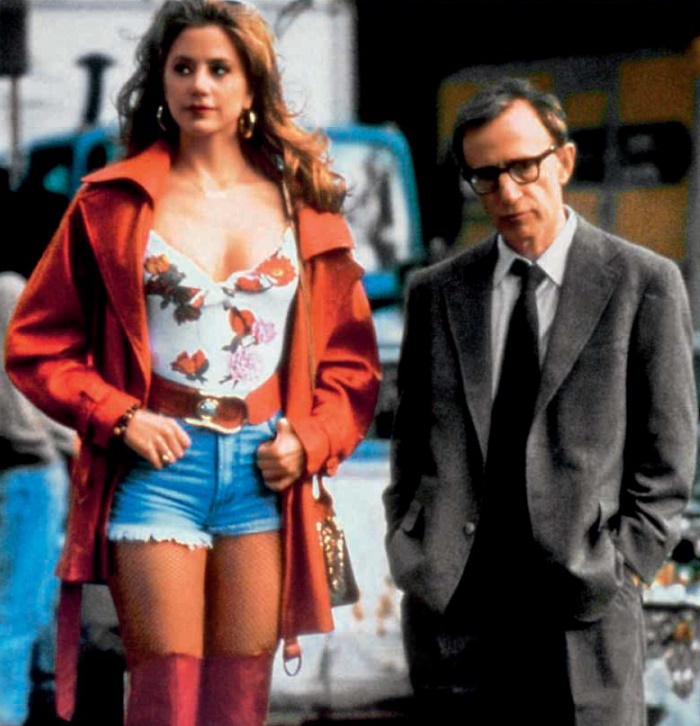 Young Mira and Woody Allen in the film ‘The Mighty Aphrodite’ 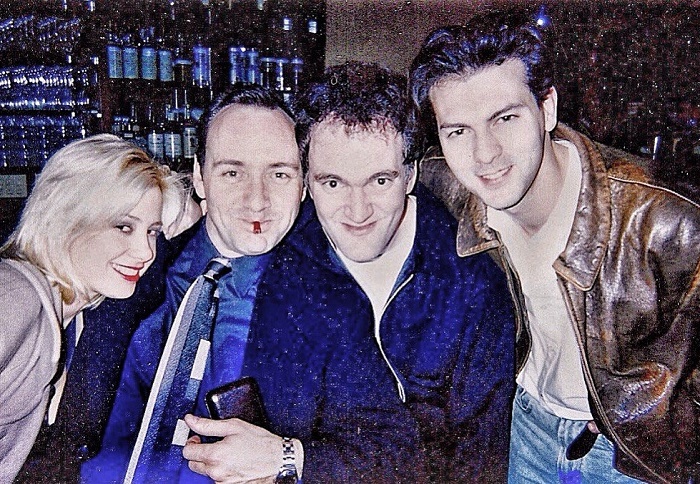