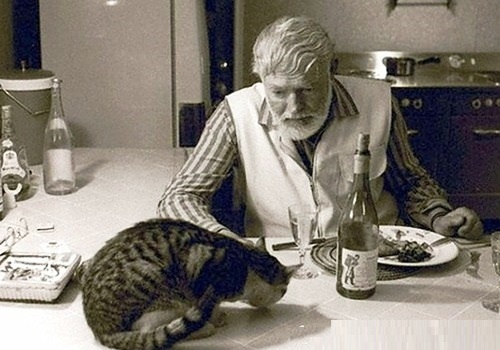 Ernest Hemingway fifty-seven cats
The famous writer, carefully cultivated the image of a “real man”, and fed poor cats. Perhaps they seemed little lions to him. Or, probably, he felt a cat’s something … In fact, cats played a significant role in the writer’s life. Indeed, very often in his works, especially of late, there are many different types of domestic carnivores. Even journalists wrote on Hemingway’s love for cats those years. 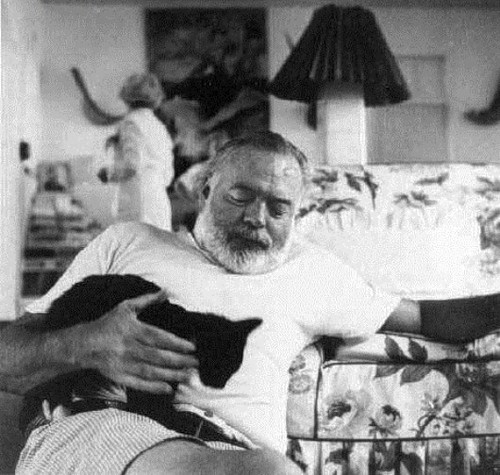 The famous writer had an inexplicable affection for these creatures

Meanwhile, every year thousands of people visit the museum-house of Ernest Hemingway. They are happy to see the desk, behind which he created “A Farewell to Arms,” “For Whom the Bell Tolls” and other famous works. And an additional attraction – more than half a hundred cats roaming around the area of one hectare. Hemingway had an inexplicable affection for these creatures. In 1957, at his villa in a special room lived 57 animals: 43 adult cats and 14 kittens.

The famous American writer Ernest Hemingway got an unusual cat named Snowball, from Captain Stanley Dexter in 1930. Noteworthy, Hemingway was not fond of cats before, but Snowball won his heart so much, that later he had the whole colony of these wonderful cats.

Black-and-white Charlie Chaplin looks like the original very much. There is also a redhead Ivan, which should not be confused with the red and Pablo Picasso. Ivan likes to keep watch at the cash register. Almost all cats are neutered, except for one or two for the continuation of a noble family. The museum needs money to feed the “heirs.” Cats are often inspected by the local vet, who monitors the state of their health, making all the necessary vaccinations, if necessary, provides medical care.

Interestingly, Hemingway introduced the tradition of giving nicknames, certainly with the sound «S» – supposedly very favorite for meowing tribe. Fur dead friends were buried in a special household cat cemetery – right under the door of the dining room. 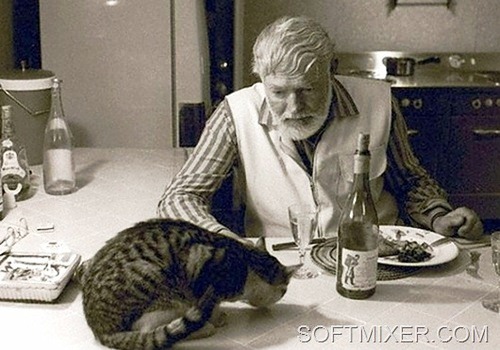 In the southernmost city in the continental U.S., Key West, Florida there is a very beloved museum which attracts visitors not only for its exhibits.

Cats freely roam from room to room, where Hemingway wrote his novel “A Farewell to Arms,” and “Have and Have Not”. Museum staff looks after the cats. Each cat was named in honor of some celebrity or a hero of one of the great works of the author. The names of the heirs of Snowball with each decade become pompous. Among her living descendants – gray whale Harry Truman, tortoiseshell 3-colored Gertrude Stein, with beautiful white breast smoky Audrey Hepburn and Sophia Loren.

When Hemingway died, his house became a shelter for the tailed friends. If you visit this amazing museum, you will be able to see Hemingway’s cats walking freely in the mansion. You can find them almost everywhere, even in the bedroom of a great writer. British actor and writer Michael Palin said that people visiting the museum of Hemingway have interest just in cats, rather than other attractions. They animate the lifeless empty rooms. 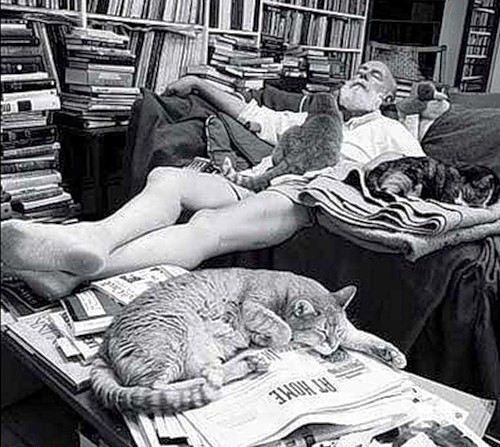 In the company of cats, Ernest Hemingway

Now the museum is home to approximately 60 cats. From fellow males these cats differ in the number of “fingers” on the feet, they may be 6, and some even had 7 or 8. This physiological feature cats inherited from their progenitor – the cat Snowball. She had additional finger on her feet, and this feature, so-called polydactyly, considered useful for the cat … No other characteristics that unite all living Hemingway’s cats, can be detected. They are of all kinds and proportions. Some cats still prefer to stay in the bush from annoying tourists, and curious spectators.

Unfortunately, Hemingway cats had problems with the U.S. Department of Agriculture. Officials say that the cats are shown to the public as if in the zoo, and according to law, they should be placed into the cages. Museum Director Mike Morawski has been negotiating with the Ministry of unfortunate for the fourth year. As a result, ownership of Hemingway’s museum had to protect the area with a solid wall so that the descendants of Snowball could not leave their “residence.” But this is not enough for the hungry lawyers, they continue to insist on the cages for these independent and freedom-loving creatures. While the museum director fights in the courts, Hemingway cats live peacefully in his home, unaware of the problems. 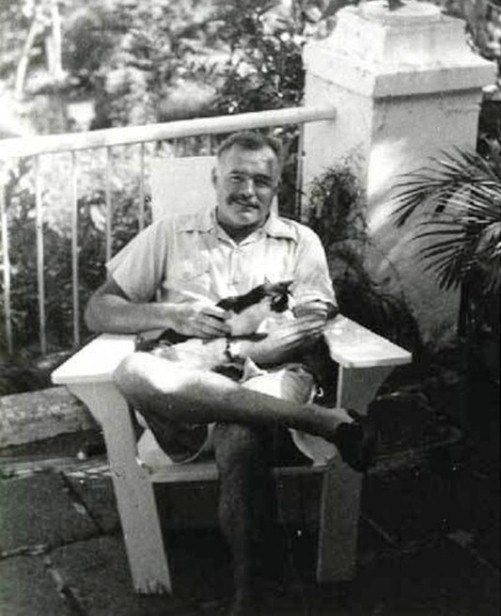 With black and white cat 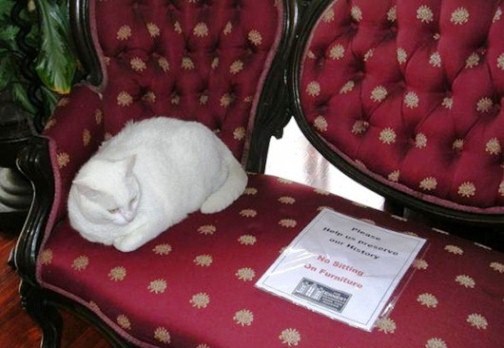 White cat, one of fifty-seven cats 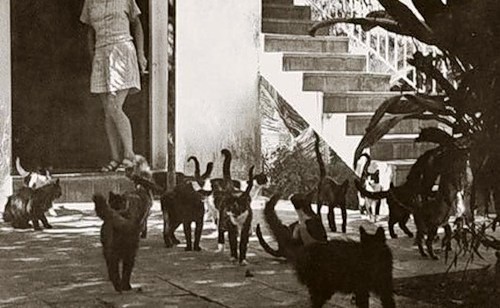 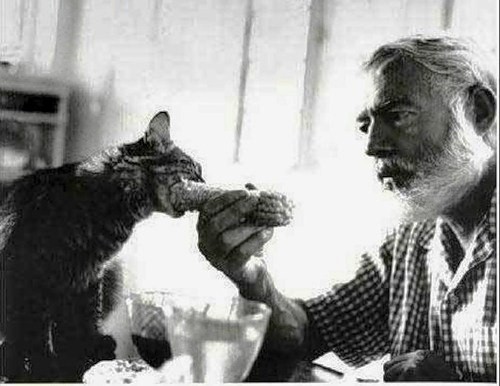 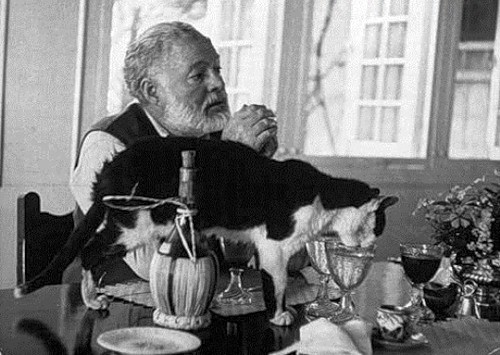 Allowed to walk on the table. Ernest Hemingway and his fifty-seven cats 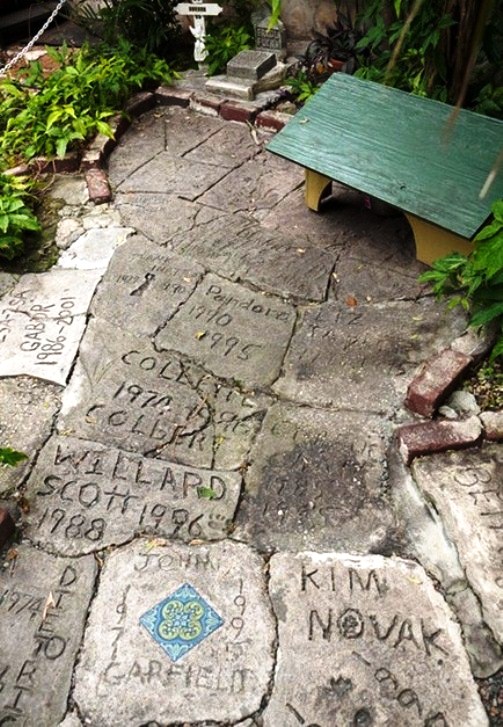 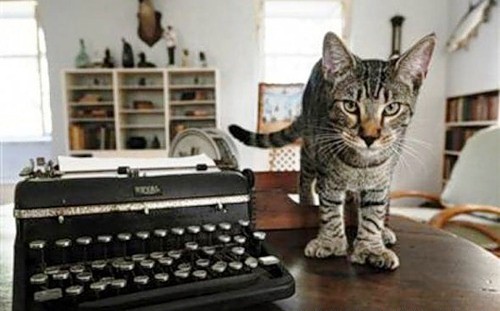 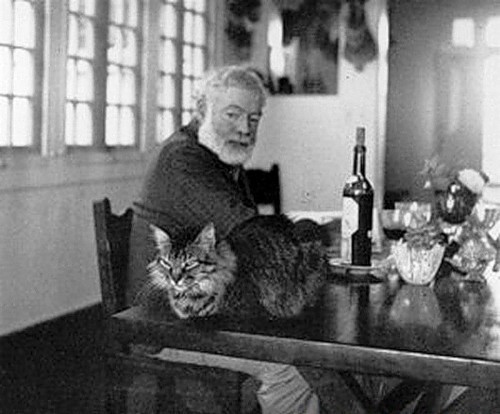 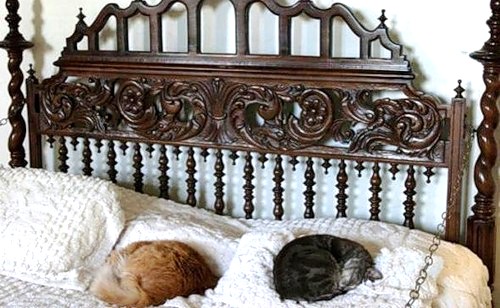 Sleeping on the bed of Ernest Hemingway cats 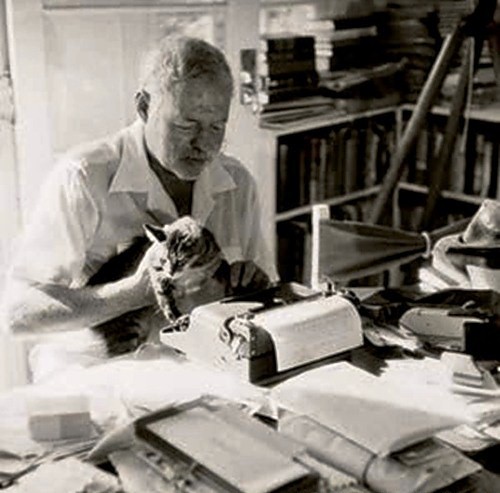 Creating with a cat 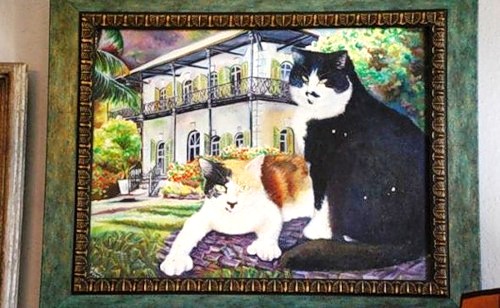 Framed painting in the house of the writer. Cats 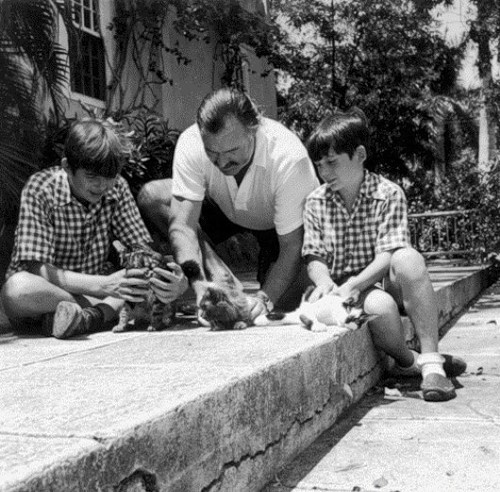 Children and writer with cats 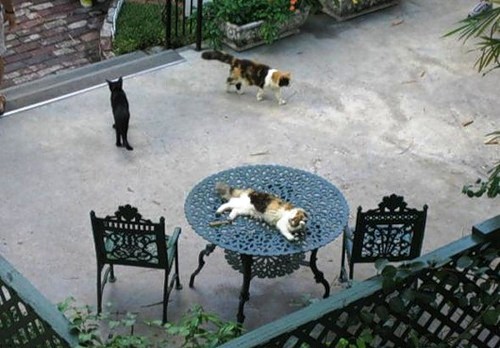 Living in the house of Ernest Hemingway cats 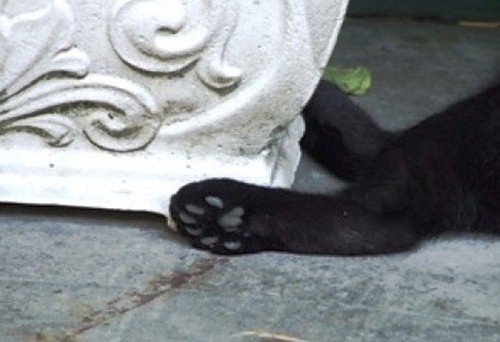 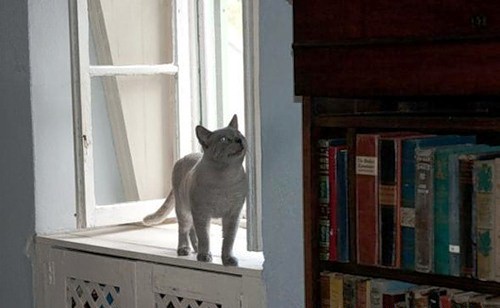 A curious cat on the window 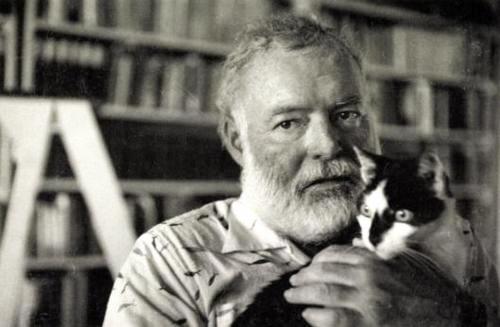 Ernest Hemingway with his cat 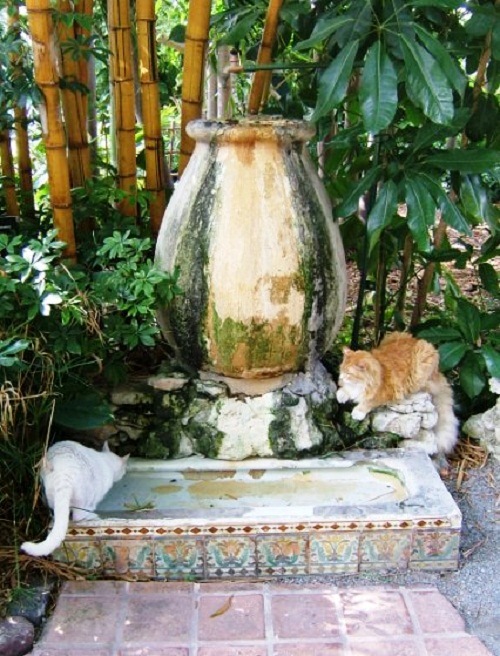 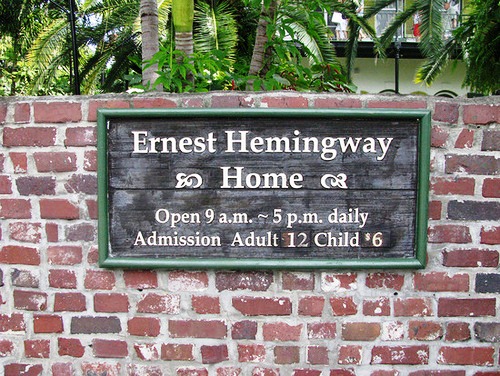 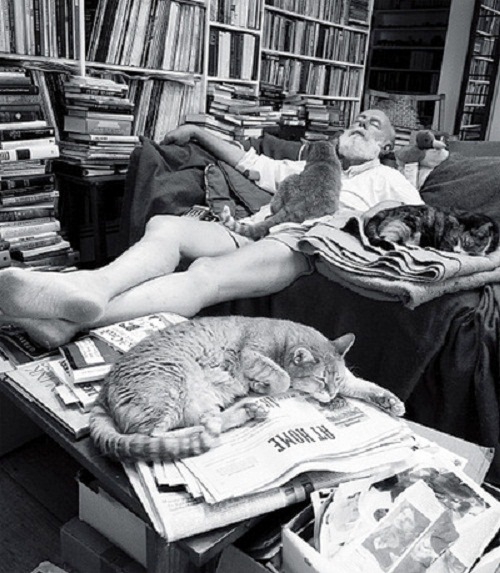 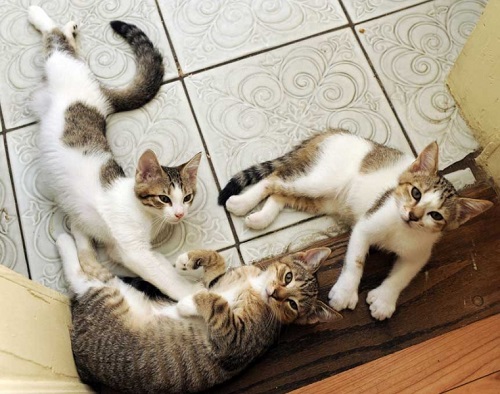 In the photo – Capt Tony, Benny Goodman, and Fats Waller