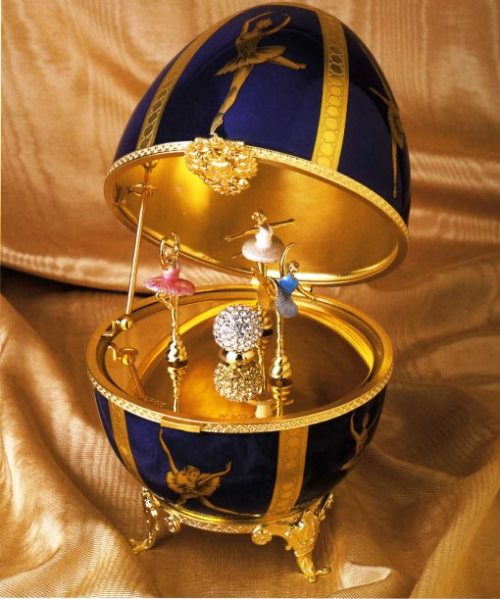 Chicago based company “Exquisite and rare” offers incredibly beautiful high-level reproduction of classic Faberge Imperial Musical Eggs that will hold their value over time. The company focuses on the most exquisite mechanical musical devices of today and yesterday, including Singing Mechanical Birds, Rare Music Boxes, Antique Clocks, Musical Organs, Automatons, and other intricate mechanical works of significance. All of the Faberge Imperial Musical Eggs share a common Swiss music box movement and are done in exceptionally fine hand-painted Limoges porcelain in the styles of the original Faberge eggs that were given as gifts to Russian royalty. Also in the original tradition of the Imperial Eggs each of these eggs has a ‘surprise’ absolute favorites. It has an enameled and jeweled moving carousel that slowly revolves as the Swiss movement plays “Carousel Waltz.” There is only one authentic Faberge 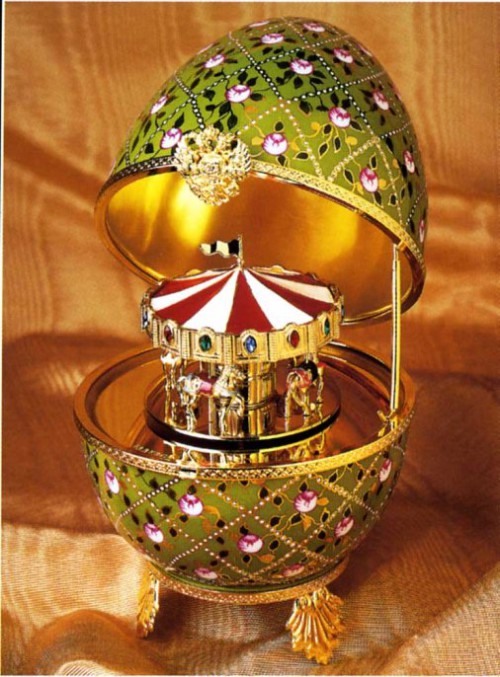 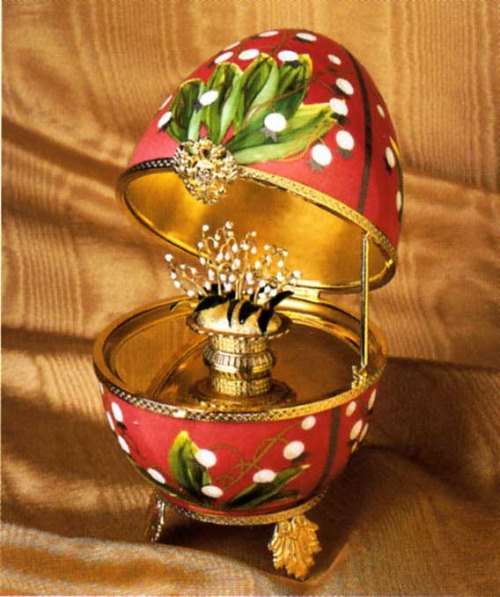 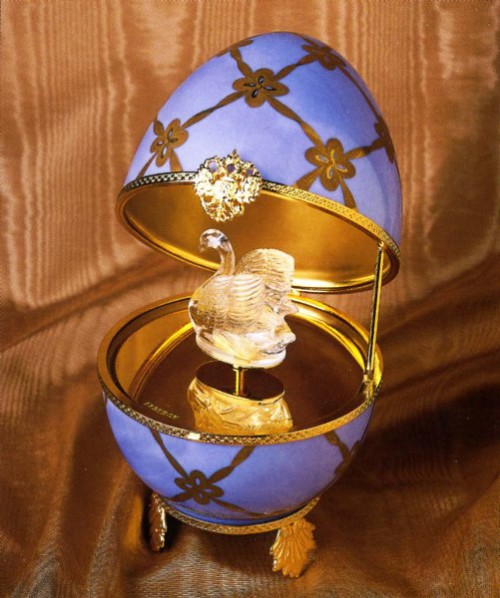 Imperial Swan Musical Egg is made of hand painted Limoges porcelain and opens to reveal a Swan surprise that is made of hand-carved rock crystal. The elegant swan revolves as the Swiss-made musical movement plays Tchaikovsky’s “Swan Lake”. 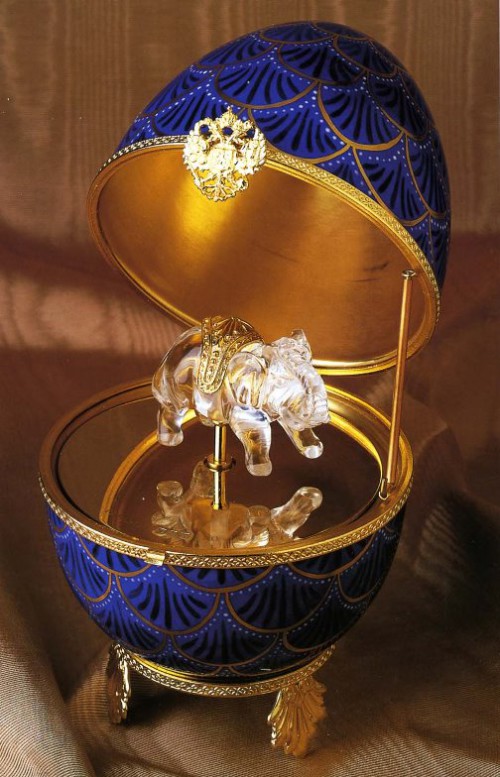 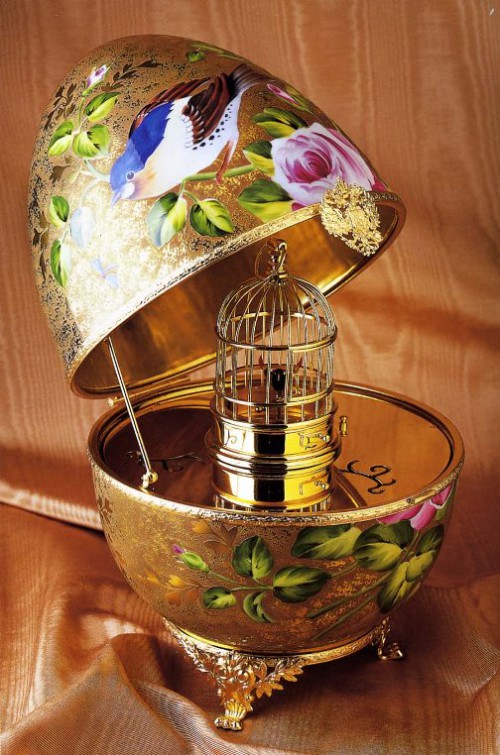 Limoges 24k Gold Birdcage Musical Egg with Singing Bird, stunning Faberge Egg to honor the singing bird tradition is simply exquisite. A hand-painted, 24K gold incrustation Limoges porcelain egg. Like all Faberge Imperial eggs (in the great tradition of the gifts for the Czars) each egg comes with a surprise. The surprise in this egg is a miniature Reuge (Swiss-made) version of the famous singing bird in a gilded cage. The bird has real antique feathers and naturalistically moves its beak and wings as it sings. 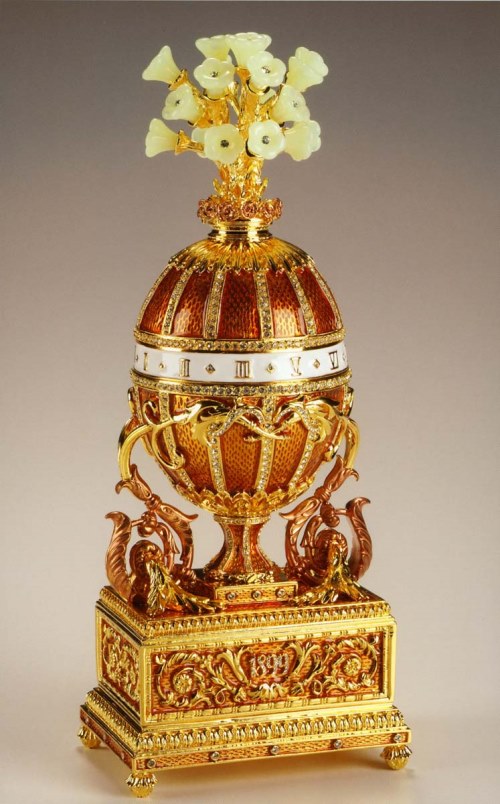 Bouquet of Lilies Egg ca. 1899, also referred to as The Madonna Lily Egg, covered in yellow-gold enamel guilloche accented in 24K gold and divided into panels with twelve strips of rose-cut crystals. An opaque white enamel ribbon dial divides the egg and is inlaid with twelve Roman numerals. On the original egg, a diamond-set bow and arrow indicated the time as the Roman numerals revolved around the perimeter of the egg. In place of a revolving clock, this museum reproduction is a musical egg that plays the Anniversary Waltz. The egg, supported by golden scrolls, forms a vase crowned with a bouquet of delicately carved lilies (symbols of purity and innocence) and green leaves on golden stems. The pistils of the flowers are set with crystals. The bouquet is surrounded by a ring of red and yellow roses (symbols of love). The egg sits on a rectangular base of yellow-gold enamel guilloche accented with gold and the date 1899 in crystals 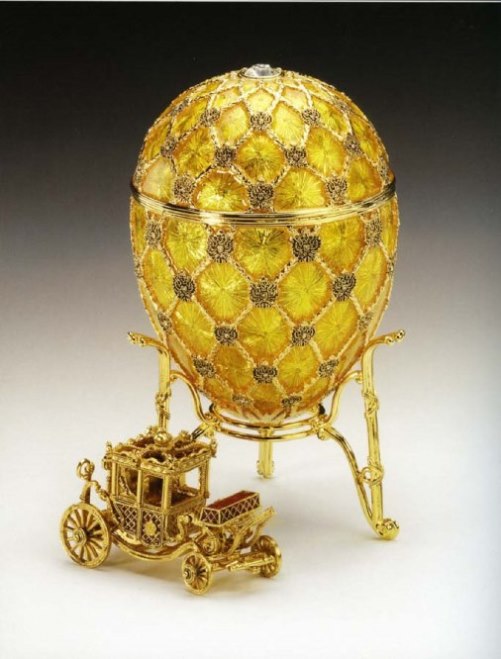 Imperial Coronation Egg ca.1897. One of the most fanciful and well-known of all of the Faberge Imperial Eggs. Given by Czar Nicholas II to Empress Alexandra Fedorovna in 1897, on the first easter following their coronation, this egg is a masterpiece of craftsmanship. The egg itself is enameled a lustrous translucent yellow on an engraved starburst field trellised with bands of laurel. Black enameled doubled-headed eagles of the Romanov family crest, set with crystal are perched at each intersection. The color of the egg is taken from the gold engine-trimmed robes worn by Their Imperial Majesties to their coronation. The surprise inside the egg is a replica of the Imperial Coronation coach in which the Empress rode to the ceremony. 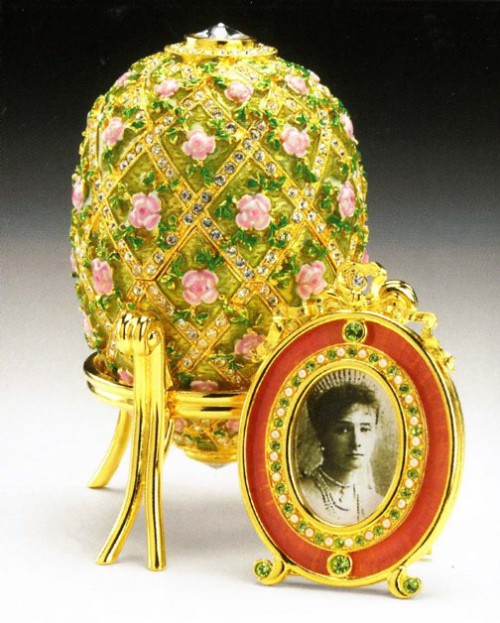 Imperial Rose Trellis egg, originally created in 1907, celebrated the birth of Czarevich Alexi, son and heir of Nicholas and Alexandra. The pink enamel roses, centered within each lattice, enhance the delicacy of the 1,000 hand-set Austrian crystal trellises. The roses are set among old vines and tiny emerald green leaves. While the original surprise is lost, this Rose Trellis egg features a rose-colored enamel oval portrait. 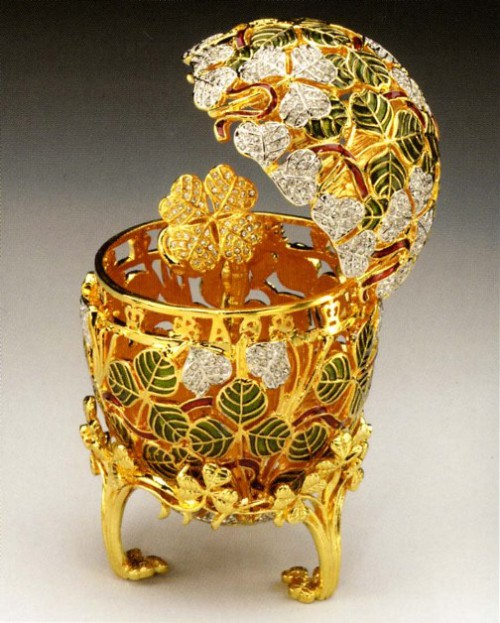 Imperial Clover Egg. Originally presented in 1902, by Czar Nicholas II to his wife Empress Alexandra Fedorovna, the entire shell is covered with green enamel plaque-a-jour green enamel and three-leaf clovers. A ribbon of ruby crystals is threaded between the clover leaves. A tripod stand, also embellished with clover leaves supports the egg. When opened the egg reveals its surprise, a 24k gold-plated four-leaf clover brooch, which can be worn. 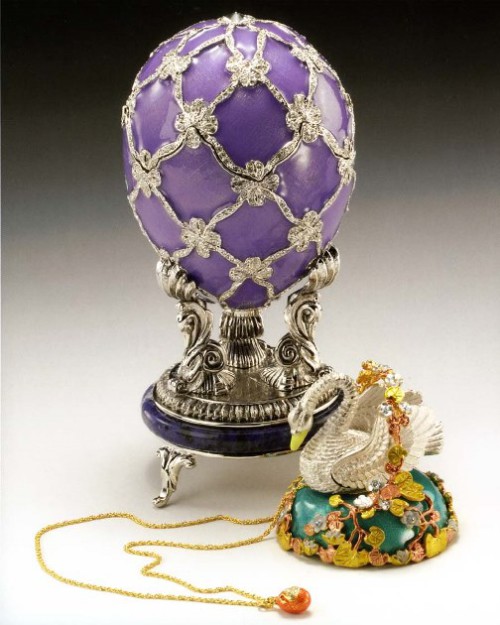 Imperial Swan Egg. In Russia, the swan is considered a symbol of family life and the permanence of the bond of marriage. Swans always live in pairs and are devoted to each other all their lives. Therefore, it was most appropriate to present the Imperial Swan Egg to the Dowager Empress Maria Fedorovna on the occasion of her 40th wedding anniversary. The egg is made of opaque mauve enamel with a crystal encrusted trellis design. The surprise inside the egg is a swan which also holds a pendant. 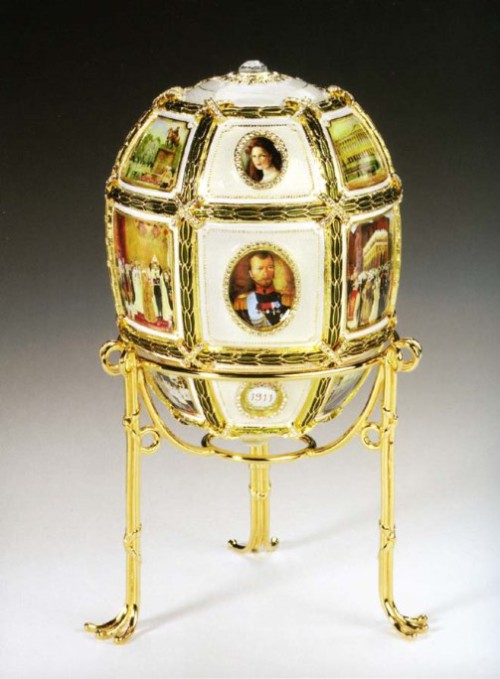 Imperial Fifteenth Anniversary Egg is the most personal of all the eggs created for Nicholas II and his wife, Alexandra Fedorovna, and one of the most exquisite Easter eggs produced by Faberge. Made to commemorate the 15th anniversary of Czar Nicholas’ ascension to the throne, the egg is set with 18 oval miniature panels painted by Vassilii Zulev of the Czar, the Empress Alexandra, and their four daughters. Additional rectangular miniatures depict the principal achievements of Nicholas II reign over fifteen years, and capture the principal events up to 1911. 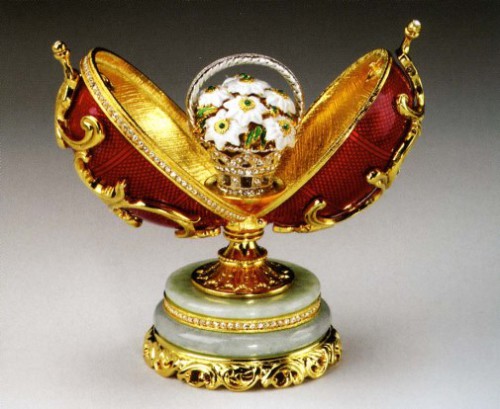 Imperial Spring Flowers Egg. In 1890 Czar Alexander III gave the original egg as a gift to his Mother the Empress Maria Fedorovna. This strawberry red enamel egg with a guilloche ground is laced with delicate neo-rococo 24k gold-plated scrolls and stands on a jade base. 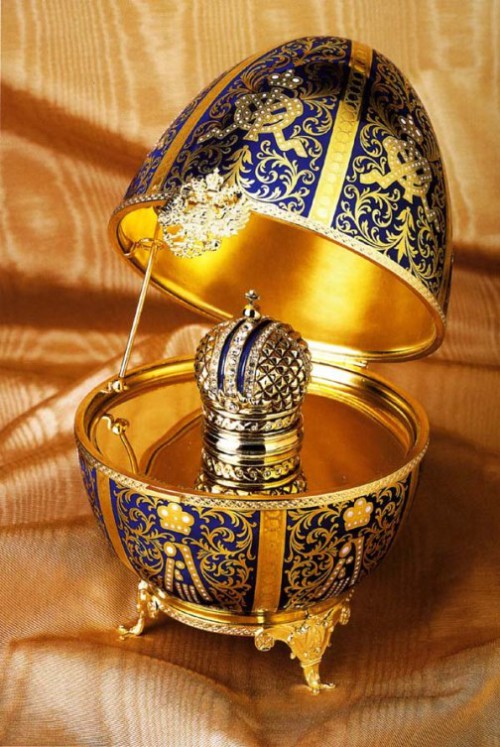 Imperial Twelve Monogram Egg. Though non-musical, this is one of the most spectacular Faberge Eggs. The Twelve Monogram Egg is a reproduction of a 1895 classic. It is hand-painted Limoges porcelain and the “surprise” inside is a 24k gold-plated crown. Hidden inside the crown is an enamel guilloches pendant. 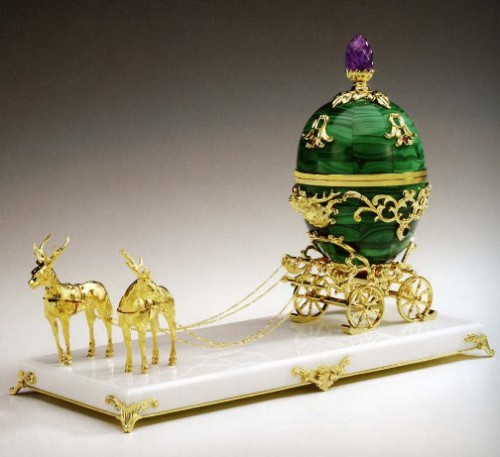 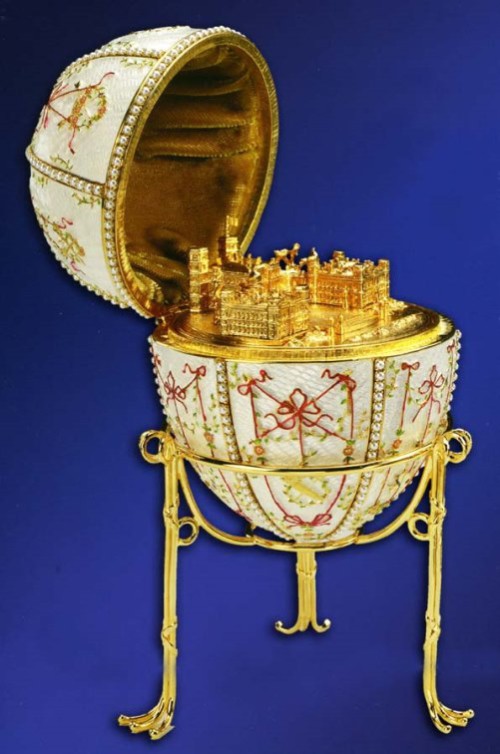 Imperial Gatchina Palace Egg ca. 1901. Regarded as one of Faberge’s best compositions, this superb, delicate egg, is enameled opalescent white, the shell engraved on a gold moire guilloche ground. It is divided vertically into six panels by strips of tiny seed pearls and horizontally at its hinged center. The sections are decorated with pink ribbon-tied swags and roses which hang classical motifs and symbols of the arts and sciences. When the egg is opened, a wonderfully rendered model of the Gatchina Palace, near St. Petersburg, is revealed. Under the model of the palace, a velvet-lined space conceals a beautiful surprise. The Gatchina Palace was the Dowager Empress Maria Fedorovna’s favorite winter residence. 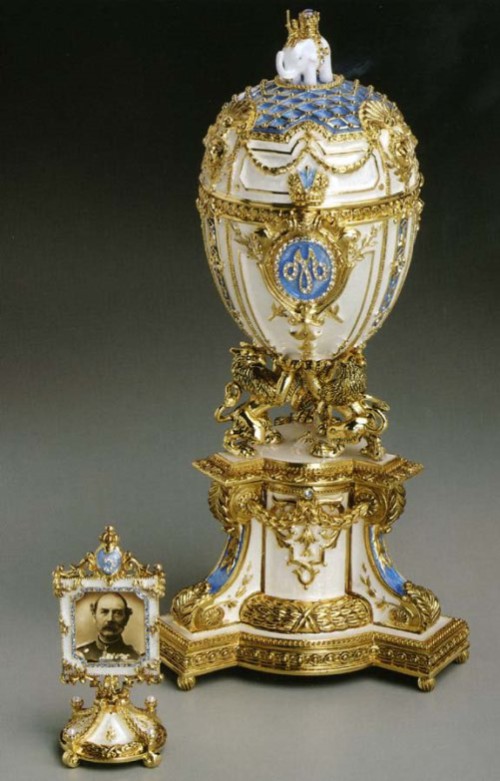 Imperial Danish Jubilee Egg ca. 1903. Empress Maria Fedorovna. The most important family event for the Empress in 1902 was her visit to Copenhagen for the 50th anniversary of the ascension of her father, King Christian IX, to the throne of Denmark. This golden jubilee event was commemorated in this egg. The outer surface of the egg is light blue and white enamel with ornaments in gold and hand-set Austrian crystals. The egg is surmounted by a Danish royal elephant and supported by three Danish Heraldic lions. The surprise inside is a miniature picture frame. 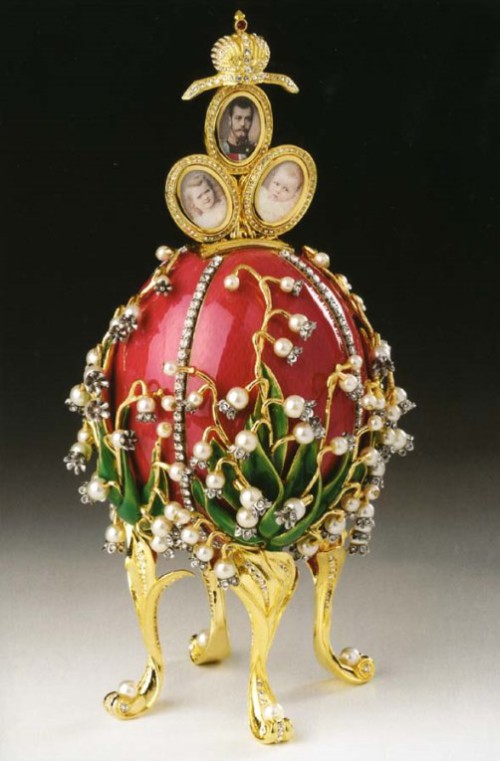 Imperial Lilies of the Valley Egg ca. 1898. Given by Czar Nicholas II to his wife, the Empress Alexandra Fedorovna in 1898, the Imperial Lilies of the Valley egg is one of three Art Nouveau eggs created by Faberge. This floral creation is a fantasy of nature. Green stalks and pearls scale the rose-colored guilloche enamel egg, their leaves realistically enameled translucent green. The surprise, three miniature photo frames, rise from the top of the egg. The frames contain photographs of Czar Nicholas II and his two eldest daughters, Grand Duchess Olga and Grand Duchess Tatiana. 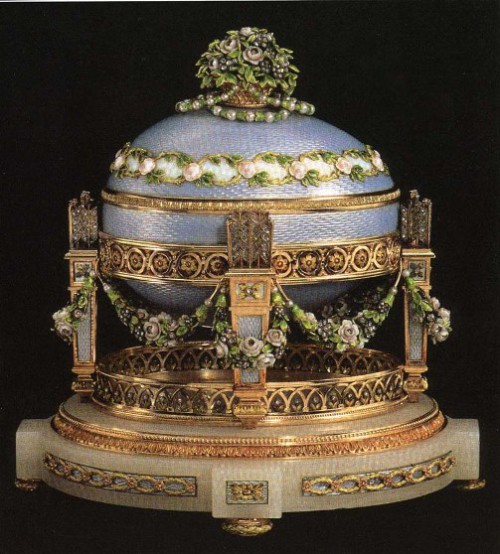 Imperial Cradle with Garland’s Egg ca. 1907. When Czar Nicholas II presented the delicate Rose Trellis Egg to his wife Empress Alexandra on Easter morning 1907, he also presented the Cradle with Garlands Egg to his Mother, the Dowager Empress Maria Fedorovna. The Cradle with Garlands Egg has also been called the Trophy Egg but the name Cradle with Garlands Egg is more fitting. It was a tradition that the appearance and contents of the Faberge Easter Eggs were adapted to events in the life of the Romanov family. Both the Rose Trellis Egg and the Cradle with Garlands Egg were commissioned to celebrate the birth of Czarevich Alexei Nikolaevich, son of Czar Nicholas II – the long awaited heir to the Romanov throne. The egg suggests a cradle decorated with garlands and the original surprise was the first portrait of the Czarevich in a medallion surrounded by diamonds. The egg, of an elegant pale blue enamel guilloche, is crafted in the Louis XVI style. The top is accented with a border of pink enamel roses, emerald green enameled vines and panels of oyster enamel. It sits in a crystal studded gold cradle that is supported by four columns depicting Cupid’s arrows set with crystals and is accented with a hanging garland of pink enameled roses. The whole is supported by a carved base accented with pink flowers on a blue enamel field and stands on four golden bun feet. A surprise of a jeweled medallion rests in the lined interior. 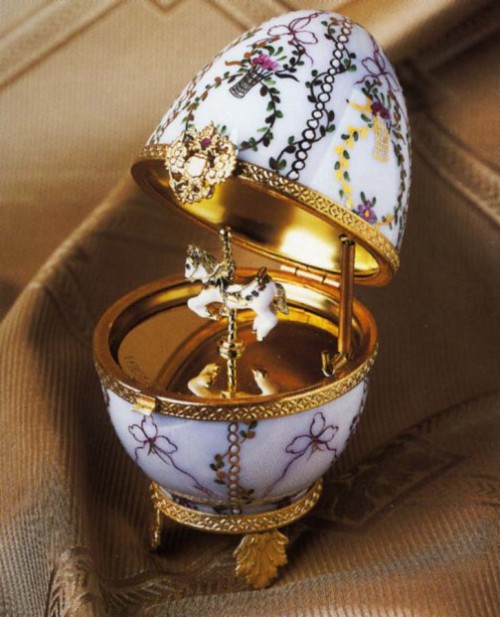 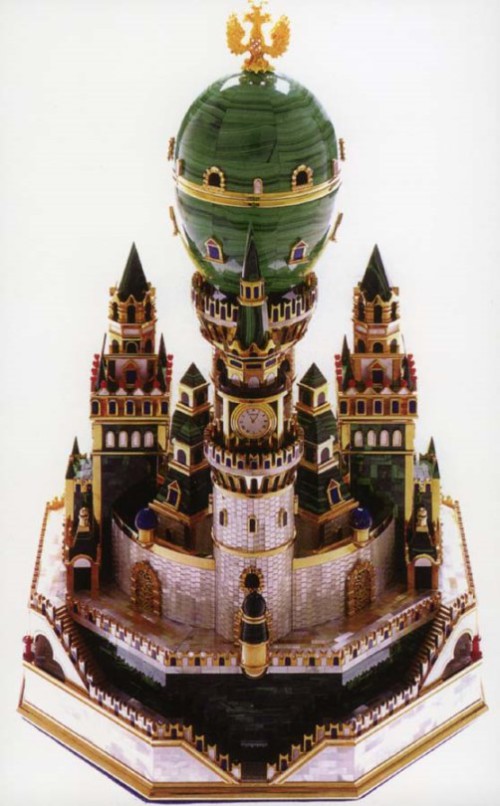 Moscow Kremlin Egg ca. 1906. Inspired by the architecture of the Uspenski Cathedral in the Kremlin where the Czars of Russia were crowned. The hand-carved malachite egg is topped with a diamond encrusted double-headed eagle (the symbol of Imperial Russia for more than 300 years). It opens to reveal a hand-carved Russian bear that rotates as a Swiss musical movement plays Tchaikovsky’s Swan Lake. Turrets, towers, and staircases rise from Kremlin walls made from more than 1,000 individually set pieces of mother-of-pearl, jade, onyx, lapis lazuli, coral, and red agate. Two of the towers are inset with Swiss clocks featuring 24k gold-plated sterling silver metal components. Made in St. Petersburg, Russia, in a limited edition of six. Each signed and numbered.