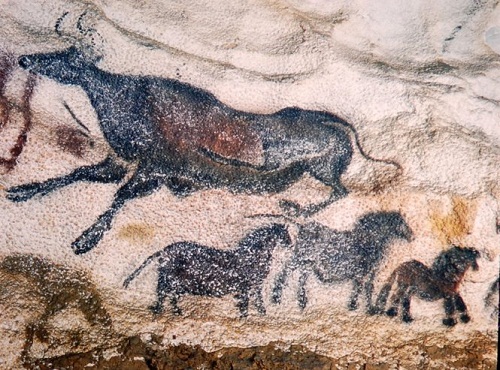 Lascaux Art from vanished people
I’ve come across an unbelievable story published by life.time.com, thought I might be not the only who didn’t know about this miracle. On September 12, 1940, in southwestern France, two schoolboys and their dog Robot excitedly chased a hare down a hole in the ground beside a downed tree. The boys began to dig, widening the hole, removing rocks, until they were able to follow their hound down — and found themselves not just in another world, but another time. In the cool dark beneath the known world, the boys discovered “Versailles of prehistory” — a vast series of caves, known today as Lascaux, covered with wall paintings close to 20,000 years old. 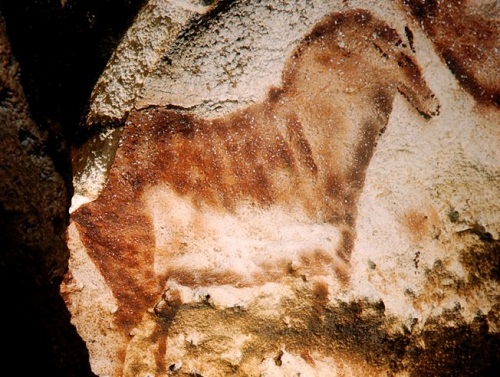 In 1947, LIFE magazine’s Ralph Morse went to Lascaux, becoming the first professional photographer to document the breathtaking paintings. Morse shared his memories of that time and place with LIFE.com, recalling what it was like to encounter the strikingly lifelike, gorgeous handwork of a long-vanished people: the Cro-Magnon. 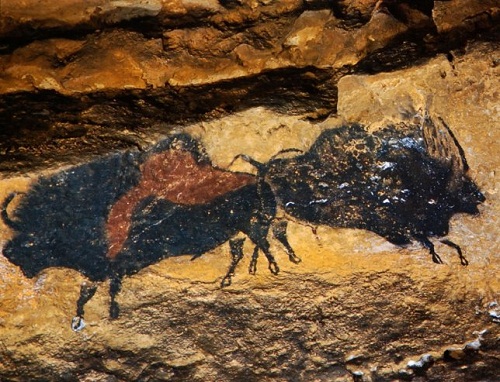 “One day we get a message from New York about some cave that people have been talking about. We do a little research, and find out that even though the cave was discovered a few years before, no one’s ever photographed the paintings. In fact, hardly anyone has ever been down there, except some guys who climb around in caves for fun. We know that the first thing we need is a generator to power our lights, but getting a generator anywhere after the war was almost impossible. We had to have people in London ship one over. Once it arrived, we were ready to go.

“The first sight of those paintings was simply unbelievable,” Morse said. “I was amazed at how the colors held up after thousands and thousands of years — like they were just painted the day before. Most people don’t realize how huge some of the paintings are. There are pictures of animals there that are ten, fifteen feet long, and more.”

The Cro-Magnon, in French “Abri de Cro-Magnon”, were evidently extremely intelligent and had a highly developed sense of beauty. The Cro-Magnon might well have inhabited the region for tens of thousands of years. Were the images at Lascaux painted by Cro-Magnon artists across scores of generations? Were they painted by hunters paying tribute to their prey? By shamans hoping to harness the brute power of the natural world? Theories abound; but in truth, no one knows.

“We were the first to haul in professional gear and bring those spectacular paintings to life. This little French town — they simply didn’t have the money, the equipment, the capability to do anything like this after the war. So we did it — and they helped out, because they were as excited as we were to really see what was down there.”

“Cro-Magnon man’s apparatus included engraving and scraping tools, a stone or bone palette and probably brushes made of bundled split reeds. He ground colored earth for his rich reds and yellows, used charred bone or soot black for his dark shading and made green from manganese oxide. These colors were mixed with fatty oils. For permanence, the finest pigments of civilized Europe have never rivaled these crude materials.”

In 1948, a year after Morse’s pioneering photographic work, Lascaux was opened to the public. But in 1963, the cave was closed after 15 short years when experts determined that carbon dioxide from the breath of thousands of visitors, as well as spores and other post-Ice Age contaminants tramped in from above ground, were damaging the paintings. Today, only a handful of people are allowed inside Lascaux for a few days each year to monitor damage (a mysterious, encroaching mold is the latest culprit) while they work to keep the magnificent paintings adorning the walls from going the way of their creators, and vanishing entirely.

Lascaux cave art center announced a competition among architects to create a secure museum in the caves. The winners became the U.S. Bureau of Casson Mann and Norwegians of Snohetta. Responsibilities between architects distributed as follows: while the Casson Mann team is engaged in external and internal views of the museum, Snohetta cares about the conditions for the safety of the exhibits. You will get a discreet, yet functional exterior, while the interior is truly amazing. Especially impressive the specific “cuts” in the ceiling of the cave, which allow sunlight to pass preventing moisture, and not destroying the structure of the picture.

In addition, the exhibition area inside Lascaux includes a cafe, reception and information center. Experts report that the cave of Lascaux will be re-opened to visitors in 2015, and its attendance will increase to 400,000 people a year. 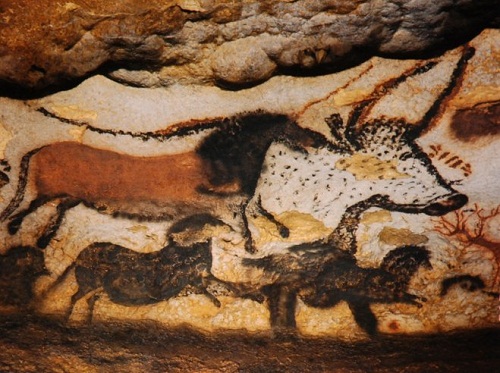 Realistic art created by a long-vanished people: the Cro-Magnon 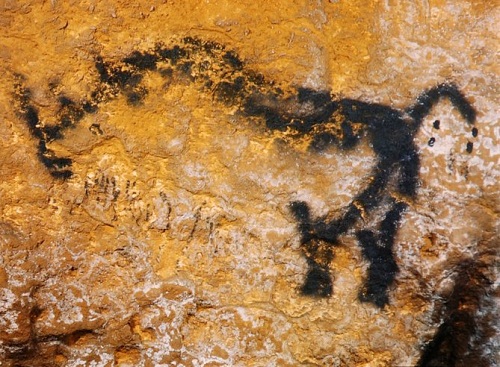 Closeup of a hand painted picture created by an unknown artist, representative of vanished people: the Cro-Magnon 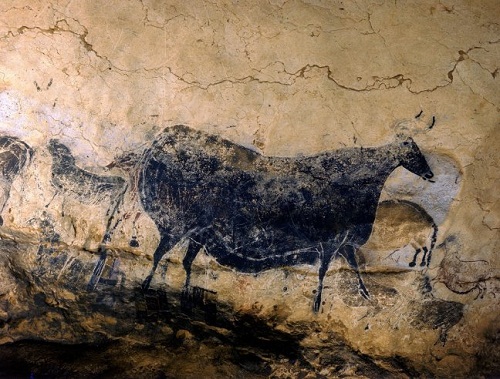 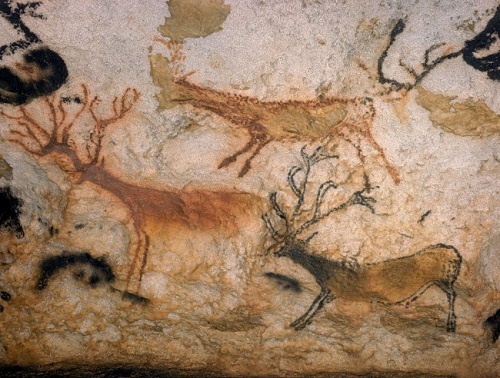 The scene of animal life, painted by an unknown Cro-Magnon artist 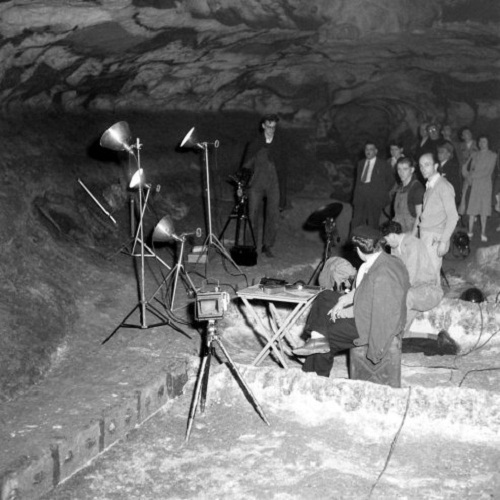 Researching work in the cave 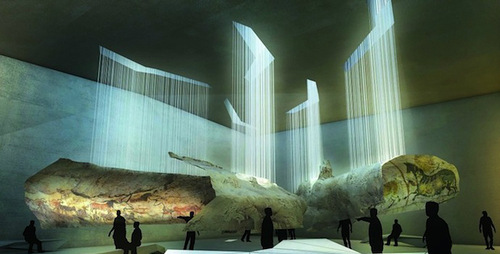 Strikingly lifelike, gorgeous handwork of a long-vanished people: the Cro-Magnon 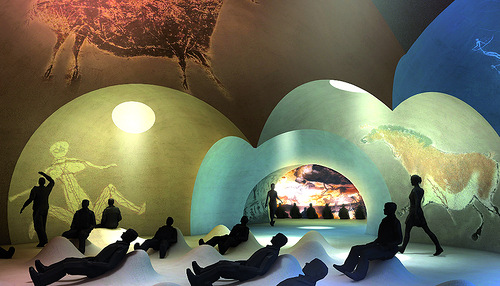 The beautiful interior of the Cave arch 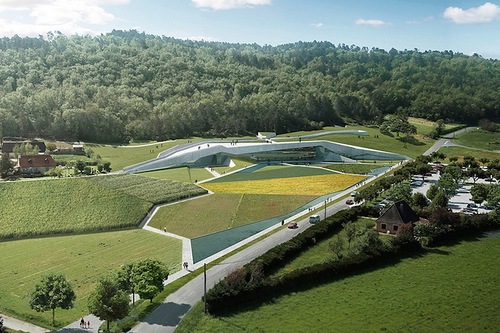 The view of Lascaux Cave arch