« Little-known photographs of Nirvana
Casey Anderson and Brutus the bear » 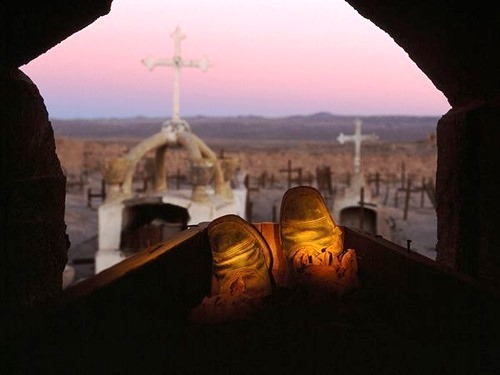 World’s Most mysterious crypts
A selection of such crypts and graves found in different parts of the world, the mystery of still remains unsolved. For example, Corpses in shoes is in Chile. In the Chilean Atacama desert there is a saying “here you’re dying, here you’re drying”. The corpses left by looters for all to see, quickly dried up in the Sun. In the cemetery of Puelma, open coffins are simply everywhere, and the bodies inside – still laced in their shoes. Photograph by Joel Sartore. 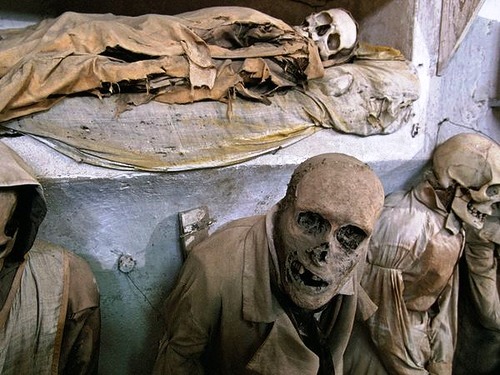 Mummies of Capuchin in Italy. The monks of the Capuchin monastery discovered naturally mummificated priests, buried in the catacombs, this discovery happened more than 400 years ago, in Palermo. The news spread rapidly, and authorities allowed ordinary citizens to be buried the same way in the same place. Now, you can see thousands of corpses, most of whom wore battered remnants of beautiful robes, exhibited now in the narrow halls of the dark Museum. 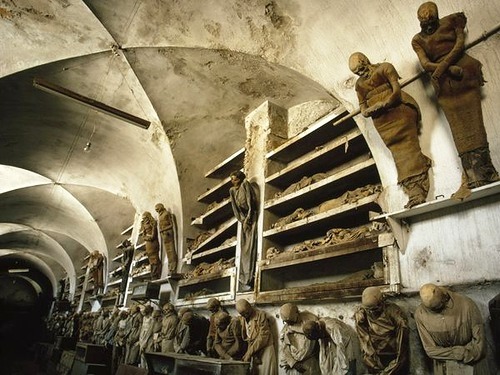 About 8000 mummies in the Capuchin catacombs in Palermo are exhibited in the halls, according to their earthly status: male or female, priest or worker, child or adult. There’s also a chamber for virgins. The Italian Government banned the mummification in 1881, but an exception was made in 1920, for 2-year-old Rosalia Lombardo, whose beautifully preserved body here is called “sleeping beauty”. 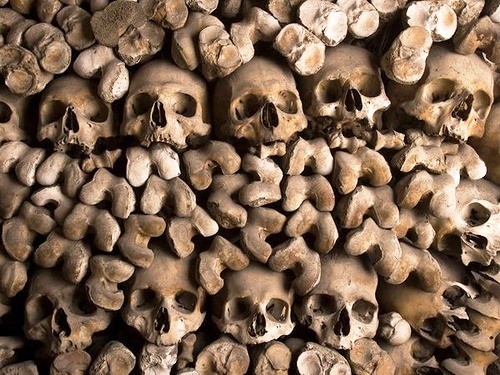 Roman catacombs. Skulls and bones of about 4000 Capuchin monks, some of whom died almost five centuries ago, decorate the six-room crypt under the Church of Santa Maria Dela Concezione in Rome. It’s more than just the burial chamber. The Padres have the remains of their brothers in a whimsical manner, mortally-dark chandeliers, arched hallways and wall decorations. 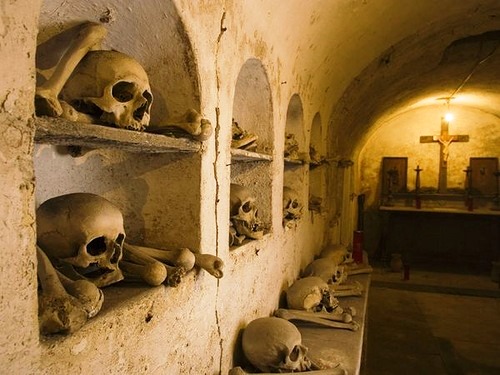 Bones of Crypt, Rome. Carefully arranged bones are located in the crypt under the Church at Rome. Funerary chambers beneath the eternal city became home to tens of thousands of deaths. 16th century Church of Santa Maria Dela Orazione e Mort used its catacombs, to ensure a dignified burial of poor residents, for the three-century period a total of 8000 bodies were buried. Photograph by Stephen Alvarez 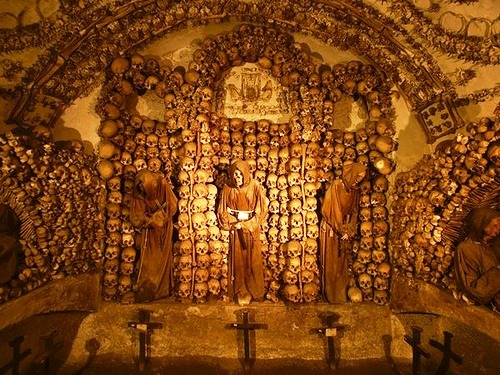 Crypt, Rome. Reverence for the dead – as well as a reminder of the transience of the living. These dark designs assembled from bones of 4000 dead Capuchin friars. Photograph by Stephen Alvarez 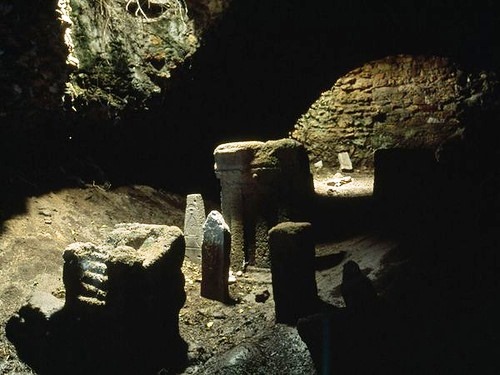 Phoenician Tophet, Tunisia. They say that the Phoenicians regularly sacrificed infants to please their gods. These ritual murders and burials took place at stone shrines called tophet. Discovered in the ruins of the tophet of Carthage in Tunisia. Photograph by Robert Clark 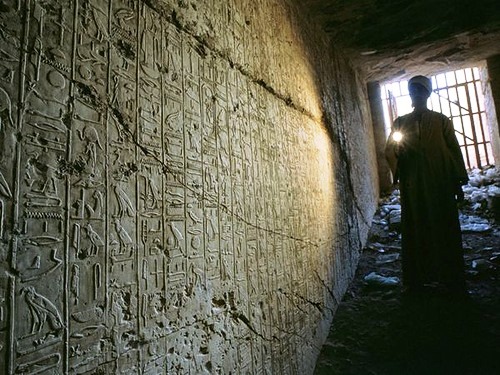 The walls of Tomb of Ramses II as well as the Egyptian pharaohs often covered with hieroglyphics. In fact, they gave instructions on how to go to the King, avoiding many of the pitfalls that could await in the road between hell and paradise. Here, human Lantern illuminates the wall murals in the tomb of Ramses II. Photograph by O. Louis Mazzatenta 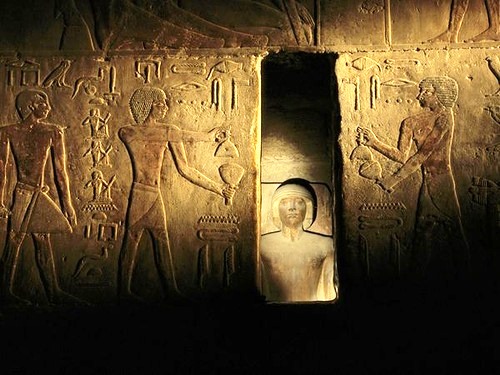 The statue of Pharaoh

As Egyptian pharaohs marshaled their exquisitely decorated the graves of deadly curses, to discourage possible base destroyer. Pharaoh Ti went even further. He ordered his statue to be immured in a special cell. The statue of Pharaoh. Photograph by Kenneth Garrett 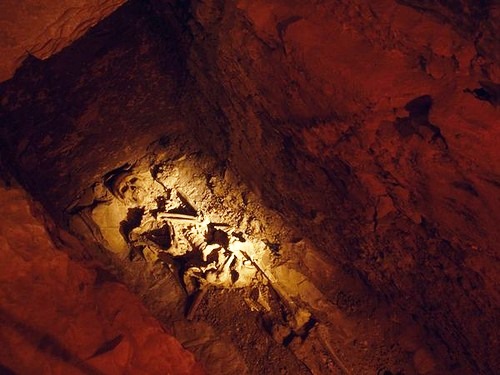 Skeleton in the Egyptian tomb

Cluster of tombs in Egypt, known as KV5, built to hold the remains of the sons of Pharaoh Ramses II. Located in the Valley of the Kings, Skeleton in the Egyptian tomb contains more than 120 Chambers and corridors. Besides, the largest burial room of this valley. And this is perhaps one of the sons of Ramses. 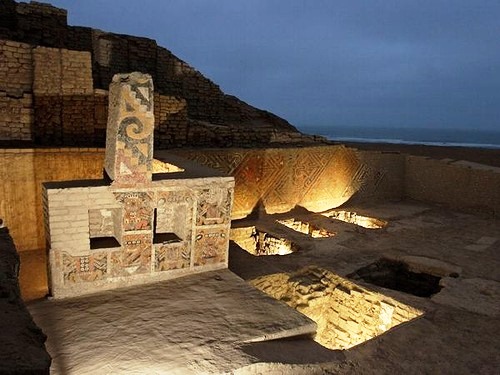 Archaeologists discovered El Brujo – a tomb of carefully wrapped, tattooed woman on top of El Brujo. The find took place in ceremonial Temple Mocha civilization in the north-western part of Peru. Some experts suggest that such a burial – 1600 year old mummy indicates that the woman had a special position and most likely was the Queen of warriors.