« Kevin Richardson the lion whisper
Loneliness in the net 2006 film » 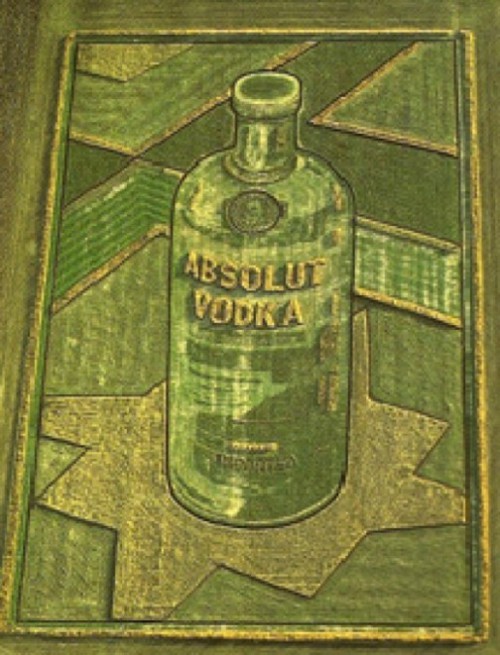 Representational crop art by Stan Herd
Born into a family of a Kansas farmer, American Crop artist Stan Herd graduated from Wichita State University. He is famous for his crop art – a method of creating images by digging, disking, plowing and otherwise manipulating acres of green space. Meanwhile, the themes of his land art – people, landscapes and brands. World famous, Stan Herd is the preeminent representational earthworks artist. In fact, Herd has created his beautiful earthworks projects around the world. And in particular, in England, Cuba, Australia and the United States. 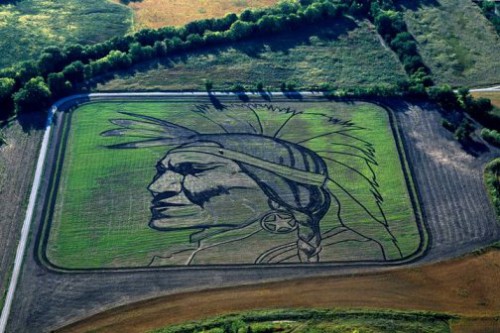 The ‘Saginaw Grant Portrait‘, created to bring attention to issues of importance to Indian activists seeking redress from the loss of tribal sovereignty and poverty on many reservations. The portrait inspired after seeing Saginaw Grant dance at the Haskell University Spring Pow Wow. The earthwork created on thirty-acres from wheat stubble on a farm north of Lawrence, KS in 1988. Used a mower, a disc, and a two-bladed tractor ‘like different pencils’ to give the image its complexity. Photo by Jon Blumb 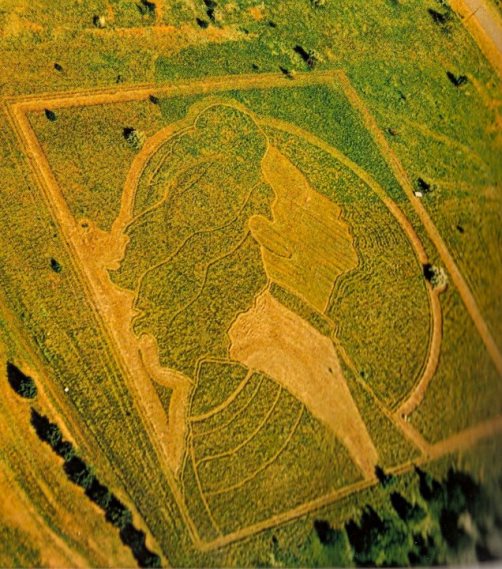 Little Girl in the Wind

‘Little Girl in the Wind’ – a four-acre earthwork created near Salina, Kansas and Stan’s first attempt at creating an earthwork without plowing the ground. Instead, the ground was burned, mowed and hand planted with native plants. The portrait is of subject, Carole Cadue, a Kansas Kickapoo woman and the first in a planned series of portraits of indigenous women in their homelands. 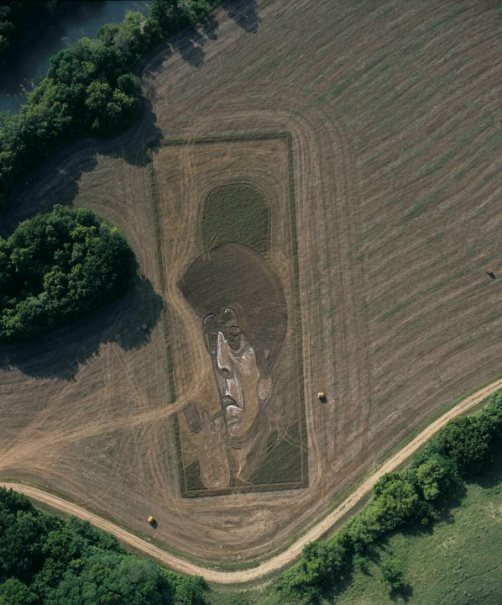 Aldo Leopold. In collaboration with the Land Institute in Salina, Kan., to help promote the Summer Prairie Festival in 1998. Stan created a portrait of America’s great conservationist, Aldo Leopold. An environmentalist whose early insight led to the concept of using ‘nature as measure’. In particular, letting the prairie set the standard for an effort to make agriculture mimic the native prairie. In fact, a natural system agriculture. The portrait created in a meek and drought-ridden stand of alfalfa near an overlook on the edge of the farmstead. Eugene Friesen, cellist with the Paul Winter Consort serenaded the gathered crowd with a ‘grasslands’ musical’ offering an accompaniment of readings by Leopold’s children of their father’s writing.
Photo by Jon Blumb

“Earthwork”, award-winning film at more than 50 film festivals in the United States alone and filmed on location in Lawrence and New York City. It tells the true story of Herd’s transformation of a large, trash-strewn, barren lot near a graffiti-laced underground railway tunnel. Meanwhile, inhabited with the homeless into his work entitled Countryside. 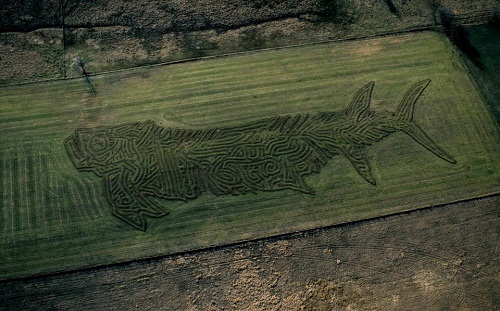 The Xiphactinus Maze, created to represent the 15-20 foot long predatory bony fish that would have lived in the Western Interior Sea (i.e. Kansas) 3 million years ago 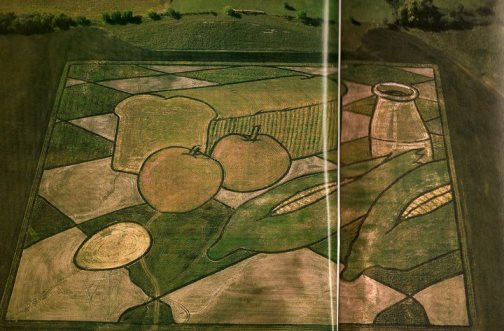 ‘The Harvest’. Influenced by the still life of Cezanne. The image created near Lincoln, Nebraska to coincide with the Farm Aid Concert in 1987. Planted with wheat, corn, and field grains 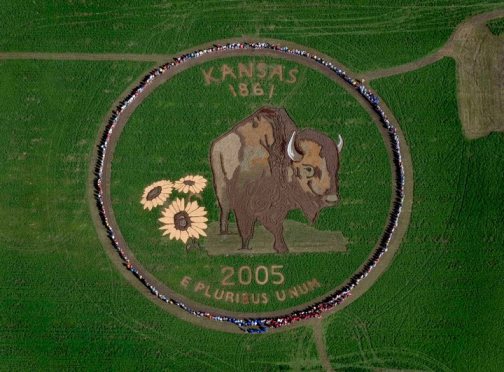 The Kansas state animal, the American buffalo (bison), and flower, the sunflower, highlighted as symbols of Kansas. 2005 (Photo by Jon Blumb) 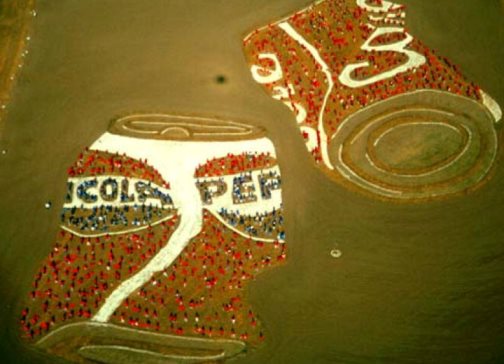 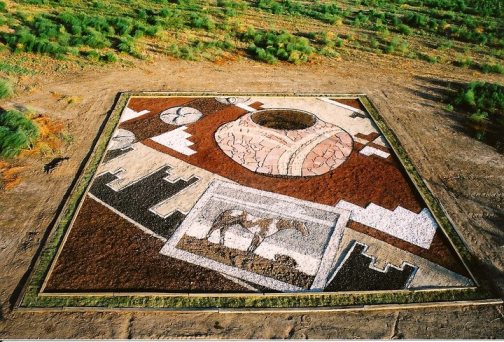 Art by the Half-Acre. Neiman Marcus commissioned Stan to create a half-acre earthwork as part of its 2003 Christmas Book 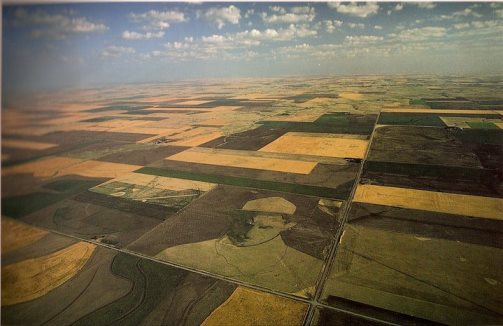 The 160-acre Will Rogers portrait became a lesson in forbearance. An intense summer drought muted the image and curtailed the efforts to plant grain crops for a more colorful portrait. Photo by Peter B. Kaplan 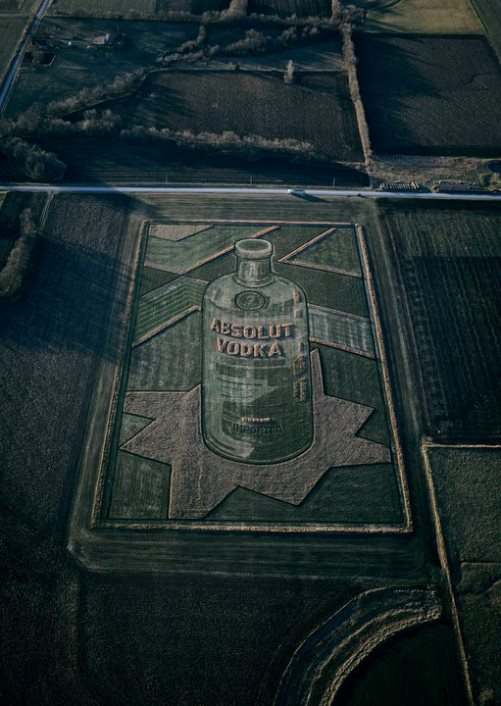 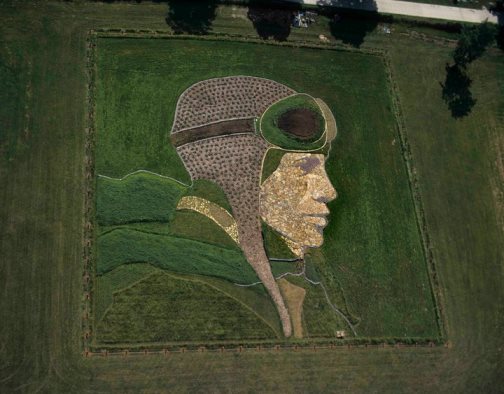 The one-acre landscape mural of Amelia Earhart, created to celebrate her 100th birthday on July 24, 1997, in Atchison, Kansas. This earthwork is a permanent piece composed of plantings, stone, and other native materials. Photo by Jon Blumb

Half-Acre. Neiman Marcus commissioned Stan to create a half-acre earthwork as part of its 2003 Christmas Book 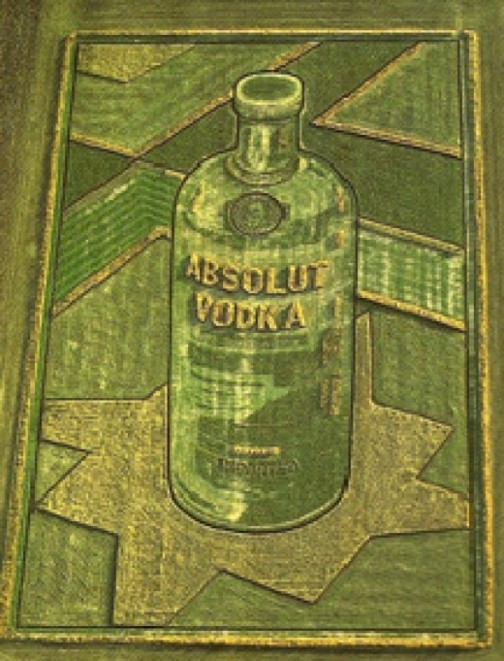 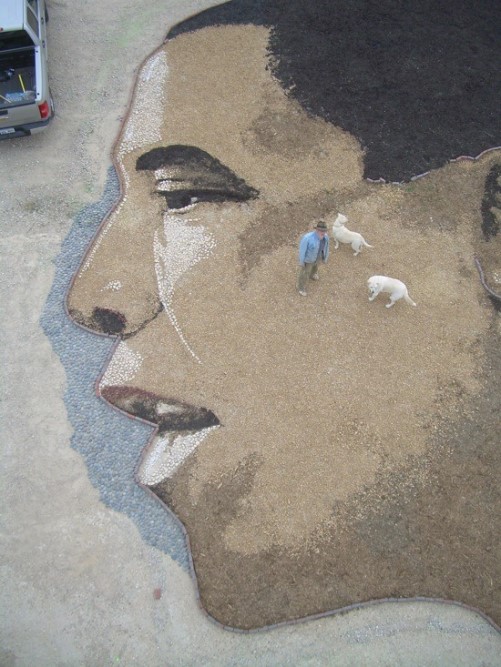 Two dogs and an artist standing on a huge portrait 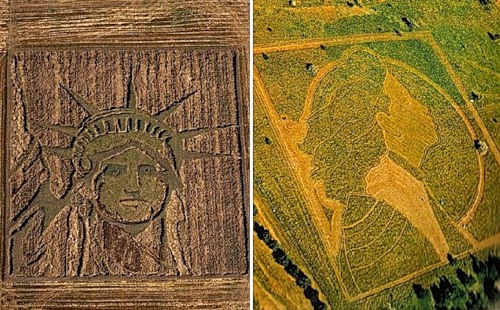 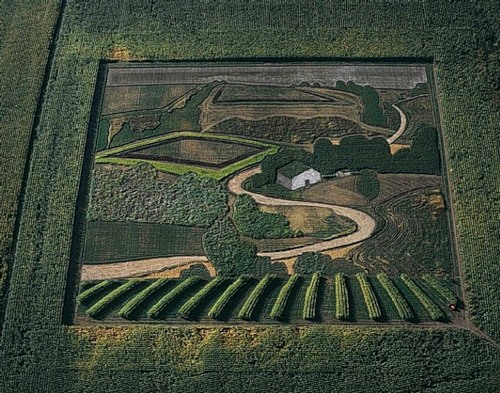 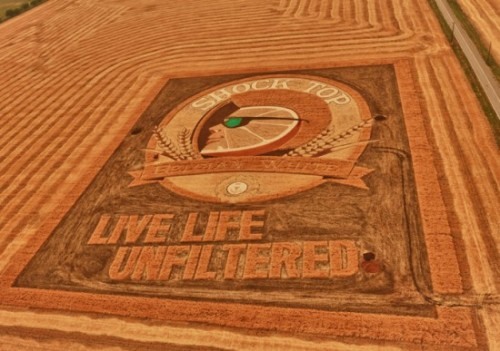 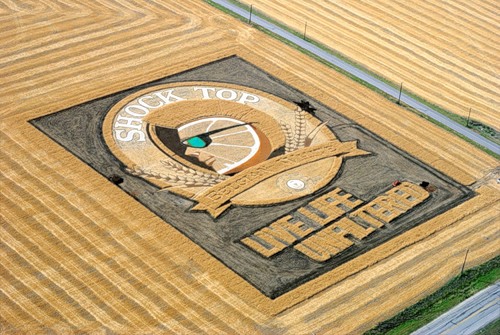 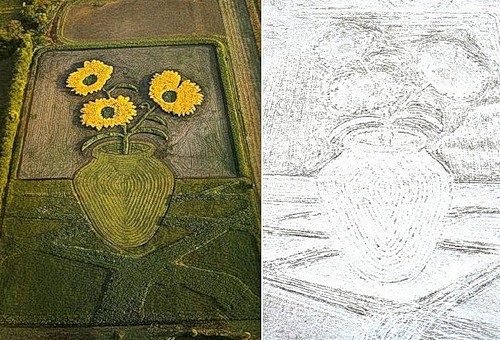 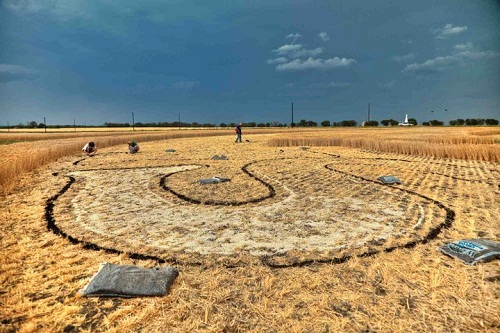 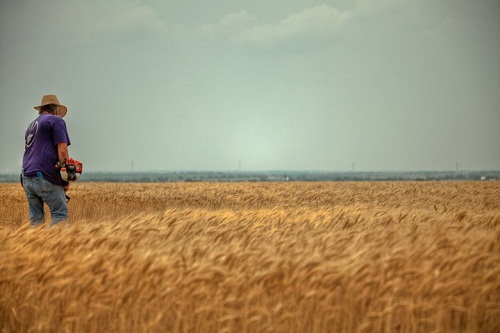 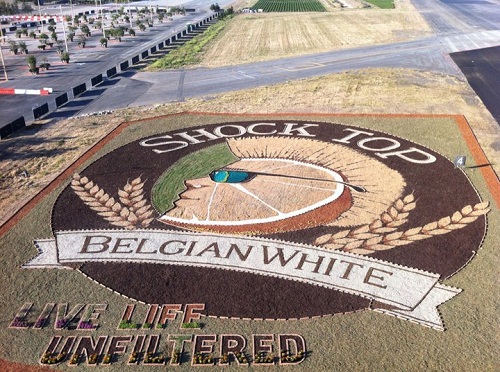 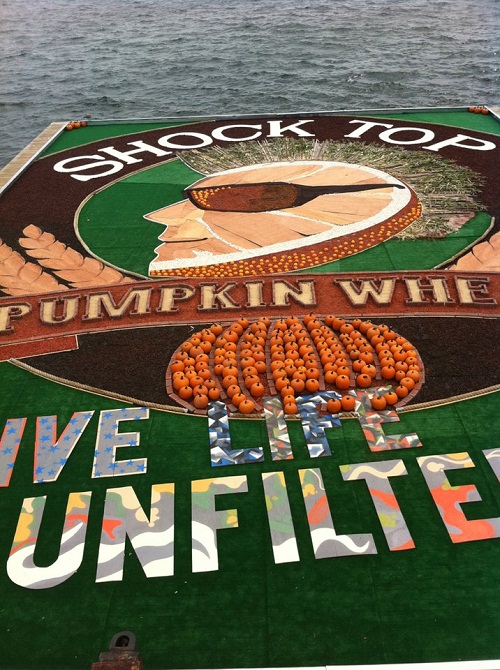 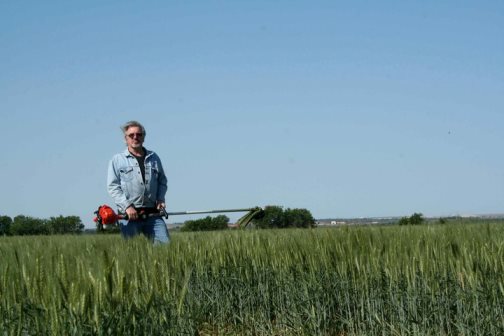 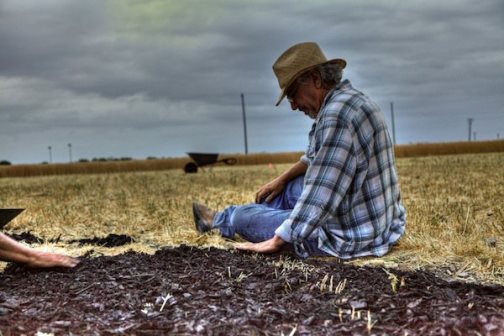 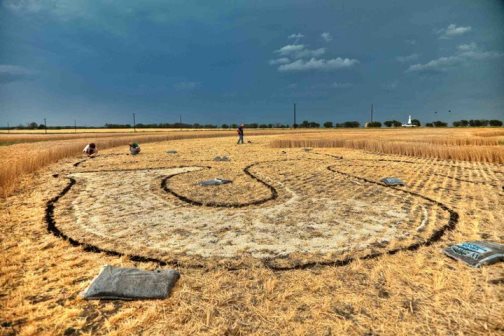