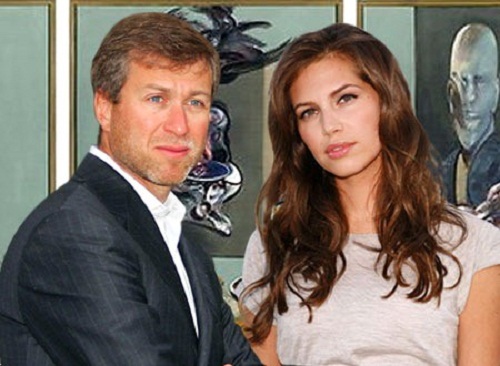 Russian billionaires most expensive art, according to forbes.ru. Many masterpieces of world art gain new owners at auctions or through private transactions. They often disappear from sight for years. In Russia this question is particularly acute: about their purchases often even the owners of absolutely legitimate billion business prefer not to tell, not to mention the huge number of private buyers of antiques. But most of the major collections sooner or later come to light. Sometimes rich owners decide it’s time to show them to the world, sometimes against their will. About the collection of paintings of Russian tycoon Dmitry Rybolovlev became known only thanks to his ongoing divorce with his wife, who claimed about her rights on part of his treasures. 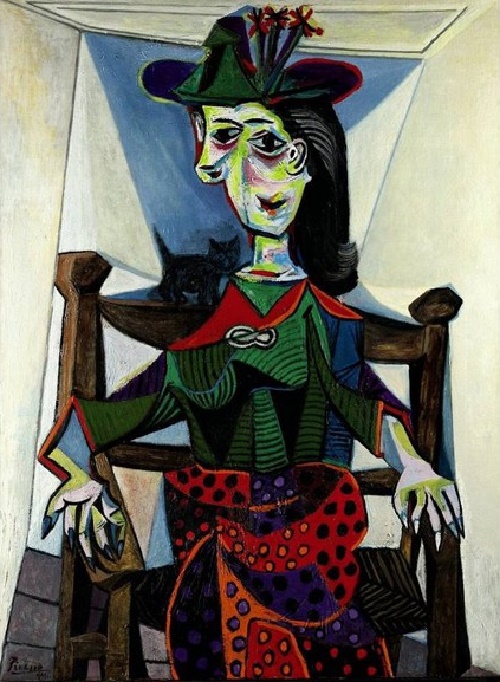 Russian billionaires most expensive art. Pablo Picasso. Dora Maar with cat, 1941. Sold at Sotheby’s in 2006 for $95,2 million. Belongs to the founder of the Russian Credit Bank and ‘Metalloinvest’ Boris Ivanishvili

Pablo Picasso. Dora Maar with cat, 1941. Sold at Sotheby’s in 2006 for $95,2 million. The most expensive piece of art of this top belongs to the person who has formally ceased to be the Russian billionaire. The founder of the Russian Credit Bank and «Metalloinvest» Boris Ivanishvili seriously interested in collecting works of art. Perhaps initially buying fine art was for him only one of many ways to invest money, but in time it became a serious hobby. Ivanishvili’s favorite style of buying is incognito, alone or through a very narrow circle of trusted people. It is known that he loves painting of XIX – 20th century, including impressionism and abstract art. The full extent of the collection is not known, but experts suggest that it values $ 1 billion. 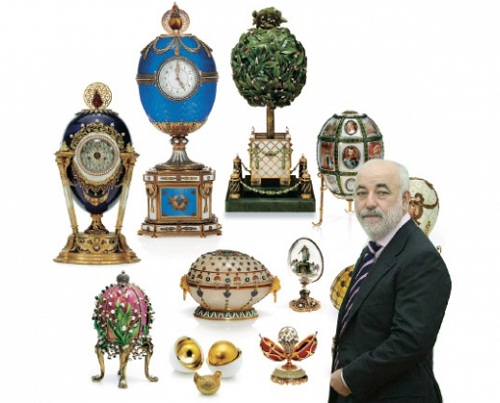 Faberge Easter eggs, private sale at auction Sotheby’s in 2004. The amount of the deal was estimated at $ 130 – 250million. Viktor Vekselberg began collecting art in 1990, starting with Russian painting. These were very expensive masterpieces paintings by Ivan Aivazovsky, Isaac Levitan, Konstantin Korovin and many other classics. In 2004, Vekselberg bought collection of Faberge 215 objects, including 9 famous Imperial Easter eggs. In subsequent years, the businessman continued to buy the company’s products, having spent only about $ 350 million. Today his collection includes about 700 objects, and is the largest private collection of Faberge in the world. Vekselberg pledged in the coming years to exhibit his collection in two museums in Moscow and St. Petersburg. The total value of the collection is estimated at $ 800 million. 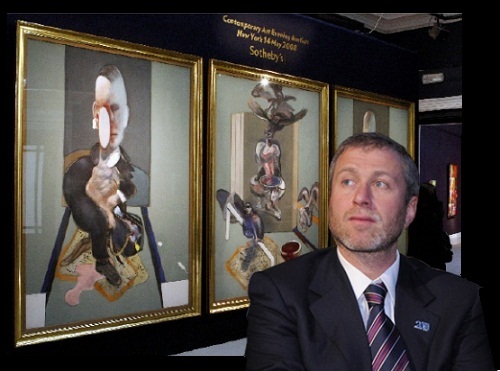 Francis Bacon. Triptych, 1976. Sold at Sotheby’s in 2008 for $86,3 million. The former owner of Sibneft, the Chelsea Club owner and holder of the world’s longest yachts Roman Abramovich almost never tells about his purchases. When in the mid 2000’s Abramovich began regularly appear in galleries and art fairs, appeared also new auction records, including those sold for $ 100 million for work by Pablo Picasso and Alberto Giacometti. The businessman actually started buying art objects back in the 1990’s, and his collection is large and diverse — for example, there are paintings of the XVII-XVIII centuries. Its market value is up to $ 1 billion. 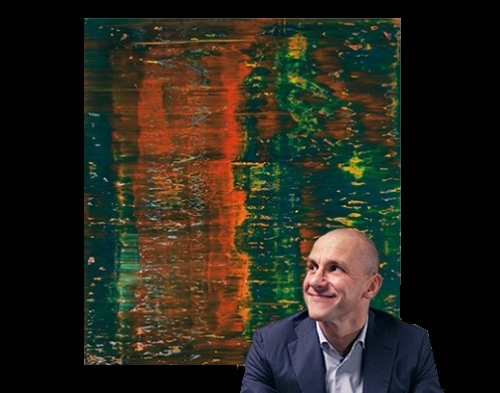 Gerhard Richter. Abstract painting 745-2, 1991. Assessed value of $30 -35 million. The owner of the Group Energy Standard Konstantin Grigorishin got hooked on collecting art in the early 1990’s. Starting with the avant-garde and Russian classics, Grigorishin then began buying Western art. Today works from his collection are regularly exhibited in leading museums, and insurance cost is $ 300 million 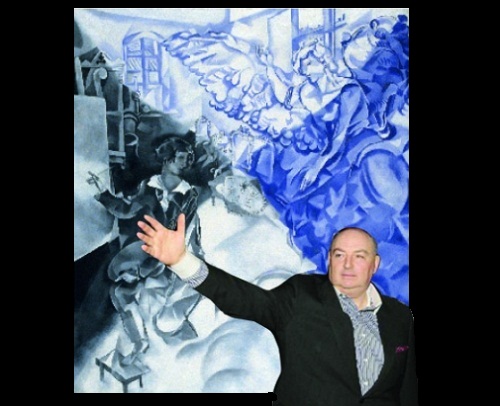 Marc Chagall. Vision. Self-portrait with Muse. 1917-1918. Assessed value of $ 30-35 million. The owner of chemical company” Akron”, head of the European Jewish Congress Viatcheslav Kantor has the outstanding collection of about 400 works by 33 Russian avant-garde artists – Chaim Soutine, Sonia Delaunay, Ilya Kabakov, Erik Bulatov. But the gem of the collection is the work of Valentin Serov “Rape of Europa”, the author’s version of the paintings exhibited in the Tretyakov Gallery, Cantor was able to buy in the early 2000 ‘s, from the heirs of the artist for only $ 1 million. Its market value today multiply at least 10 times. The total value of the collection is estimated at $ 150 – 200 million. 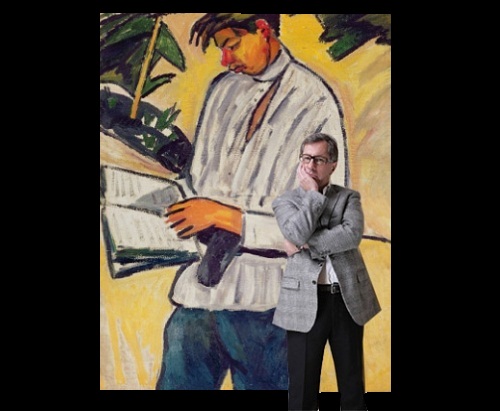 Mikhail Larionov. Portrait of Velimir Khlebnikov, 1910
Assessed value of $20-25 million. Peter Aven is always the first name that is referred to gallery owners and dealers, replying to a question on the largest Russian collectors. His collection of Russian art is considered to be the most complete, and of high-quality. Aven was actually the only one who was buying Russian art of the late 19th and early 20th century, systematically and on a large scale. In his collection the most complete meeting of leading art associations of that time — “Jack of diamonds”, “Blue Roses”, “world of art”. In his collection there are outstanding works of Serov, Korovin, Petrov-Vodkin, Goncharova. Peter Aven believes the most valuable painting – portrait of Velimir Khlebnikov by Mikhail Larionov. The entire collection is estimated at $ 500 million. 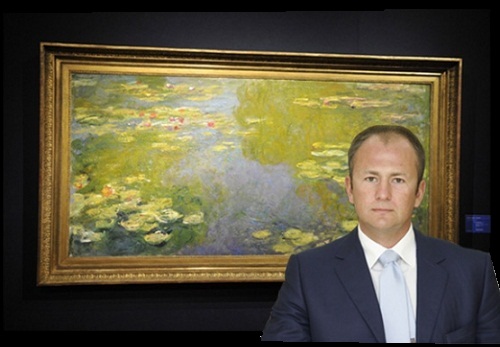 Claude Monet. Pond with water lilies. Sold at Chrisite’s in 2008 for $80,5 million. The owner Andrey Melnichenko

Claude Monet. Pond with water lilies. Sold at Chrisite’s in 2008 for $80,5 million. The owner of this work cannot be named with 100% certainty. There are only rumors, but very persistent, that he is the co-owner of “Eurochem” Andrey Melnichenko. Very little is known about the collection itself, they say that it is very extensive and its owner adores impressionism.