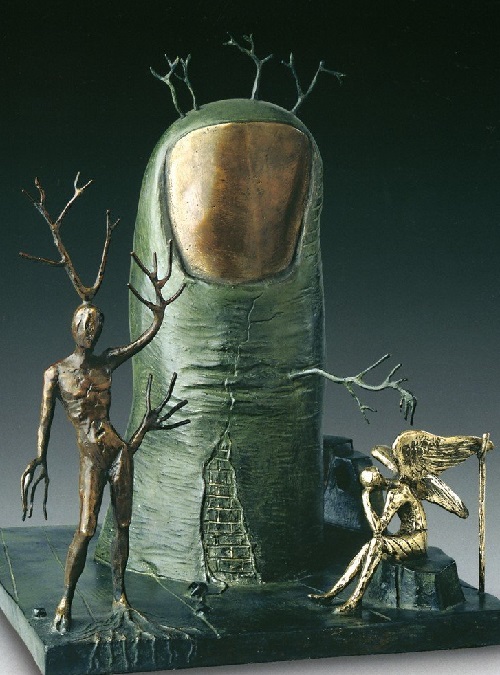 Vision of an angel, or “Finger of God”. Salvador Dali bronze sculpture

Salvador Dali bronze sculpture. Within a few years, from 1969 to 1972, Dali has created a gallery of surreal images embodied in wax. Most of them are familiar to the audience – the artist used in creating sculptures the same images that appear on his canvases. Almost all the sculptures were created in the house of Dali in Port Ligate. According to the stories of Dali biographer, Robert Descharnes, in the afternoons artist used to take the wax out to the pool, and for several hours engaged in modeling, and after dinner returned to the studio for painting. In 1973, Dali made ​​a pact with the Spanish collector Isidro Clot. Clot acquired wax sculptures and designed of them four series of castings in bronze. First of bronze castings remained at a collector’s, the rest were sold and dispersed around the world. 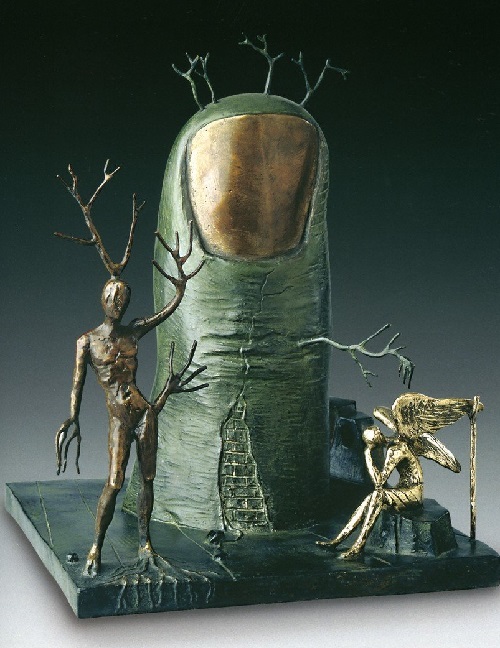 “Vision of an angel” is dedicated to the unity of man and God. Image of the Creator is presented in this mystical sculpture of right thumb, from which comes all things (like the branches of a tree trunk). “Finger of God” – a symbol of the divine will, also evokes the tower too … Man created by God tends to resemble the Creator, but God is all-powerful and the person will never be able to beat him, what-would knowledge he had. Human figure resembling a tree which branches rush to the heavens, and the roots firmly tied to the land, dual displays the essence of man. Angel figurine aside sadly reflects the duality of human nature and the futility of human endeavor that emphasizes crutch behind Angel 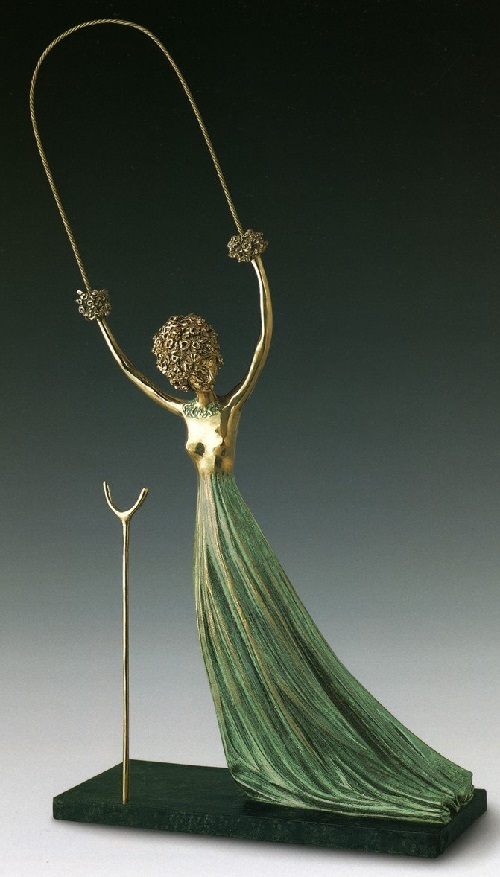 Alice in Wonderland – one of the favorite art images of Dali. This eternal girl with her childish naivety and sincerity explains the confusion of the surrealist world. Meeting with the inhabitants of this world does not bring her harm and she comes back out with the same clear childish worldview. Rope – interwoven cord of intricacies of fiction and reality. Alice’s hands and hair turned into roses, the symbol of burgeoning womanhood 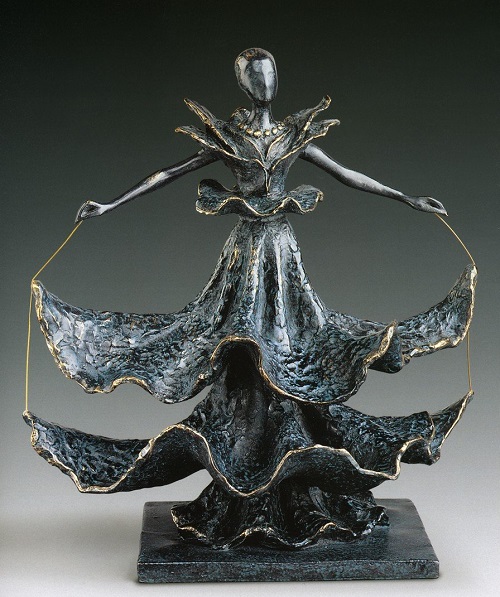 Dali always admired the art of dance. Especially close to him was the spirit of Spanish flamenco, famous rich in possibilities of worthy expression of dominant human emotions. Dali’s dancer moves in a rapid pace. She is full of dance energy. Her image – an image of materialized passion. Higher and higher surge folds of swirling skirts, turning into wings. In this dance lies the magic power that raises man above reality. 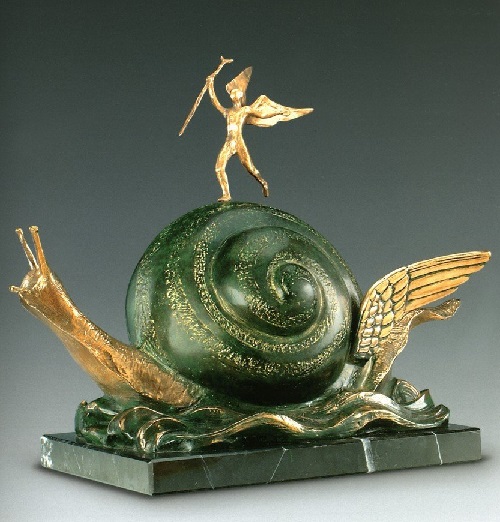 The Snail and the Angel. Salvador Dali bronze sculpture

The Snail and the Angel. It is well known that the snail was one of the fetishes of Dali. Symbolic image of snail is polysemous. This combination of tender flesh and stiff dead shells. It is a fusion of masculine and feminine in one being (terrestrial snails – hermaphrodites). It is the perfect harmony of love relationships, because when two snails mating, each implements its both sexual advance. Snail shell – symbol of frozen time, spiral shell symbolizes infinity. This sculpture of the snail symbolizes slow flow of time. Swift angel appeared to give the gift of unlimited speed to snail. But before the time even he is powerless, as evidenced by a crutch – a symbol of weakness. 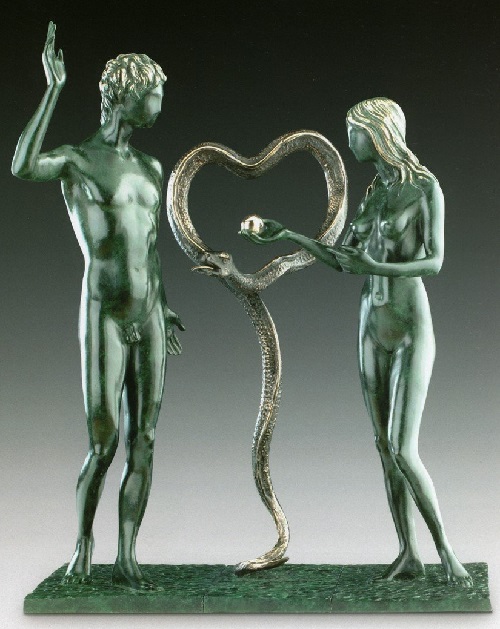 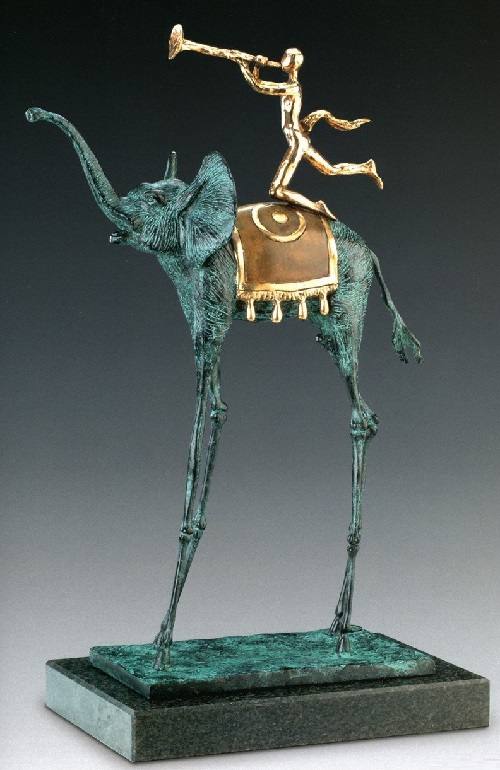 In iconography by Dali elephant is a symbol of the Future. Powerful body depicted on thin legs, which can be interpreted as a contrast between the firmness of the Past and Present fragility. Precious saddle symbolizes wealth. Soaring angel trumpets, heralding the arrival of the era of success and prosperity. This amazing sculpture embodies the hope of man on personal happiness and good fortune. 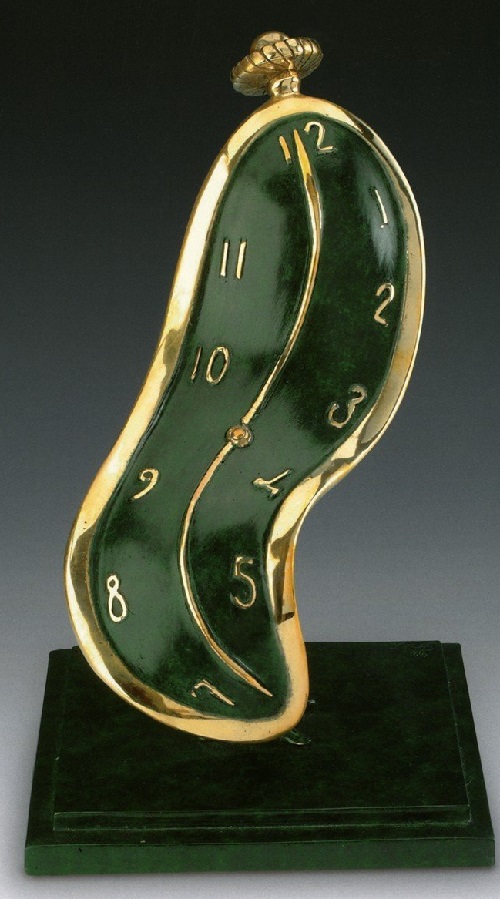 Dance of time I

Melting watches are the most recognizable and beloved by public iconographic way of surrealistic world of Dali. But time in this sculpture is not just amorphous – it dances to the rhythm of vibrations of the universe. The usual concept of time invented by man and so is his service, helping to streamline the moments of human life. Dali time is another time. It is free from the limitations of rational and non-stop dancing, indifferent to the needs of people, their history, and even outer space. Dancing time image captured in three different forms: Dance of Time I, II and III. Perhaps it’s past, present and future: danced, dancing, and will dance 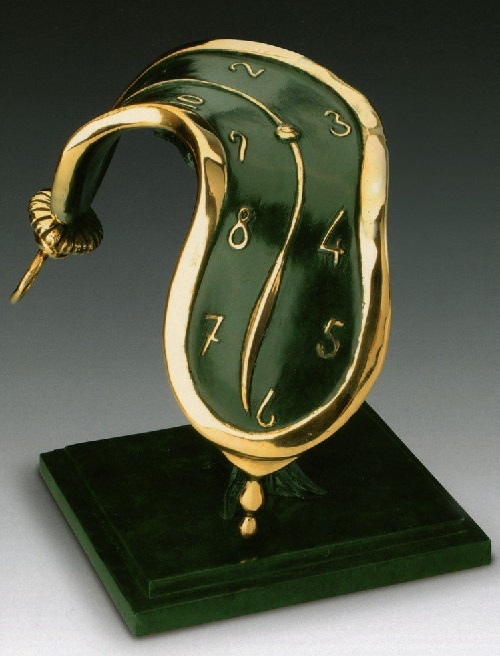 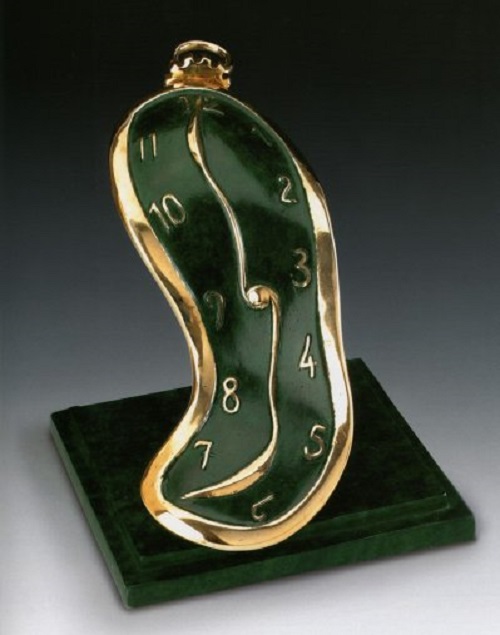 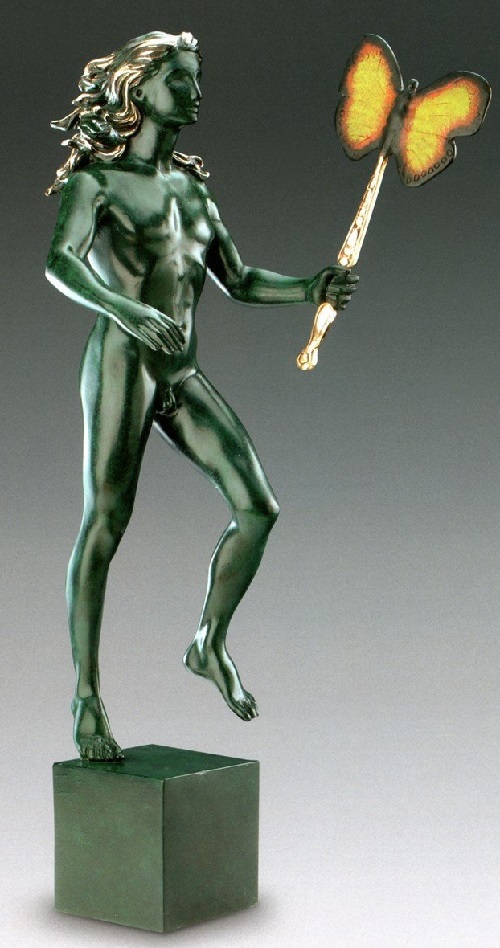 This elegant sculpture was originally conceived as part of the famous Dali series of tarot cards, which was created specifically for Gala, the artist’s wife and muse. The hero leaves the world of everyday banality for the world of illusive butterfly. Fragile butterfly wings give him will to fly to another reality, where he can throw off the usual daily concerns and constraints 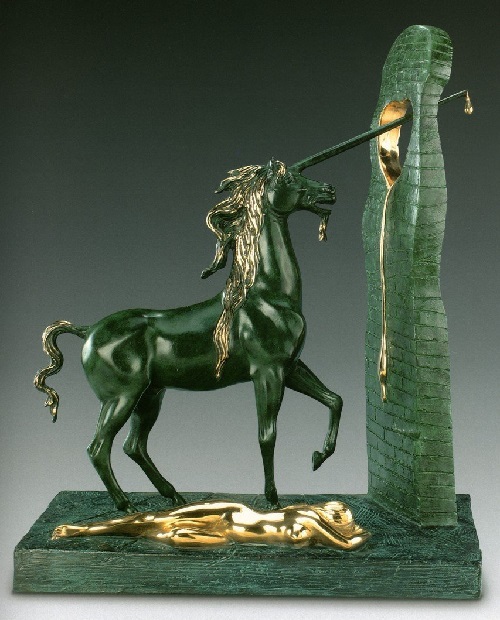 Mythical Unicorn in ancient times was a symbol of perfect purity. It was believed that its horn has magical powers and can save from any poison. However, in this piquant sculpture unicorn symbolizes attainment of manhood. Horn he pierces live symbolic barrier, squeezing it in a hole in the shape of a heart. Nearby lies a beautiful naked woman had just defeated the mythical beast 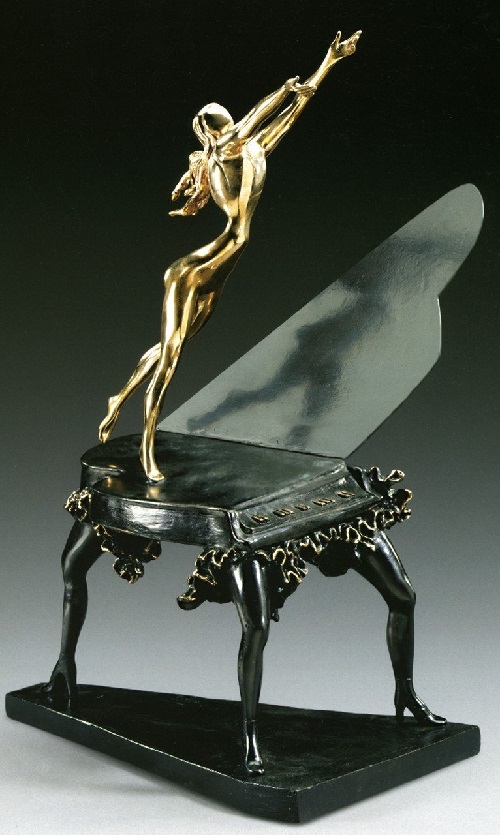 Surreal piano by Dali – wooden legs of piano replaced by the dancing female legs. Inert, banal object with a wave of a magic wand of Dali came to life and turned into a tool to enjoy music and dance at the same time. 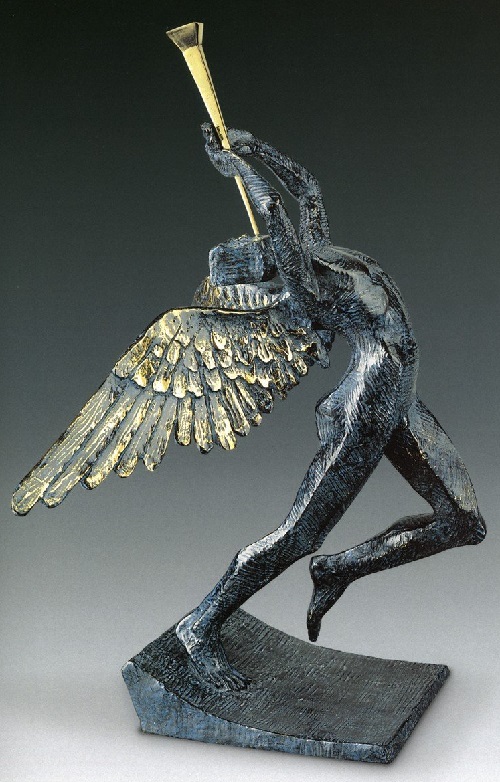 Dali once said that no idea is more inspiring than the idea of an angel. Since the late forties, when the artist began to weave in his works religious motives, an angel took a firm place in his work. Unsurpassed expression – crowded divine energy and at the same time easy, if it does not work this gravity-angel is a lyrical reflection of the fantasy world of Dali. He selflessly blows the magic pipe, sending the jubilant news to all who can hear it 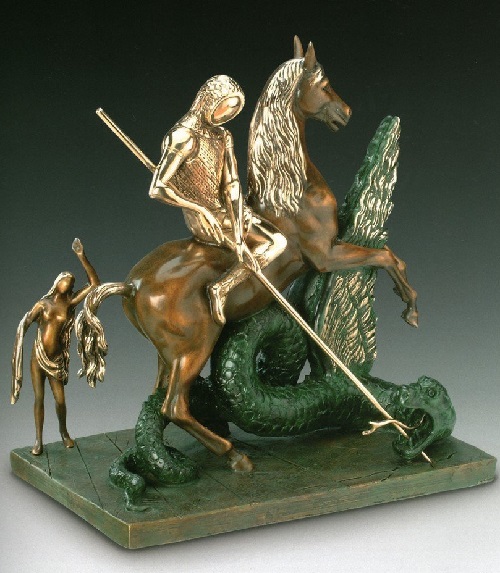 St. George and the Dragon

St. George is the guardian angel of Aragon. In the Middle Ages in Europe, he was considered the patron saint of chivalry. Dali in volume recreates the legendary battle of St. George with the dragon. We see the same woman, with her hand raised, symbolizing victory 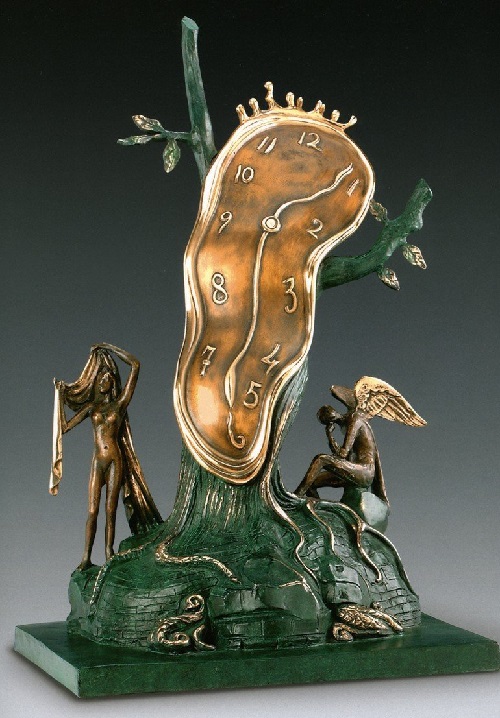 The Greatness of Time

Soft watch comfortably placed on an old tree, the eternal symbol of life. Tree of Life – way of cyclicity and continuity of life. Crown, crowning watch symbolizes the dominance of time. Nearby are immersed in meditation angel and barren woman who peers into the unknown, hoping to shield from it by the blanket. Thus Dali shows us that time is the supreme ruler, ruling over art and human existence 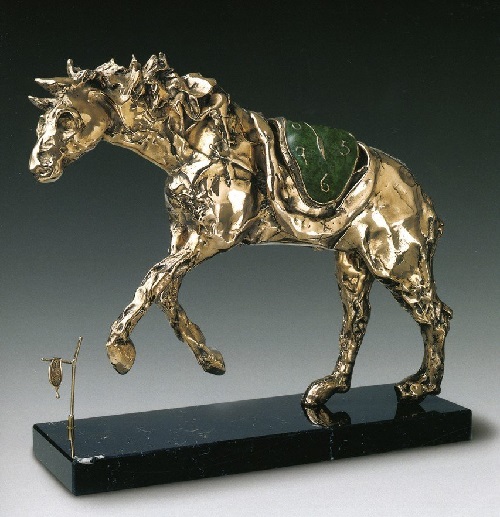 One of the most famous images of Dali – image of horse. Horse saddled with famous melting watches. Of course, this seat is not for man. Only time can ride this beast. The image is filled with expression, the eternal non-stop movement, primordial freedom and uncontrolled by human time 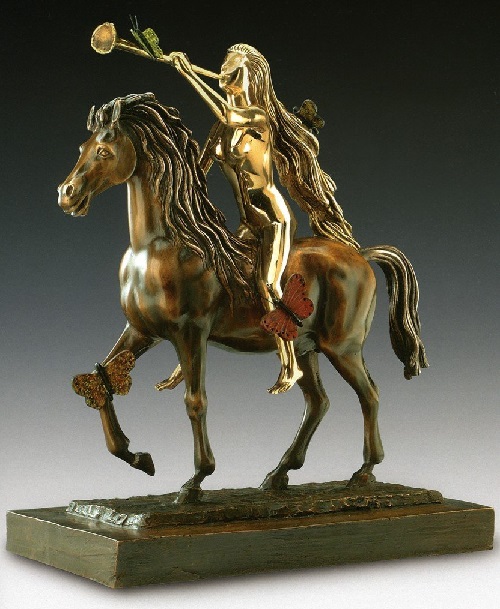 Dali, the great master of surrealism, singled image of Lady Godiva as one of his most beloved. This sculpture by Dali should glorify femininity and sensuality. Heralding the arrival of Godiva, butterflies flit around not just her and her noble horse – they are precious ornament of her body. Lady Godiva embodies the beauty of the earth. Butterflies symbolize world of unearthly beauty

Woman in a flame

Burning woman combines two obsessions of Dali – a living being absorbed by the fire and the female body with drawers. Flames embody the powerful subconscious desire while drawers symbolize the secret life of women. Woman powerless against her passions and vices. Symbol of powerlessness – the golden spike that supports the figure behind. Details of the person intentionally left not well developed, which would emphasize that this is not the image of a particular woman, but all women – present, past and future. 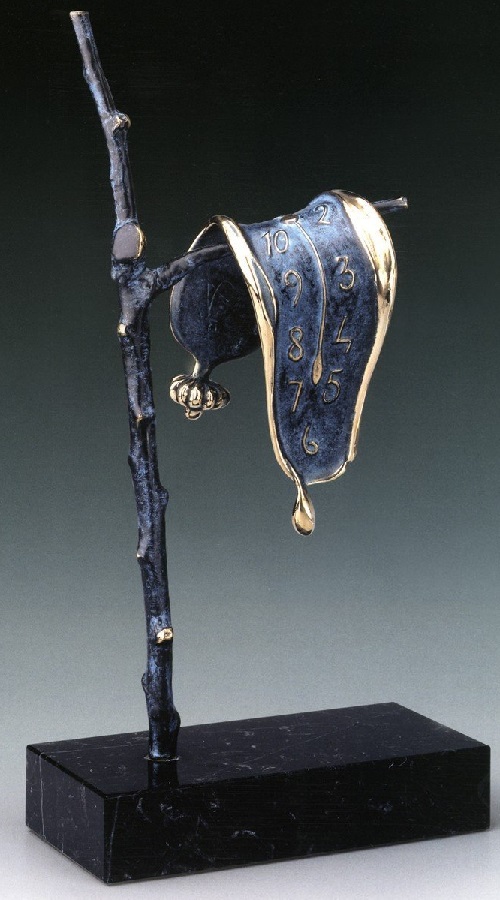 This is one of the most famous characters created by Dali. Soft watches are helplessly hanging from the branches of a tree. Time is no longer a tough and independent, it was merged with the space. Man has no control over the time-space, and the invented by man clock is no longer able to hold such a time 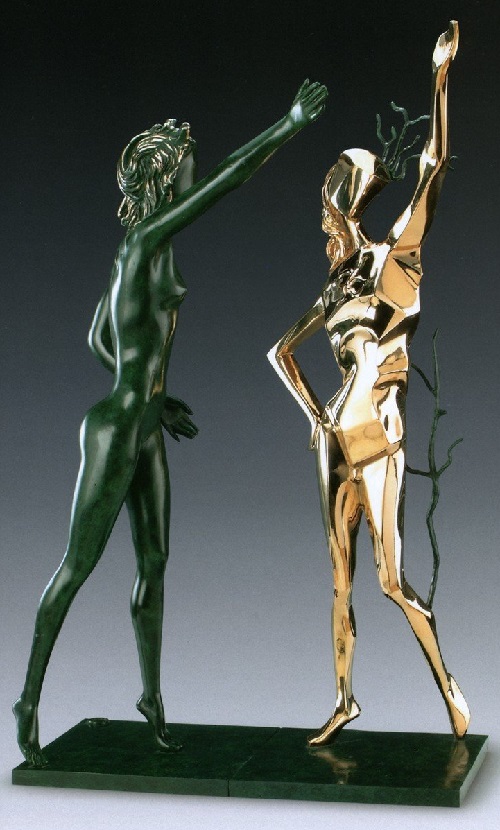 Terpsichore – the muse of dance. We see two dancers moving in a surreal symbolic space. Dancer with soft classical forms is grace and unconscious. His rhythm – the subtle sensuality. Second, the cubic forms – a chaotic rhythm of modern life. Different rhythms and dance joined together, each of us.