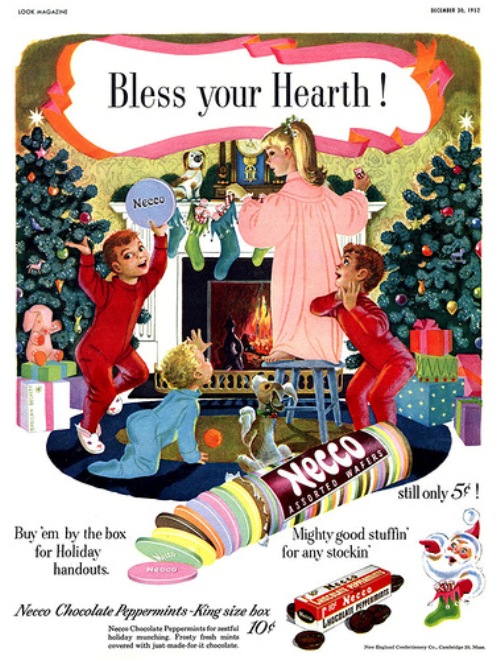 Vintage Holiday Advertising
Looking back at 50 – 70 years ago, vintage commercials are so cute and naive. And to be completely happy you need a hoover in the morning, or some bottles of pepsi and a pack of “Kent”. In addition, the ideal Santa – drinking beer and smoking Turkish “Murad”. However, we still sigh and say nostalgically old good times. Advertising, the promotion of goods or services through the use of slogans, images, and other attention-getting devices, has existed for thousands of years, but by the late 1990s in the United States it had become ubiquitous, permeating almost every aspect of American life. Advertising and brand logos appeared regularly on T-shirts, baseball caps, key chains, clothing, plastic cups and mugs. Also, garbage cans, bicycle racks, parking meters, the bottom of golf cups, in public restrooms, on mouse pads, and in public school hallways. Meanwhile, schools, located near major airports, and school rooftops were just for ads. And the quest for new advertising venues never stopped. Advertising conquered all possible places – even cows grazing near a highway (in Canada), and on the edible skins of hot dogs. 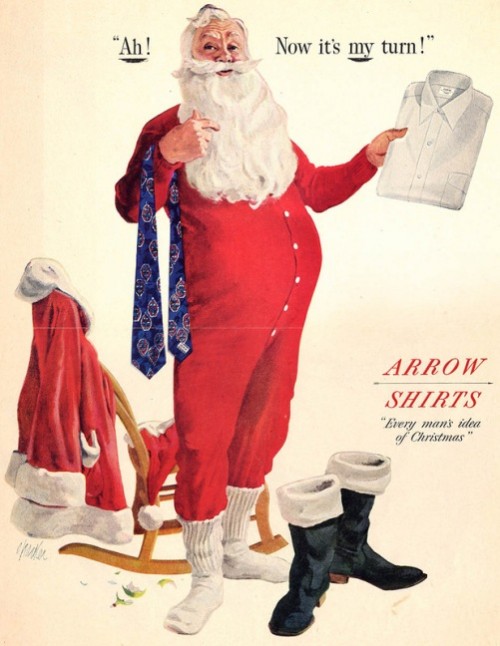 Still, before the 1920s, advertising was, by current standards, fairly crude. Patent medicines, advertised heavily during the late 1800s, and the dubious claims made by advertisers on behalf of these products tainted the advertising profession. But, by the turn of the century, the new ‘‘science’’ of psychology was melded with advertising techniques. And within ten years advertising agencies, emerged in the late 1800s, and the men who worked for them, began to gain some respectability. They were professionals who practiced the ‘‘science’’ of advertising, committed to the truth.

From the 1920s to the 1950s, advertisers and advertising dominated the major national media, both old (newspapers and magazines) and new (radio and television). The first radio advertisement was sent through the airwaves in 1922, and by the 1930s radio and its national
networks—the Columbia Broadcasting System (CBS) and the National Broadcasting Corporation (NBC) were a firmly entrenched part of American life.

In the 1950s, television quickly became the medium of choice for national advertisers, and about 90 percent of all U.S. households had sets by 1960. After that, audiences became increasingly fragmented for all media and advertising soon became targeted to particular markets. Magazines and radio led the way in niche marketing. In the 1950s, these media were immediately threatened by television’s mass appeal. 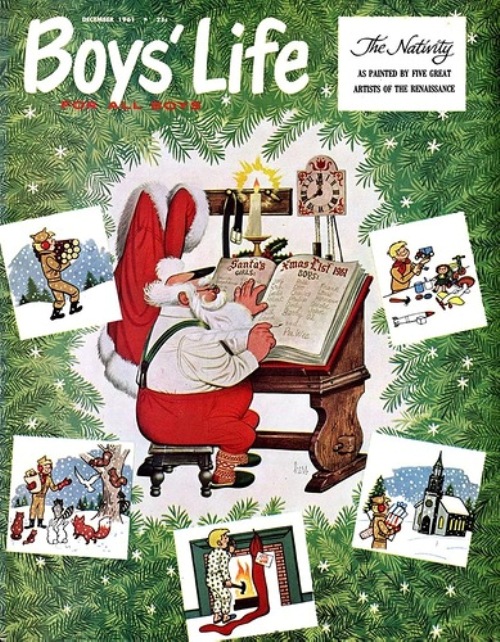 In fact, Coca-Cola advertising was some of the most memorable in the history of American business. Through the work of artists, such as Norman Rockwell and Haddon Sundblom, images of Coca-Cola became aspects of American life. Besides, such an image (and by relation Coca-Cola) became the American version of Christmas. Coke’s strategic marketing efforts, through magazines, billboards, calendars, and various other product giveaways emblazoned with the name Coca-Cola. Thus, made the product a part of American culture. The success of Coke advertising gave the product an appeal that stretched far beyond its simple function as a beverage to quench the thirst. Coke became identified with things that were American, as much an icon as the Statue of Liberty or Mount Rushmore. 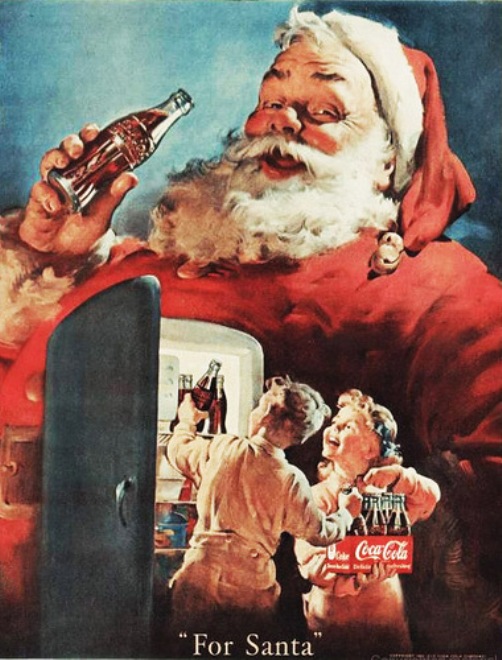 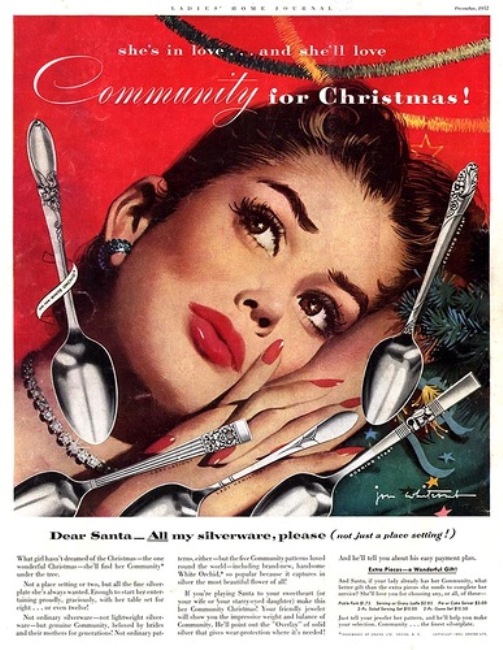 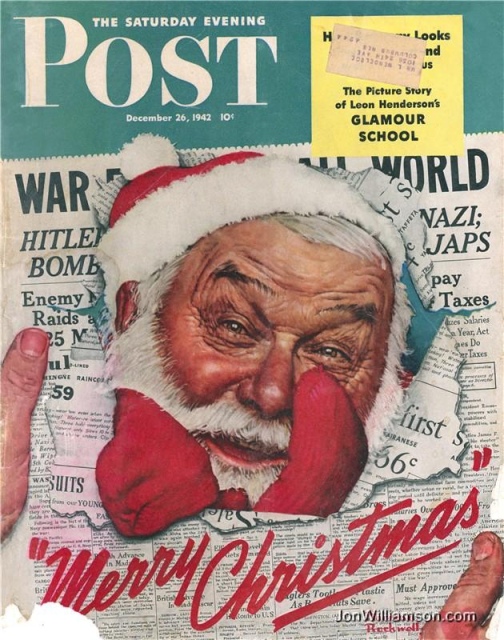 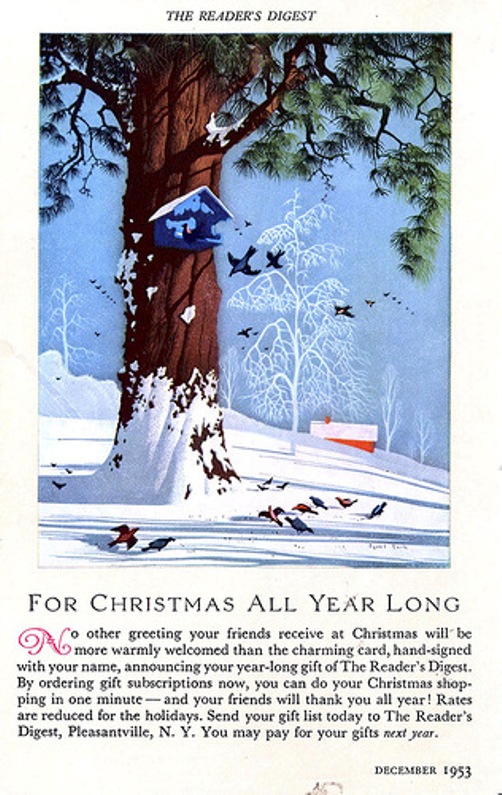 For Christmas All Year long, 1953 ads 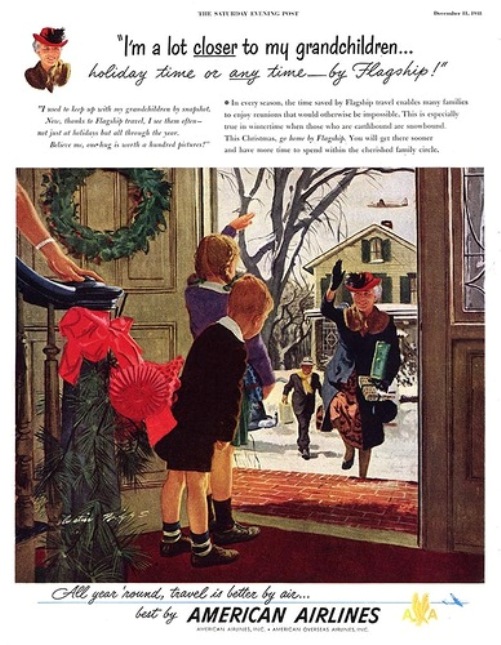 I am closer to my grandchildren. American Aitlines 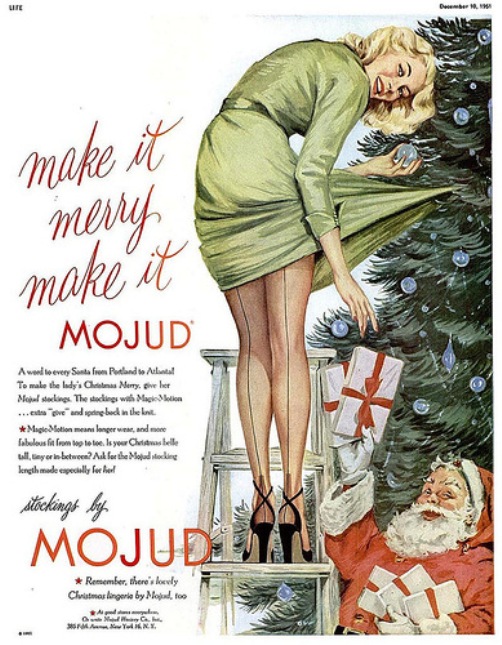 Make it merry, make it Mojud 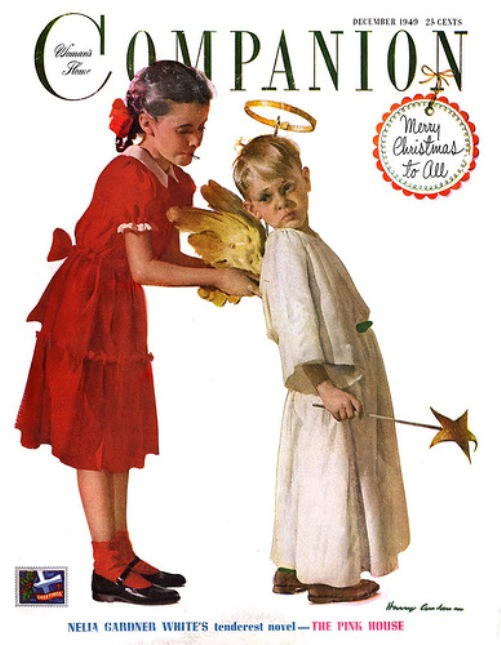 Merry Christmas to all 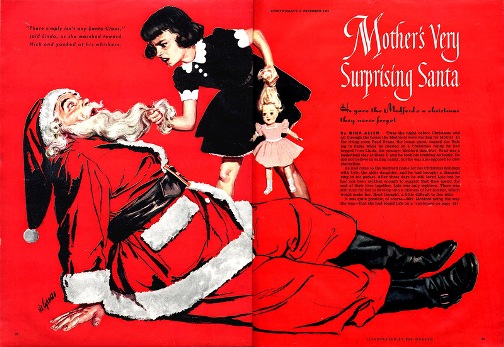 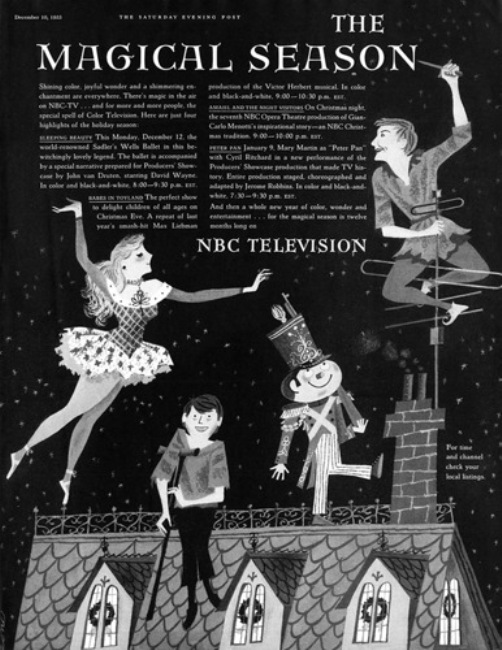 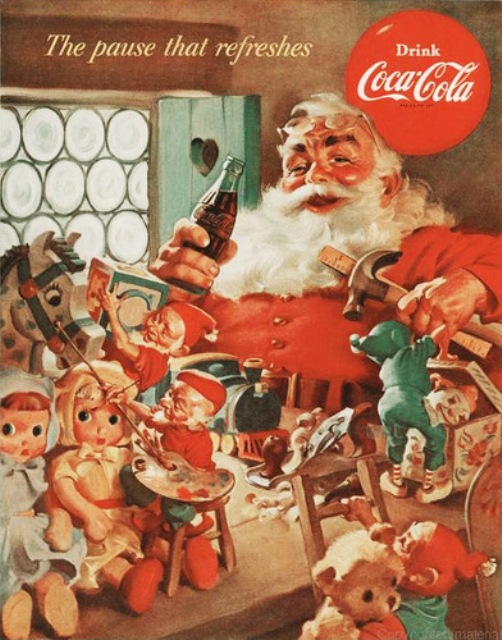 The pause that refreshes, coca cola 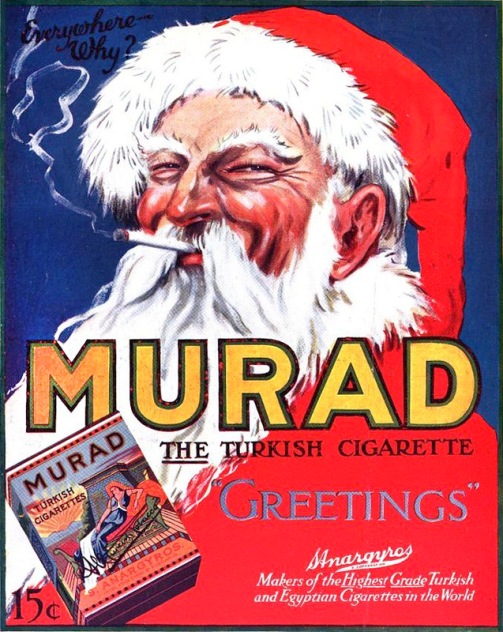 The Turkish cigarettes Murad – your choice for Christmas 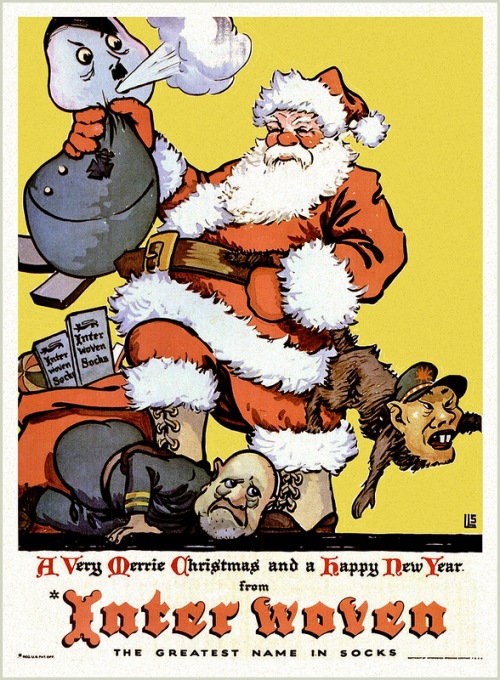 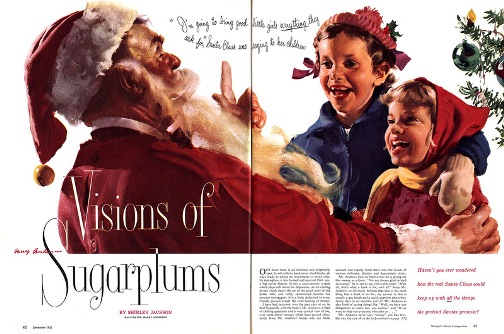 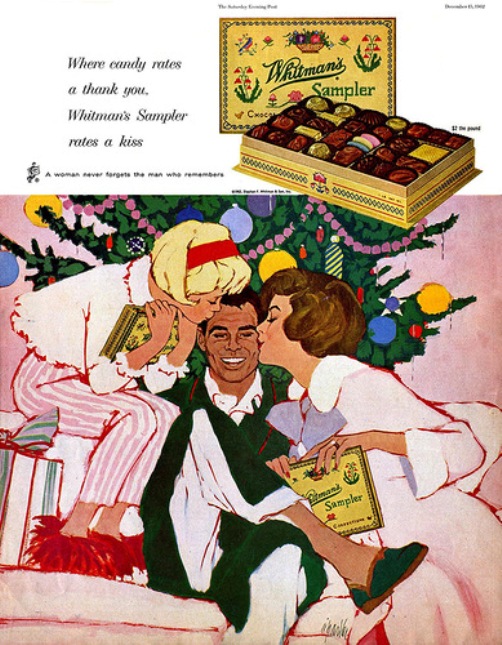