« Google office with Russian soul
Men who were women before » 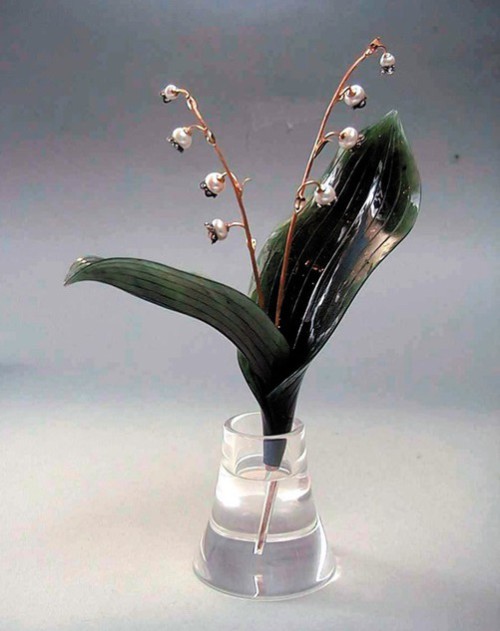 Beautiful Hyper-realistic Faberge flowers
To create such a masterpiece – the graver skillfully treated pieces of rock crystal, creating the impression that the vase is filled with water. Most often, we associate Easter eggs with the name of Faberge. However, the other side of Faberge was the manufacture of precious flowers in tiny vases. In addition to eggs, these vases with flowers brought international fame to Faberge. They perfectly combined the artist’s imagination, the skill of a virtuoso enameler, painstaking work of a jeweler and a stone-cutter. In particular, the jeweler used the amazing beauty of the gems of Siberia, the Urals and the Caucasus. Great expert in minerals, and a recognized authority in this area, Faberge was the appraiser of gems at the imperial court. The Faberge collection of minerals had a great reputation, and a part of it is still in the Mineralogical Museum in Moscow.

For the creation of these wonderful realistic flowers, the jeweler used various precious stones. In particular, Rock crystal and chalcedone, carnelian and agate, aquamarine and opal, jasper and obsidian, jade and rhodonite… Selected by artists with great taste, they, in addition, could change the natural color of the mineral, which gave them the right shades and tones.

Grand Duchess Maria Pavlovna (wife of Grand Duke Vladimir Alexandrovich, a senior uncle of Emperor Nicholas II and the President of the Imperial Academy of Fine Arts) had a large collection of hand-made flowers Faberge. At the St. Petersburg exhibition of works from the collections of Faberge highest personages in 1902, in a glass case with items that belonged to the Grand Duchess, the entire regiment was filled with precious flowers in crystal vases.

According to the inventory of the property of the palace of the Grand Duchess, compiled by the Bolsheviks in 1917, in her collection were 33 flowers. Among them cornflowers, forget-me-not, cacti and a dandelion made of gold and diamonds on a gold stalk with jade leaves in a vase of rock crystal.

British Queen Alexandra (sister of Russian Empress Maria Feodorovna) was also fond of collecting precious flower compositions, performed by masters of Faberge. In her collection of more than 20 items were branches of mountain ash, wild cherry, raspberry and cranberry, wild daisies, chrysanthemums, carnations, pansies, and a miniature pine tree in a pot made of jasper. Now, this “garden”, grown in the early 20th century, belongs to the Queen of England Elizabeth II.

In fact, the British Royal Collection holds the largest number of preserved flowers of Faberge. Twenty six – the total number of about eighty names. 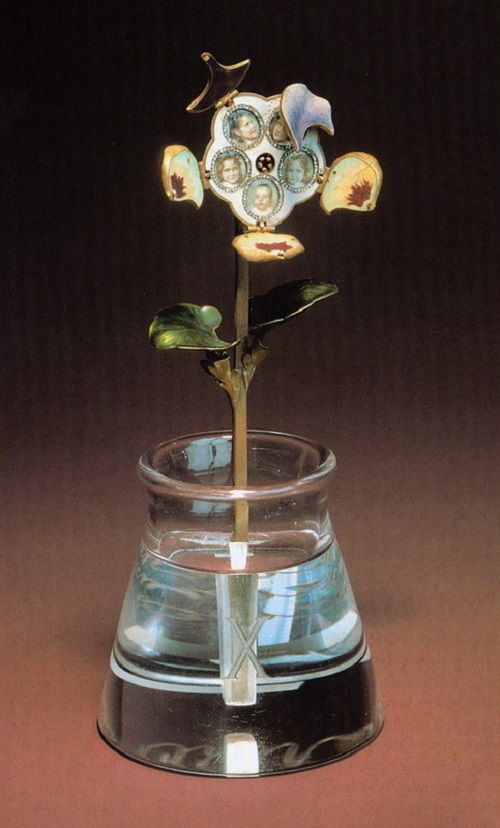 ‘Pansy’ – made of gold, enamel and diamonds, placed in a vase of rock crystal, as if it’s filled with water

“Pansy” – the only flower in the world of Faberge, equipped and decorated with a mechanism of portrait miniatures. Made in 1904 in the workshop of Henrik Vigstrem, Empress Alexandra Feodorovna presented it to Nicholas II, to a decade of their marriage. Therefore, a crystal cup decorated with a Roman numeral X, and the engraved names of the royal children. Pressing the button opens a tiny gold-coated finest polychrome enamel flower petals, and the whole gallery of miniature portraits become visible. Here are – the portraits of four daughters and only son and heir of the imperial couple, painted in watercolor on the bone, in the finest diamonds cut from the “Rose”. 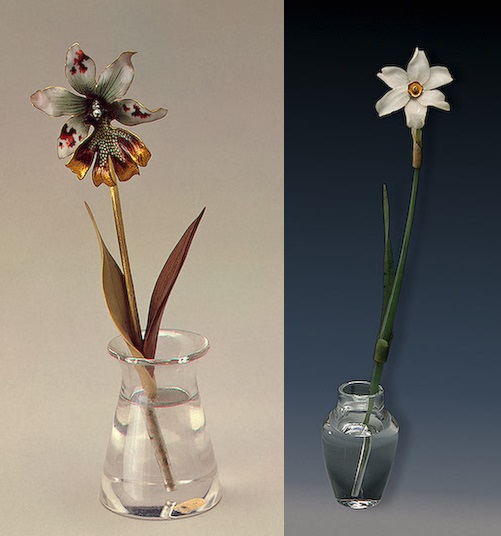 Unique Flower ‘Lily’, 1900, made of gold, jade, rock crystal, lily buds – of pearls. Among the owners of this fine work were the Dowager Empress Maria Feodorovna, and the wife of Nicholas II, Empress Alexandra Feodorovna 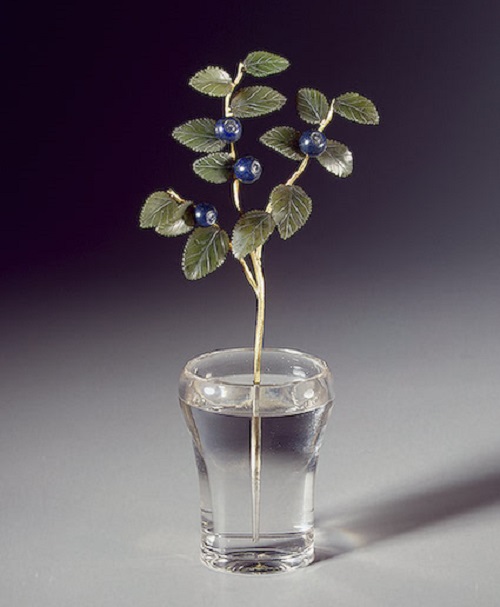 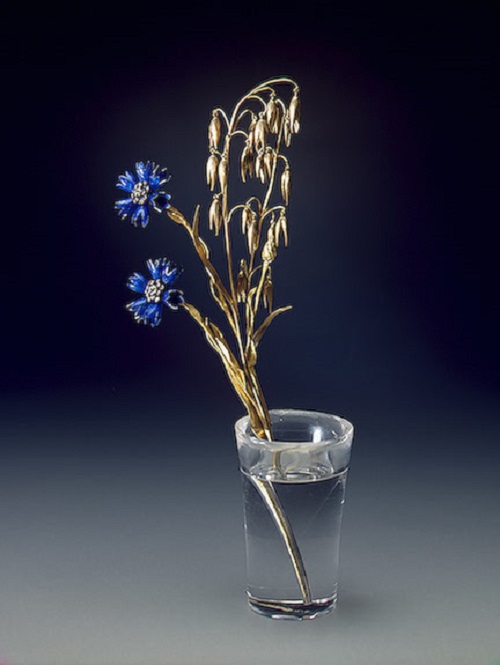 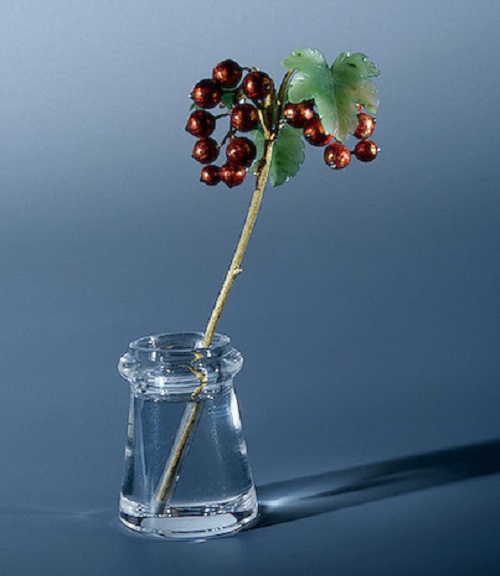 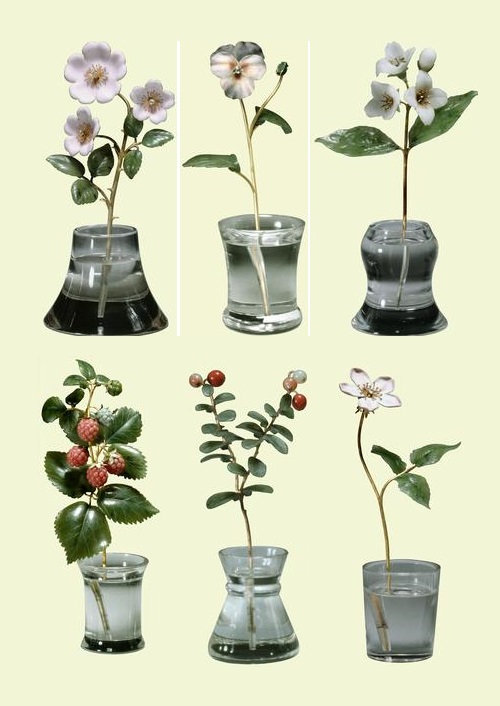 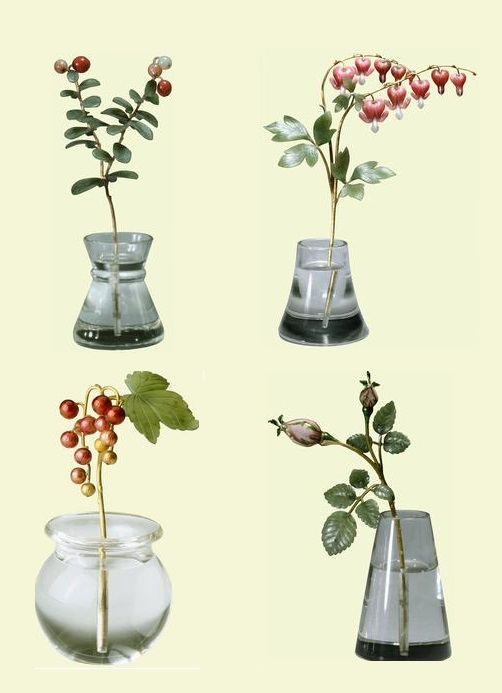 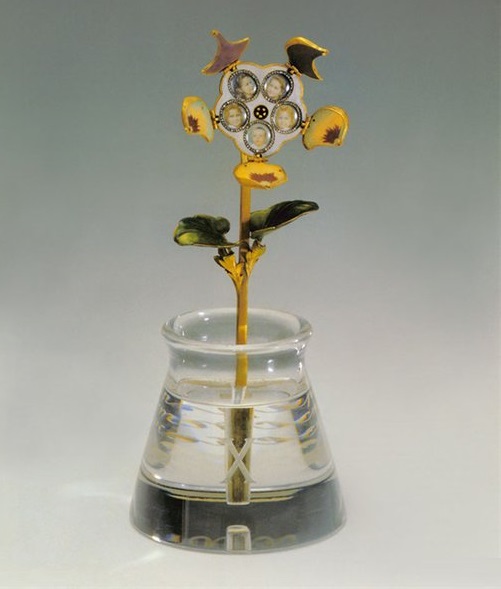 Portrait gallery in the flower 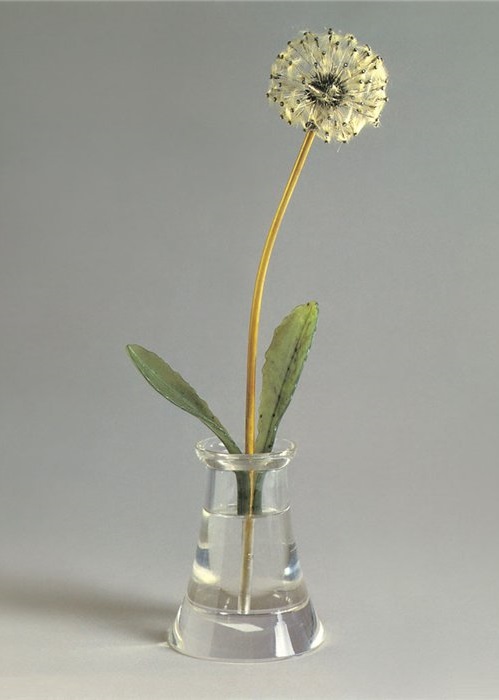 ‘Dandelion’ – a symbol of impermanence of life 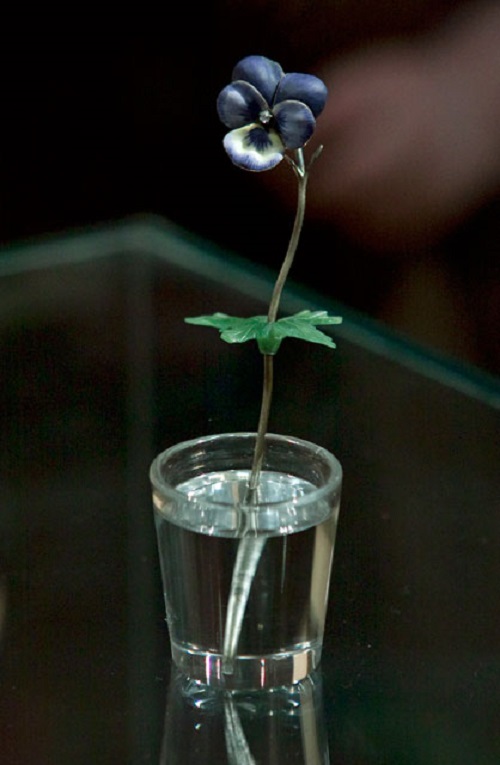 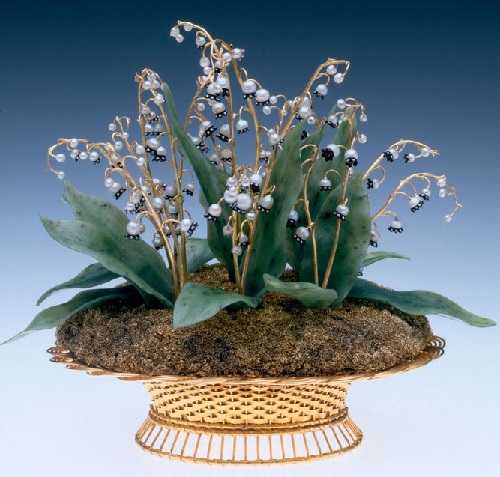 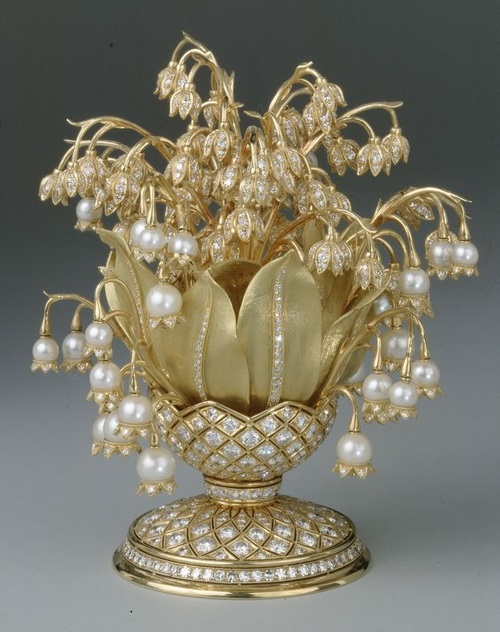