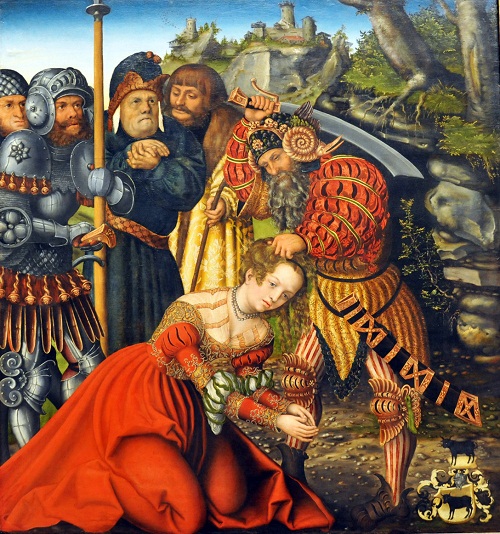 Saint Barbara in art
Feast Day of St. Barbara is on 17 December in the Orthodox Church, and in the Catholic Church on December 4. St. Barbara (Varvara in Russian) lived in the third century in the city of Iliopole the Phoenician, she died in 306, venerated as a Christian martyr. In honor of her are named many geographical locations all over the world and even large asteroid, opened in 1883. Saint Barbara is depicted on the coat of arms of the village Vlasikha in the Moscow region. In 1995, Saint Barbara was declared heavenly patron of the strategic rocket forces of Russia. At destruction of the gold-domed St. Michael’s monastery in 1930s the relics of St. Barbara were given to the Museum, now they are held in the Vladimir Cathedral in Kiev, Ukrainian Orthodox Church.

Saint Barbara is depicted in art as standing by a tower with three windows, carrying a palm branch and a chalice, sometimes with cannons depicted by her side

Her father was a pagan and a representative of the aristocracy in Asia, under the Emperor Maximian. She is the patroness of sudden death that in Christianity is considered in most cases punishment as death without repentance and communion. In the Catholic Church she is one of the fourteen Holy helpers.

She featured a special beauty and the father locked her in the tower to hide her from prying eyes. During the period of captivity Barbara was studying the world around her, which was visible from the Windows. 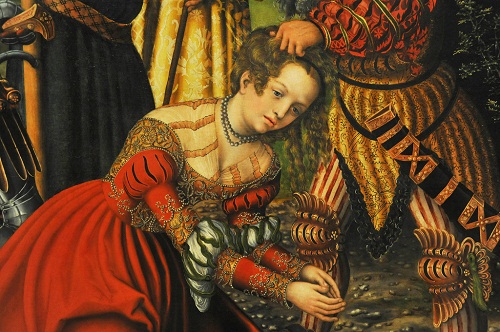 Fragment of “The Martyrdom of Saint Barbara” by Lucas Cranach the Elder, c. 1510

Barbara came to the idea of a single creator. When her father allowed her to leave the Tower, Barbara met with Christians and took the baptism. She rejected an offer of marriage that she received through her father. When the father learned of the religion, the barbarian’s daughter was brutally tortured. Every morning her wounds were healed. Torches that were to be used to burn her went out as soon as they came near her. Finally she was condemned to death by beheading. Her father himself carried out the death-sentence. He got the punishment for this – he was struck by lightning on the way home and his body was consumed by flame. 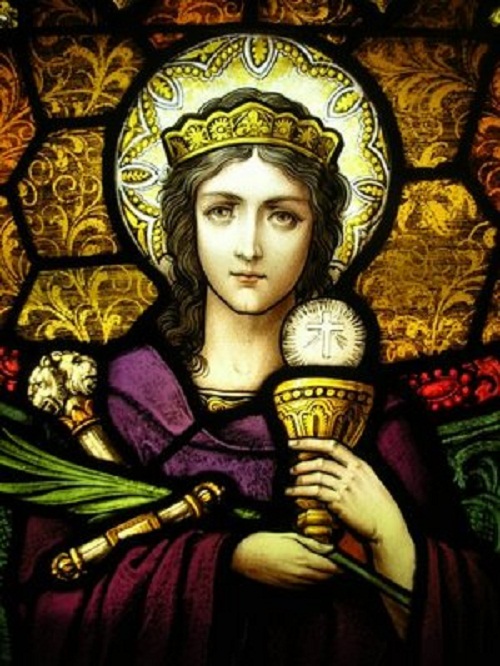 Barbara was buried by a Christian, Valentinus, and her tomb became the site of miracles. Barbara held true to her faith. Her body was divided into parts, for centuries they were passed from hand to hand, part of her is in Kiev. 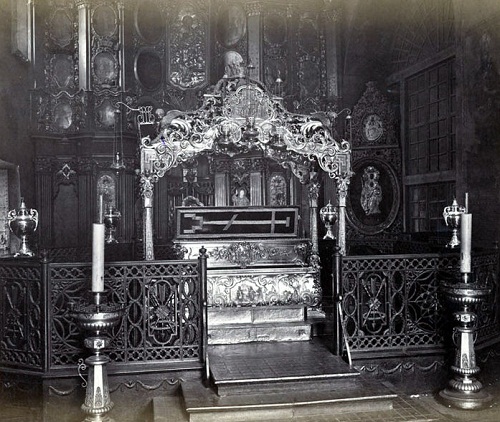 The reliquary with the relics of St Barbara in the Golden-Domed Monastery, Kiev

Scholars doubt that St. Barbara existed as more than a legend that emerged during the second century. The story is that her father locked her away in a tower to prevent her from ever marrying. When she became a Christian he tried to kill her, then turned her in to the pagan authorities. Then he was killed by a bolt of lightning. 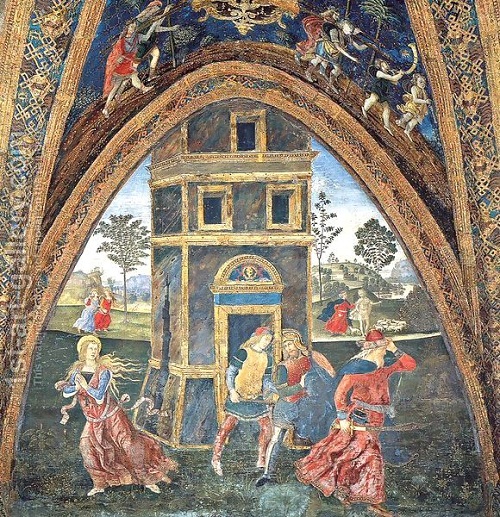 Painting by By Bernardino di Betto (Pinturicchio) 1454-1513. The Martyrdom of Saint Barbara

In parts of France, Germany, and Syria, St. Barbara’s Day is considered the beginning of the Christmas season. In southern France, especially in Provence, it is customary to set out dishes holding grains of wheat soaked in water on sunny window sills. There is a folk belief that if the ‘‘St. Barbara’s grain’’ grows quickly, it means a good year for crops. But if it withers and dies, the crops will be ruined. On Christmas Eve, the grain is placed near the cre`che as a
symbol of the coming harvest.

There is a similar custom in Germany and the Czech and Slovak republics, where cherry branches are placed in water and tended carefully in the hope that they will bloom on Christmas Eve. In Syria, St. Barbara’s Day is for feasting and bringing food to the poor. In Poland, St. Barbara’s Day is associated with weather prophecies. If it rains, it will be cold and icy on Christmas Day; if it’s cold and icy, Christmas will be rainy. 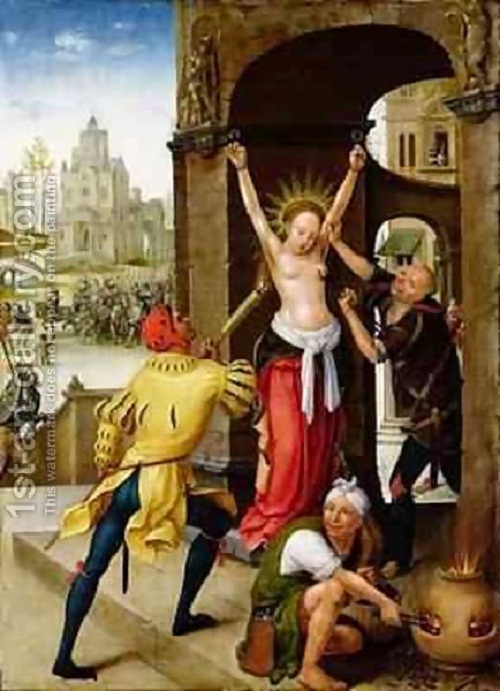 Jean The Elder Bellegambe. The Martyrdom of St. Barbara, 1528 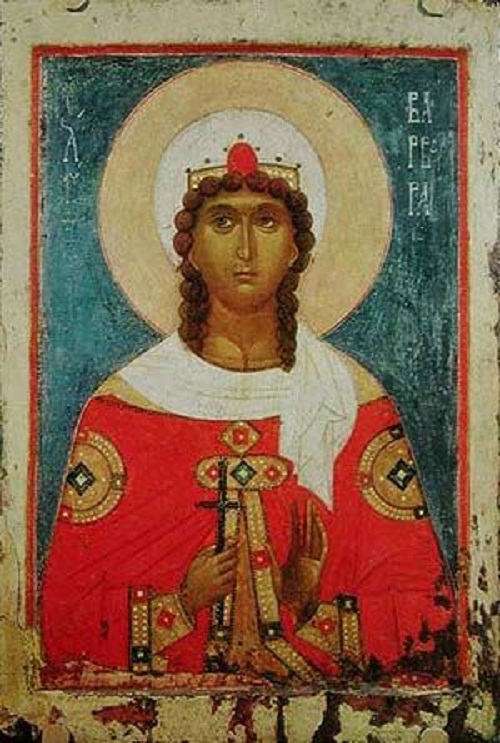 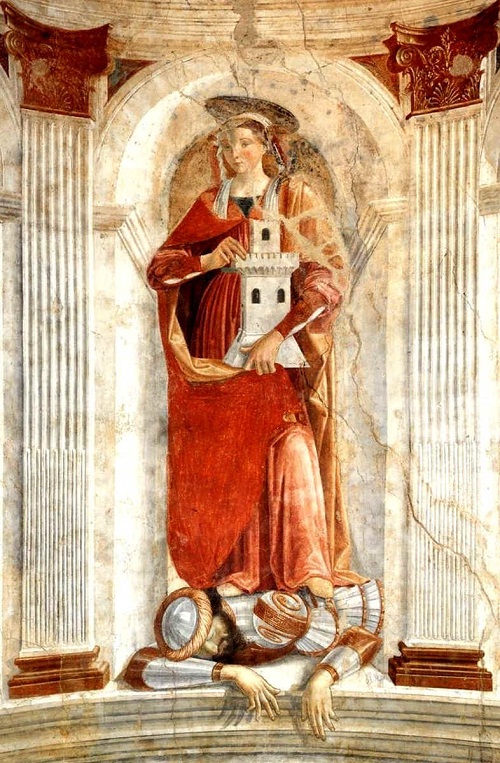 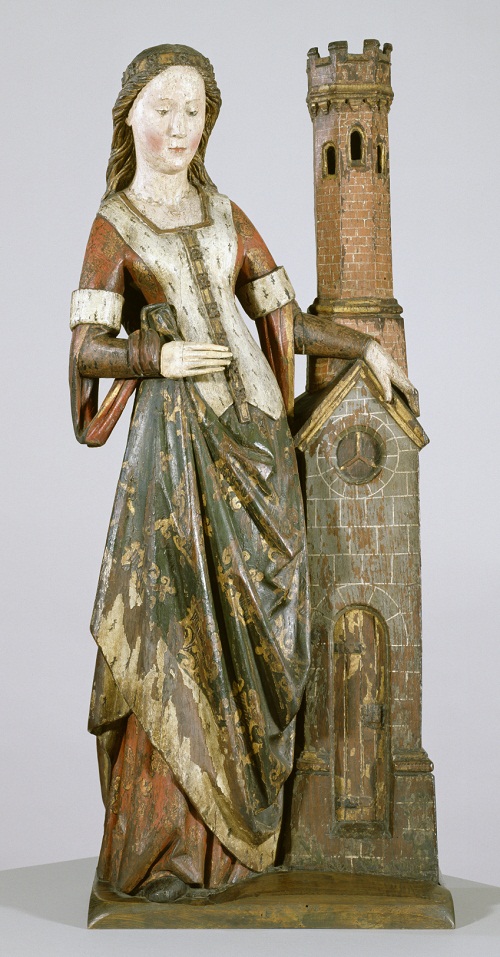 Sculpture. The virgin martyr stands by her usual atttibute – the tower with three windows symbolizing her belief in the Trinity. Date between 1450 and 1500 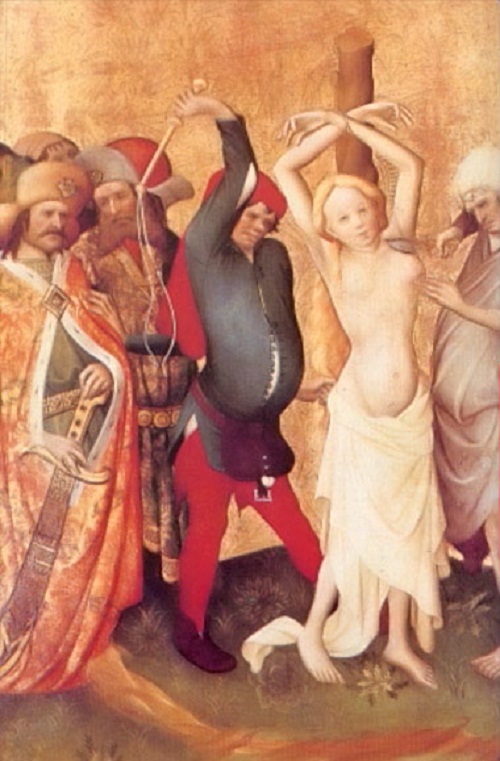 Meister Francke, from the Barbara Altarpiece (before 1424) 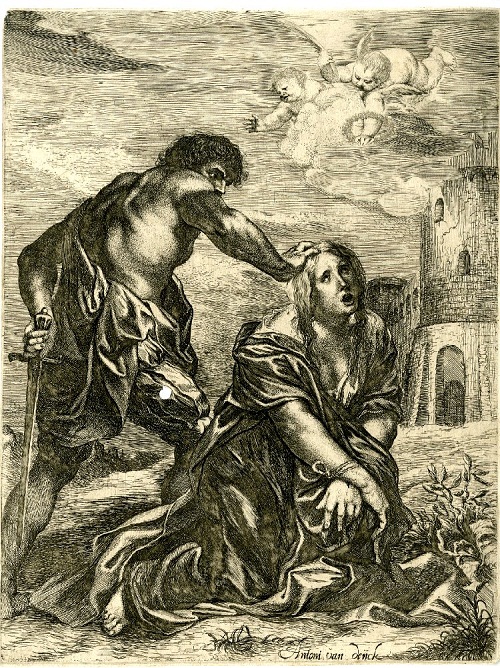 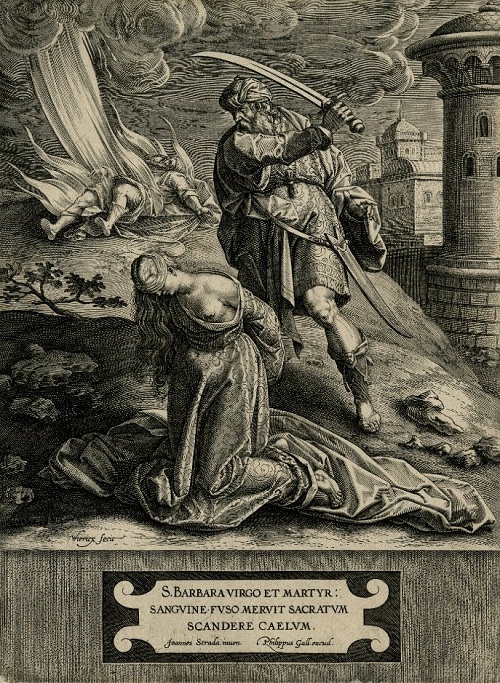 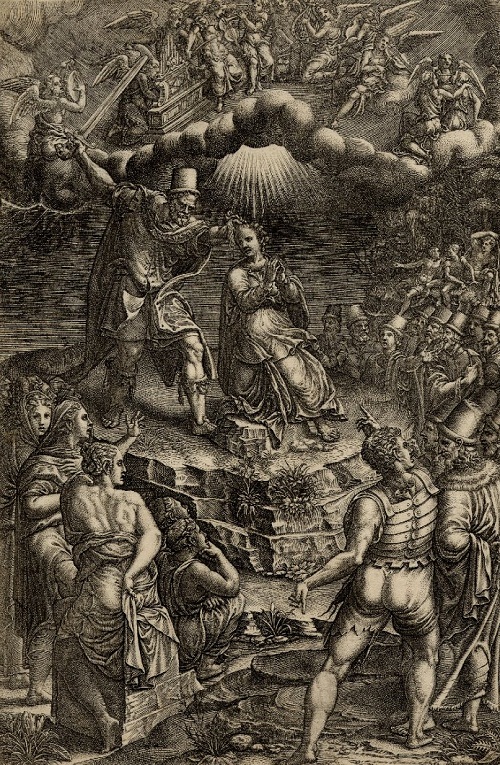 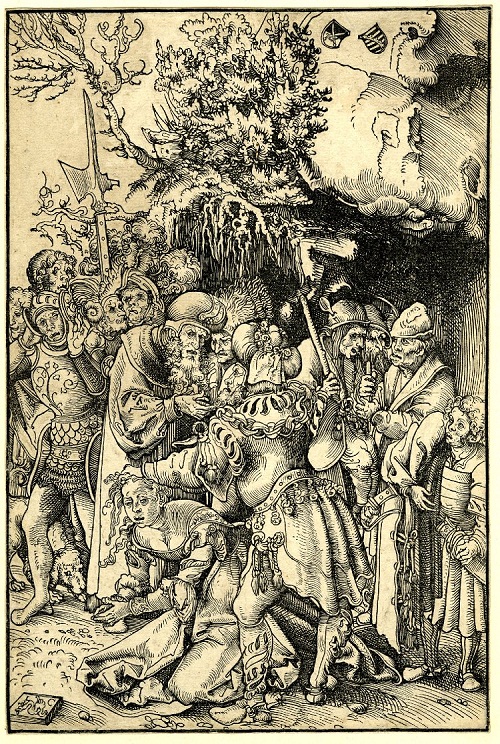 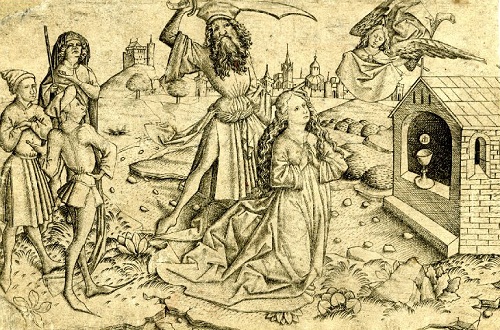 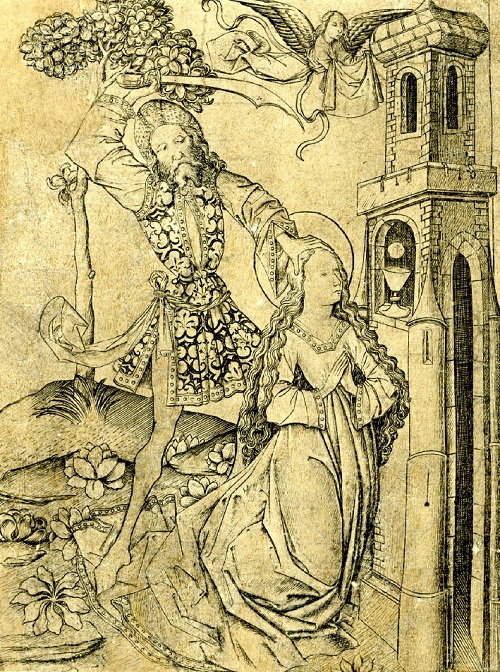 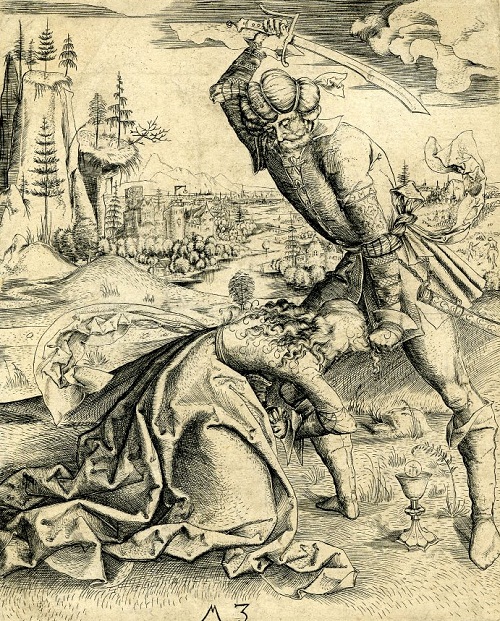 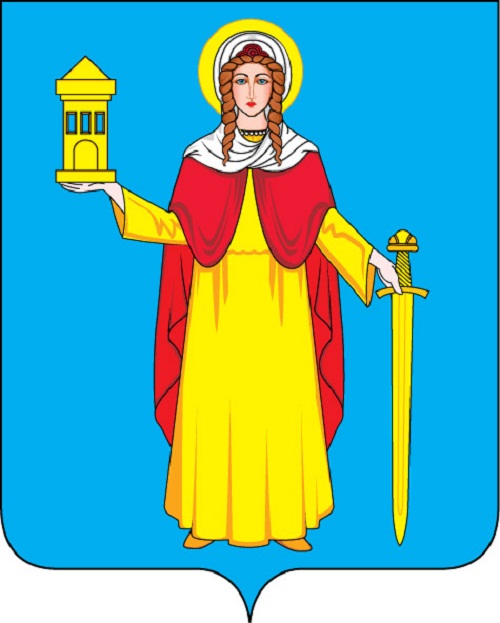 coat of arms of the village Vlasikha in the Moscow region

marinni.livejournal.com
Holidays, Festivals, and Celebrations of the World- Dictionary 2005