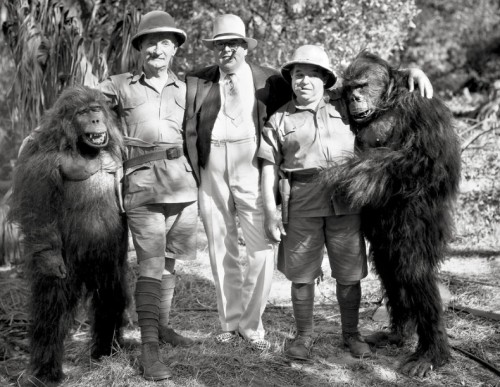 Charlie Murray, director Vin Moore and George Sidney in The Cohens and Kellys in Africa (1931). The Gorilla 1927 silent horror film

The Gorilla 1927 silent horror film
1927 American silent horror film directed by Alfred Santell based on the play of the same name by Ralph Spence. The film stars Charles Murray, Fred Kelsey, Alice Day and Walter Pidgeon. The plot of the film revolves around a series of murders committed by a man in an ape suit. The film was remade with sound in 1930 and 1939 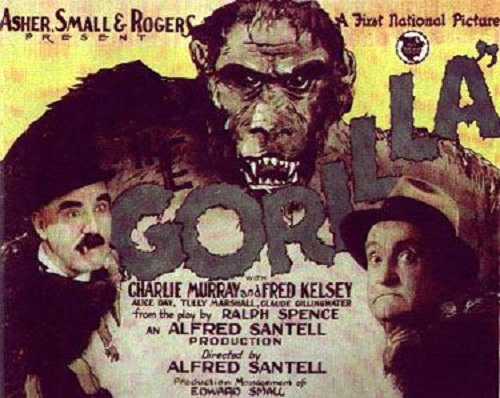 Out of the underworld comes the Gorilla – strangler of men, kidnapper of women! In come Mulligan and Garrity, two famous detectives who hear all, see all and know nothing! Out go the lights – on go the thrills! Shrieks! Yells! Roars! Screams! More Shrieks! “MULLIGAN, MULLIGAN, WHERE THE HELL IS MULLIGAN?”

Ralph Spence wrote his play ‘The Gorilla’ in the mid-1920s, when Broadway audiences had already seen several dead-earnest thriller plays about spooky old houses full of trapdoors and masked villains. The posters for the 1925 Broadway production of ‘The Gorilla’ acknowledged its predecessors, by ballyhooing: ‘Out-bats “The Bat”! Out-cats “The Cat and the Canary”! Out-warns “The Last Warning”!’ What made ‘The Gorilla’ a hit onstage was the fact that it spoofed the cliches of spooky-house plays while managing to be somewhat scary on its own merits, much as ‘Arsenic and Old Lace’ would be a few years later.

The various film versions of ‘The Gorilla’ downplay the thriller elements, replacing them with lowbrow slapstick comedy … thus rendering a wildly improbable story line even more implausible. Fortunately, the 1927 silent film (the first screen version) is quite funny, although it deviates considerably from Spence’s play. Sour old miser Cyrus Townsend (played by sour old character actor Claude Gillingwater) is murdered. There are several suspects, since Cyrus had many enemies … including his brother Uriah (Tully Marshall). Cyrus’s daughter (beautiful black-haired Alice Day) decides to solve her dad’s murder. For some reason, the leading suspect is a gorilla, who appears to have wandered in from the street. (As gorillas do.) Or could it be that the gorilla is a murderer in a gorilla suit? Maybe there are TWO gorillas: a real one, and one in a costume…

The plot makes no sense at all, but this movie is enjoyable in a demented way. Veteran comic Charlie Murray (a former Keystone Cop) steals the show as a dim-witted detective. The funniest scene has Murray tiptoeing through the spooky house in search of the gorilla, unaware that the gorilla is tiptoeing along directly behind him! This is the sort of routine that Lou Costello did later, but it’s much funnier as Murray does it … and the silent film gives Murray an advantage over Costello. (In a silent film, we don’t wonder why the comedian doesn’t hear the gorilla tiptoeing behind him.)

Eventually, virginal damsel Alice Day ends up in the clutches of the gorilla. Just so we get the symbolism, Alice wears a diaphanous white outfit in this scene that makes her look very virginal. The photography and direction are excellent, and there are some impressively creepy scenes centered in a spiral staircase worthy of Hitchcock’s ‘Vertigo’.

HERE COMES THE SPOILER RIGHT NOW. Handsome young Walter Pidgeon, who is so helpful to sweet Alice, turns out to be the dastardly villain. Interestingly, Pidgeon was also in the 1930 remake of ‘The Gorilla’, although in a different role. I’ll rate this silent version 9 points out of 10, despite its wild implausibility. 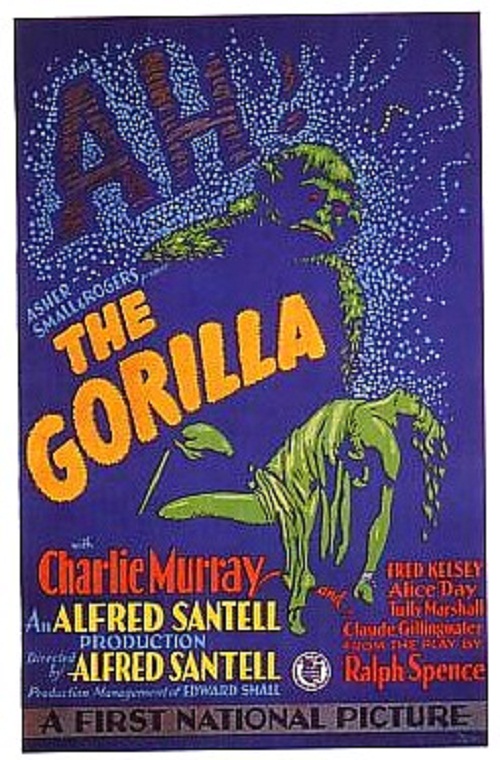 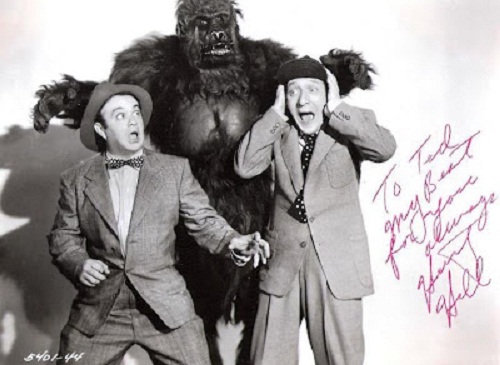 based on The Gorilla 1927 funny photo shoot 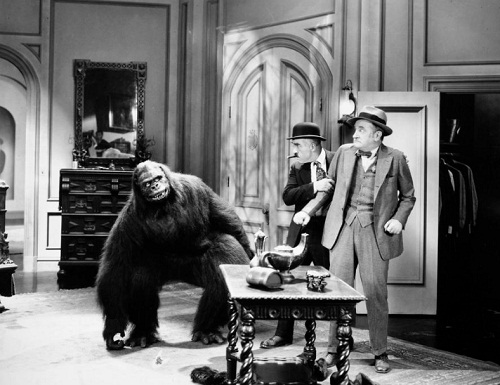 Fred Kelsey and Charles Murray in The Gorilla 1927 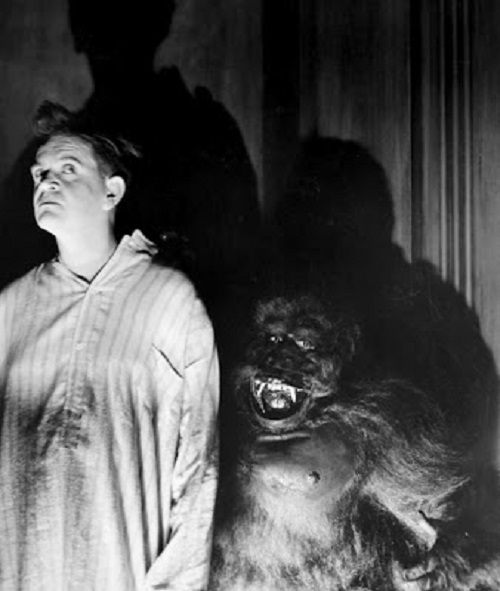 Lloyd Hamilton and a gorilla 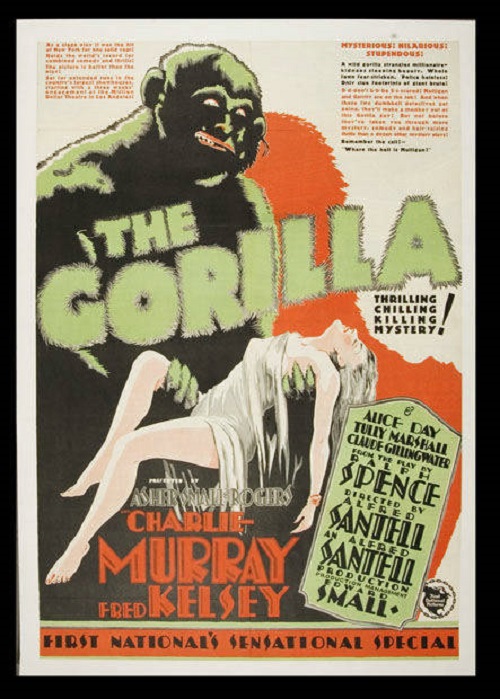 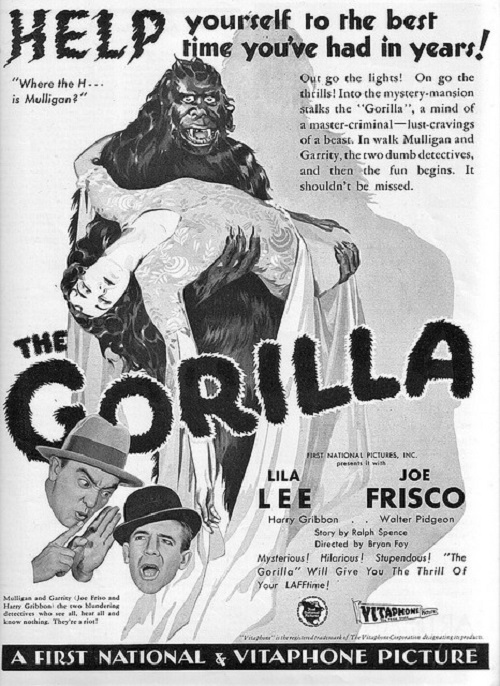 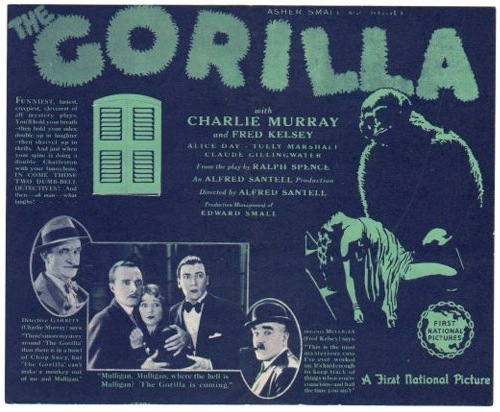 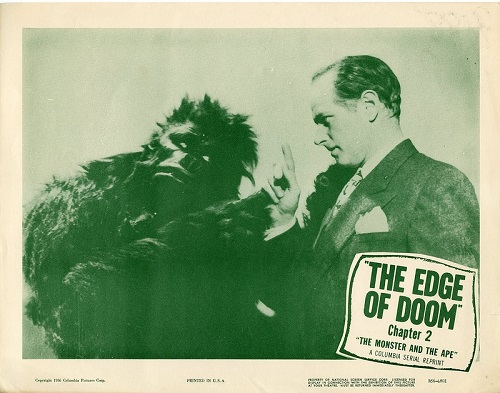 The edge of doom. The Gorilla