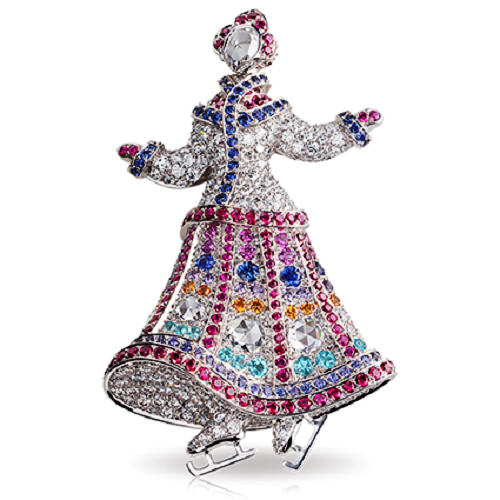 Les Saisons Russes Faberge style jewelry
The famous jewelry house Faberge revived in 2009 by Brian Gilbertson, gave a new life to the legendary brand. The company organized stylish jewellery collections to promote “Russian Seasons,” and “Legends of the Faberge”. Les Saisons Russes is evoking the rhythms of the Russian seasons. Particularly, its traditions, crafts, fable and folklore, pagan of Slavic in origin. This poetic Faberge collection focuses on the well-defined seasons of the year. B esides, each with its own celebrations and rituals, the glittering splendor of winter balls. The jewels, in true Faberge style, demonstrate an intuitive interplay of rare colored precious gems, diamonds and pearls with superlative hand artisanship. Jewelers managed to capture and reflect the changing light, colors and atmosphere of each season. 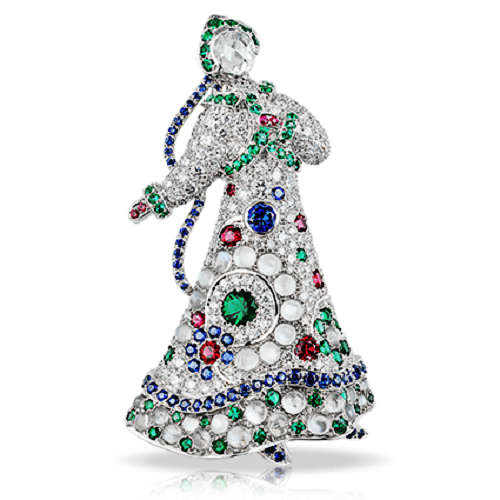 One of the series of figural brooch-pendants, with maidens dressed in elaborate gem-encrusted costumes, based on traditional Russian dress and embroideries. This is Lara, visiting Kizhi, the island on Lake Onega, celebrated for its miraculous wooden church, with twenty-two cupolas, built in 1714. Made of white gold, with a rose diamond face, dressed in a costume of white diamonds. Studded with emeralds, moonstones, blue sapphires, and spinels, with 373 stones, totaling 11.55 carats. 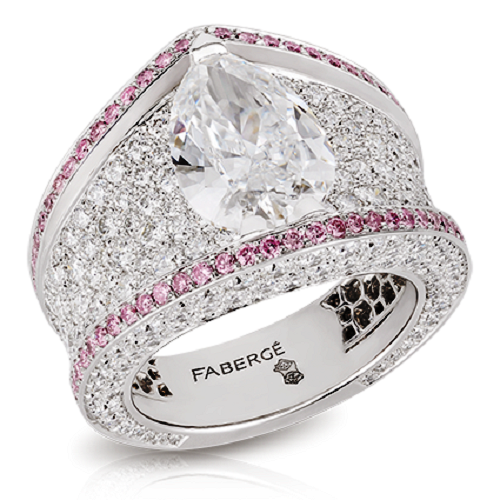 Sarafan is a collection of jewels composed of intense, fiery rubies and Alexandrites. The rare and quintessentially Russian gem, Alexandrite changes from purple to green, contrasting with diamonds. The essential element of female national folk costume, sarafan, later taken up by the nobility, and reinterpreted in lavish and bejeweled fabrics. The cupola motif incorporated into the Sarafan designs refers to the shapely domes of churches. In particular, the famous wooden 18th century churches of Kizhi, on an island in Lake Onega, Karelia. The colors of the jewels reflect the mellow warmth, russet, golden tones and lingering shadows of a Russian autumn, poignantly into the long winter. 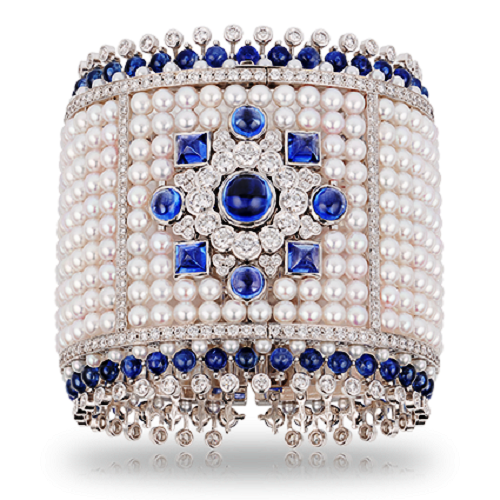 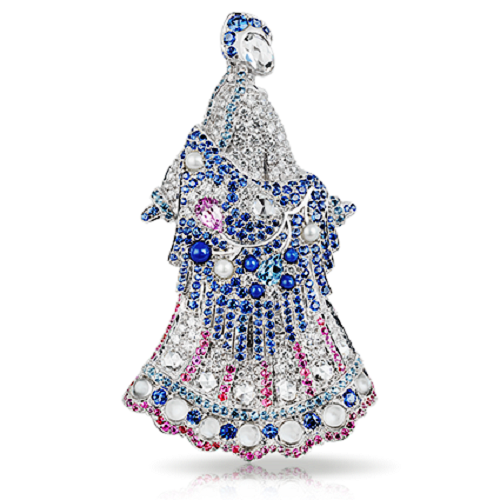 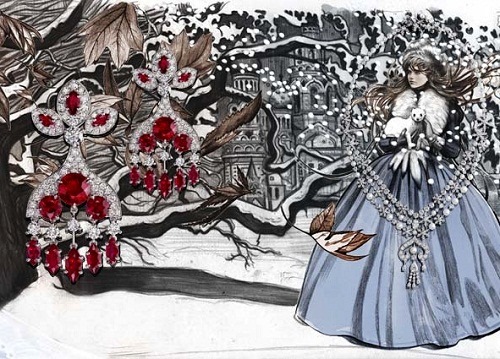 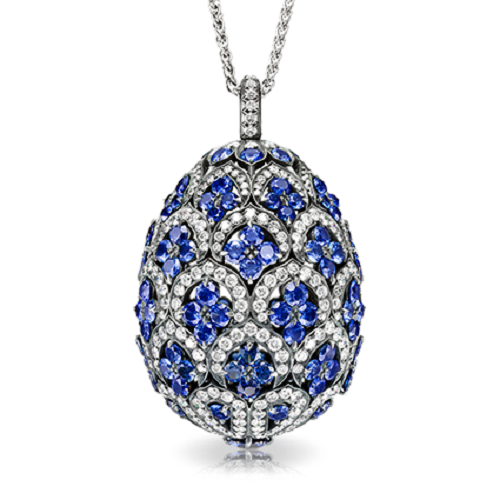 Named after the beautiful Princess Zinaida Yusupova, these striking and opulent jeweled egg lockets – designed in the style of traditional Uzbek textiles, their intricate geometric patterns set with diamonds and intense colored gems 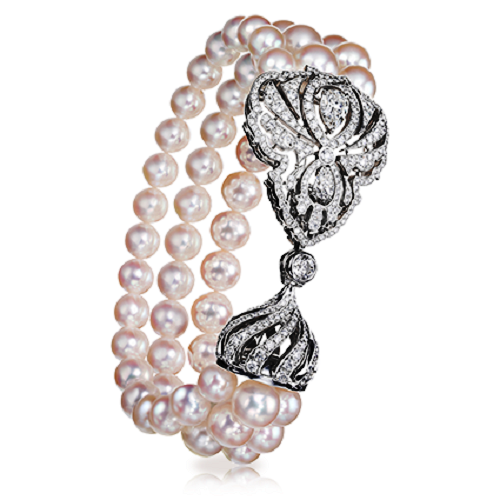 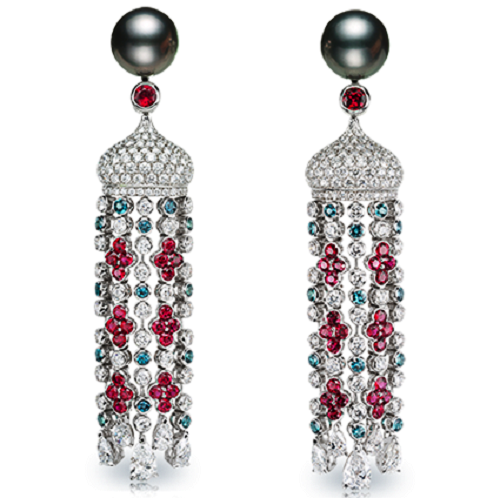 Sarafan Earrings, with a pearl stud from which hangs the distinctive Sarafan cupola and a fluid tassel of Alexandrites, rubies and pearls, in the style of traditional Russian textiles. Set in 18 carat white gold, 2 pearls and white diamonds, rubies and Alexandrites totaling 7.95 carats 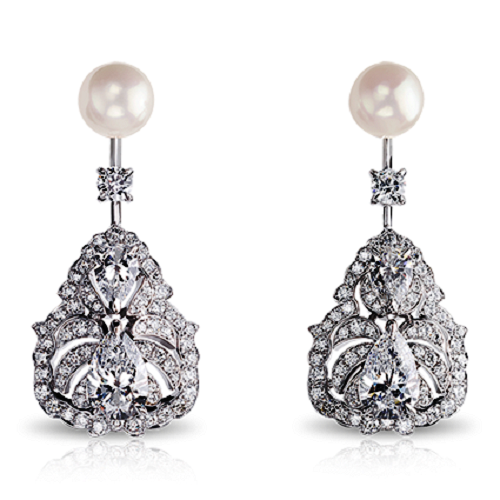 Diamond and pearl earrings in the Imperial series, designed as stylized interpretations of a Russian aristocratic crest. 18 carat white gold, 2 round pearls and 68 diamonds totaling 3.83 carats 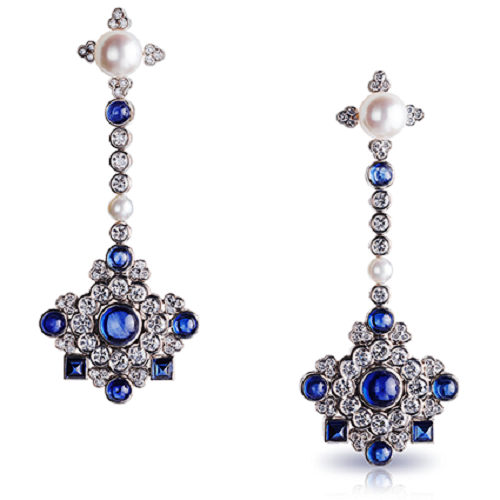 Dentelle de Perles Chandelier Earrings set with a single round pearl, on the earlobe, from which hang a trail of gems and an intricate mosaic cluster, composed of diamonds and 16 cabochon sapphires, totaling 6.25 carats 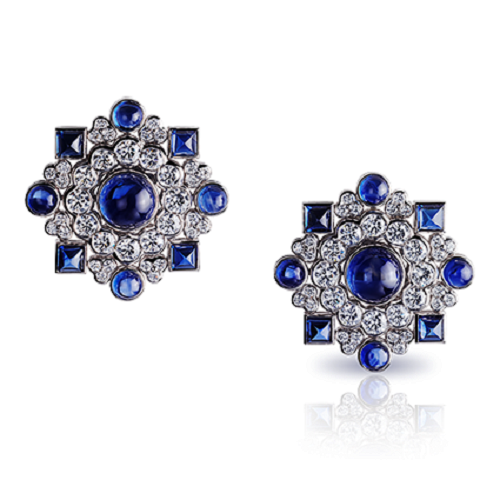 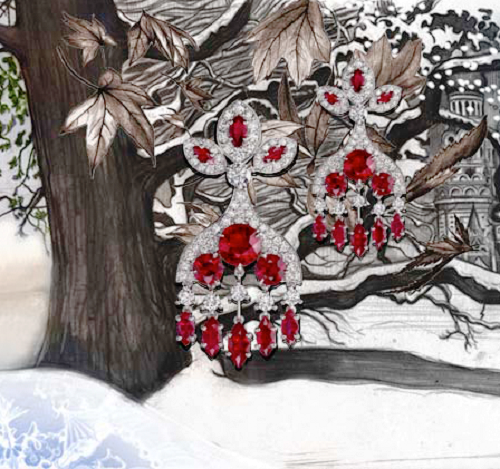