To see daylight for first time in 30 years 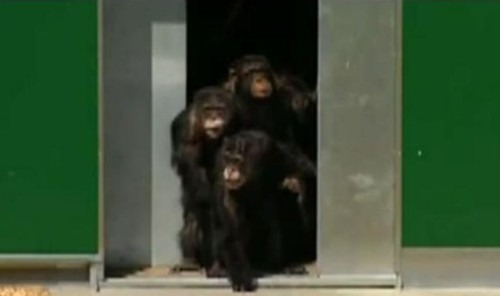 This heartbreaking photo captures their first interaction with the outside world. To see daylight for first time in 30 years

To see daylight for first time in 30 years
No creature should EVER have to go through this, not for testing or anything. They were made to live, breathe, enjoy sunshine and be free, not be locked up and tortured. I am ashamed to be human. A group of chimpanzees rescued from a laboratory in Austria just got their first dose of fresh air and sunshine in 30 years. Shortly after they were born, these chimps were taken from their mothers and used for experimentation at a pharmaceutical laboratory in Austria. They were exposed to deadly illnesses like HIV and Hepatitis in order to test for possible “cures” and treatments. After a long torturous ordeal they were released to a sanctuary in 1997 but their introduction to fresh air and sunlight had to be slow.

To see daylight for first time in 30 years

This heartbreaking photo captures their first interaction with the outside world. And to think, Ninety-two percent of all drugs that pass animal testing fail the clinical trail phase after they prove ineffective or dangerous to humans. That means that any results that came out of torturing these guys was probably in vain because the likelihood of it working on humans is minuscule.

The torture is over, at least for these lucky few, and their reactions say more about the unethical nature of animal testing than any words ever could (the video was removed from my post).